New high-resolution commercial satellite imagery shows continued excavation of the new nuclear test tunnel (identified earlier this month) at Punggye-ri. Additionally, imagery has identified new activity at the North Portal (formerly known as the West Portal[1]) at a test tunnel under excavation since May 2013. Whether this activity is associated with maintenance or some other purpose remains unclear.

Recent high-resolution commercial satellite imagery provides a more detailed look at the previously identified nuclear test tunnel construction at the new West Portal. A canopy is visible over the entrance to shield against falling debris. Since the mountain face at this location is part of the ravine cut by the stream below, the resulting erosion has likely left the surface layer cracked and relatively weak.

Imagery also shows a mining cart track exiting the tunnel entrance and crossing the bridge before splitting into a pair of tracks on the spoil pile. The steepness of the ravine may have required the North Koreans to establish the spoil pile by first filling in and leveling the ground closest to the buildings, running mining carts over the first set of tracks, and then installing a second set of rails to lay down more spoil and widen the area behind the buildings without blocking the stream. The presence of the mining cart tracks shows that excavation is continuing with no indication of when it will be completed. 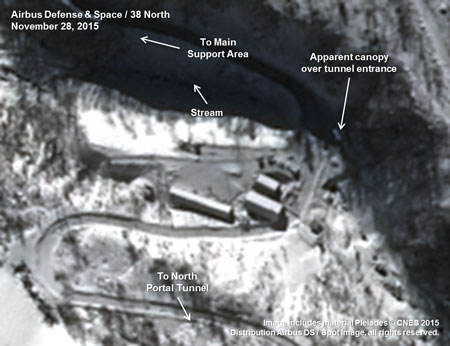 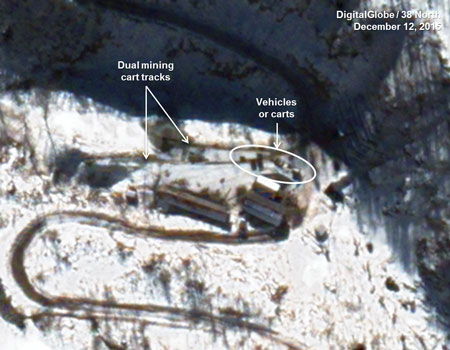 Imagery shows new activity at the spoil pile created by the excavation of a tunnel at the North Portal underway since May 2013. A wide path has been cleared. There also appears to be a patch of disturbed spoil on the pile. Whether that activity is related to maintenance or some other purpose remains unclear at this time. 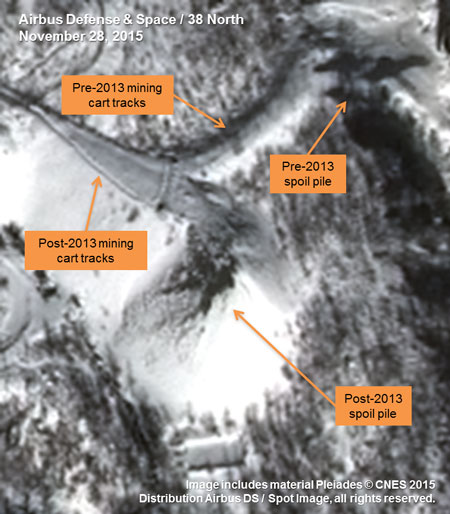 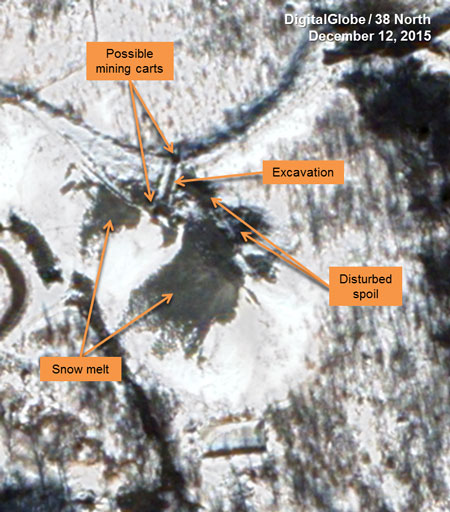 [1] As noted in the 38 North update on Punggye-ri on December 2, 2015, Portal designations have changed to more accurately reflect their locations relative to the Main Support Area. What has previously been termed the West Portal, where the 2009 and 2013 nuclear tests took place, has been renamed the North Portal. The new tunnel excavation site is now called the West Portal. The East Portal, site of the 2006 nuclear test, lies dormant and the low levels of activity continue at the South Portal, where two tunnels are believed to be ready for use. See https://www.38north.org/2015/12/punggye120215/fig1_punggye-15-1202/ for an overview of Portal locations.