Recent news reports citing South Korean intelligence sources state that North Korea is preparing for its fifth nuclear test. Such a reaction to pending United Nations and US sanctions is possible given the North’s past behavior. However, an examination of commercial satellite imagery from late January through early February 2016 reveals few if any signs of test preparations. Regardless, given the recent experience with the January 6 test—namely that North Korea appears to have altered its past test preparation practices in order to make them more difficult to detect—it may well be that the North could conduct another detonation with little or no warning.

Are There Completed Tunnels Ready for a Test?

In the month since North Korea’s last test, there has been little observed activity at the Punggye-ri site. An examination of past imagery suggests that the North may have tunnels already completed and ready for a test should it decide to move forward.

At the North Portal, there may be branches off the primary tunnel that was just used for the fourth test. The last three nuclear tests occurred in this location inside Mt. Mantap probably because the granite has successfully contained radioactive gas leaks.

At the South Portal, the North appears to have excavated tunnels in the period leading up to 2009, when a spoil pile was evident, and then after 2012 when another pile appeared. The exact number of tunnels, or branch tunnels, completed remains unclear.

During September 2015, North Korea began actively excavating a fourth tunnel on the west side of the test site. Excavation appears to have continued at a slow rate and it is judged, by the size of the spoil pile, that this new tunnel is not yet usable for a nuclear test.

If experience is any guide, the January 6 test indicates that the North Koreans can now conduct a nuclear test with little or no advance notice based on imagery observations alone. While detecting nuclear test preparations is, under the best of circumstances, an inexact art, in the North Korean case, it may be the result of careful planning to avoid detection by commercial satellites as they pass overhead or by instituting a practice of gradual, low-key preparations that take place over months—activity almost indistinguishable from construction, tunnel excavation and maintenance.

For example, imagery cannot reveal whether the tunnels are partially sealed with rubble or cement, “stemmed,” during the maintenance or construction phases or whether they are stemmed within the test preparation period. If they are already partially sealed, test preparation can proceed rapidly. They would simply need only to bring in the nuclear test device, prepare it, and do the final sealing—all largely unnoticed.

Recent imagery of the South Portal area from late January through early February shows little or no change or indications of activity.

Figure 1. No activity seen at the South Portal in recent weeks. 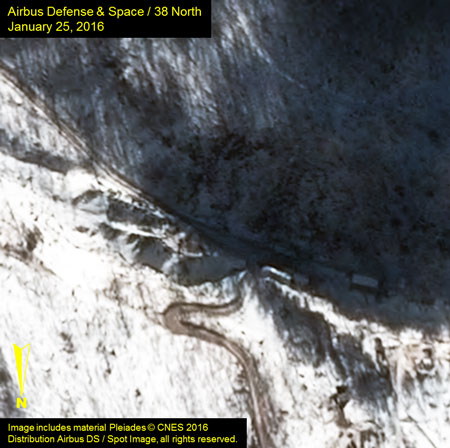 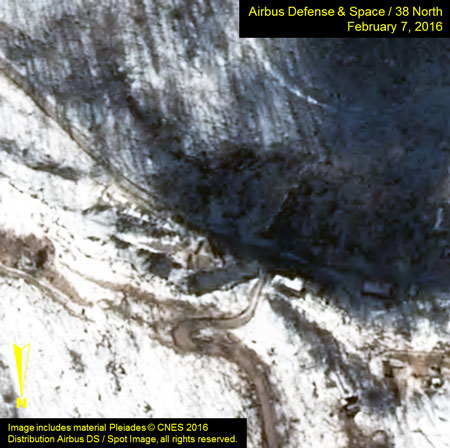 Imagery shows unidentified objects in various locations near the North Portal tunnel entrance. They could be a survey team in the tunnel doing post-January 6 test assessment of what did or did not work, or, if there is a branching tunnel, preparing for another test or sealing the tunnel to prevent radiation leakage. In 2013, they simply dismantled the headworks and buried the entrance to that tunnel. 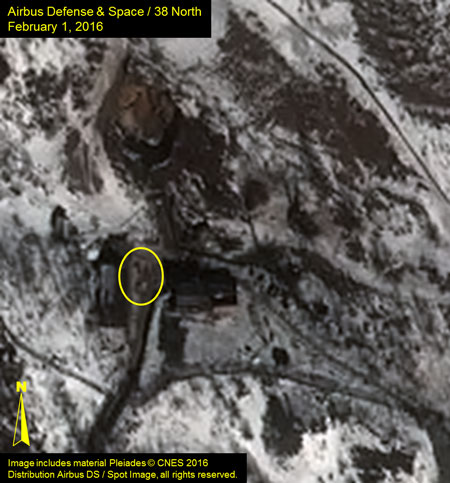 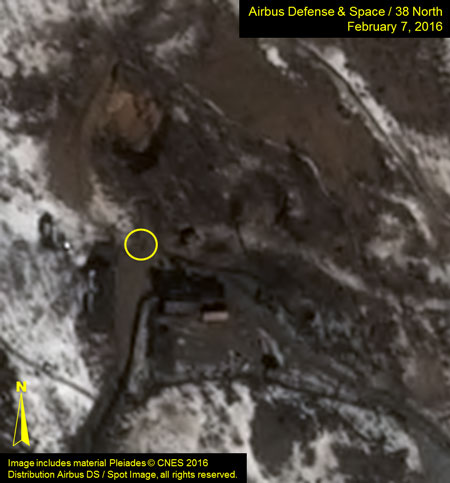 Imagery from late January showed personnel as well as vehicle tracks in the snow while an image from February 1 indicates dark spots that are possibly shadows of crates. By February 7, those objects are no longer present and there are additional vehicle tracks in the snow. The main road in all three images is relatively clear of ice and snow, indicating use. Since the Main Support Area is central to all operations at the site, this activity could be associated with a wide range of operations form maintenance to test preparations.

Figure 3. Movement of objects and personnel seen at the Main Support Area in recent weeks.