Commercial satellite imagery of North Korea’s Punggye-ri Nuclear Test Site from May 5 suggests that Pyongyang may be preparing for a nuclear test in the near future. While the test site continues to show low levels of activity, vehicles have been spotted at what is believed to be the Command Center, located approximately 6 kilometers south of the test site. While the historical record is incomplete, it appears that vehicles are not often seen there except during preparations for a test.

There is a low level of activity with one truck or several small vehicles parked close together (measuring approximately 4.1 m by 2.2 m) 20 meters west of the portal and what appears to be several people immediately outside the portal. The crates or trailers seen in this area in previous imagery are no longer present.

There is no activity of significance (e.g., vehicles, people, etc.). However, the dark area at the top of the spoil pile for the North Portal has grown slightly, suggesting that there has been some recent activity.

No significant activity is observed at the Main Support Area. The vehicle seen in imagery from May 2 is no longer present.

Figure 3. No significant activity at the Main Support Area on May 5.

A small object (measuring approximately 2 meters by 1 meter)—likely a trailer or crate—is present nine meters from the portal.

Figure 4. Small object identified close to the South Portal on May 5.

No vehicles or people were observed moving along the road south of the test facility.

Structures located approximately 6 kilometers south of the test facility are believed to be the Command Center for nuclear tests. While the historical record is incomplete, it appears that vehicles are not often seen here except during preparations for a test. No vehicles or people were observed at this facility on imagery from May 2. However, what appears to be four closely-parked vehicles are present on May 5. 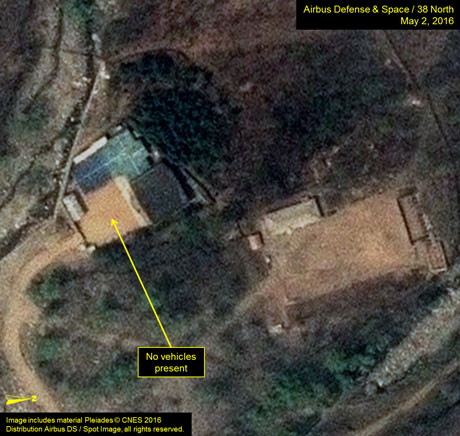 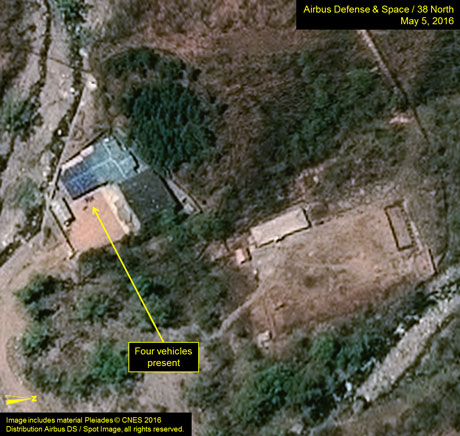