Following North Korea’s fourth nuclear test in January 2016, the United Nations Security Council imposed new sanctions on the DPRK through Resolution (UNSCR) 2270. Considered to be the strongest of all measures imposed to date, these sanctions included a prohibition on the export of coal, iron and iron ore from the DPRK. Some observers believed that such sanctions might represent a new and important form of pressure on Pyongyang, which derives a significant amount of revenue from mining-related exports to China, some of which presumably helps support its ambitious nuclear and missile programs. Others, however, pointed out the exception relating to “livelihood” exports—that is, exports that do not generate revenue for prohibited activities—questioning how this would be interpreted, especially by China. Given this exception, would these sanctions actually result in a significant reduction of exports to China or permit business as usual to continue?

Since the adoption of UNSCR 2270, on the ground reporting has suggested that North Korea continues to export significant amounts of coal, iron and iron ore to China. Daily NK, for example, recently quoted a source in China stating that “Chinese regions facing Musan County in North Korea are teeming with thirty- and forty-ton trucks loaded with iron ore.”

In order to better assess the situation, we examined commercial satellite imagery from Planet, which offers moderate resolution images with a high revisit rate. This included analyzing more than two dozen images from 2015 and 2016 of the Nanping-Chilsong border crossing and the Musan Mine—a large iron ore mine in North Hamgyong Province—to assess whether this trade channel was visibly affected by the new sanctions. Based on the imagery, however, the Musan Mine remains active and traffic between the mine and the border crossing continues.

Figure 1. Overview of Musan City, the Musan mine and the Nanping-Chilsong border crossing.

The Musan mine is extremely large, and spoil from mining operations are dumped in a nearby mountain valley, making it easy to determine whether the mine is active. From the mine, ore is loaded onto trucks that drive to the border crossing between Nanping, China and Chilsong, North Korea (Figure 2), over a bridge spanning the river that forms the border, and into a Chinese customs area in Nanping. Just north of Nanping, there is a railhead and sorting area where the ore is dumped until it can be transported to other locations in China.

Although the area cannot be said to be “teeming” with trucks in any of the images seen in this study, there are clear signs that trade is continuing.[1]

Comparing imagery from September 2015 and August 2016, it is clear that mining operations are ongoing even after the adoption of UNSCR 2270, as evidenced by new and growing spoil piles at the Musan Mine. Imagery also indicates that the Nanping-Chilsong border crossing is still active. There are significant amounts of ore visible at the sorting yard and these piles change shape over time, suggesting that ore is being brought in and shipped out (Figure 3). Finally, vehicles can be seen on the roads in some images (Figure 2) and train cars are visible at the railhead in others (not shown).

Figure 3. Spoil piles at the Musan Mine and activity at the Nanping-Chilsong border crossing. 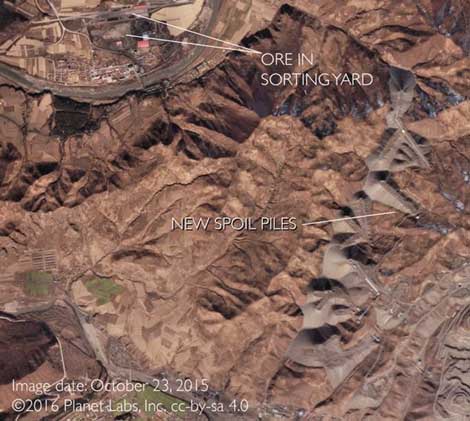 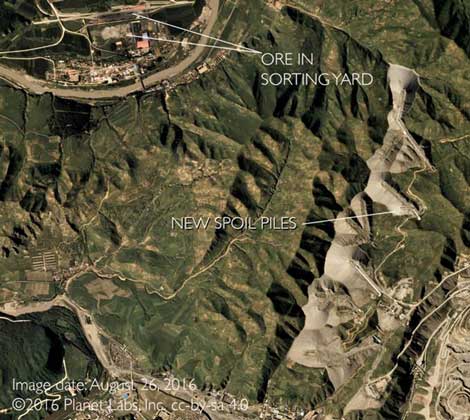 Overall, satellite imagery indicates that the Musan Mine remains active and iron ore continues to be exported to China. It is not possible to estimate whether the total amount of ore is significantly less than in previous years, but it appears that the livelihood exception in UNSCR 2270 has allowed this trade channel to remain open.

Jeffrey Lewis is Director of the East Asia Nonproliferation Program at the James Martin Center for Nonproliferation Studies (CNS), Middlebury Institute of International Studies at Monterey, and a frequent contributor to 38 North.

[1] Only select imagery examined in this study are displayed in this article.