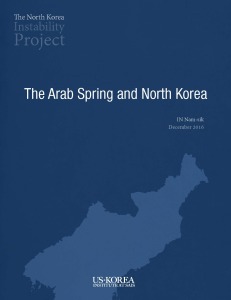 The North Korea Instability Project, conducted by the US-Korea Institute at the Johns Hopkins School of Advanced International Studies, was established in 2016 to examine the issues that could arise from potential instability and collapse of the North Korean regime. This project, through a series of three workshops in 2016-2017, will explore the “worst case scenarios” for a post-collapse North Korea—such as an insurgency against stabilizing forces, theft and diversion of nuclear and missile technology or a regional civil war—and explore possible measures for avoiding these outcomes.

The first of three workshops, held in June 2016 was attended by a diverse group of experts familiar with insurgency and counter-insurgency operations, US military strategy on the Korean peninsula, nuclear and ballistic missile technology, North Korean politics and Pyongyang’s WMD and conventional military capabilities.

This first report of The North Korea Instability Project examines the causes and consequences of the Arab Spring popular revolutions and discusses their relevance to and implications for North Korea.

Download the report “The Arab Spring and North Korea,” by IN Nam-sik.