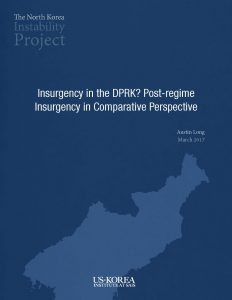 Instability in the DPRK could have many sources, ranging from internal political strife to economic collapse to a renewal of intense armed conflict with the ROK and its allies. Regardless of origin, instability could lead to the collapse of the regime, which could in turn open the door to potential civil war inside the DPRK as well as resistance to an intervention seeking to reunify the Korean peninsula. Politicians and military planners alike must take seriously the possibility of insurgency in any state following rapid and violent governmental change.

Yet all states are not created equal in terms of the potential for insurgency. This paper uses a comparative approach to assess the likelihood of a serious insurgency and/or civil violence in the DPRK following a hypothetical collapse of the state. It proceeds in two main parts. First, it outlines the factors correlated with and seemingly contributing to the origin of insurgency in previous post-regime environments. The focus is heavily but not exclusively on Iraq, as Saddam Hussein’s Ba’ath regime and the Kim regime have a number of similarities (though significant differences as well). Second, it briefly evaluates the DPRK in terms of these factors to determine how serious the possibility of insurgency is in a post-regime context. This analysis concludes the DPRK is ripe for a well-armed and virulent insurgency following the end of the current regime.

Download the report “Insurgency in the DPRK? Post-regime Insurgency in Comparative Perspective” by Austin Long.