New commercial satellite imagery of the Punggye-ri Nuclear Test Site from March 28 shows a heightened level of activity over the past few days. Despite the recent snowfall, there has been continued pumping of water out of the North Portal, presumably to keep the tunnels dry for communications and monitoring equipment; the removal of material (probably rubble) and dumping on the tailings pile immediately to the east of the portal; and the probable removal of one or more vehicles or equipment trailers from in front of the portal.

This activity is consistent with previous reports, while the rest of the Punggye-ri Nuclear Test Site has been generally quiet. However, there is now one vehicle and a large contingent (70-100) of people standing in formation or watching in the courtyard of the Main Administrative Area. Such a gathering hasn’t been seen since January 4, 2013, which was followed by a nuclear test on February 12.

Figure 3. Formations seen in the Main Administrative Area, similar to what was seen in lead up to 2013 nuclear test. 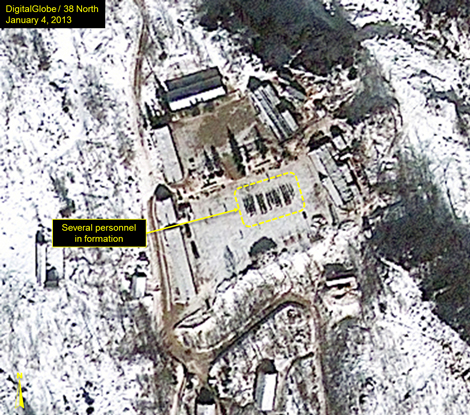 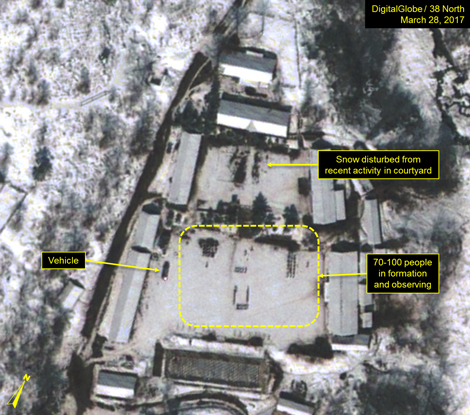 The North Koreans know when commercial satellites are passing overhead and typically try to avoid activities during that time. The fact these formations can be seen suggests that Pyongyang is sending a political message that the sixth nuclear test will be conducted soon. Alternatively, it may be engaged in a well-planned game of brinkmanship.