On Sunday, May 21, 2017, North Korea conducted the second test launch of its “Pukguksong-2, solid-fuel missile,” a land-based version of the KN-11 Pukguksong-1 submarine-launched ballistic missile (SLBM). However, as was the case for the February test of the Pukguksong-2, Sunday’s test was not conducted from the reported location, but apparently from Lake Yonphung (sometimes spelled Yonpung).[1]

According to an initial South Korean Joint Chiefs of Staff (JCS) statement, “North Korea fired an unidentified ballistic missile in the eastern direction at around 4:59 p.m.[2] from the vicinity of Pukchang in Pyeongannam-do (South Pyeongan Province).” Moreover, “it traveled at the maximum altitude of around 560 km” before falling back into the East Sea more than 500 kilometers away.

Pukchang is a county in South Pyeongan (Pyongan) Province located north east of the capital city, Pyongyang. However, when North Korea released still and video imagery of the launch, it was clear that the launch site was near a lake surrounded by wooded hills near a tree-lined paved road. A search of Pukchang County on Google Earth revealed no such lake or reservoir in that county. Closer inspection of images that were taken from the missile in flight looking back at North Korea revealed what appeared to be a small residual exhaust plume in an area west of and outside of Pukchang County, on the eastern border of Anju County, no less than 20 kilometers from the closest Pukchang County boundary.

A search of Google Earth imagery of that area not only revealed a lake—Lake Yonphung—that exhibited all of the features of the one shown in the ground photos and videos near the launch site, but also provided excellent correlation with the features specific to that site. The nearest village is Ryonghwa-ri, located approximately six kilometers to the northwest.

The use of Lake Yonphung as a launch site is an interesting choice, as no missile launches have ever been conducted form this location. In fact, the launch was conducted less than two kilometers from an elaborate DPRK leadership lakefront villa complex and the lake is off limits to the North Korean populace.

By using this site, North Korea’s Strategic Forces demonstrated their ability to operate from anywhere in the country, not just fixed launch positions. Such activities also build operational experience and unit capabilities with the system, while indicating an evolving military doctrine. It is interesting to note that the Pukguksong-2 has only been tested within 75 km of known missile facilities and the No. 9 Factory. It is unclear if this is related to operational basing or if the system and its tracked transporter-erector-launcher (TEL) are still in a development stage.

Figure 1. Video frame captures from video of “warhead” in flight looking back at North Korea.

Figures 2. Close-up of one video frame capture overlaid on Google Earth compared with the normal Google Earth image, providing the basis for identification of the Pukguksong-2 launch site. 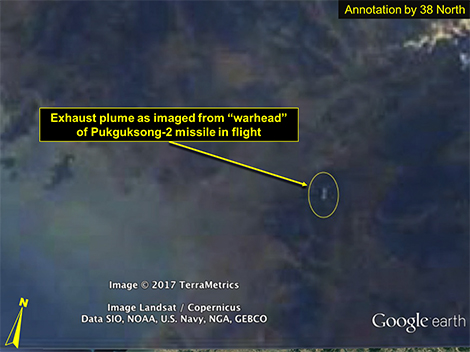 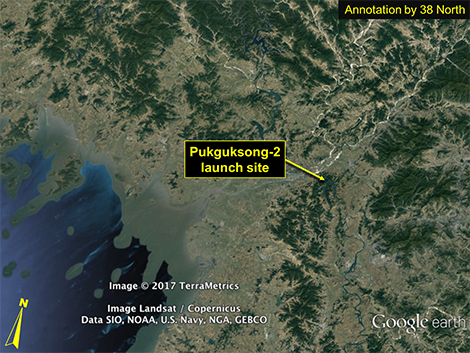 Figure 3. Perspective view of identified Pukguksong-2 launch site on Google Earth based on correlation with all the features provided in North Korean ground photos and videos.

Figure 4. An example of the excellent correlation between a ground photo of the launch of Pukguksong-2 (with the lake and topography in background) and a simulated horizon using Google Earth “ground-level view,” looking from the identified launch location to the southeast.

Figures 5. The Pukguksong-2 TEL arriving at the launch site driving along a tree-lined paved road. 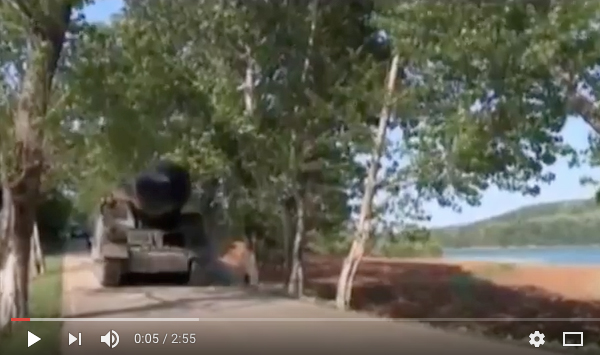 [1] While the geolocation of the test site was reported via twitter by Aldin Abazovic on May 22 (https://twitter.com/CT_operative/status/866619394549579776/photo/1), 38 North analysts came to this conclusion independently using comparison of the exhaust plume and Google Earth imagery.