Commercial satellite imagery of the Punggye-ri Nuclear Test Site from May 2 and 3 indicates a low level of activity continues around the North Portal, the tunnel where test preparations have been observed over the past few weeks. Additionally, what appears to be disruptive pattern camouflage paint has been added to the roofs of the Command Center buildings, which might be an attempt to reduce foreign capabilities to observe and monitor activities at the site from overhead, as well as prevent some key buildings from being easily recognized. This type of activity has been used at the nuclear test site before, most notably at the Main Administrative Area buildings in 2011.

Satellite imagery from May 2 and 3 indicates little activity at the North Portal. Although it appears that water is still being pumped out of the portal, which helps to maintain optimal conditions for instrumentation and stemming, the rest of this area is relatively quiet compared to the past few weeks. There was one possible rail cart out on the spoil pile on May 2, but no other vehicles were present.

Figure 1. Some activity continues at the North Portal.

In the Main Administrative Area, no personnel are present, as in previous updates; only a dark-toned vehicle is noted on May 3, which was not present on May 2, the purpose of which is unclear. No new activity is discernible at either the South or West Portals, and there are no vehicles or personnel in view on either day in those areas. There were also no vehicles observed on the road between the Portals Area and the Command Center.

Figure 3. Minimal activity seen at the Main Administrative Area, though a vehicle is observed on May 3. 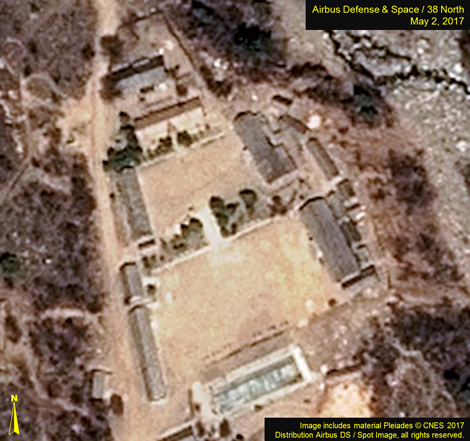 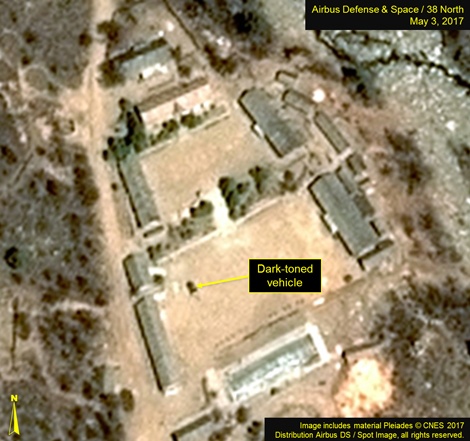 Roofs Repainted at the Command Center

The Command Center, located six kilometers south of the Portals Area, while relatively quiet, has undergone a noticeable transformation. Disruptive pattern camouflage paint has been newly applied to the roofs of the two larger of the three main buildings in the Center. The purpose of disruptive pattern camouflage is to break up the outlines of the buildings with a strongly contrasting pattern as a form of passive defense against overhead identification and targeting in the event of a military aerial attack.

Within the Command Center, there is now evidence that the smallest building (constructed as an extension of the middle building, which originally likely served as a VIP villa) had its roof painted with a dual-purpose disruptive pattern paint; in natural color view, it was largely bluish but the paint also incorporated spectral mimicking to help the roof blend in with surrounding vegetation when viewed on color-infrared imagery.

Figure 4. Disruptive patterning camouflage paint was applied to the roof of the Command Center sometime between April 25 and May 2.

Figure 5. The smaller building’s roof was painted with dual-purpose disruptive paint, that mimics natural vegetation when viewed in color-infrared imagery. 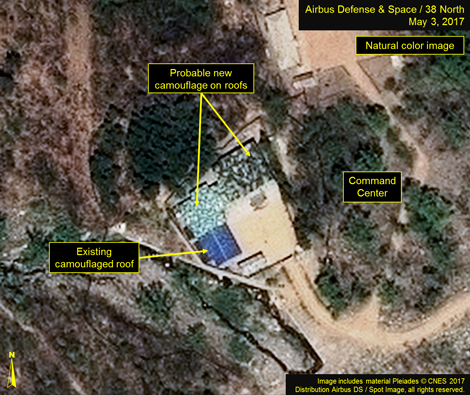 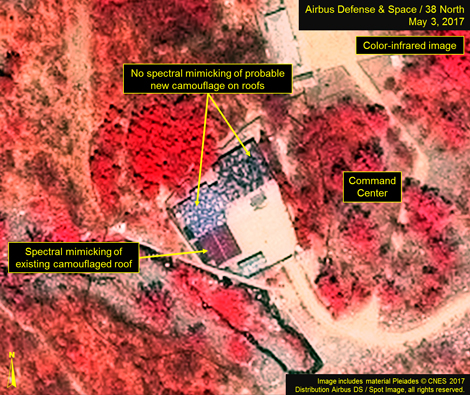 It should also be noted that this effort builds on previous use of camouflage at the Punggye-ri Nuclear Test Site. Disruptive pattern camouflage paint had first been applied to the roofs of all the buildings in the Main Administrative Area by 2011 as can be seen on Google Earth historical imagery, but that paint has substantially faded since then. Camouflage netting has also been observed intermittently within the Portals Area of the site dating back to the time of the first test in October 2006.[1]

Figure 6. Similar disruptive patterning paint was used on building at the Main Administrative Area in 2011.

While it is perhaps too soon to determine the extent to which North Korea has, or will, change its historical pattern of activity at the test site, the renewed effort to employ disruptive pattern camouflage for passive defense at the Command Center at least suggests that North Korea is responding to a heightened sensitivity to overhead observation and monitoring and is attempting to make that more difficult (if not just to provide a new distraction).

As before, on the basis of the analysis of satellite imagery alone, it is unclear if such activity indicates that a nuclear test has been cancelled, the facility is in stand-by mode, or that a test is imminent.