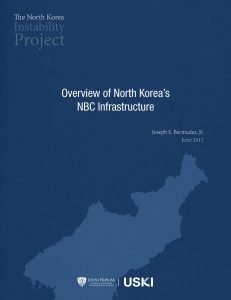 During the past 40+ years North Korea has consistently pursued expanding its nuclear, biological and chemical (NBC) programs with impressive single-mindedness and determination, and fully in line with its national philosophy of juche (self-sufficiency). Available information indicates that North Korea: possesses—or will soon possess—operational nuclear weapons and continues to develop such weapons; possesses an ongoing offensive biological weapons research program, may possess an inventory of these weapons and continues to conduct research into new capabilities; and possesses a longstanding chemical weapons program with a militarily significant inventory of such weapons, and continues to conduct research into more advanced chemical weapons.

To achieve its current level of technology and proficiency, North Korea has overcome numerous and significant obstacles to develop extensive diversified infrastructures to conduct NBC research and development, testing and weapons production. An understanding of these infrastructures is essential in mitigating NBC weapons usage during periods of instability, preventing onward proliferation and in planning and conducting operations to locate, secure and eliminate NBC capabilities when the need arises.