China’s energy cooperation with North Korea continues despite irritations in the bilateral relationship, including sanctions. The most significant “new” energy cooperation project between the two countries is the construction of two additional power plants on the Amnok/Yalu River, bordering North Korea’s Jagang Province and China’s Jilin Province. Discussions and planning for the dams began in 2004, but according to Chinese media, actual construction was not authorized until 2010. In January of that year, the two countries held the “Ninth Meeting on Sino-North Korean Construction of Yalu River Dams at Wangjianglou and Wenbing” and agreed to construct two power plants, each capable of producing 154 million kilowatt-hours per year. A groundbreaking ceremony was held on March 31, 2010.

Figure 1. Locations of the four “original” power plants along the Amnok/Yalu River.

The scale of the two new power plants, known in Korean as the Rimtho (림토) and Munak (문악) Power Stations, is relatively small compared to the incumbent power plants. Despite their size, however, progress on construction has been slow and fitful. The construction delay probably has less to do with bilateral political considerations than more mundane commercial, technical, financial and material constraints on both sides of the border.

Figure 2. Locations of the two new power plants along the Amnok/Yalu River.

It is still too early to determine exactly how this new electricity will be used. However, by analyzing the observable existing power grid, it is likely that the power will be linked most directly with Manpho City and the provincial capital Kanggye, with perhaps some going as far as Chongjin.

Figure 3. The new power plants in relation to the cities of Manpho and Kanggye.

Jagang Province remains the most isolated province in North Korea. Western tourists and diplomats are still barred from traveling there, and Kanggye is the only provincial capital in the North that western tourists have not yet been allowed to visit. The closed nature of the province is due to a heavy concentration of military factories, particularly along the paved highway linking Kanggye to Huichon. It is likely that some power from existing and new energy cooperation projects will be diverted to North Korea’s military at facilities such as the Kanggye Tractor Factory. Such actions could be considered in violation of international sanctions. However, those links will be difficult to prove, especially since the power stations will serve a very real civilian need.

Manpho City has greater economic potential as a cross-border trade hub and tourism destination (like Sinuiju). It has received a small number of Chinese tourists and will soon enjoy a new vehicle border crossing with Jian, China. The free trade zone in Jian has been constructed and when open will give the North Koreans a new source of revenue and economic stimulus in the remote border city. North Korea also announced a special economic zone here in 2013, but no visible progress has been made on it.

Using Google Earth and Planet imagery, it is possible to track the progress made in building these two new projects.

Nearly three years after signing the agreement, the North Koreans were the first to begin construction on the Munak Power Station (named after a nearby railway station) 11.5 kilometers northeast of central Manpho City. This project began in 2013 with the building of a construction workers’ village and the initial grading for a cofferdam (a temporary watertight enclosure to permit construction work below the waterline) from the North Korean side of the river. By the end of the year, the cofferdam was in place and extended two-thirds across the river, but had yet to be drained. 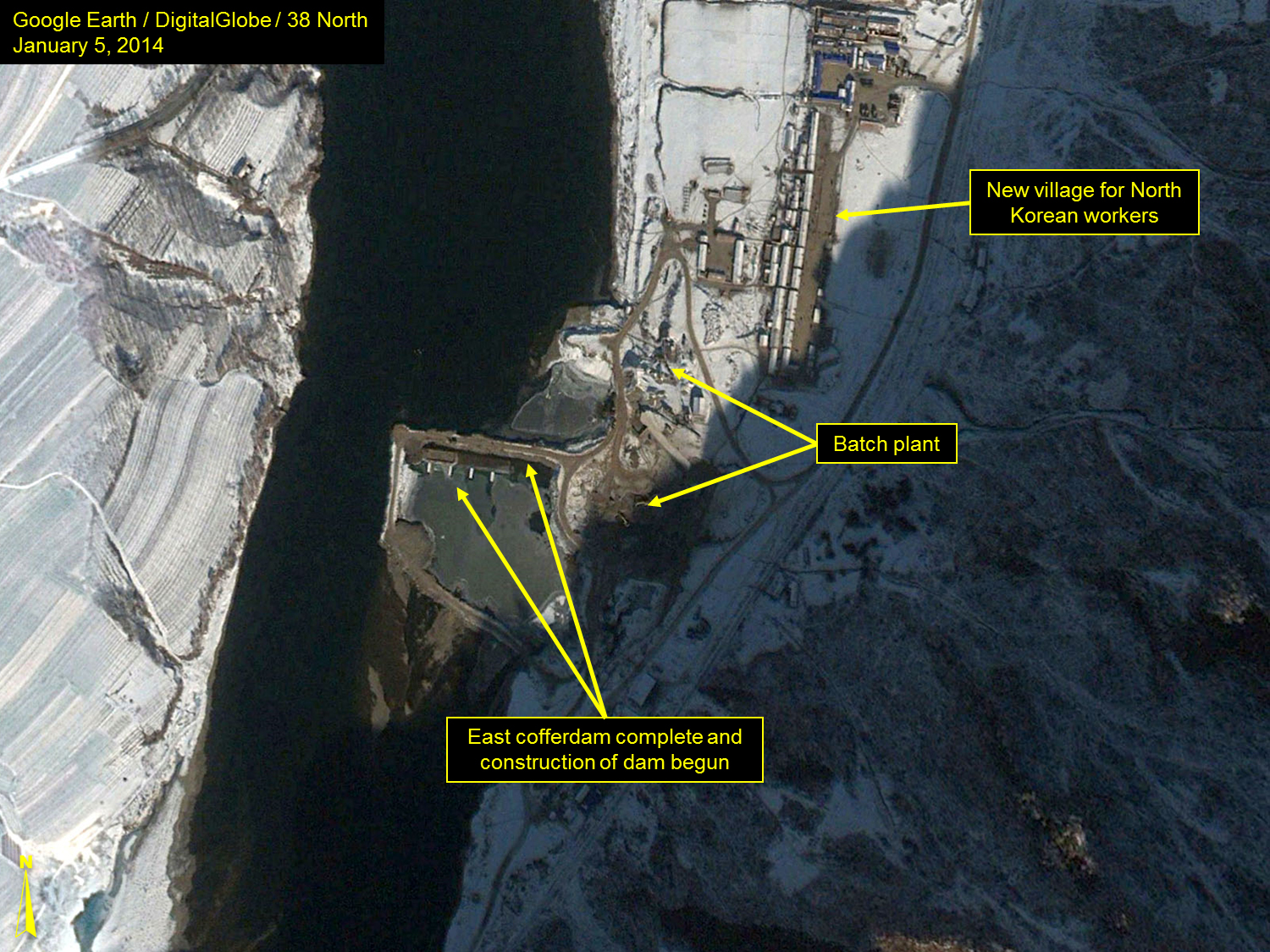 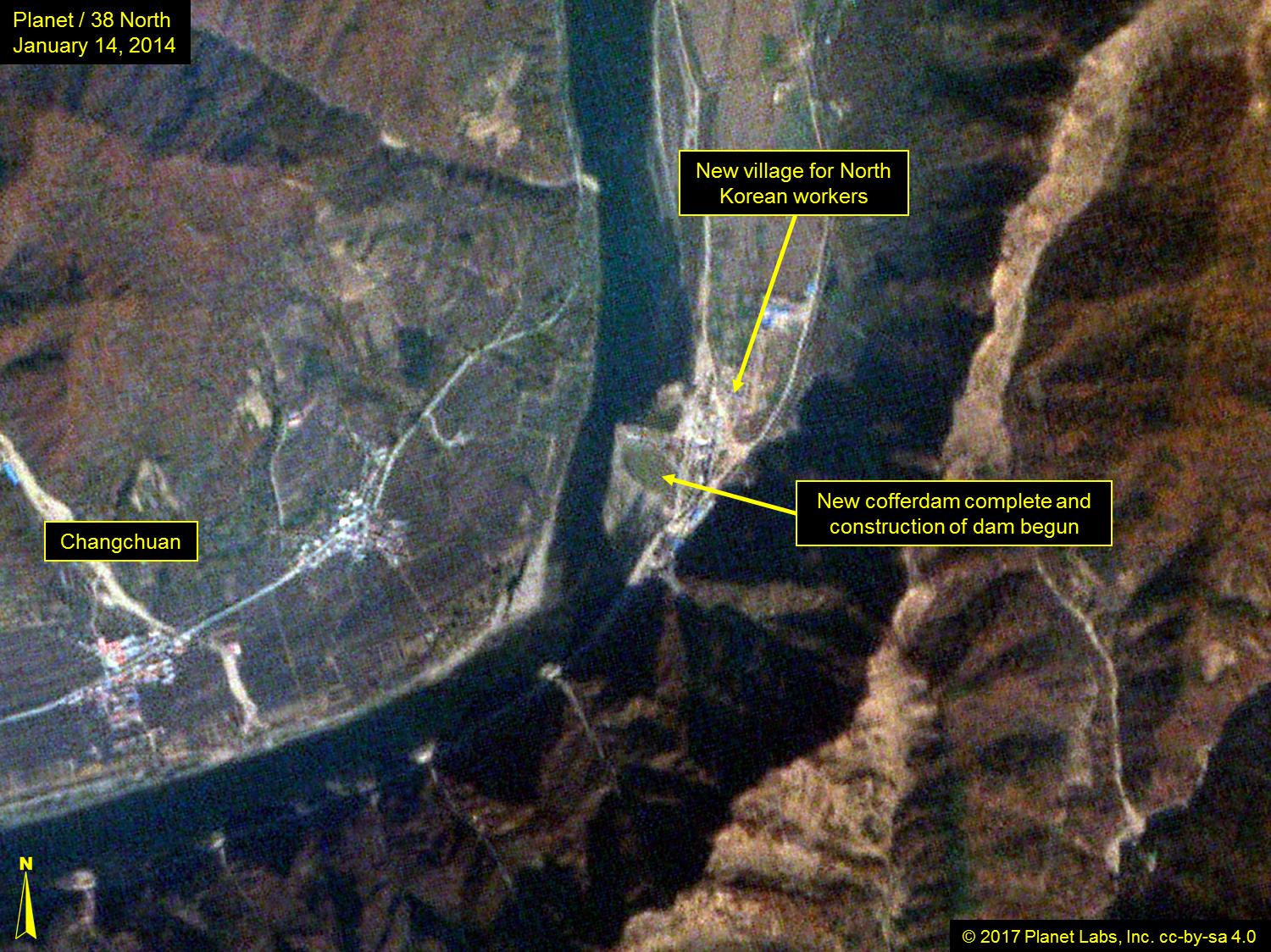 Work proceeded slowly in 2013. By fall, however, the cofferdam had been drained and the pouring of concrete foundations for the new dam had begun. By October 2014, the towers for the eastern section of the dam were completed, and work on the power plant building and spillway continued.

In April 2015, a second cofferdam was erected in the center of the river but not drained. A temporary pontoon bridge was also installed from the North Korean bank to allow workers to access the cofferdam. Concurrently, the original cofferdam was being removed and water was being allowed through already completed sections of the dam.

By January 2016, however, a third cofferdam extending from the Chinese shore had been connected with the second cofferdam, forming a large drained working area. The remains of the original cofferdam had been completely removed. A second pontoon bridge was erected which extended across the river, allowing access to both sides of the dam. The following month, work on preparing the footings for the new dam began.

Figure 8. West section of dam near completion and work continues on the power plant in October 2016.

Imagery from March through May 2017 shows that the western half of the dam is complete, its cofferdam is being removed and water is entering and the pontoon bridges remain in place. The power plant building is externally complete and the spillway remains empty of water. Should construction continue at its current pace, the Munak Power Station could be completed by mid-2019. The question of when it could start generating electricity is challenging to estimate as it is unknown if the water turbines have been installed. Additionally, the supporting power station and distribution network required to carry the electricity to either country have not been installed.

Approximately five years after the authorizing agreement was signed in 2010, construction of the Rimtho Power Station (named after nearby North Korean railway station) and dam began on the Chinese side of the Amnok/Yalu River. The site chosen for this project is approximately 11 kilometers upstream (northeast) of the Munak site and 24 kilometers downstream of the existing Unbong Power Station Dam.

Preparatory survey work for the new dam was first observed in mid-2014 when six 40-meter-long temporary construction buildings were erected on the north shore of the Yalu. A year later, the Chinese constructed, from their side of the river, a temporary pontoon bridge and an adjacent reinforced crossing point at Wangjianglou. Subsequently, 500 meters further downstream and on the North Korean side, excavation of a cofferdam was started.

Figure 11. Construction of dam foundations continued in May. 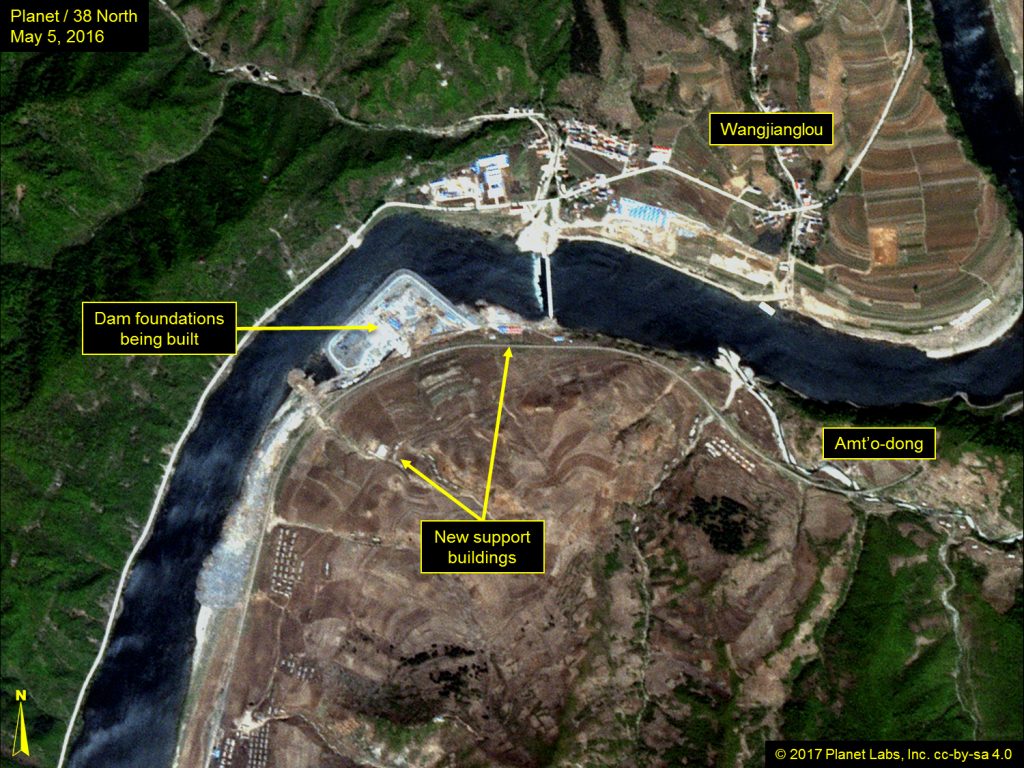 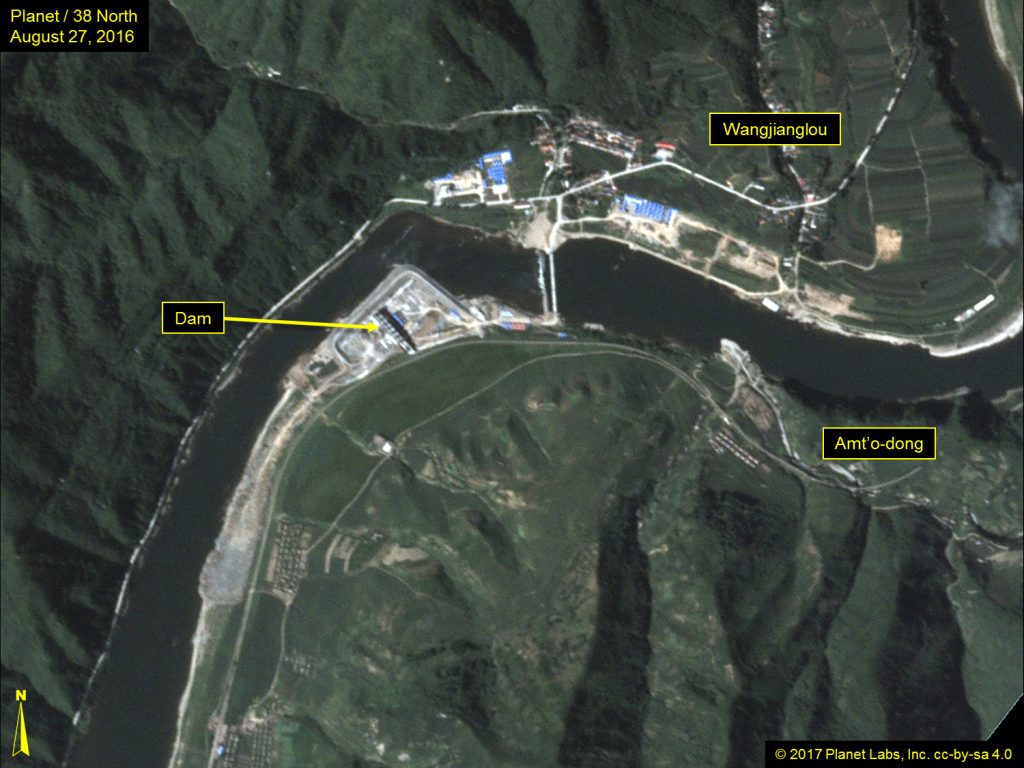 Work was completed by September. The following month, the upstream side of the cofferdam was removed and water allowed to flow through it. Accompanying this, construction began on a second cofferdam enclosing the northern half of the river. By the end of October, this was complete and ready for draining.

Imagery from March through May 2017 indicates that the temporary pontoon bridge upstream of the dam has been removed, the western cofferdam is drained and construction of the power plant is underway. There is no evidence of a spillway or construction of a power distribution network. Should construction of the Rimtho Power Station continue at its current pace, it could be completed during 2019-2020. However, it is too early to estimate when it could begin producing electricity.

Figure 13. Cofferdam pumped out and power plant construction underway in May 2017.