Recently declassified information on the responses of the South Korean and US governments to the uprising in the southwestern city of Gwangju in 1980 and North Korea’s reaction to those events underscore two critical lessons that the Trump administration is hopefully learning during the nuclear standoff with Kim Jong Un.

On May 28, 1980, American and North Korean military officials met at the Panmunjom Truce Village on the Demilitarized Zone (DMZ). The timing was propitious: just 24 hours earlier, the ROK Army, with full US approval, had rolled into Gwangju to end the first violent rebellion in South Korea since 1953. Dozens of citizens who had taken up arms against the martial law forces of Lt. General Chun Doo-hwan had been killed in the assault, adding to a death toll of several hundred.

Because of the intense press controls imposed by Chun’s martial law command at the time, few in South Korea had any inkling about what had happened. But the North Koreans knew, and they had plenty to say about it, according to a declassified Central Intelligence Agency (CIA) summary of the meeting that was sent to Secretary of State Edmund Muskie and other senior US officials.

“Don’t you think it is about time for the US government to reevaluate its aid policy to South Korea?” the North Koreans asked their American counterparts. The United States, they insisted, “should have prohibited” Chun from using troops in Gwangju “so as to prevent needless bloodshed.” Apparently taken aback, one of the US officials asked if they “were aware” of recent comments made by Chinese Prime Minister Hua Guofeng about the situation in South Korea. 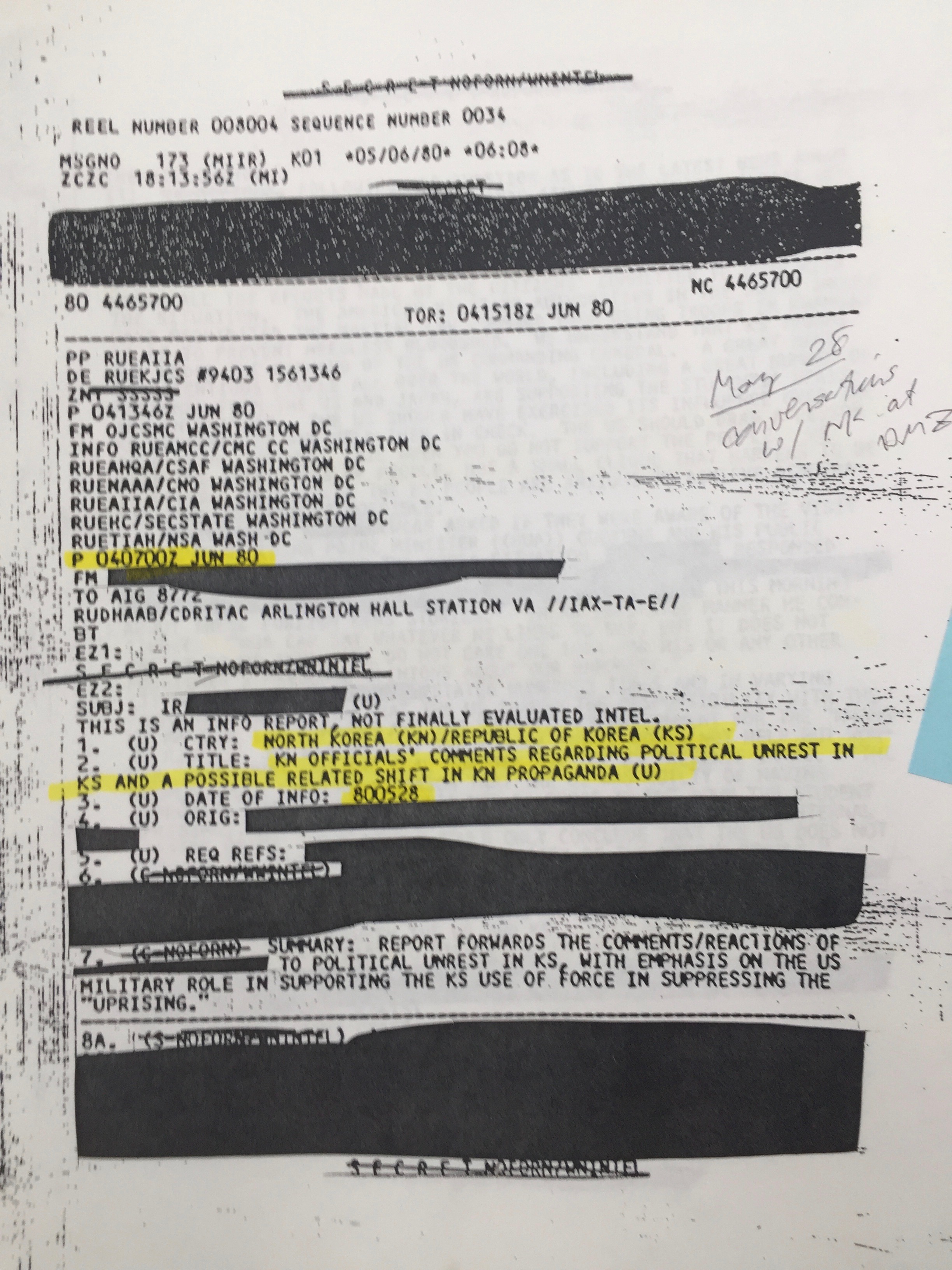 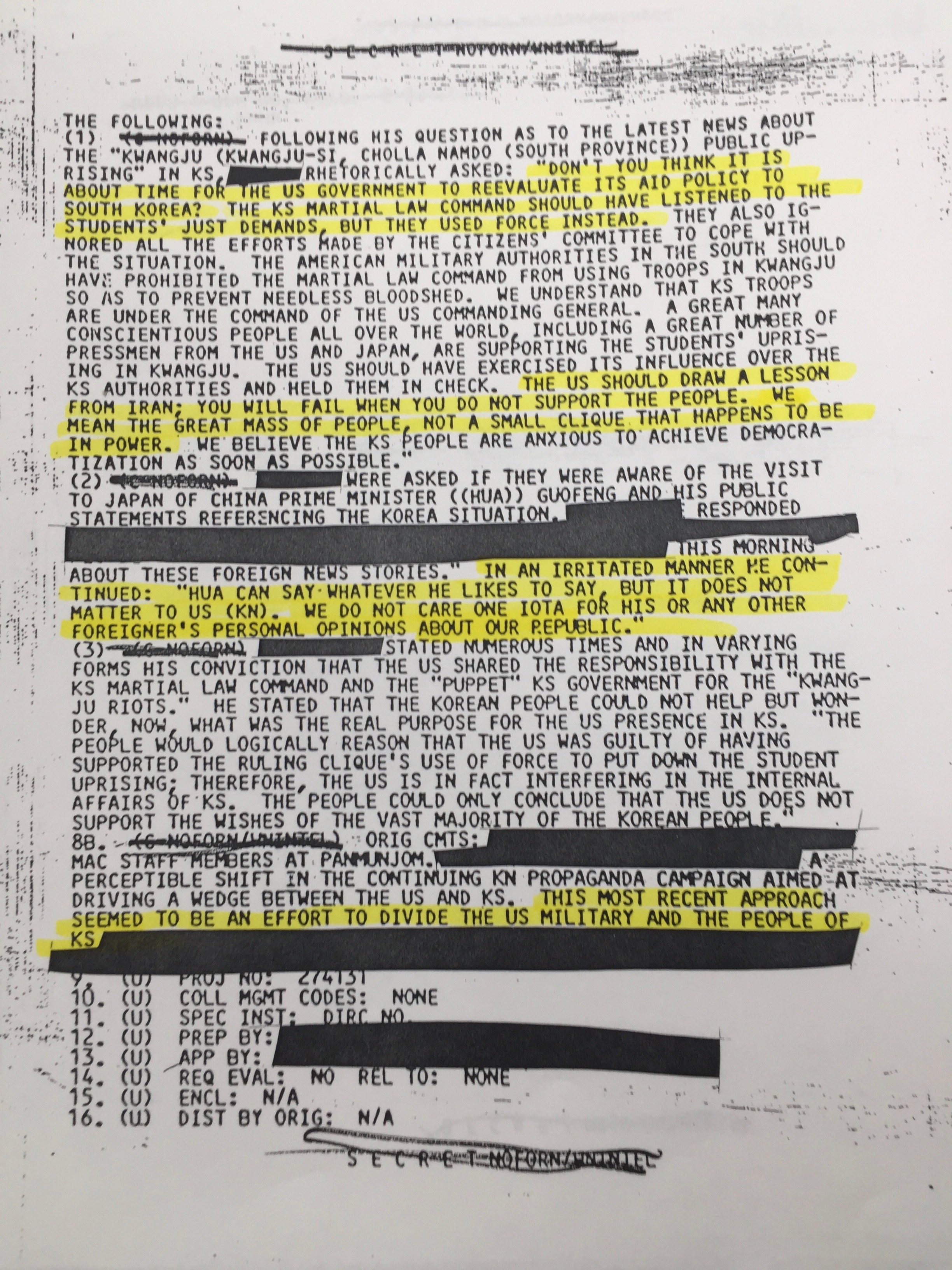 The initial response is blacked out in the cable, one of several thousand documents I obtained about the US role in Gwangju under the Freedom of Information Act. But the rest of his answer is clear. Talking in “an irritated manner,” the North Korean officer seemed to spit out his words. “Hua can say whatever he likes to say, but it does not matter to us (KN),” he said. “We do not care one iota for his or any other foreigner’s personal opinions about our Republic.” Discussion over.

The CIA cable, along with several other documents that analyze North Korean policy and actions in the crucial year of 1980, is now relevant because Gwangju has suddenly been thrust back into South Korean consciousness in a major way. The most popular movie today in South Korea is “A Taxi Driver,” the true story of Jurgen Hinzpeter, the late German photo-journalist who captured the first images of Chun’s attack on the citizens of Gwangju with help from a Seoul taxi driver. The film has been seen by over 12 million people, making it the nation’s 10th most popular film, and got a major boost on August 13 after a public showing for President Moon Jae-in and Edeltraut Brahmstaedt, Hinzpeter’s widow (he died in 2016). It will be South Korea’s nomination for best foreign film at next year’s Oscars and has brought the story of Gwangju to a global audience.

With the film’s recounting of the massacre seared into the public’s mind, Moon recently ordered a government investigation into who ordered Chun’s martial law army to shoot protesters in Gwangju. His announcement had been expected since May 18, when the president spoke movingly at the national commemorations of the uprising at Gwangju’s cemetery in the hilly outskirts of the city (I was in the audience as a guest of the city). “The truth of Gwangju is a rage I cannot ignore,” he declared.

As he did in his early campaign stops in the city, Moon joined local citizens in singing the “March of the Beloved,” the famous tribute to the fallen democratic fighters of Gwangju. Under the probe he ordered, the Ministry of Defense said this week it will investigate reports that soldiers were ordered to fire on protestors from helicopters and that Chun and the martial law command had readied fighter jets to Gwangju to support their crackdown.

The North Korean connection to Gwangju is crucial because, under the conservative administrations of Moon’s predecessors, Lee Myung-bak and Park Geun-hye, right-wingers have attempted to diminish the uprising’s significance. These groups, and Chun himself, charge that the rebellion was secretly organized by North Korean military officers and was therefore a communist-backed uprising that deserved to be put down with force.

This theory is spread by rightist groups who claim to have photographic evidence of North Korean military officers who infiltrated the citizen’s army that fought Chun’s martial law forces (this claim has been debunked by reporters and researchers who have identified the “North Koreans” as locals). Another ludicrous claim is that the Anthem, which is sung with such gusto in Gwangju, is a pro-North Korean tribute to Kim Il Sung (by embracing the song, President Moon has effectively put that one to rest).

Even though these smears have largely been debunked, they remain a painful reminder to Gwangju of the divisions that wracked the country in 1980. In this context, the US documents of this period are important—and may even help resolve some of the issues being raised in the government’s investigation of one of the great tragedies of Korean history.

One of the more intriguing documents in my FOIA collection is a CIA report about a “secret meeting” chaired by North Korean leader Kim Il Sung at his presidential mansion in Pyongyang on May 19, 1980, the second day of the uprising in Gwangju. Its purpose, according to the CIA, was to discuss “KN actions” in connection with the rebellion—in other words, to debate whether the Korean People’s Army should intervene or not. Unless the CIA had a human source within Kim’s inner circle (unlikely), the intelligence was probably obtained from electronic intercepts. That conclusion is strengthened by notations on the cable showing it was sent by the US Army’s Intelligence and Security Command—which operated many of the National Security Agency’s listening posts around the world—and received by INSCOM’s famous Arlington Hill Station in northern Virginia. 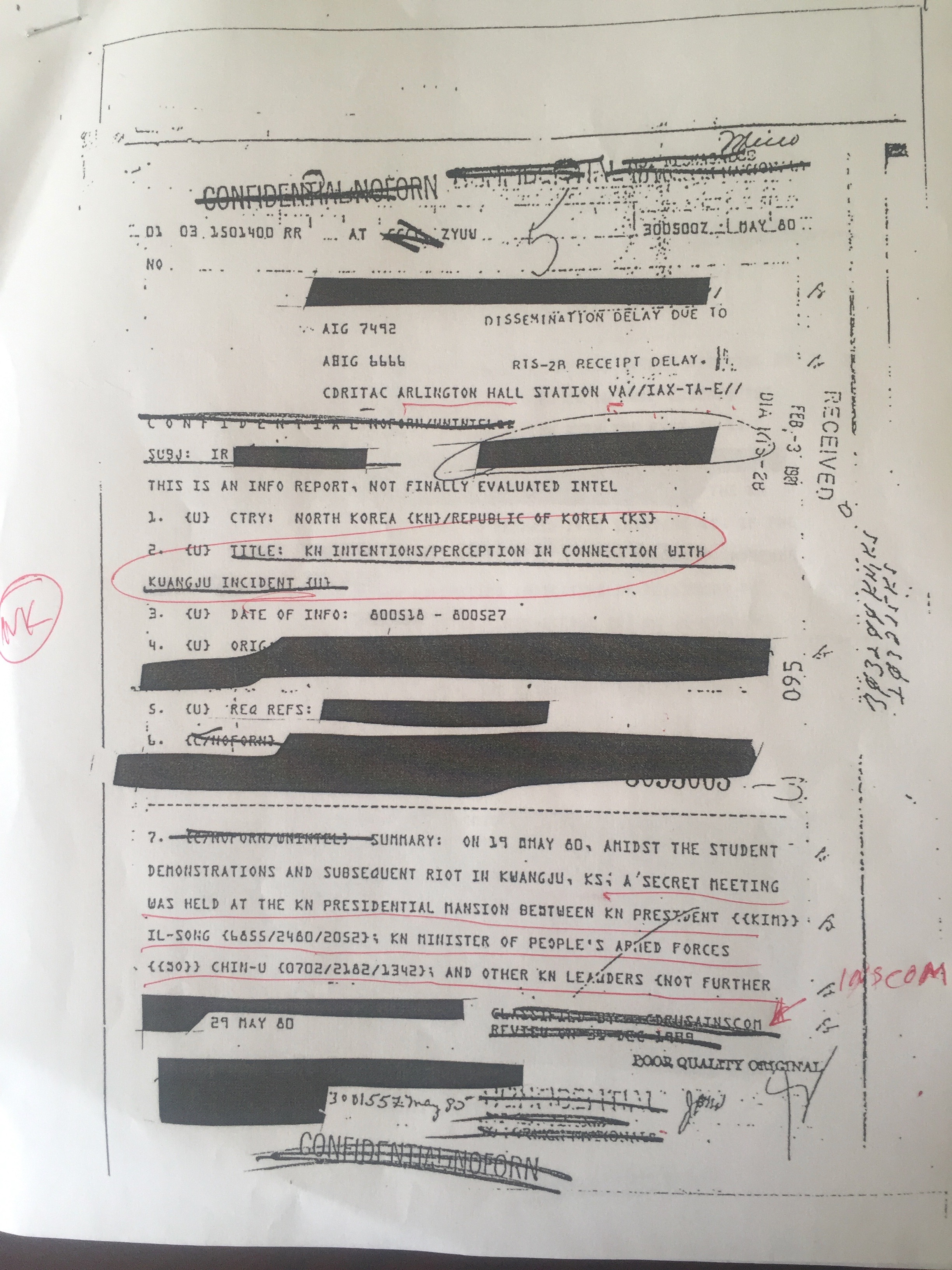 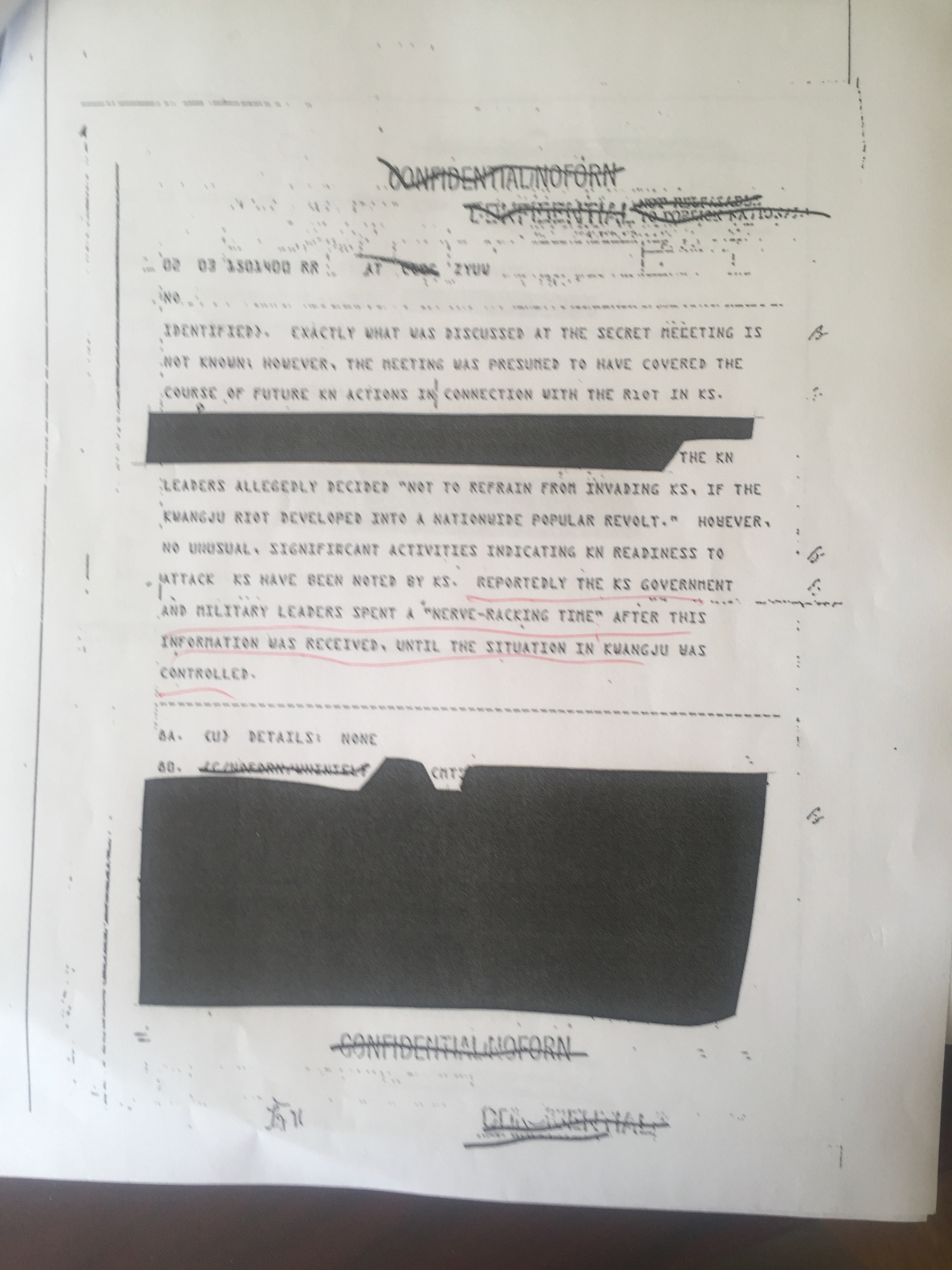 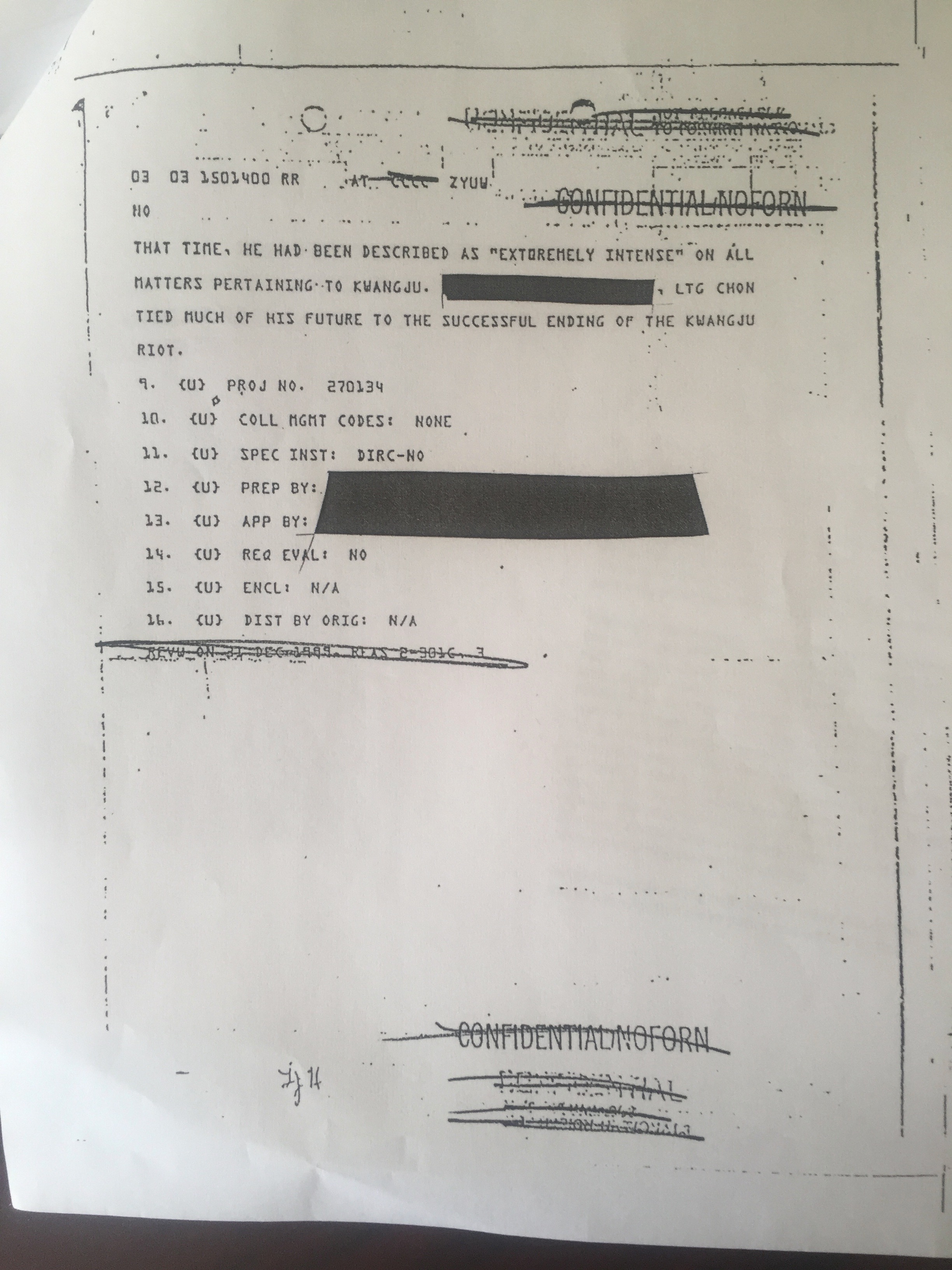 At the meeting, which was said to include the “KN Minister of [the] People’s Armed Forces Chin-U and other KN leaders,” Kim and his advisers allegedly decided “not to refrain from invading KS, if the Kwangju riot developed into a nationwide popular revolt.” That is, they would enter the fight if South Korea was engulfed in revolution, but otherwise would remain neutral. “However,” the cable adds, “no unusual, significant activities indicating KN readiness to attack KS have been noted by KS.” These claims would seem to repudiate any notion that the uprising was “organized” by North Korea, as claimed today by Chun and his right-wing allies; but if true, they indicate an intent by the DPRK to intervene later if the Gwangju rebellion turned into a full-fledged insurrection of national proportions (which it decidedly did not).

The fact that US officials understood that Gwangju was an indigenous uprising is strengthened by the notes of a high-level meeting held at CIA headquarters on May 23, 1980, and described in a declassified report the agency included in its “CREST” database of intelligence reports brought on line earlier this year. The meeting was chaired by Frank Carlucci, the CIA’s deputy director, and begins with an analysis of North Korean intentions from Richard Lehman, who was famous inside the CIA for developing and delivering daily intelligence briefings to presidents from JFK to Reagan.

Undoubtedly aware of the SIGINT (signals intelligence) on Kim Il Sung and his “secret meeting” in Pyongyang, Lehman reminded Carlucci that he had advised CIA in the fall of 1979 that, if the ROK government lost control, “chances are better than even that North Korea will intervene.” But regarding the current situation, he insisted: “there are no signs of anything untoward underway in North Korea” while noting that the CIA is “remaining alert to the situation.” (I cited this document in an interview last April for a South Korean documentary produced by the Seoul Broadcasting System on the North Korean connection).

Other cables further repudiate Chun’s claims of North Korean involvement. A Defense Intelligence Agency (DIA) report dated June 5, 1980, and based on unnamed sources within the South Korean military, made the startling claim that some 2,000 people in the Gwangju area had “secured arms and made their way into the wilds” after the uprising was put down on May 27. While participants in the rebellion have denied any such movement in Gwangju’s nearby mountains, which were heavily patrolled by the ROK Army, they point with pride to the DIA’s observations that “the motivation to go into the hills was not communist inspired,” and that “the rebels…are truly representatives of the people of Cholla Namdo.” 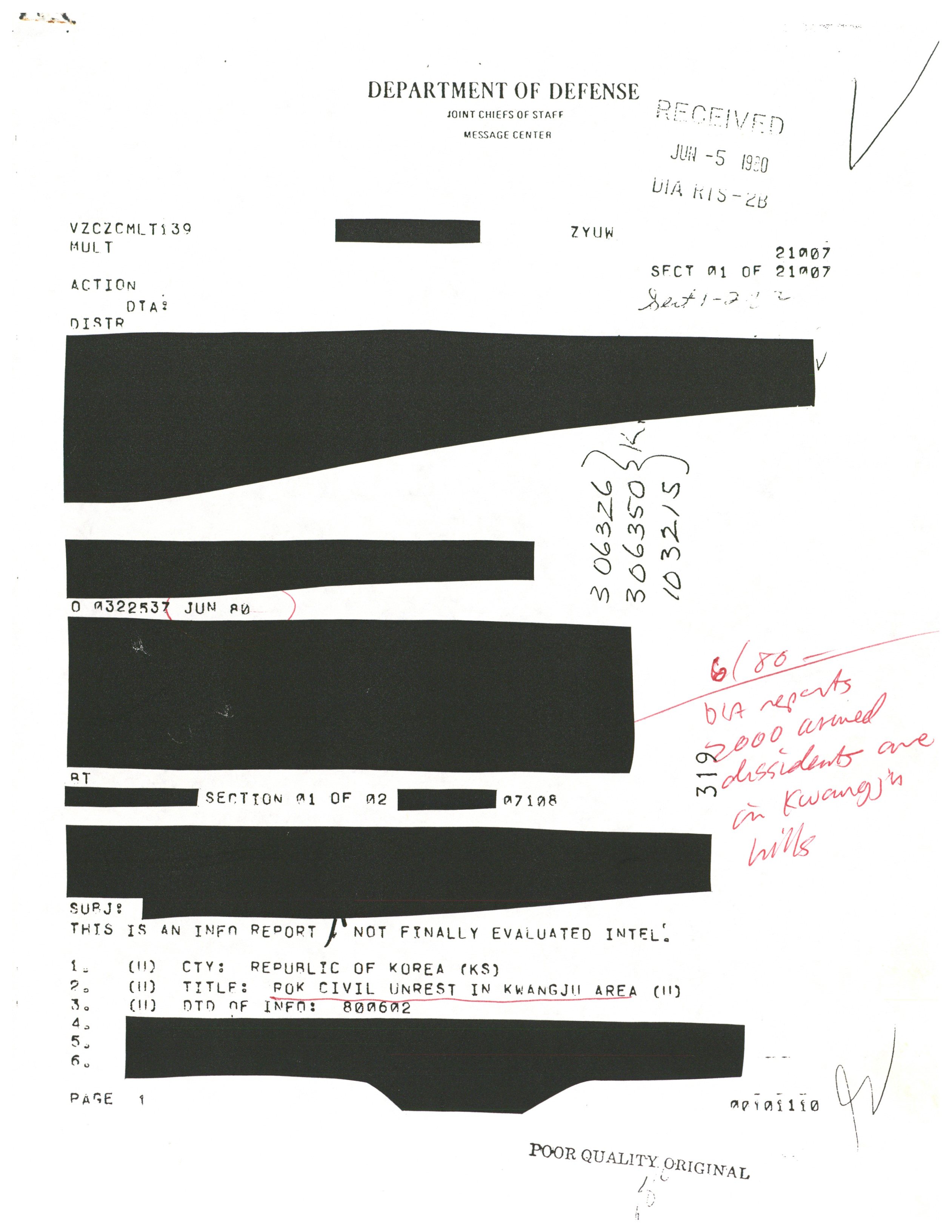 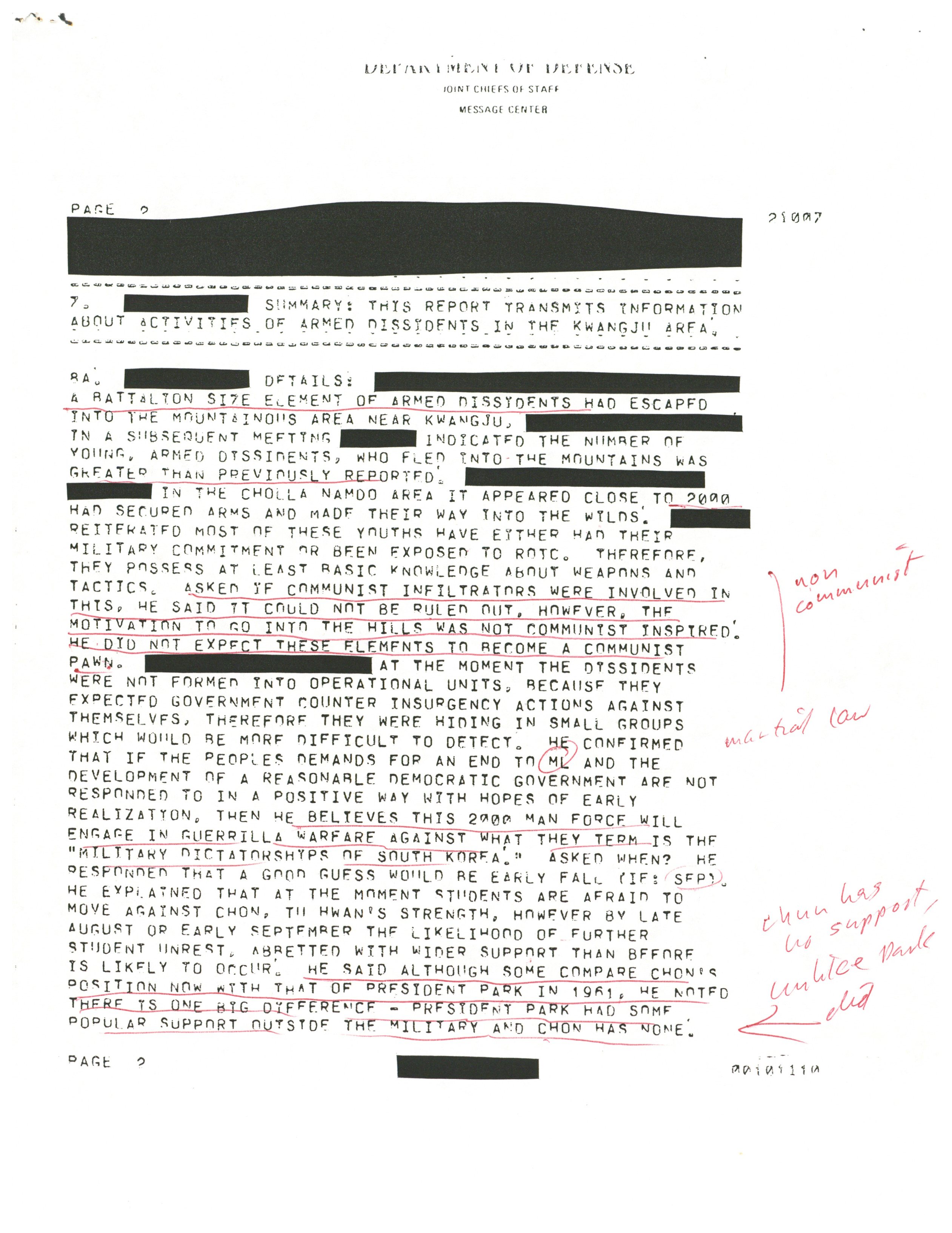 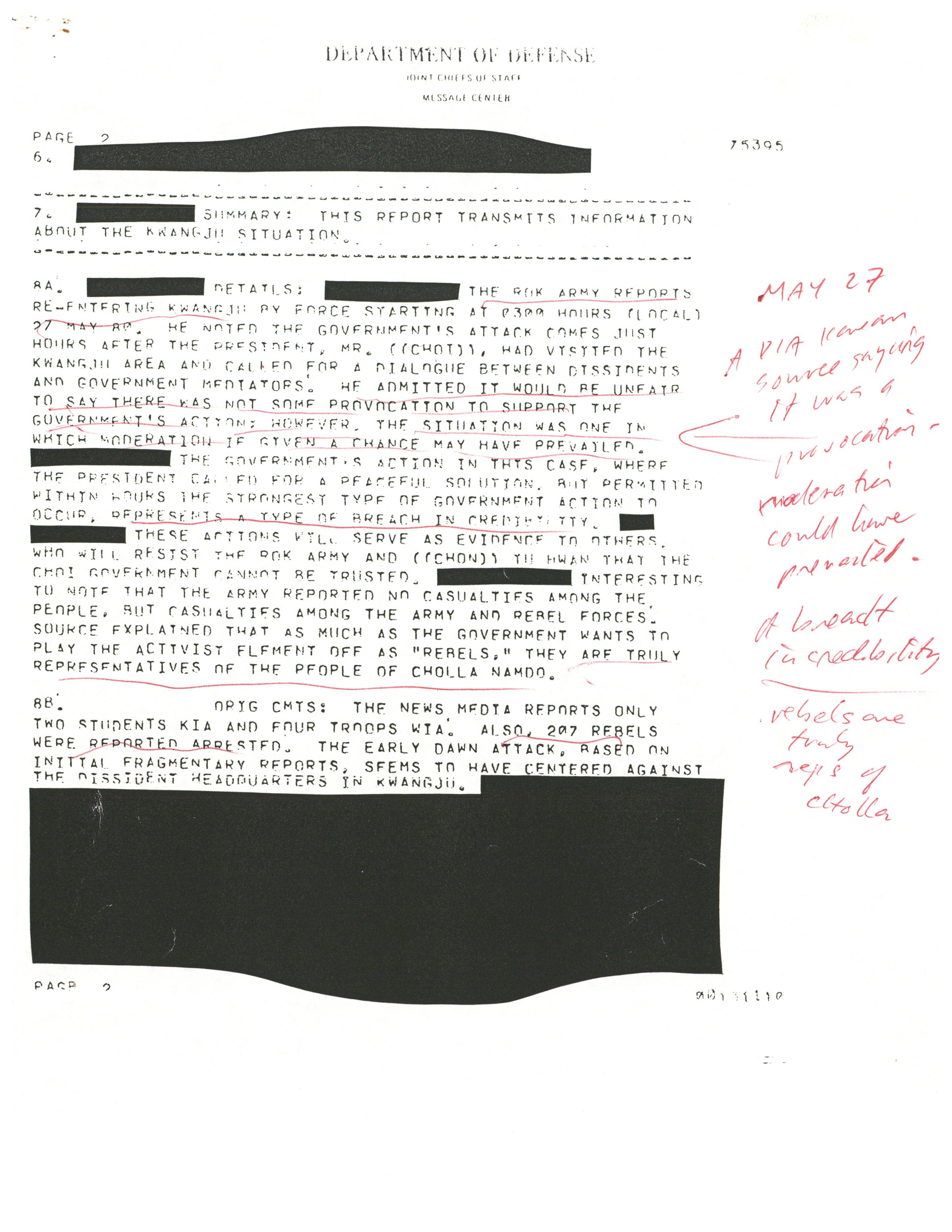 Moreover, US military intelligence openly scoffed at Chun’s claims of North Korean involvement. That can be seen in a secret DIA cable (dated June 2, 1980) about an official ROK Ministry of Defense report claiming that a North Korean agent had been captured in Seoul after “agitating demonstrators” in Gwangju. “The data is one-sided and somewhat distorts” the picture, DIA concluded about what it called the “alleged communist infiltration.” The analyst added, somewhat sarcastically: “The ROKG would have it believed that because of these aggitations (sic)…extended ML [martial law] was the will of the people.” 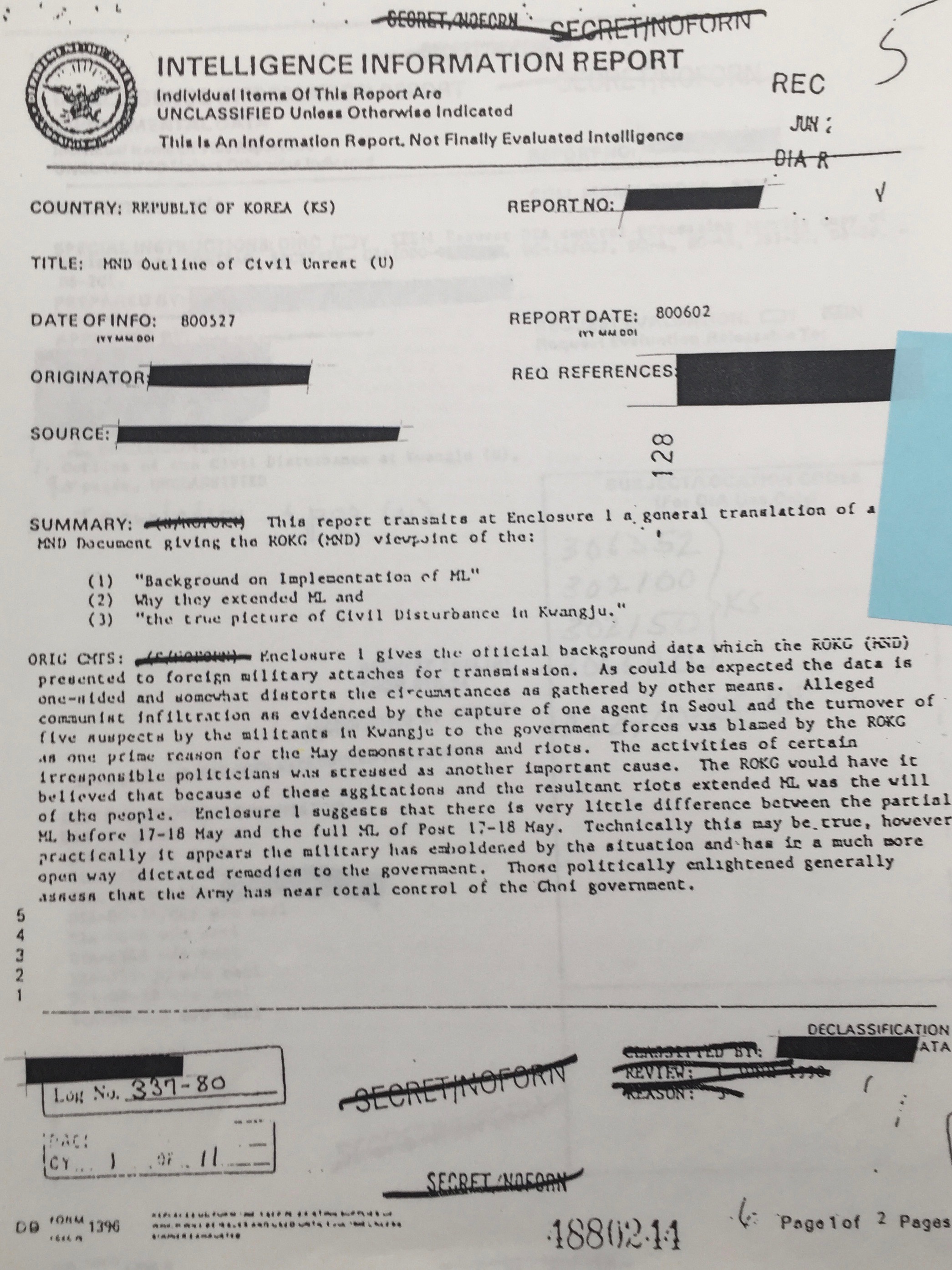 It is also notable that the detailed reports sent to Washington from US Ambassador William Gleysteen during and after the uprising mention nothing of North Korean involvement except in the context of US determination to prevent it. A famous cable he sent at the height of the rebellion, for example, states that General John Wickham, the commander of US Forces Korea at the time, had “agreed to a high internal alert status against infiltration.” Wickham, Gleysteen added, might consider additional US forces “if we become increasingly concerned about the potential for North Korean exploitation.” But this was only speculation: the cable also calls the “massive insurrection” in Gwangju an “internal threat” to the Chun group within the ROK military, which he noted “obviously feel threatened by the whole affair.” 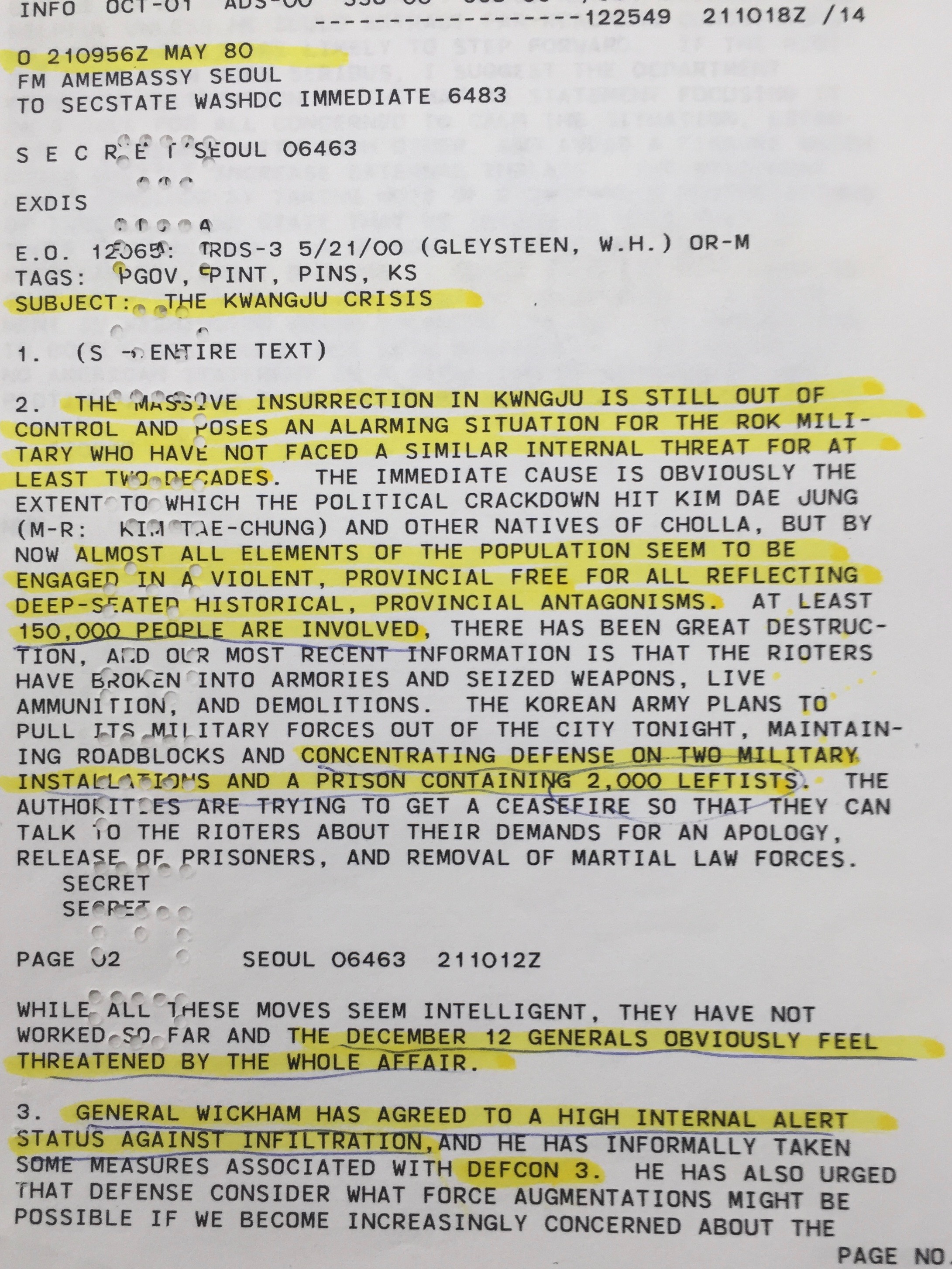 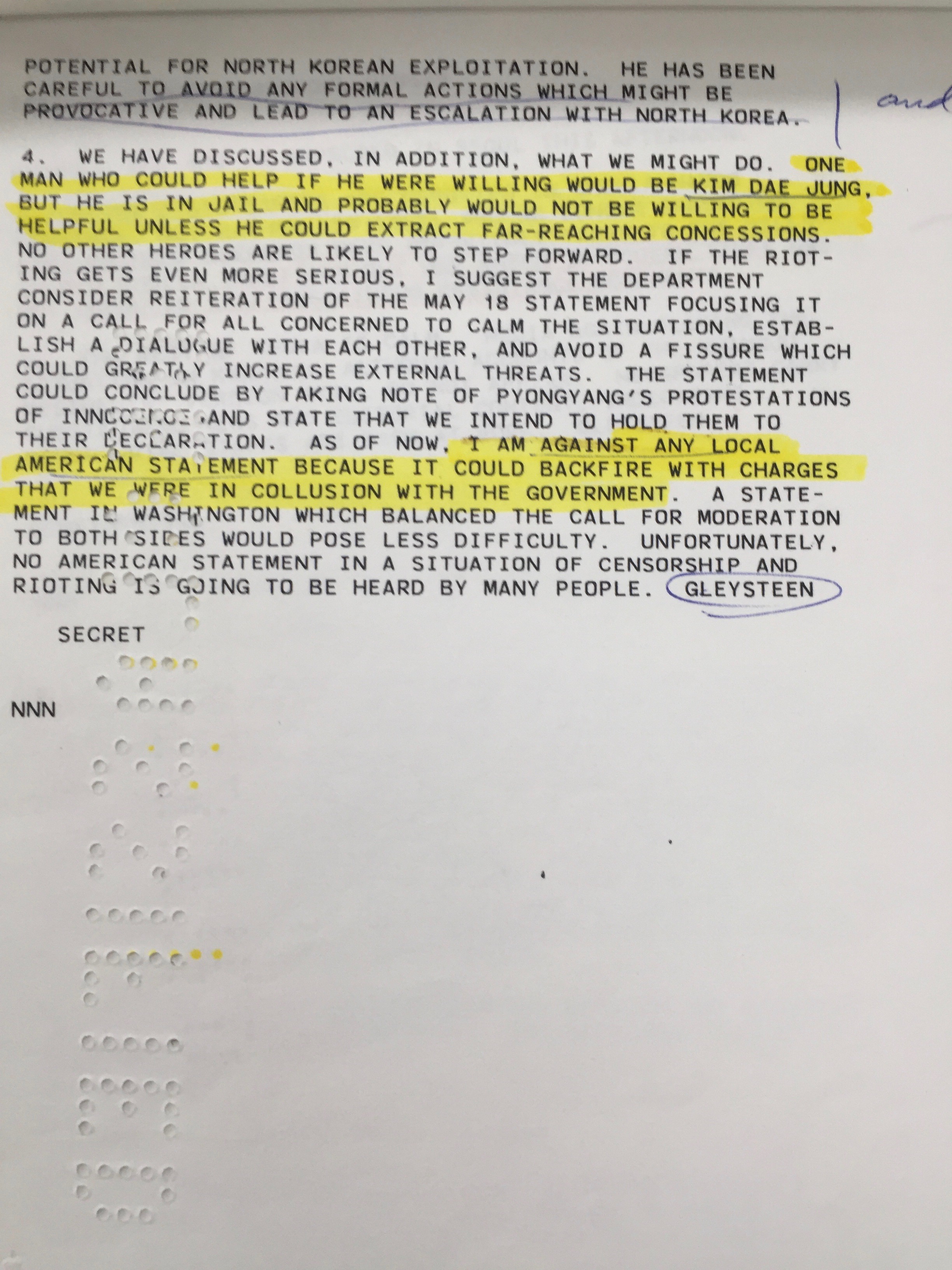 Gleysteen was well-briefed: the Korea country team he headed with Wickham also included the CIA Station Chief, whose reports (which are heavily redacted) don’t include any references to North Korean involvement in the “insurrection.” As I’ve told audiences in South Korea, the Korean peninsula was, and is, one of the most surveilled spots on earth. If the combination of US SIGINT and human intelligence had picked up any evidence whatsoever of North Korea infiltration into Gwangju or the Cholla area where the rebellion took place, Gleysteen’s team would have made this information immediately known to the US government and most likely made it public.

But sadly, despite the lack of North Korean involvement, the Carter administration agreed to support the ROK Army’s decision to end the Gwangju Uprising with troops from the US-South Korean Joint Command. This decision was made for national security reasons at a high-level meeting at the White House on May 22, 1980, one day after the ROK army’s massacre of civilians on May 21 that was captured by Hitzpeter and shown in graphic detail in “A Taxi Driver.” As I reported in my story on the FOIA documents in 1996, the minutes state that, after a full discussion,” there was general agreement that the first priority is the restoration of order in Kwangju by the Korean authorities with the minimum use of force necessary without laying the seeds for wide disorders later.”

As we know, the Carter administration’s decision was a giant setback to US-South Korean relations, and stirred up a deep sense of betrayal and anti-Americanism in the South. The new film about Gwangju and the Moon government’s investigation into the massacre and uprising could open the door for greater scrutiny into the US role in South Korea in the crucial year of 1980. That might complicate bilateral relations at a time of severe tension with North Korea, yet could also help heal wounds that in the 1980s came close to tearing the US-South Korean alliance apart.