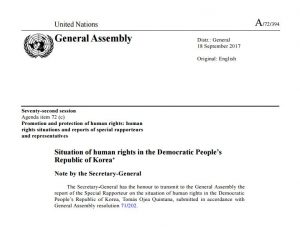 As the UN Security Council prepares to meet next week to draw the connection between North Korea’s human rights practices and international peace and security, it is pertinent to review the latest report of the UN Special Rapporteur on human rights in the DPRK.[1] Appointed in 2016, Special Rapporteur Tomás Ojea Quintana of Argentina offers something for everyone, in particular the supporters of engagement with the DPRK. He gives special emphasis to issues that might resonate positively with the North Korean government and expresses confidence in the North’s ability to cooperate with the UN if access to and engagement with the government are pursued. At the same time, he acknowledges that human rights pressure has had impact on North Korea and his report does not shy away from addressing human rights issues objectionable to the regime. He seeks a greater balance between calls for accountability and efforts to engage. The pursuit of both, he believes, can lead to changes on the ground. Whether this new approach will achieve what his two predecessors and the UN Commission of Inquiry (COI) did not—a visit to the country or a meaningful dialogue—remains to be seen.

Characterization of the Human Rights Situation

By opening his report with the statement that “patterns of human rights violations” continue to be documented in North Korea,[2] Mr. Ojea Quintana offers a lower-key description than that put forward in earlier Special Rapporteur reports[3] and in the COI report, which found crimes against humanity and called for referral of the case to the International Criminal Court (ICC).[4] The language mirrors that of the new UN Secretary-General António Guterres, who in reporting to the General Assembly, described “persisting patterns of serious human rights violations,”[5] in sharp contrast to former Justice Michael Kirby, chair of the COI, who termed this characterization “a serious understatement.” Justice Kirby stated:

As the UN’s COI report made clear, North Korea is not simply another country causing ‘serious human rights violations.’ The COI found that it is guilty of ‘crimes against humanity’…. Such crimes demand immediate accountability.[6]

Although the Special Rapporteur says he will “closely attend” to implementing the accountability recommendations of the Human Rights Council and Group of Independent Experts,[7] the overall descriptive language used throughout of “violations” falls short of what would be required to hold perpetrators accountable in an international court focused on war crimes and crimes against humanity.

The Impact of UN Sanctions and “Conflict Rhetoric” on Human Rights

That the Special Rapporteur seeks to be responsive to the DPRK is also evident in the emphasis he gives to the “unintended negative impact” of sanctions on the North Korean people.[8] He warns that economic sanctions approved by the UN Security Council could affect the welfare of the population and becomes the first Rapporteur to call for a “full assessment” of the impact of sanctions.[9] In particular, he highlights the possible “detrimental impact” of “export bans” on vital sectors (e.g. coal, iron, seafood, textiles) and on “ordinary” North Koreans.[10] (His position on this contrasts with that taken by the General Assembly, which in its November 14 resolution condemned the North Korean government for setting aside the welfare of its people by “diverting its resources” to its nuclear program.[11]) To address the chronic malnutrition of nearly a quarter of the population, Mr. Ojea Quintana appeals for increased international humanitarian aid to North Korea, noting that sanctions could interfere with the timely delivery of aid, but also calls on North Korea to make food security a priority and to “carefully balance out subsistence needs with defence and security expenditures.”[12]

On the political side, the Special Rapporteur addresses the impact of the rise in tensions between the DPRK and the United States on ordinary people’s lives, and appeals for a reduction of “conflict rhetoric” and “incitement to armed confrontation.”[13] He endorses “dialogue” with the DPRK, with human rights high on the agenda, and strongly supports rapprochement between North and South Korea, as proposed by the Moon Jae-in administration.[14]

Chance for a Visit

When the UN in 2004 created the position of UN Special Rapporteur “to investigate and report” on the human rights situation, North Korea made clear that it would not allow the Rapporteur to visit because it considered the appointment “a political plot” intended to “change the ideology and system of our country.”[15] In 2014, it changed course and invited then Special Rapporteur Marzuki Darusman for a visit in exchange for the deletion of paragraphs on crimes against humanity and the ICC from the General Assembly resolution.[16] When the paragraphs remained, the DPRK withdrew its invitation. In the case of Mr. Ojea Quintana, North Korean diplomats suggested that he undertake “a private visit” to the DPRK in his capacity as a law professor. But when he “signaled his availability,” he was told he would not be welcome as long as he remained Special Rapporteur.[17]

Nevertheless, the Special Rapporteur expresses his intention to continue informally to discuss with North Korea an official visit, or as a “starting point,”[18] “a dialogue,” and he calls upon the DPRK to invite him “in the near future.”[19] He also explores alternative routes in his report, citing, for example, the Special Rapporteur on the Rights of Persons with Disabilities who paid the first visit of any thematic rapporteur to the DPRK in 2017. Although some in the human rights field questioned her decision to go when the country rapporteur was denied entry, Mr. Ojea Quintana considers the visit progress on the road to opening up North Korea.[20] He would like to see other thematic rapporteurs visit as well as representatives of UN treaty bodies[21] as part of their review of North Korea’s compliance with human rights agreements to which it has acceded.[22] Such visits and interactions, he believes, can lead to legal and policy changes.

The Impact of Human Rights Pressure

In a nod to proponents of accountability, Mr. Ojea Quintana credits international human rights pressure, in particular the COI, with a number of “positive” steps taken by North Korea to engage with UN human rights mechanisms[23]: 1) the visit of the disability rapporteur; 2) the submission of reports on women’s and children’s rights to the UN treaty bodies; and 3) the acceptance of more than 100 recommendations made to the DPRK by UN member states at the Universal Periodic Review (UPR).[24] He also links UN efforts at accountability to “unconfirmed” reports of improvements in detention facilities[25] and predicts that further measures, such as the recruitment of international criminal law experts by the Office of the High Commissioner for Human Rights in Seoul, could have a deterrent effect as well.[26] Although the extent to which all these steps will lead to genuine reform can be questioned,[27] they do show that North Korea is sensitive to human rights criticism and considers it useful to engage with at least some parts of the UN human rights system. The Special Rapporteur regards such “openings” as “opportunities” for engagement and improving conditions on the ground.[28]

In addition to dealing with political prison camps, abductions, forced repatriations and restrictions on freedom of information, the report also introduces new issues, such as North Korea’s treatment of foreigners in detention, the need for humanitarian organizations to gain access to prisons, and the negative effect of corruption on human rights.

After the Special Rapporteur criticized the treatment of Otto Warmbier, the detained American student brought back to the United States in a coma, North Korea denounced Mr. Ojea Quintana as “the model servant of the hostile forces.”[29] His report nonetheless continues to remind the DPRK of its international legal obligations in the Warmbier case and toward nine other foreign nationals held in detention (three Americans and six South Koreans). It implies that although different international rules apply to them, their fate may be as precarious as North Koreans held in detention.

A Role for Humanitarian Organizations

Mr. Ojea Quintana breaks welcome new ground in calling for humanitarian agencies to take account of the food and medical deprivations of detained North Koreans,[30] who number more than 100,000. Since the introduction of the UN’s Human Rights Up Front Approach (HRuF) in 2013, the entire UN system is expected to come together to address situations of serious human rights violations that can become atrocities.[31] In the DPRK, however, the humanitarian agencies on the ground have been fearful of jeopardizing their programs.[32] The Special Rapporteur encourages them to seek to reach all vulnerable groups with their aid, including “persons in detention.”

Recalling Typhoon Lionrock (where the humanitarian organizations failed to request access), he warns that prisoners could be at risk in future natural disasters, and urges that “priority” be given to reaching them.[33] He offers to work closely with the Country Team and Resident Coordinator and proposes discussions with the DPRK about access to the camps.[34]

The extensive use of bribes in North Korea to secure “access to public services” such as employment, medical care, travel and housing, is given attention in the report, as are bribes to avoid arrest.[35] The rapid growth of markets, considered beneficial to the population, has at the same time increased corruption levels, with business people having to pay off government officials to operate. To address the “poorly structured economic, political and social institutions” at the root of this widespread practice, the Special Rapporteur proposes reforms and technical assistance but does not question whether the DPRK, as presently constituted, is capable of effectively transforming itself.

While little optimism is generally to be found in reports about North Korea’s human rights record, Mr. Ojea Quintana sees the “possibility to achieve immediate, concrete changes on the ground” as a result of North Korea’s engagement with UN human rights mechanisms.[36] Certainly, it is to be hoped that the lives of disabled persons will be improved by the visit of the disability rapporteur and that the outcome of North Korea’s exchange with the treaty bodies on children and women will lead to results,[37] not to mention the hoped for implementation of the UPR recommendations. But given North Korea’s past practices, skepticism is warranted, underscoring the need for continued human rights pressure. Visits of additional thematic rapporteurs could be useful, but an agenda of the UN’s human rights priorities in North Korea should be developed. It would need to encompass not only those issues North Korea might be willing to talk about but those it excluded from consideration at the UPR, in particular the ones deemed to have crossed “the high threshold of crimes against humanity.”[38]