For the past five years, 38 North has been researching North Korea’s development and production of solid-propellant rocket engines to gain a more comprehensive understanding of the North’s ballistic missile program. While a number of potential production facilities have been identified throughout the country, the No. 17 Explosives Factory[1] and its branch factories near Hamhung have been identified as being the most probable site for the manufacture of the latest large solid-propellant rocket engines,[2] based on the location of several critical supporting facilities in the general area. The September 2017 UN Panel of Experts Report supports this assessment, stating:

The Pukguksong-1 and -2 show the ascendancy of solid-fuel engines in the modernization of the country’s ballistic missile forces. This is also reinforced by the modifications and constructions experienced by an industrial area near the solid-fuel engine test site of Hamhung which could be linked to a solid-fuel production plant (see annex 5).[3]

The start of construction of two new mixing/casting facilities at the No. 17 Explosives Factory indicates that the North’s larger solid-propellant rocket engine programs had, by mid-2012, reached the level of maturity to move from research and development to production. The completion of these two facilities in 2014 was critical to the North’s solid-propellant missile programs as evidenced by at least three events during the following two years: 1) the first flight test of the Pukguksong-1 (KN-11) submarine launched ballistic missile in May 2015; 2) the appearance of the KN-09 300 mm multiple rocket launcher in March 2016; and 3) Kim Jong Un’s guidance of a test-firing of a large solid-propellant rocket engine at the Magunpo Solid-propellant Rocket Engine Test Facility, also in March 2016. Along with other developments, the two new facilities at the No. 17 Explosives Factory provide the North with the industrial base to significantly expand its solid-propellant missile force. While this force currently consists of 300 mm short-range missiles, Pukguksong-1 submarine launched ballistic missiles and Pukguksong-2 medium-range ballistic missiles, given the infrastructure for solid-propellant rocket engine manufacturing, it is reasonable for the North to expand to newer more capable systems (e.g., Pukguksong-3) going forward.

North Korea has been working on developing solid-propellant missiles because they can be transported, stored and prepared for launch more quickly than liquid-fueled systems. This, in turn, offers significant operational and tactical advantages over liquid-fueled missiles with similar size and range capabilities.

The country began manufacturing small solid-propellant artillery rockets shortly after the end of the Korean War. During the late-1960s or early-1970s this is believed to have expanded to, first, the indigenous production of the FROG-3 and subsequently, during the mid-to-late-1970s, to FROG-7 artillery rockets.[4] Although the details are uncertain, by the late-1990s, the North was producing a variant of the Russian SS-21 SCARAB (9K79 Tochka) short-range ballistic missile known as the KN-02 or “Toksa.”[5]

The No. 17 Explosives Factory

North Korea’s current solid-propellant rocket engine developments are logically centered on the No. 17 Explosives Factory and its branch factories in the Hamhung-Hungnam area—the heart of the country’s chemical industry. There are also a number of facilities in the area that both directly and indirectly support solid-propellant rocket engine development. Among these are the February 8 Vinylon Complex, Pongung Chemical Plant, and Hungnam Fertilizer Complex[6]—some of the most important chemical complexes in North Korea—as well as the Magunpo Solid-propellant Rocket Engine Test Facility, the Chemical Material Institute of the Academy of Defense Sciences (Kim Jong Un visited this facility in August 2017)[7], the Pungdong-dong Explosives Factory, the State Academy of Sciences’ Hamhung Branch Academy, and more.[8]

Figure 2. Overview of No. 17 Explosives Factory.

The No. 17 Explosives Factory (sometimes identified as the Hungnam Explosives Plant) has its origins during the Japanese occupation of Korea during World War II when it was called the Chosen Nitrogen Explosives Factory.[9] It is the largest producer of explosives in North Korea. During the late-1960s had an annual production of approximately 5,500 tons—one-third of its installed capacity,[10] and its work force totaled about 2,000 personnel.[11] By the early-1990s, activity and production at the factory slowed due to the economic collapse and famine known as the Arduous March. This changed during the mid-1990s, not only because of the gradual easing of economic conditions, but as a result of producing the KN-02 and its solid-propellant rocket engine. Although production output and number of employees are currently unknown, the facility has remained active and well-maintained throughout the 2000s.

The facility is located in the southwest corner of Hungnam-guyok (39.822027, 127.589917) along the eastern bank of the Songchon-gang (i.e., Songchon River) and encompasses 1.9 acres. While the No. 17 Explosives Factory can broadly be broken down into six areas by function, the two larger mixing/casting compounds—one in northern manufacturing and storage area and the other in the central administration, support and manufacturing area—are of greatest interest to the North’s solid-propellant missile programs.

Figure 3. Northern production and storage area at the No. 17 Explosives Factory.

A mixing/casting facility has been located in the northeast corner of the northern production and storage area since at least the 1990s. At that time, the facility consisted of three small buildings surrounded by a 55 square meter earth revetment with walls approximately 15 meters wide at the base and 10 meters high. The primary access to the buildings was through a tunnel cut through the west side of the revetment. What appears to be a secondary tunnel—possibly for drainage—was on the east of the casting facility.

Approximately 27 meters to the south was a facility with an attached smokestack surrounded by a 45 square meter revetment with walls about the same height and thickness at the mixing/casting facility’s and with similar access. In between the two revetments was a support building that was either built or refurbished during the early 2000s. Approximately 12 support buildings that provide various components to the mixing/casting facility are located in the area to the west.

Figures 4 & 5. Construction of support buildings at the northern casting facility. 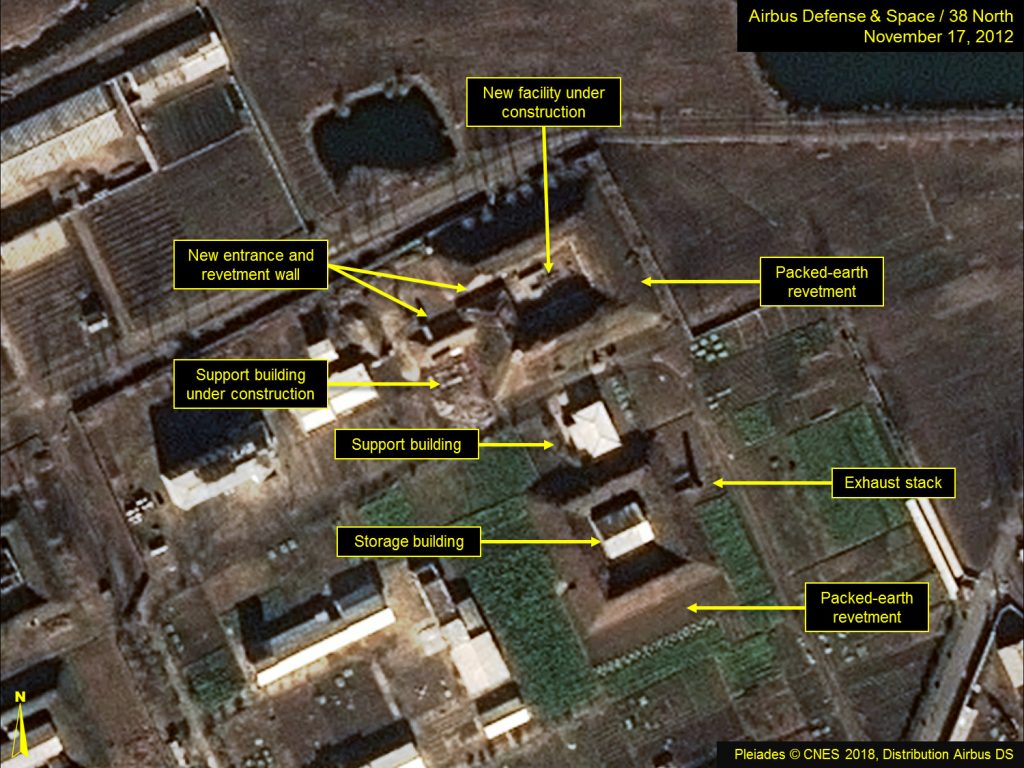 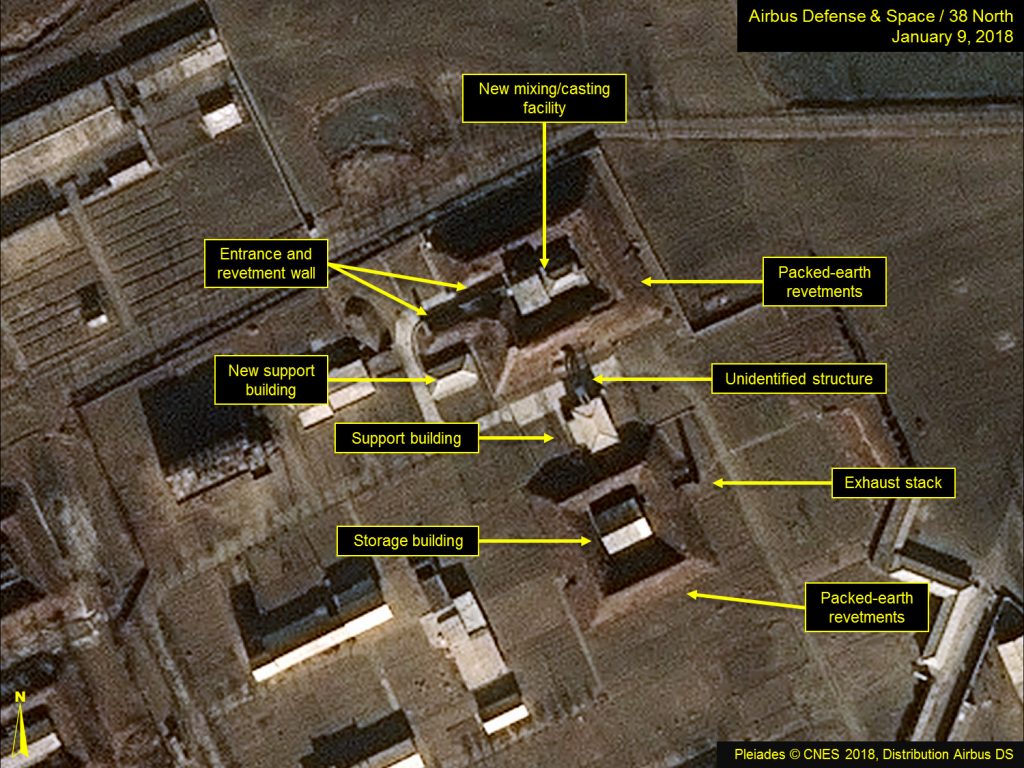 In 2012, construction began to replace the existing mixing/casting facility and the support building immediately to the west. Although the external size of the revetment did not change, an opening was cut in the western wall for a new entrance road replacing the original tunnel. A new wall was also added to the revetment that extended 18 meters to the west to protect a new support building (measuring about 15 meters by 8 meters).

By 2014, the construction of two new attached buildings (one being a two-story structure) with a combined footprint of 20 meters by 9 meters was complete. Additionally, some modifications have been made to the northern wall of the support building located between the two revetments. It is unclear if there is a conveyor belt or slurry delivery system from this building to either of the revetments.

The size and layout of the new mixing/casting building suggests that it could be used to produce large solid-propellant rocket engines of at least the size of the KN-02 and new KN-09 300 mm multiple rocket launcher. Currently, minor construction, the occasional sighting of vehicles or personnel and the well-maintained state of the facility indicates that it is still operational. Satellite imagery alone, however, provides no indication of its current level of production.

In late-2012, commercial satellite imagery indicated that construction had begun for a new large modern mixing/casting facility in the central administration, support and production area. By the end of the following year, the foundations and walls for a large (50 meters by 13 meters), arched roof, mixed-level building had been completed. In 2014, a second smaller arched roof building (23 meters by 13 meters) was erected and both buildings were enclosed in adjoining revetments with walls that were approximately 12 meters wide at the base and 10 meters high. Additionally, a small vertical tank and support structure were added to the first compound. The two compounds were connected by an enclosed conveyor belt or slurry delivery system (17 meters long) that penetrated their common revetment wall. Together the two revetments measure approximately 117 meters by 49 meters and encompass 5,300 square meters. The primary access to both buildings is through tunnels cut through the west sides of each of the revetments. What appear to be secondary tunnels—possibly for drainage—are located on the north and east revetment walls.

By the fall of 2014, the new mixing/casting facility was externally complete and appeared to be operating. The size and layout of these new buildings suggests that it could be used to produce large solid-propellant rocket engines of the size used in the Pukguksong-1/-2 or larger. Currently, as with the northern casting facility, the occasional sighting of vehicles or personnel and the extremely well-maintained state of this facility indicates that it is operational. However, satellite imagery alone provides no indication of the current level of production. 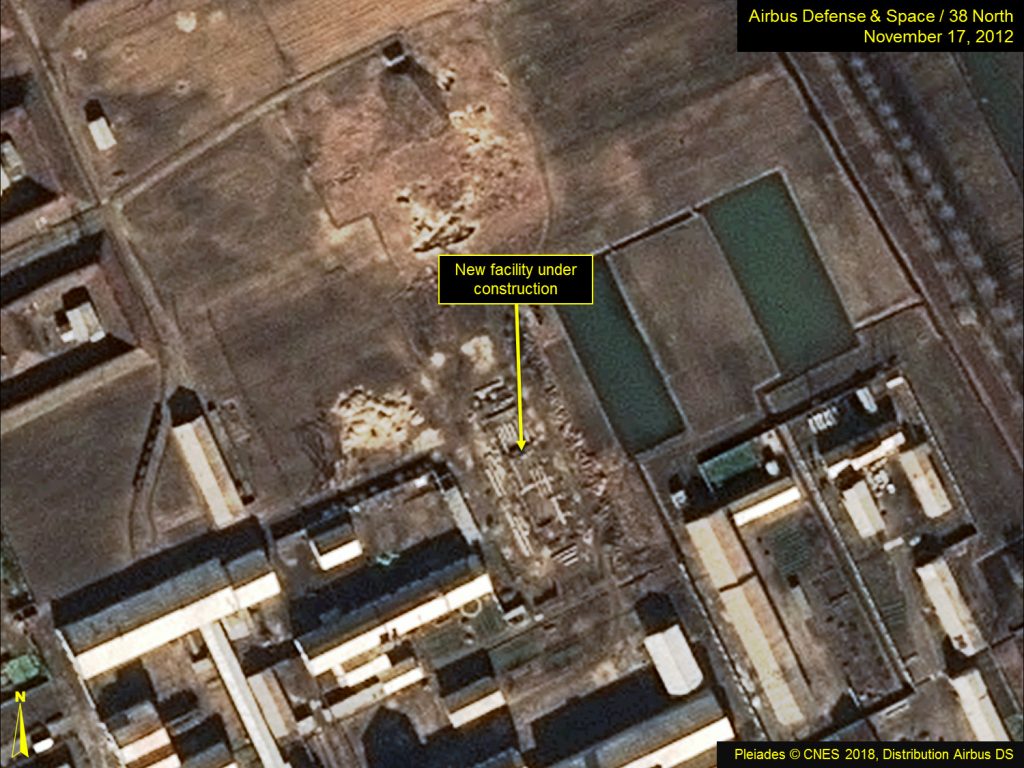 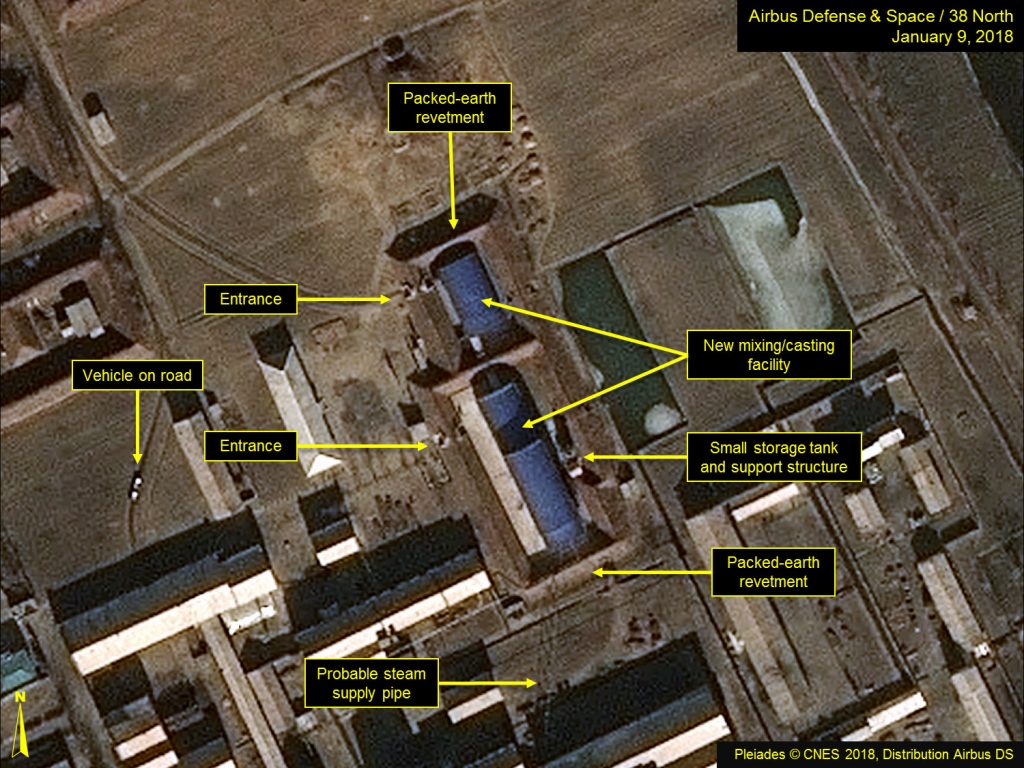