Recent commercial satellite imagery from May 15 indicates additional steps towards closure have been taken at North Korea’s Punggye-ri Nuclear Test Site, possibly including preparations to build a safe reviewing stand for visitors to observe the explosive closure of all three Punggye-ri portal areas.

Over the past week, small buildings/sheds have also been removed and general site cleanup has continued. Key buildings at the Command Center and the Main Administrative Area remain intact. The unusual activity observed a week ago, on the hillside near the West Portal, could represent the stockpiling of tunnel timbers and/or building materials reclaimed from the ongoing dismantlement effort, but given the exposed hillside location with an unobstructed viewshed, the most likely explanation is that it will form an observation platform to allow journalists to safely view the explosive closure of the North and West Portals.

Preparations do, therefore, appear to continue ahead of the visit by foreign journalists to witness the final site closure during May 23-25, which will reportedly involve the “collapsing all of its tunnels with explosions, blocking its entrances, and removing all observation facilities, research buildings and security posts.”

Imagery from May 15 shows four rows of objects previously identified near the West Portal have been significantly altered and have increased substantially in height. Additionally, an improved pathway has been installed leading uphill to this area from a dirt road below. It is possible that these rows of objects might be accumulated tunnel timbers or other building materials that are being reclaimed during the site dismantlement effort and could be part of an effort to create a platform for visitors to safely observe the explosive closure of all three portals (North, West and South) (Figures 1 and 2).

Figure 1. Significant work has been done on an area uphill from the West Portal. 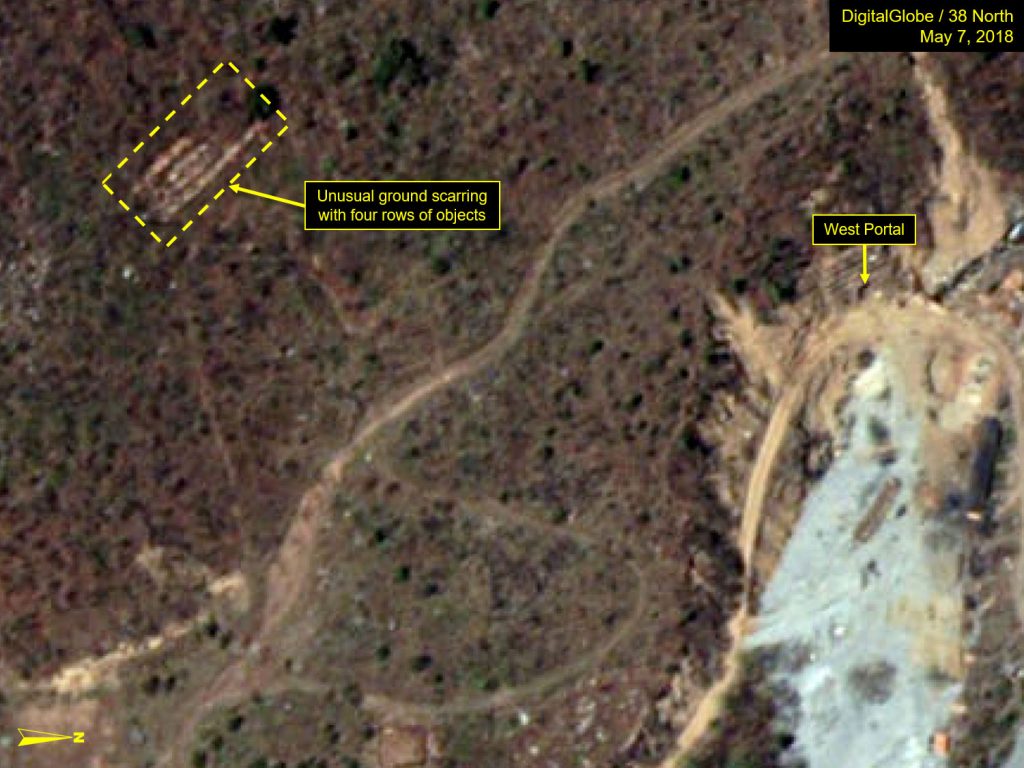 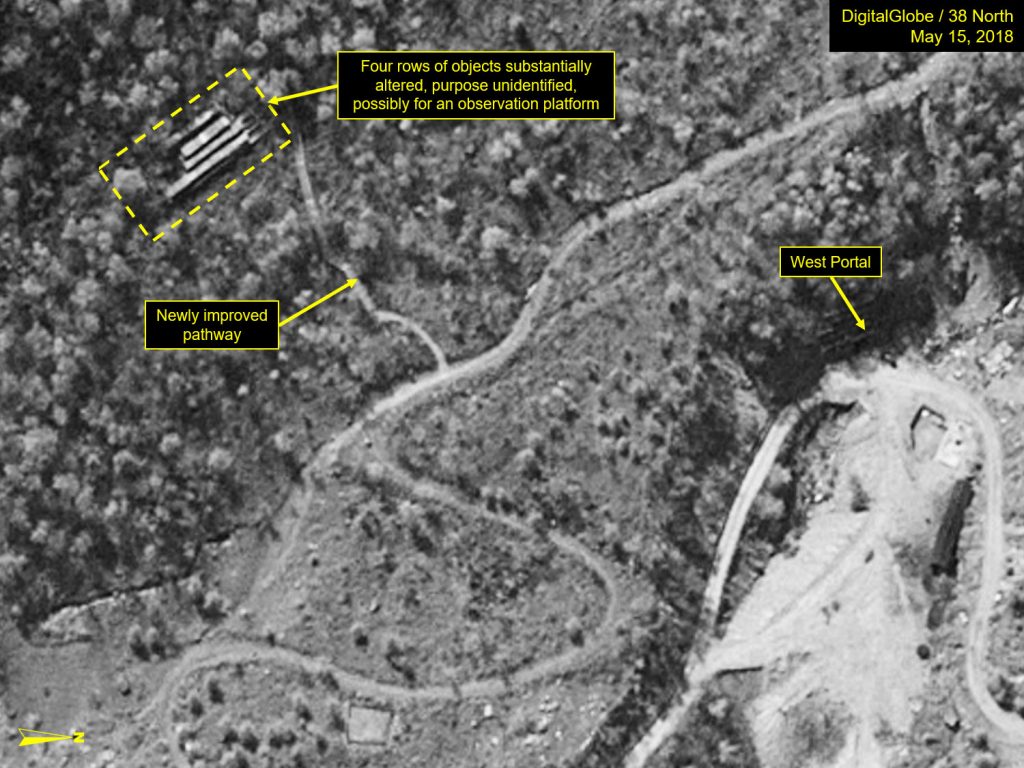 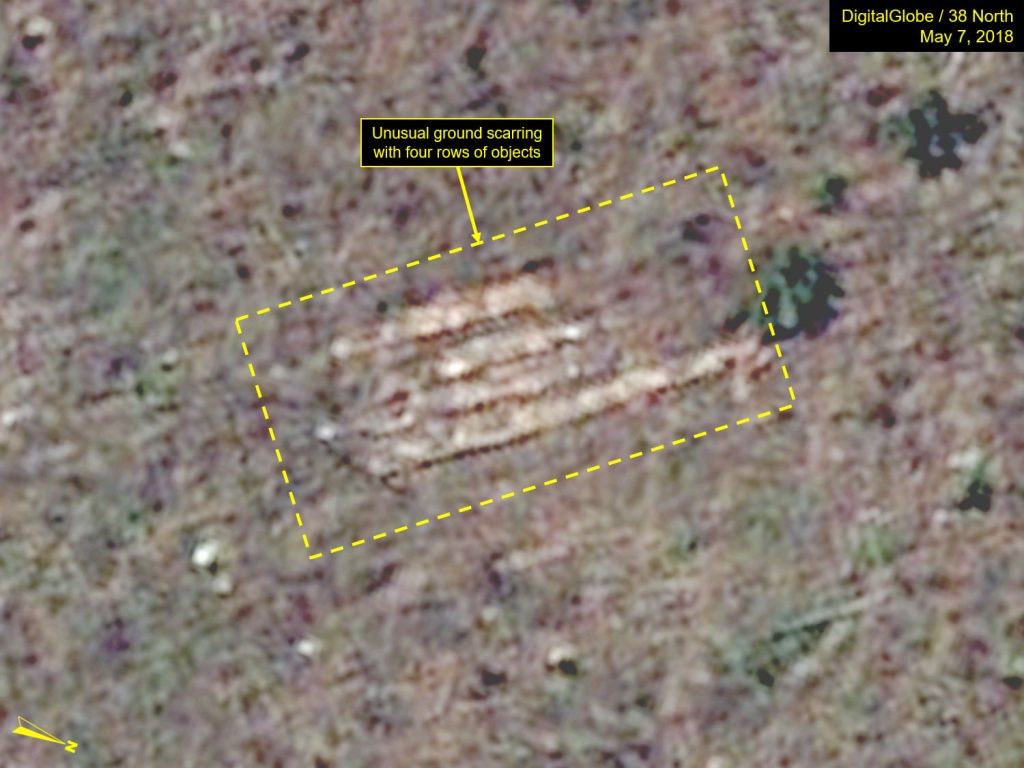 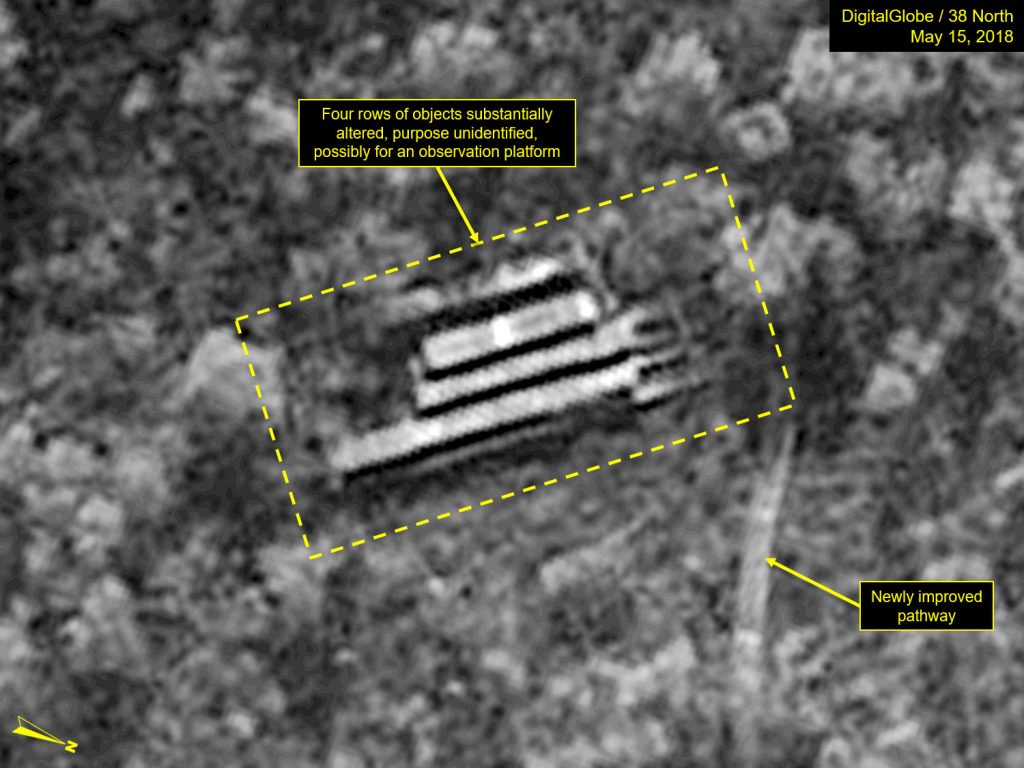 Figures 3 and 4 provide a Google Earth generated “viewshed” (the full area within view) from the unusual activity location, if it were to be used as an observation platform looking north towards Mt. Mantap and southeast towards the South Portal. The images provide strong evidence that the location could provide a clear view of the North, West and South Portal Areas (all areas in green have a clear line-of-sight from the that single vantage point).

Figure 3. Viewshed (in green) of area visible from possible platform, includes all three portal areas. Areas in grey are not visible from the location. 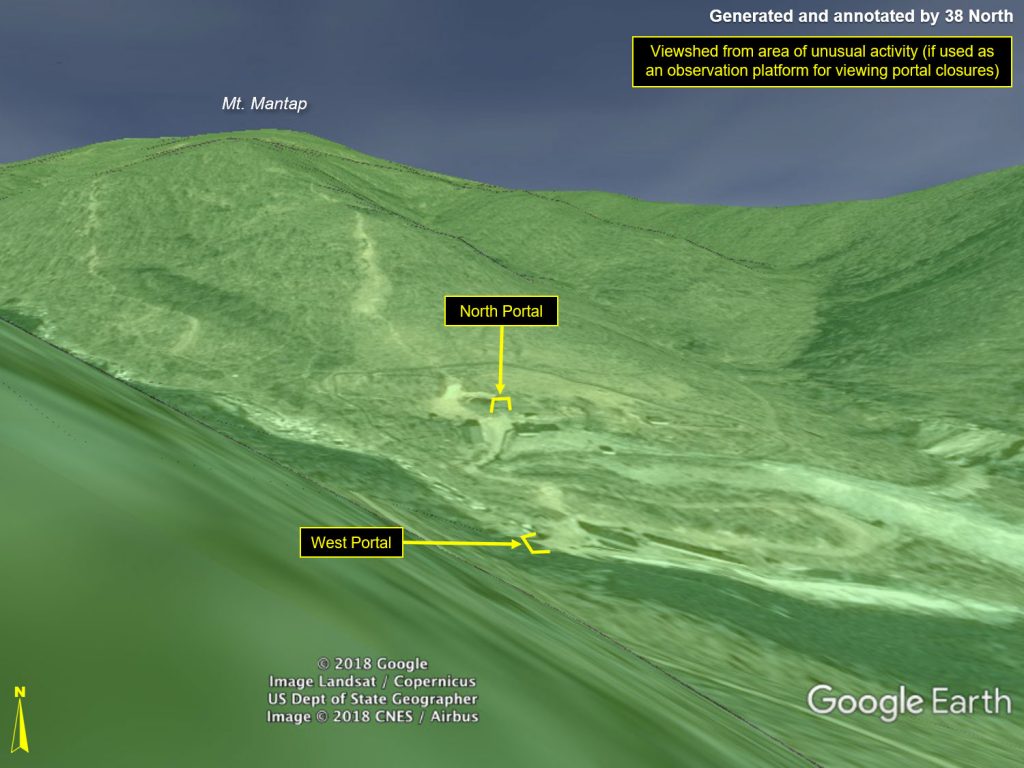 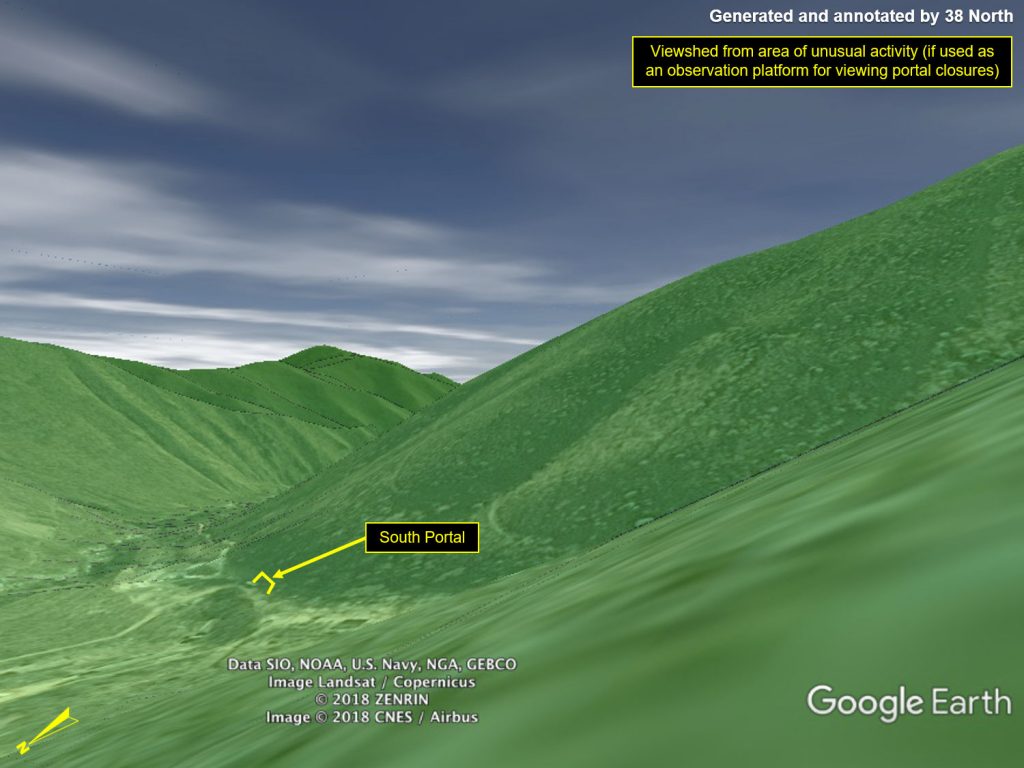 Between May 7 and May 15, efforts were underway to clean up the area in front of the North Portal, where the probable engineering office building, a possible instrumentation shed, and a small wall have been recently taken down. The probable compressor building, which previously gave the appearance of having part of its roof removed, now appears entirely intact in the May 15 imagery (Figure 5).

The North Portal is more readily observable on this image than it has in previous images, and some minor natural water drainage is continuing to be observed coming from the portal.

By May 15, all of the mining carts that had been lined up on the spoil pile have been removed, and the probable equipment maintenance workshop remains outwardly intact (Figure 6).

The compressor building, which had been partially removed on May 7, seems to have been completely torn down by May 15. One additional building was removed that had been located just west of the previously razed probable engineering office building. Most significantly, the apron area on the remains of the original spoil pile had been expanded and smoothed, possibly for visitor vehicle parking for next week’s planned closing ceremony (Figure 7).

Figure 7. Apron on former South Portal spoil pile has been expanded and smoothed.

The Main Administrative Support Area remains intact. A large open-top cargo truck is present in the lower courtyard, and the unidentified objects, possibly some pallets, which had been in front of the greenhouse on May 7 are no longer present (Figure 8).

Figure 9. Storage containers and vehicles are observed in the Command Center courtyard.

No significant activity is observed at either the Command Center Guard Barracks Area (see Figure 10) or the Southern Support Area (Figure 11). While one large truck is present heading south on the access road between these two areas (Figure 12), no vehicles or personnel are observed in any of the various nearby facilities.

Figure 10. No activity observed at the Guard Barracks Area.

Figure 11. No activity observed at the Southern Support Area.

Figure 12. One large truck observed on access road between the Guard Barracks and Southern Support Area.