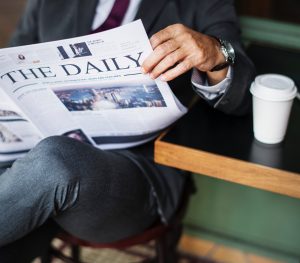 Shocked that a Trump-Kim summit meeting could soon take place? Worried that it could collapse? No wonder. You’ve been misled by coverage of US diplomacy with North Korea in the news media.

For months that coverage had all but ignored the possibility of negotiation. Never mind that the Trump administration’s stated policy was “maximum pressure and engagement.” Reporters in Washington and abroad focused on any signs of political, economic, and military pressure while all but ignoring diplomatic efforts underway offstage for fifteen months. South Korean and Japanese media followed their lead.

Once the possibility of a summit meeting became obvious, the very idea became the object of withering disparagement in the US news media. South Korean reporting was somewhat more optimistic and Japanese reporting more ominous, reflecting the proclivities of their governments.

Did you know that during the 2016 campaign, candidate Donald Trump repeatedly talked about negotiating with North Korea, not just having a hamburger with Kim Jong Un?

Or that within days of his inauguration, President Trump signed off on delivery of a token amount of flood relief, the first humanitarian aid to the DPRK in five years?

You may have heard that in February 2017, the chief of the American division in the DPRK Foreign Ministry was invited to New York to meet with the US diplomat in charge of negotiating with the North–only to have their meeting cancelled over the assassination of Kim Jong Un’s half-brother. But did you know that within weeks, talks began in the so-called “New York channel”? Subsequent meetings with North Korean policy-makers were held in Oslo and Pyongyang. That led to the release of the American detainee Otto Warmbier.

Did you know that the administration dropped preconditions for negotiations earlier this year?

Then came the disclosure of a proposed meeting between North Korea’s Kim Yong Chol and Vice President Mike Pence during the Olympics in South Korea–only to be cancelled by the North Koreans when Pence gave every indication en route to Seoul that he was not in a negotiating mood. If you missed it, that’s somewhat understandable because word of the meeting only reached the State Department belatedly. In the meantime, however, did you know that intelligence officials were talking with their North Korean counterparts?

If you were an assiduous reader of the press or a close observer of television news, evidence of diplomatic engagement with North Korea came as a surprise.

When the prospect of a summit meeting with Kim Jong Un was broached and President Trump said yes without hesitation, the disparagement of diplomacy in the US media began in earnest. Even former officials who had once advocated that we needed to get to the top man in Pyongyang in order to get anywhere in negotiations were now warning reporters of an impending disaster at the summit. An over-eager and naïve president would be taken to the cleaners by the devious North Koreans. David Nakamura’s article in the June 2 Washington Post exemplifies this assessment:

For Trump—an impulsive and demonstrative president whose macho handshakes, scowls and thumbs-up poses are tailor-made for social media memes—the risk over his interactions with Kim go beyond the private talks at the bargaining table, former U.S. officials said. …

Trump critics call his approach to foreign policy inconsistent and naive, handing his rivals unintended victories by allowing his instincts to undermine his own administration’s strategy.

Nothing good can come of the summit, or so the conventional wisdom goes. Kim will just string Trump along while he makes more weapons.

If so, then why did Kim stop short of demonstrating a proven thermonuclear weapon and an ICBM with a reentry vehicle to deliver it? Didn’t that enable Trump to realize his wish, stated just before his inauguration, that “it won’t happen”?

Will Kim ever part with his “treasured sword” of deterrence? Almost everyone quoted in the news was certain he wouldn’t. How did they know?  The only way to find out was for the Trump administration to engage in sustained negotiations and keep its end of the bargain.

President Trump never tires of pointing out that his predecessors left him the “mess” of a nuclear-armed North Korea—a legacy of errors he vows not to repeat.

But as Mr. Trump announced Friday that his summit meeting with Kim Jong Un was back on, there were moments when he echoed Bill Clinton in his failed effort to settle another North Korea crisis nearly a quarter century ago.

Rather than sticking with the demand that North Korea disarm immediately, Mr. Trump opened the door to a prolonged freeze on the North’s existing nuclear capability, with vague declarations that disarmament will follow. That is essentially the deal Mr. Clinton embarked on with Mr. Kim’s grandfather, Kim Il Sung, in 1994.

Rather than warning that he would keep the younger Mr. Kim’s feet to the fire with sanctions until he complies, Mr. Trump said after meeting in the Oval Office with North Korea’s spy chief that he no longer wanted to use the term “maximum pressure,” a phrase drilled into the vocabulary of his aides for the past year.

And rather than keeping a single-minded focus on nuclear weapons, Mr. Trump suggested that the most tangible outcome of his meeting in Singapore might be some kind of peace agreement to formally end the Korean War—a lofty idea that featured in a 2005 joint statement that inaugurated George W. Bush’s failed effort with Kim Jong Il, the current leader’s father, to halt the North’s nuclear progress.

Every claim the story makes is questionable, based on a one-sided misreading of the negotiating history and complete incomprehension about the Kims’ aims.

A clear-eyed view of what has transpired in the past would observe that the North stopped reprocessing plutonium in 1991 and did not resume until 2003–at a time when it had no nuclear weapons and no other way to make the explosive ingredient in them. The shutdown under the Agreed Framework deprived the North of 75 to 100 bombs’ worth of plutonium, by US estimates. Once again, it shuttered its production of fissile material and stopped test-launches of medium and longer-range missiles from 2007 to 2009.

News consumers will also look in vain for what the North Koreans have been seeking in return for denuclearization: an end to US enmity and reconciliation with the United States.

That has been the Kims’ aim for thirty years. Throughout the Cold War, Kim Jong Un’s grandfather, Kim Il Sung, had played China off against the Soviet Union to maintain his freedom of maneuver. In 1988, anticipating the Soviet Union’s collapse, he reached out to reconcile with the United States, South Korea and Japan in order to avoid overdependence on China. The North’s need has become greater as China’s power has grown.

From Pyongyang’s vantage point, that aim was the basis of the 1994 Agreed Framework, which committed Washington to “move toward full normalization of political and economic relations,” or, in plain English, to end enmity. That was also the essence of the September 2005 Six Party Joint Statement which bound Washington and Pyongyang to “respect each other’s sovereignty, exist peacefully together, and take steps to normalize their relations subject to their respective bilateral policies” as well as to “negotiate a permanent peace regime on the Korean Peninsula.” For Washington, the point of these agreements was the abandonment of Pyongyang’s nuclear and missile programs. Both agreements collapsed, however, when Washington did little to implement its commitment to reconcile and Pyongyang reneged on denuclearization.

A starting point for discussing what is possible to accomplish at the summit and beyond would be to examine what each side wants.  The US demand for “comprehensive, verifiable, and irreversible denuclearization” is seldom unpacked to look at what is most urgent, what can wait, and what is technically impossible. As for the DPRK’s wish list, there is a lot of uninformed speculation in the news about a Marshall plan, written security assurances, the end of the alliance with South Korea, the abandonment of the nuclear umbrella, and the withdrawal of US forces, none of which Kim is demanding.

A May 31 Washington Post article by Missy Ryan, David Nakamura and Karen DeYoung offers a more promising appreciation of what Kim wants:

Former U.S. officials said Kim’s overarching objective is aimed at achieving what his father and grandfather were not able to do: break what the regime has called the United States’ “hostile policy” that has existed since the Korean War armistice in 1953. That goal has been elusive despite attempts over the past quarter-century to cement lasting deals to freeze or end North Korea’s nuclear program. …

Experts said a summit might lead to an effort to forge a peace treaty formally ending the war and establish diplomatic relations in the form of a liaison office in the respective capitals.

Kim is also likely to demand that the United States remove North Korea from its list of state sponsors of terrorism, a designation that was reimposed last fall. Such a move would be mostly symbolic, given the breadth of economic sanctions that would remain in place until the North took verifiable steps toward denuclearization. …

The military exercises the United States conducts with South Korea are a more likely short-term target for North Korean officials, who depict them as rehearsals for an invasion or regime change. Pyongyang objects particularly to the participation of advanced and nuclear-capable weaponry in any exercise, such as the F-22 stealth fighter and nuclear-capable naval assets. Adjustments to training and exercises probably would pose no serious threat to the U.S. military posture, analysts said, while rewarding Kim with a political win at home. “It would be helpful to consider ways to modify those missions,” said Frank Aum, a former Defense Department official. The Pentagon might, for example, alter training missions it conducts for B-52 bombers located in Guam and B-2 stealth bombers, which occasionally have flown over the Korean Peninsula, and reconsider sending carrier strike groups to waters off the Korean Peninsula.

Trump and his Secretary of State, Mike Pompeo, seem aware of the Kims’ desire to end enmity and have taken steps to address it. What better way to start than to sit down at the negotiating table with Kim Jong Un or to say, as the President has, that he is prepared to negotiate an end to the Korean war and to normalize relations–something his predecessors never did. Ultimately, he may have to find a way to forge an alliance with Pyongyang alongside the one with Seoul. How else to assure Kim that he will be secure enough to consider yielding his nuclear arms?

But don’t take my word for it. Report the real news.