An ebullient President Trump flew home Tuesday with what he called a “very, very comprehensive” agreement with North Korea, even as lawmakers, analysts and allies congratulated the effort but questioned the substance of what had been achieved.

The brief document signed by Trump and North Korean leader Kim Jong Un provided virtually no detail beyond a stated commitment to “denuclearize” the Korean Peninsula, a promise that Pyongyang has made and ignored many times in the past.

President Donald Trump sold his nuclear agreement with North Korea on Tuesday as different from—and better than—any that’s gone before. Measured against previous deals, though, the two-page document had similar language and was distinct mainly for being vague.

The statement Trump signed with North Korean leader Kim Jong Un committed them both to the “complete denuclearization” of the Korean Peninsula, as well as to a new relationship, a peace regime and security guarantees, none of which were defined. The omission of the words “verifiable” and “irreversible” from the phrasing on denuclearization suggested North Korean resistance to Trump’s requests.

President Trump’s praise for Kim Jong Un’s authoritarian rule in North Korea—and his apparent envy that people there “sit up at attention” when the 35-year-old dictator speaks—marked an escalation of the American president’s open embrace of totalitarian leaders around the world.

Reflecting on his impressions of Kim following their Singapore summit, Trump told Fox News: “He’s the head of a country, and I mean he’s the strong head. Don’t let anyone think anything different. He speaks, and his people sit up at attention. I want my people to do the same.” It was unclear whether Trump was referring to Americans generally or only to his staff. 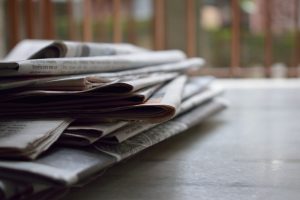 For all the talk of journalistic competition and investigative journalism, once a story is framed, the news media find it difficult to break that frame. And the frame for nuclear diplomacy with North Korea—to put it simply—is that a naïve, uninformed and self-aggrandizing President Trump, too eager to declare success, was taken to the cleaners by a clever, but deceitful North Korea, kowtowed to a dictator, and even had the effrontery to exchange salutes with the KPA defense minister.

These ledes all miss something obvious and essential: the President of the United States spoke respectfully with the leader of an enemy state and signed a joint statement with him, then announced he was suspending joint military exercises with South Korea. To Pyongyang, which had long conditioned denuclearization on the end of what it called US “hostile policy,” these were disarming gestures.

The framing of Trump’s nuclear diplomacy led reporters to stick to “he said, she said” journalism, quoting first the president, then his critics, instead of trying to dog down the missing details.

At least one lede broke the frame and grasped the essential point of the summit:

With the task ahead to make the agreement concrete, Secretary of State Mike Pompeo is scheduled to travel to Seoul on Wednesday for talks with South Korean and Japanese officials, followed by a trip to China. The decision to cancel the exercises, the refining of the timetables for denuclearization and possible future sanction relief are expected to be on the agenda.

But most stories characterized the summit as a “victory” for North Korea—as if the score after the first inning is what mattered. They might not have even gotten the score right since most stories neglected to point out that Kim Jong Un at halted nuclear and missile tests before he had an ICBM (that requires a reentry vehicle and proven guidance) or a proved two-stage thermonuclear weapon.

The unstated assumption seemed to be that negotiations are boring. It is more entertaining to warn of the coming war, or when that possibility has receded, to cover the conflict between Trump and his detractors. The consequence was that important details got lost in the noise.

For instance, Secretary of State Pompeo after meeting with his key North Korean interlocutor Kim Yong Chol, was asked why the talks ended so soon. Without hyperbole in a “just the facts ma’am” tone of voice, he replied “We didn’t end the talks early. We had a set series of items that we wanted to make sure we covered, topics which we made sure that we were clear on in terms of what our expectations were and their expectations in return of us. We achieved that.”

In a June 7 interview with NHK, Pompeo let a bigger cat out of the bag, hinting at a possible alliance long sought by North Korea: “We want to achieve a fundamentally different strategic relationship between our two countries.” Reporters showed scant interest.

At a June 13 briefing in Seoul, Pompeo got testy when reporters asked why the joint declaration did not use the words “verifiable”: “Let me assure you that the ‘complete’ encompasses verifiable in the minds of everyone concerned. One can’t completely denuclearize without validating, authenticating—you pick the word.” Most stories dwelt on that contretemps without noting the news that there was more agreed than what was contained in the joint statement or announced separately: “There was a great deal of work done over days and days and days in Panmunjom that led to the discussions that took place there in Singapore for whatever it was, 70 hours or 60 hours, whatever the two sets of teams were on the ground. So, there’s—not all of that work appeared in the final document, but lots of other places where there were understandings reached.” In short, stay tuned.

As long as reporters focus on President Trump’s hyperbole and his critics’ doubts, they will assure that the news will generate more heat than light and leave observers in the dark.