Ask a North Korean: Defectors Talk About Their Lives Inside the World’s Most Secretive Nation
By Daniel Tudor. Tuttle Publishing, March 20, 2018. 288 pp. 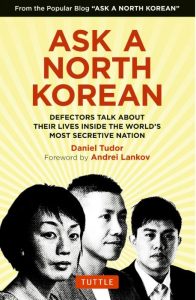 Daniel Tudor’s Ask a North Korean: Defectors Talk About Their Lives Inside the World’s Most Secretive Nation offers a raw and unfiltered account from seven defectors on a variety of questions of daily life in North Korea. The author clearly lays out his purpose to humanize North Koreans and provide the reader “a true picture of North Korea straight from the horse’s mouth” (9). Tudor recognizes early in the book that defectors are not necessarily reflective of broader North Korean public opinion, but this common objection to defector-based reporting does not seriously interfere with the accounts, which are mainly non-political. The book consists of twelve thematic chapters on issues ranging from views of the outside world to fun and leisure. The author provides a brief overview of each chapter and each question posed to the defectors and leaves most of the space to record their responses.

The book has several assets and limitations. It is a good introduction for those looking for a light read on North Korean society. The reader can easily turn to chapters out of order on issues that interest him or her as each chapter and question is freestanding. The introduction promises fascinating tidbits of fact and opinion from defectors, and it delivers. The defectors describe how post-famine markets created a taste for foreign goods but have not disbursed foreign information due to fear of surveillance at the markets, double eyelid surgery and nose jobs are the most popular forms of plastic surgery, malnourished conscripts return home to recover, and elections are national celebrations with singing and dancing. Interviewees share opinions that South Korea’s brand of capitalism is driving its high suicide rate, books that pass North Korean censors are still entertaining, and living in Pyongyang is prestigious. The pieces of fact and opinion recorded in the book are diverse, and the author leaves it to the reader to decide which are most central. Each reader is likely to have distinct takeaways from the book that has as its expressed purpose to shed light generally on North Korean daily life.

Ask a North Korean hits its sweet spot when it focuses on first-hand observations and opinions like those noted above, but it raises source credibility challenges when it strays into areas beyond the interviewee’s demonstrated expertise. For example, the first question posed in the book pertains to North Korea’s tax policy. One defector, Kim Yoo-sung, provides a detailed description of the North Korean regime’s effective means of withholding a portion of domestic production, history of abolishing taxes, provincial- and national-level debt, and comparatively regressive tax system. Tudor does not tell the reader if Kim worked as an accountant or official in North Korea that may provide Kim particular insight on these matters. We only know that Kim defected thirteen years ago and is commenting on economic practices today.

The reader needs more information about the sourcing throughout the book to judge the veracity of a variety of statements. For example, interviewees discuss the functions of North Korea’s secret police consistent with views commonly expressed outside of North Korea. They also describe the extent of disease, three-year life expectancy in prison camps and the specific North Korean systems running the penal institutions. If the defectors had credible access to this sort of information, the author does not share that expertise with the reader. Also, Tudor notes in passing that at least some of the information from the defector sources was “commissioned,” raising the question of whether the interviewees were paid. Paying interviewees, or “essayists” responding to written interview questions, is a controversial practice that can incentivize interview subjects to say what he or she thinks the interviewer wants to hear—or simply fairly compensate the interviewee for their time. Whether one finds this practice acceptable or not is debatable, but greater transparency from the author would help the reader judge sourcing.

Further, information on the seven interviewees that make up the vast majority of the book is inconsistent and sporadic. Tudor says the seven defectors represent a range of genders, ages, and socio-economic backgrounds, but it is difficult to verify this. On age diversity, for example, Tudor notes four of the seven are in their 20s or 30s, two are students without an age range provided, and one has no information on this score. Most of the interviewees are men, though most North Korean defectors are women. The timeframe when each defector last lived in North Korea is not clearly laid out. The reader learns on page 68, for example, that Ji-min Kang last lived in North Korea thirteen years ago but is making claims about life there today. He may maintain contacts in North Korea to substantiate these views as current, but the author leaves the reader to guess. Lastly, Tudor also uses unnecessary hearsay. In one instance, a male defector—who met his defector wife in South Korea—recounts her childhood experience in North Korea as a member of a wealthy family. If you asked me to tell my wife’s childhood stories, I would get much of it wrong. Likewise, interviewing the woman directly would have allowed a more accurate and credible source of information.

The “person on the street” approach allows greater storytelling, but it raises natural questions on whether a view is representative. Claims that “many people” blame the United States and sanctions for North Korea’s poverty, “everyone” knows about prison camps, and “people” are proud of the North’s nuclear program are not a major problem. Critical readers should be able to identify these claims as one person’s view that they have extended to a broader group. However, the author misses an opportunity to leverage other outside research to contextualize the defectors’ accounts and his own. For example, when the author says “probably a majority of the population” has watched South Korean TV, the Intermedia survey on this topic could have allowed greater specificity and perhaps led him to moderate this statement.

Ask a North Korean does not need to be a research monograph to be valuable, but some research to contextualize the author’s comments could have made the introductory materials more illuminating. Also, there are many ways to process defector accounts to build understanding. Good examples include careful ethnographies like Marching Through Suffering, cross-referencing defector accounts for accuracy like those published by the Database Center for North Korean Human Rights, or structured surveys of defectors such as Witness to Transformation (or surveys of those who have stayed behind like A View Inside North Korea). This can be a painstaking process, but it pays dividends in allowing the author to make supportable claims. Absent some means to judge the validity of new and surprising information, readers run the risk of believing what they already know and dismissing the surprising. Unfortunately, this means the specialist will have a difficult time learning something new from this book.