One task ahead for the United States and North Korea if current denuclearization negotiations continue will be to conduct an onsite inspection of the now shut-down Punggye-ri nuclear test site. That inspection will have limited utility—there are no guarantees that North Korea would not resume testing at Punggye-ri or other locations if the current thawing of the political atmosphere ends. But the successful conduct of such an inspection would serve to not only build confidence between the US and North Korea but also as an initial model for cooperation for future inspections to help verify agreements covering North Korea’s weapons of mass destruction and ballistic missiles.

Current Status of the Test Site

Contrary to numerous media reports, while previous nuclear detonations at the Punggye-ri nuclear test site may have necessitated abandonment of further testing directly under Mt. Mantap, they likely did not irreparably alter the integrity of geology in the adjacent mountains to the south and west where other test tunnels have been excavated. The extent of the destruction of those areas irrespective of North Korea’s closing of the tunnel portals remains unclear. As a result, they could potentially be reopened, or new tunnels could be excavated nearby should Pyongyang decide to resume testing.

In addition to reclamation activities in the Main Administrative Support Area, which was previously demolished (Figure 1), commercial satellite imagery from late November shows that the two largest buildings at the Command Center remain intact (Figure 2), as do various nearby support facilities for personnel and security forces. This suggests the site may only be mothballed, with reactivation possible. Approximately two-dozen personnel were also visible onsite in the Southern Support Area (Figure 3) providing additional evidence that the test site has not been fully abandoned. The roads throughout the area remain well maintained, and vehicle tracking has been evident on the main road leading to the test area where patchy snow was present. 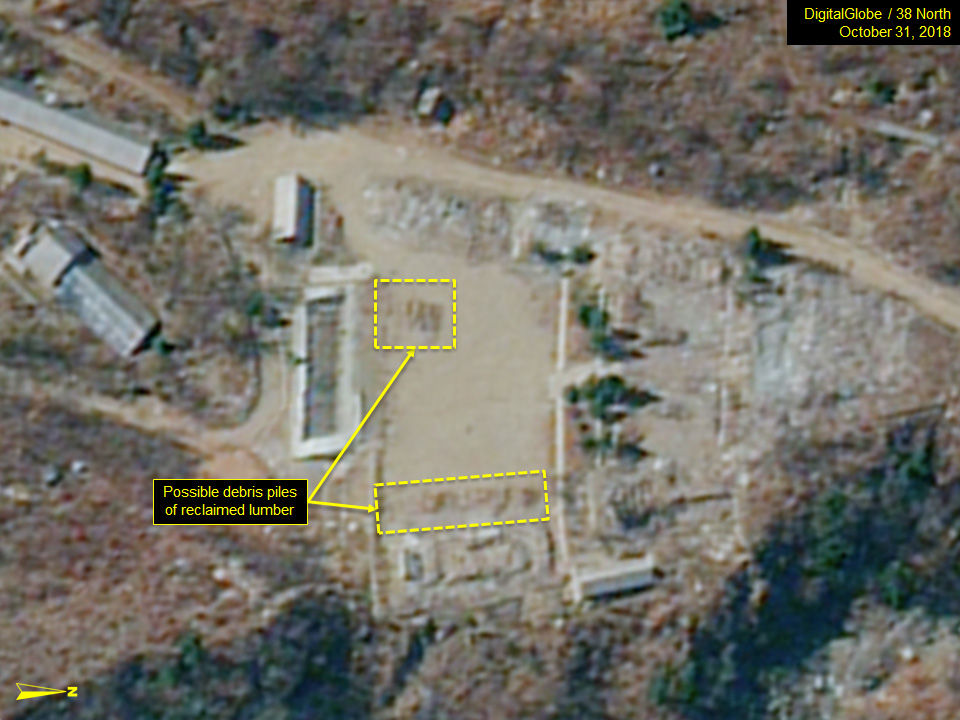 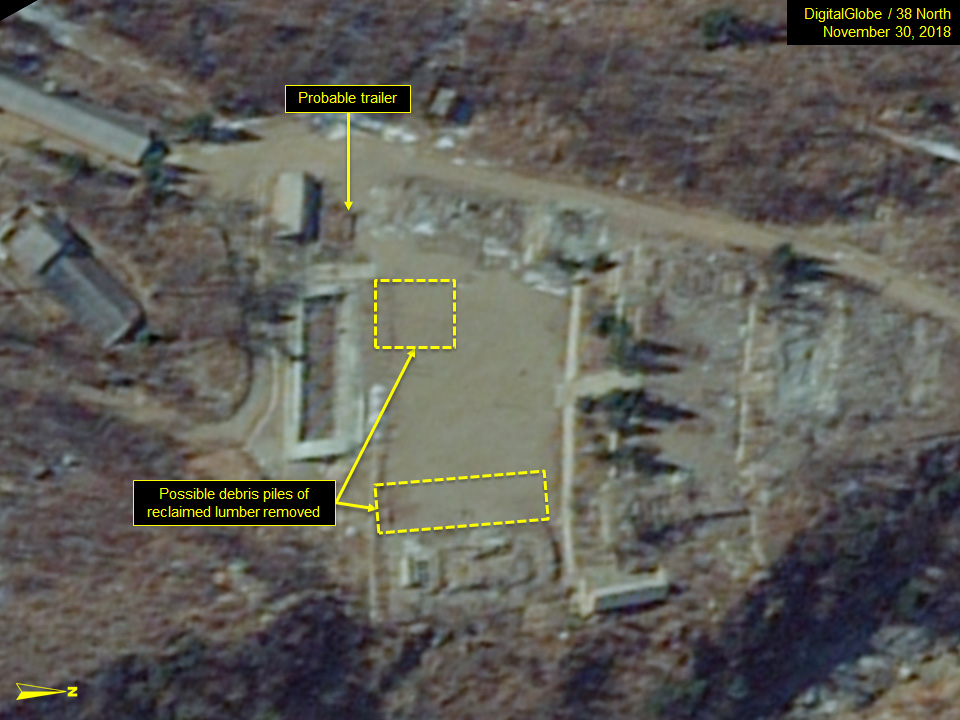 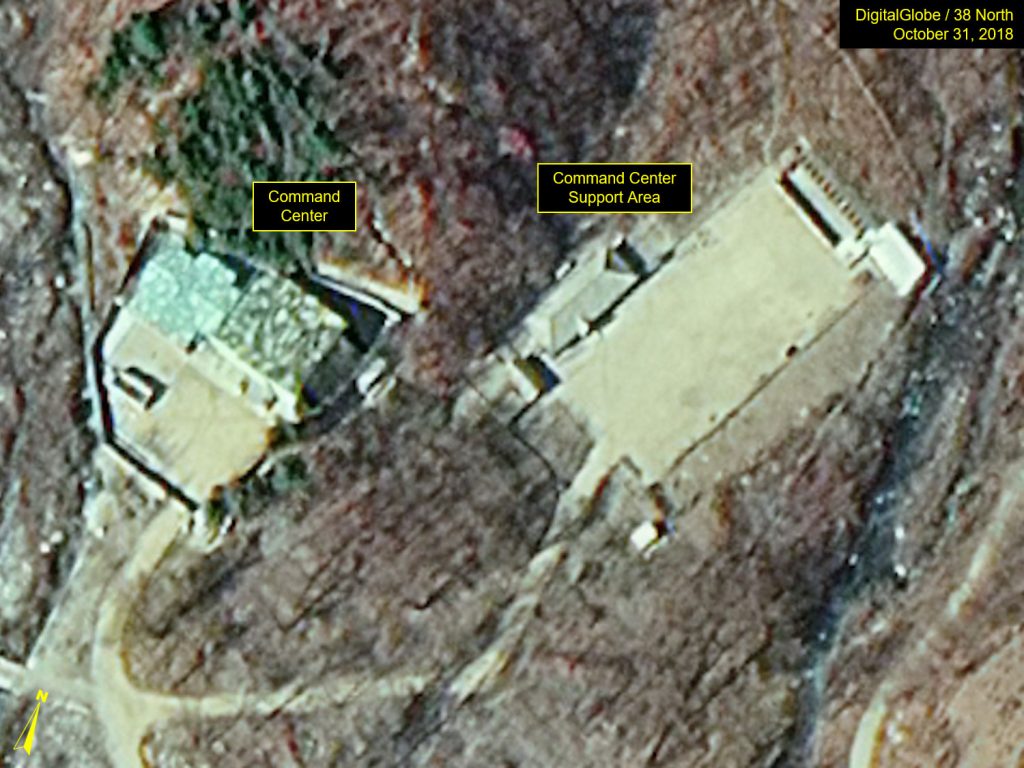 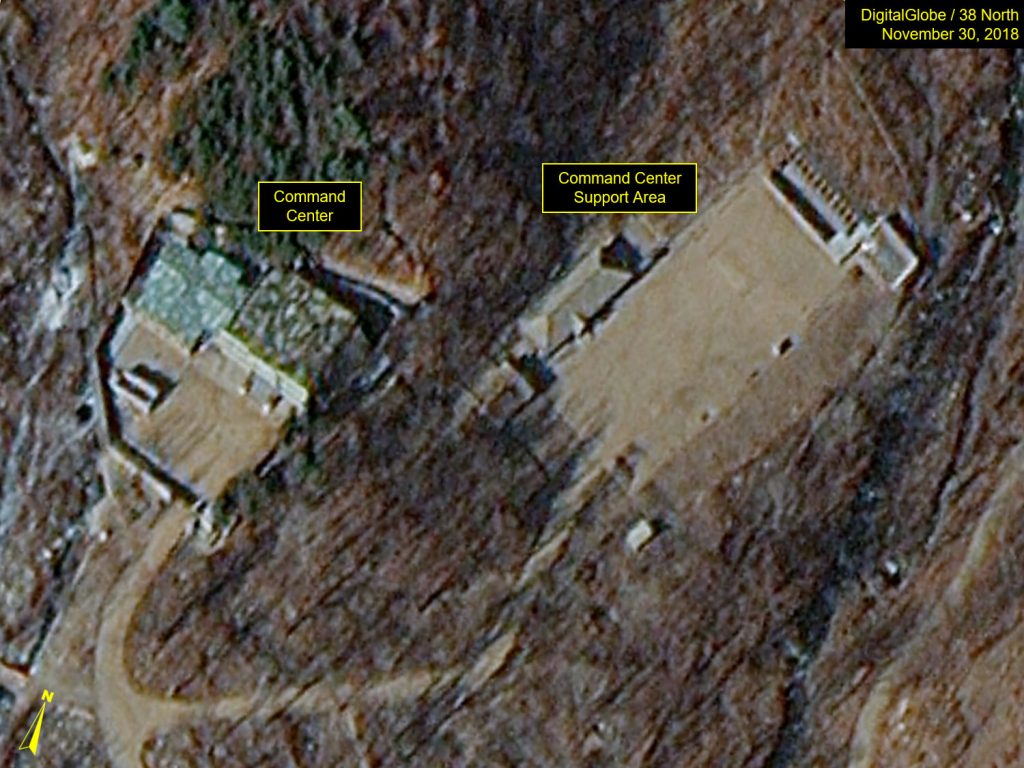 The Role of Onsite Inspection

One potentially effective means for more accurately assessing the test site’s viability for renewed nuclear testing would involve a thorough reconnaissance through onsite inspections. Following the Pyongyang Joint Declaration of September 19, 2018, it was reported that, inter alia, North Korea might allow international inspectors to verify the closure of the Punggye-ri Nuclear Test Site. More recently, Kim Jong Un, in the course of the October 7 meeting with US Secretary of State Pompeo, is reported to have “invited inspectors to visit the Punggye Ri nuclear test site to confirm that it has been irreversibly dismantled.”

It is already clear that the site has been shut down and the tunnel portals have been closed. (Figure 4) If reports about Kim’s pledge to Pompeo are correct, and the goal is to verify “irreversibility,” that may prove to be a challenging task. At the very least, if the orders came from Pyongyang, the North Koreans could excavate new tunnels that could be ready in a few months. Therefore, a more reasonable standard would be that the existing facility could not be readily reopened and that any effort to do so could be quickly detected, not just by satellite imagery, but also by monitoring events on the ground.

Figure 4. Tunnel entrances, such as here at the North Portal, have clearly been closed. 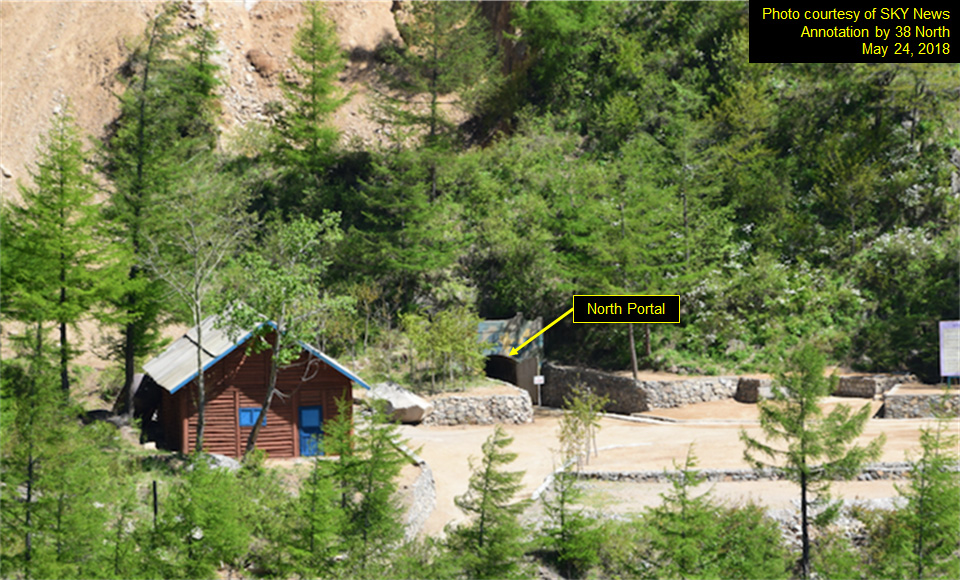 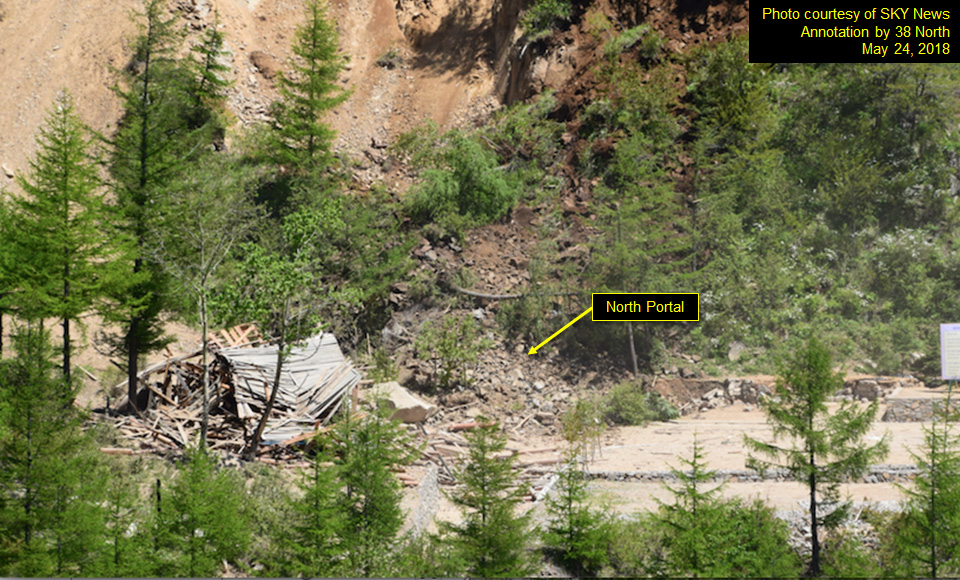 Who Would Conduct the Inspection?

Shortly after reports that North Korea would allow an inspection, Lassina Zerbo, the Executive Secretary of the Comprehensive Nuclear-Test-Ban Treaty Organization (CTBTO), responded on Twitter that while there is no regime currently in place to verify the shut down of a nuclear test site, “We have in-house knowledge & equipment ready to deploy should Member States decide & call upon us to do so/ if requested.” Figure 5 shows a variety of the CTBTO subsurface detection and mapping equipment as posted by Dr. Zerbo. However, the use of such instrumentation at Punggye-ri may be difficult since the terrain is far from flat, and hundreds of meters of hard igneous rock separate the mostly horizontal tunnels from the surface.

Figure 6. The steep terrain of Mt. Mantap may be problematic for CTBTO equipment.

In addition, other possibilities mentioned in the press are that the United States, the International Atomic Energy Agency (IAEA) and representatives from the P-5 nuclear weapon states would conduct inspections.

To help ensure success, inspectors would have to be allowed to conduct a number of activities, which should be agreed upon with North Korea in advance of any mission. Such activities would include the following.

First, inspectors should be allowed to visit all key nuclear test areas at the Punggye-ri site, including the East Portal which was subsequently abandoned after North Korea’s first nuclear test in 2006. That area was not visited or observed by the media during the test site closure in May 2018.

Second, while it appears the tunnel portals were explosively closed, the areas extending beyond the portals could have remained largely intact. One way to verify the extent of the collapse of each tunnel beyond just the portal areas would be to employ the use of heavy equipment like a mobile horizontal or vertical drill rig to verify just how far back a tunnel has or has not been collapsed. This would require significant logistical planning and days or weeks to execute. If it is discovered that the tunnel areas beyond the portals have remained intact, that would call into question the “irreversibility” of the initial destruction and would probably have to be the subject of further discussion between the US and North Korea.

Third, inspectors should be provided with detailed tunnel layout maps (engineering blueprints) and allowed to confirm them to ensure that areas have not been walled off or not included in procedures to shut the site down. The tunnel layout map the North Koreans provided to the media was overly simplified even though the test locations shown on the map do conform quite well with geo-locations developed through remote sensing.

Fifth, the inspection team should establish a full site baseline to measure against any future activities. That baseline would involve various site surveys (surficial and sub-surface) to determine the geological, geophysical and hydrological settings for improved site characterization, surface mapping to establish the full extent of previous test-induced surface effects, e.g., landslides, on and around Mt. Mantap,[1] along with environmental sampling at various locations near and away from the portals. Such a baseline would make it easier to assess the source and extent of any changes detected during future site monitoring.

Sixth, inspectors should be allowed to install on-site instrumentation like seismic, acoustic/infrasound and radiological sensors, intended to help verify that no new tests could be undertaken at the site without detection.

Finally, an additional measure would be to request that North Korea hand over the diagnostics and instrumentation equipment used at the site so that it cannot be reused for future nuclear testing. Such a step would at best be a confidence building measure and, in all likelihood, not affect the North’s ability to restart testing since it probably has additional sets of equipment stored elsewhere.