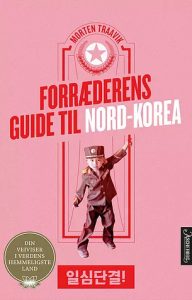 Morten Traavik is a controversial multimedia artist from Norway, who has been spearheading the Norwegian and international cultural exchange with North Korea since 2008. The highlights of this exchange included bringing to Pyongyang in 2015 the first ever Western rock band to play there, an avant-garde Slovenian collective called Laibach. The details of Laibach’s trip to North Korea were captured in a prize-winning documentary, co-directed by Traavik. On the whole, Traavik has been in North Korea over 20 times, visiting nine of its twelve provinces. The book under review is an upshot of what he has seen and learned on the way, engagingly and wittily formulated.

But why the title, “A Traitor’s Guide?” This is probably a reference to the fact that Traavik’s work on the DPRK’s and Norway’s cultural rapprochement has upset both right-wing politicians and human rights activists at home, where in 2012, Traavik was publicly branded North Korea’s “useful idiot.” North Koreans have their reasons to feel suspicious of Traavik’s activities, too. By his own admission, he effectively infringes upon what he terms “the North Korean regime’s strict ban against Western culture in all its forms” (30).

A Traitor’s Guide retains much of a traditional travel guide content, with sections on the country’s history, places of interest, language and cuisine, etc., as well as further reading suggestions. However, some material (e.g., Korean food recipes) is not confined to one place alone but comes up at intervals throughout the book. This makes for a somewhat patchy presentation, but perhaps it was necessary to give more structure to the components that could mostly be fragmentary, accidental and uneven in size, despite the author’s best efforts. This is not to say that Traavik’s book is haphazard and casual. Aimed at non-specialists from different walks of life, it simply serves as a colorfully packaged and easily digestible assortment of facts and opinions that could be beneficial as an introduction to the DPRK for those readers who are not familiar with the country.

A Traitor’s Guide describes North Korea as follows: “Similar to many other developing countries, it is possible [here] to travel through several time periods while moving just within one city: Pyongyang has small pockets of here and now, somewhat bigger pockets of the 1990s, even bigger areas of the 1980s and large areas of the 1950s and 1960s. Ten minutes outside Pyongyang—and you are in the 1930s or even further back in time” (90). China is named as “the most optimistic example of which direction North Korea could eventually develop towards” (233).

However, in Traavik’s opinion, the prospects of such a development are rather remote. Even after having seen the special economic zone in Rason, he likens the DPRK’s economy to a “banana republic that exports raw materials, such as coal, minerals and seafood, to China in exchange for hard currency” (234). Traavik is aware of the DPRK’s current appetite for joint ventures (and has himself been approached more than once by North Korean diplomats and officials with the suggestion to co-establish a company) but considers it to be more trouble than it’s worth:

“In the North Korean vision of the world, ‘joint venture’ in fact most often means this: You [the foreigner] do all the work, pay all expenses and bear all the risks, and in return we [the North Koreans] will maybe share some of our maximum possible profits with you—unless…our state expropriates the entire enterprise quite suddenly and without a warning” (227).

Traavik also reminds the reader that Swedish suppliers, for example, still have not received any payment for the goods delivered to North Korea in the mid-1970s (1,000 Volvo 144 models among them). Today, the DPRK’s debt to Sweden exceeds 2.7 billion Swedish crowns (krona) or $292 million USD.

Not that no one has ever tried to recover this debt. Traavik relates the little-known story of how the Norwegian entrepreneur Morten Jølle in the late 1980s-early 1990s devised an audacious plan to buy the DPRK’s Swedish debt, overtake the Gothenburg-based Götaverken shipbuilding company that went bankrupt in 1989, dismantle the shipyard equipment and move it to the North Korean port of Wonsan, where the DPRK would start building vessels for the international market while gradually paying off its restructured debt. The plan did not materialize, because at the last moment the Swedish government provided guarantees to keep the shipyard in Sweden (139-40).

The effects of North Korea’s struggling economy can be seen in what is purported to be the country’s pride and joy, namely its armed forces. As an eyewitness at a North Korean military parade, Traavik was not overly impressed by the DPRK’s martial might, especially as far as conventional weapons are concerned. The infantry in procession reminded him of a “masquerade ball, with the ‘Red Army 1960’ theme and the aging weaponry, whose spare parts are progressively hard to find” (172).

The North Korean state apparatus—something that Traavik had to deal with over and over again—does not earn much praise from him either. At an individual level, Traavik appreciates the assistance given to his projects by some officials at the DPRK’s Committee for Cultural Relations with Foreign Countries (CCRFC). His book is interlaced with his private, mostly very friendly (fictionalized?) letters to one such official. As an institution, however, in Traavik’s opinion, the North Korean officialdom is marred by a “decision anxiety, collective responsibility, poor communication between different sectors and branches, and desire to save your own skin” (294). On this basis, one may surmise that in some aspects North Korea does have things in common with quite a few other countries.

As for ordinary North Koreans and the oft-repeated question as to why they appear so susceptible to state propaganda, Traavik offers two principal explanations, one emphasizing the universality of human experience and another being a little more nation-specific. Here is the former: “Like everywhere else in the world, people believe in what to an extent is an advantage for them to believe in. Faith, in spite of everything, is opium for the masses that reduces…the painful disparities between the world as it is and the world as it should be” (204).

The second explanation comes from Traavik’s background in theatre, which he studied, among other places, in Moscow in 1993-94. He apportions a degree of responsibility for North Korea’s theatrical and demonstrative society to Soviet/Russian cultural influence, in particular to the ideas of the theatre director Konstantin Stanislavsky (1863-1938), who advocated an identification between an actor or actress and his/her character (209-11).

Traavik does not fall deferentially silent when it comes to the DPRK’s top leaders. Of North Korea’s three successive rulers from the Kim dynasty—referred to as “the holy trinity” (299)—it is the second who is portrayed most critically, including his external appearance. Traavik calls him a “Gollum, as opposed to his father’s Aragorn,” (152) and “a cross between Liza Minnelli in her mature years and a Mao impersonator, just over a meter and a half in height” (154). By contrast, Kim Jong Un, in Traavik’s view, positions himself as a “reincarnation of the Great Leader, the country’s founder [i.e., Kim Jong Un’s grandfather Kim Il Sung], and everything that North Koreans are encouraged to associate with him, only in a new and modern edition” (222).

The undeniable modernization under Kim Jong Un, however, should not be mistaken for “broad-mindedness and belief that people can do what they want” (235), Traavik warns. If anything, he has found the dynamics of Kim Jong Un’s regime to be negative, evolving from a “gently blossoming openness” to a “progressively tighter…control over the population” (325). As a result, Traavik had no other choice but to suspend his cooperation with North Korea in 2017.

All in all, he defines his experience with North Korea as “a very special mixture of something alien, beautiful, unpleasant, touching and unsettling” (41). Is this conclusion going to make Traavik’s Norwegian readers queue for tourist visas to the DPRK? Not very likely, given the book’s overall bleakish tone and the history of the two countries’ diplomatic relations since their establishment in 1973. Soon after, in 1976, a number of North Korean diplomats were expelled from Norway (and Denmark) for smuggling marijuana and cigarettes. “The direct DPRK-Norway diplomacy has not quite recovered from the shock ever since” (137), Traavik says. In 1992, the North Korean embassy in Oslo closed down altogether, as a cost-cutting measure. Between the early 1970s and now, only a handful of Norwegians seem to have gone to the DPRK, on business or otherwise.

Traavik mentions two such individuals: the author, musician and former left-wing politician Morten Jørgensen, who visited North Korea in 1977 and found it to be a “joyful Christian summer camp” (97); and the IT specialist Bjørnar Simonsen, a sometime international counsellor at the Korean Friendship Association, who traveled to the country in 2004 to see “the worker’s paradise” (264), as he phrased it. If people like Jørgensen and Simonsen are representative of Norwegians who come to visit the DPRK, Traavik’s book may well serve as a deterrent to more visitors. If so, it will be fulfilling pretty much the same function as the international sanctions against North Korea that Norway supports.

The book’s significance, however, clearly transcends its Norwegian context and readership. Partly because A Traitor’s Guide demonstrates that an intelligent, well-informed, critically minded and unbiased participant-observer is not always unavoidably impeded by the lack of advanced language skills (Traavik’s Korean is not fluent). Also, perhaps more importantly, the book shows that progress and success in Western dealings with North Korea are achievable, at least in the sphere of culture (for the time being, anyway). This is why Traavik’s guidebook will undoubtedly be useful not only to Norwegian speakers but to anyone interested in North Korea, wherever they are. The rights to a German translation have already been sold, it appears. Let us hope that an English edition will follow suit.