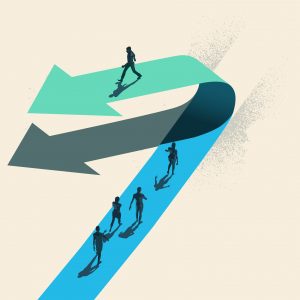 One of the most consequential shifts in American foreign policy may occur sometime before the 2020 election. Conditions are ripe for a Republican president to strike a deal that could substantially reduce but not eliminate the North Korean nuclear threat. Republican acceptance of such a deal, even as an “initial” agreement with the promise of more to come, would undo a few decades of bipartisan orthodoxy requiring the irreversible denuclearization of North Korea.

Altering the Republican platform along these lines would be significant. It could also pave the way, potentially, for a paradigm shift in favor of negotiating with hostile states to address specific threats, rather than treating the regimes that govern them as the fundamental problem to be solved. That would mark a dramatic change in US foreign policy but it would be consistent with the preferences of a majority of American voters wary (and weary) of confrontational approaches leading to costly, open-ended military entanglements they feel have failed to serve US interests. It would also enhance America’s strategic position and options in a rapidly evolving international system that the United States may eventually no longer dominate. US-DPRK nuclear talks are heading in a direction conducive to these major policy shifts.

North Korean leader Kim Jong Un is playing a strong negotiating hand. Despite the pressure of massive economic sanctions, he rejected US President Donald Trump’s “grand bargain” of irreversible and immediate denuclearization for significant sanctions relief in Hanoi in February. There is no sign of new incentives or threats to change Kim’s calculus. Post-Hanoi, he is also in the unprecedented position of being courted simultaneously by the leaders of China, South Korea, Russia and Japan. If he continues to play his cards well, he could acquire additional diplomatic tools to moderate US demands and lower the odds of the United States sustaining a strong, broad-based sanctions regime against North Korea.

Domestically, Kim Jong Un has managed the impact of returning empty-handed from Hanoi and kept engagement viable. He and Trump were careful to show they parted on good terms, and initial coverage of the summit by North Korea’s state-run media was largely positive. President Xi Jinping’s recent visit to Pyongyang displayed Chinese support for Kim, and in recent months, Kim has prepared the way internally for resuming negotiations, including the potential for talks to end in failure. His post-Hanoi exchange of letters with Trump also kept the President engaged. Their subsequent historic meeting in the Demilitarized Zone (DMZ) separating North and South Korea on June 30 reinforced the North Korean leader’s case for engagement to his domestic audience.

President Trump continues to negotiate without preconditions, but there is considerable ambiguity about what proposal his administration will put on the table. His pro-war National Security Advisor, John Bolton, was conspicuously absent when Trump became the first sitting US president to set foot in North Korea. Bolton’s absence underlined Trump’s interest in a negotiated solution to the nuclear issue. That said, Bolton has been marginalized before, only to return as the “bad cop” throwing Pyongyang off balance. The uncertainty over Trump’s bottom line, coupled with his abrogation of the Iran nuclear deal and return to harsh sanctions against Iran, have almost certainly fostered greater North Korean distrust of Trump’s intentions and chilled any inclination, if there ever was one, to denuclearize.

Not in doubt is the rare opportunity to negotiate a deal that could last beyond a single US administration. If Trump’s gambit produced a verifiable freeze monitored by international inspectors; caps on nuclear weapons, missiles and fissile material; permanent dismantlement of key facilities at Yongbyon; and a formal North Korean commitment to halt the testing of nuclear weapons and long-range ballistic missiles (used to develop a deliverable nuclear warhead), the region, the world and America would be safer. The fine print, of course, will matter.

At the moment, the North Koreans are fixated on securing substantial sanctions relief without irreversible denuclearization, which they will not and should not get. They are overlooking a powerful incentive to accept much less on sanctions lifting in exchange for substantially reducing the threat posed by their nuclear weapons program: Donald Trump owns the Republican party. He could deliver a pragmatic Republican policy platform on North Korea and possibly secure a nuclear deal ratified by Congress.

GOP lawmakers are already on record insisting that Trump ratify any deal he negotiates with the North, which would require some Democratic support to reach the 67-vote threshold in the Senate. Even if they disliked the deal, Republicans can be expected to fall in line with a president whose approval rating in some polls stands at 89 percent among Republican voters. And heading into the 2020 elections, some Democrats would want to be on record supporting a deal that offered credible prospects for improved security. Polls show that Americans overwhelmingly do not support military options to achieve the denuclearization of North Korea. Significantly, even though a majority believe North Korea is capable of striking the United States, seven in ten still support direct talks, reflecting a risk aversion to the use of force and the attendant possibility of a long-term, costly military engagement that does not make Americans feel safer.

A ratified agreement would inject structure and predictability into relations between Washington and Pyongyang, although a future US president could still withdraw from the deal. President George W. Bush in 2002 withdrew from the 1972 Anti-Ballistic Missile Treaty with scarcely a whimper of opposition. For three decades, however, the treaty drove strategic relations between Washington and Moscow and facilitated an expansion of bilateral arms control agreements. Similarly, a North Korea nuclear treaty could establish a foundation for working, in partnership with Seoul, on additional steps to improve security and stability on the Korean Peninsula. Despite these friendlier circumstances, however, US-DPRK relations would remain essentially adversarial. Even if both sides committed to signing a peace treaty and opened diplomatic offices in capitals, Washington would continue to treat the interests of its allies as paramount, until issues ranging from Pyongyang’s conventional military posture to human rights abuses were resolved. Admittedly, this would not be easy. Conflicting interests would cause tensions to flare, but alliances should remain vital and strong if properly managed.

Washington’s foreign policy establishment and political elites can debate whether substantially reducing Pyongyang’s nuclear threat today, or waiting indefinitely to eliminate it, best serves US interests in Asia and the goal of halting the spread of nuclear weapons. As the North Korean regime has defied the odds with its longevity, the logic behind waiting has lost its persuasiveness. The tools to achieve irreversible denuclearization peacefully are also inadequate.

The Obama administration considered Iran-style secondary sanctions against North Korea, but 90 percent of North Korean trade is with China, which would have to be massively targeted to replicate the Iran case. The administration chose not to risk the consequences. Reversing course in September 2017, the Trump administration adopted secondary sanctions and sanctioned a few Chinese companies but has shown similar restraint. As former President Barack Obama explained regarding Iran, cutting off China from the US financial system would trigger severe disruptions in the US economy and affect the dollar’s role as the world’s reserve currency.

Secondary sanctions will not work with North Korea because the costs to the US economy of massive sanctions against China, the world’s second-largest economy, are unacceptable. Beijing also has ways to selectively abide by sanctions. China could channel North Korean trade through an already sanctioned bank, keeping its other banks “clean,” a workaround China used with Iran. With 70 percent of North Korean trade passing through the Chinese border city of Dandong, Beijing can crackdown, or look the other way, as it already does. It is instructive that, despite the imposition of US secondary sanctions, China is preparing for more, not less, trade with North Korea by expanding border infrastructure, and among the record number of foreign companies attending North Korea’s international trade fair this year, half were Chinese.

By contrast, secondary sanctions dealt a severe blow to Iran’s economy for reasons that cannot be replicated with North Korea. Unlike North Korea, Iran is connected to the global economy through extensive, US dollar-dependent trade and financial relationships, and its trading partners include economic powerhouses, like China and the European Union. Iran is also a top global exporter of oil and gas and depends on these revenues for growth. Therefore, more countries, including major economies, are vulnerable to US secondary sanctions in the Iran case, and their economic incentives to comply vastly outweigh any political inclination to withhold cooperation. Shutting down their high-volume and high-value trade has devastated the Iranian economy.

To be sure, sanctions have hurt the North Korean economy and may have contributed to Kim Jong Un’s decision to meet with Trump in June 2018. However, they were insufficient to pressure him to even consider Trump’s offer in Hanoi eight months later. That is not surprising. Exponentially more crippling sanctions failed to pressure Iranian leaders to consider any deal the Obama administration tabled in nuclear negotiations. The deal had to be reasonable, and Iran had to feel confident sanctions would be lifted. Back-channel talks preceding the negotiations helped build confidence. Crucial incentives, however, included US willingness to allow some domestic enrichment in Iran and to handle missiles outside the nuclear deal, at the UN Security Council. These compromises were arguably more important than sanctions pressures.

Change the Paradigm, Strengthen America’s Strategic Position in a World in Disarray

In supporting a North Korea nuclear agreement that falls far short of irreversible denuclearization, Republicans would not only be embracing a pragmatic North Korea policy, they would also be endorsing the idea that the United States should deal with hostile states as they are, and not as Washington wishes them to be—applying former Democratic US Defense Secretary William Perry’s dictum on North Korea. Waiting patiently for Pyongyang to give up its nuclear weapons program has turned a manageable problem into an urgent security threat. North Korea now has a tested nuclear capability and can fit a nuclear warhead onto a missile. If its nuclear weapons and ballistic missile testing programs continue, North Korea could acquire the capability to send a warhead across the Pacific and hit a target in the continental United States.

Republicans and Democrats likely agree with that sobering assessment. They may not appreciate its relevance to the equally sobering reality of a global order undergoing a profound and unpredictable transformation. America’s fundamental strategic position and choices have changed as a result—as dramatically as they did at the end of the Cold War. At that time, the threat of a hostile, nondemocratic power dominating any part of the globe vital to US interests had receded. American preeminence was certain. This time, while the United States remains the most powerful nation in the world, it confronts aspiring rivals willing to contest US interests and influence, international institutions under serious strain, and significant governance challenges at home that fragment the electorate, weaken national consensus and impose a requirement to revitalize American power from within.

Strengthening America’s strategic position and influence in this turbulent landscape requires addressing the direct challenges hostile states pose to the United States and its regional and global interests. Democrats took the first steps in that direction with the Iran nuclear accord but failed to seek Republican endorsement. An agreement that substantially reduces but does not eliminate the North Korean nuclear threat offers a fresh opportunity to secure bipartisan support for a pragmatic deal with North Korea, and for a broader shift towards engaging hostile states as they are, with the goal of addressing problems through dialogue, pressure and compromise. This paradigm shift would align US foreign policy with the overwhelming preference of American voters for diplomacy over confrontation. If US negotiations with North Korea move Republicans and Democrats to agree that a pragmatic deal with a hostile state makes the United States safer and stronger, that would be highly consequential for America’s global posture and prospects.