In an attempt to address the country’s electrical energy needs, the DPRK is placing greater emphasis on the construction and utilization of both hydroelectric and coal-powered, thermal-electric power plants. To date, most of that observed growth has been in the building of hydroelectric dams, principally in the northern provinces, where the terrain is more suitable for such projects.

North Korea has adopted a two-pronged approach to hydroelectric generation, splitting its efforts between the construction of large-scale, hydroelectric dams designed to light and power major urban areas, and small-to-medium-sized power stations, initially intended to support local needs, but which are now being called upon to support the greater national power grid. This trend was described in Part I of this series on North Korea’s hydroelectric power, which focused on the Chongchon River and the 12 Huichon power stations located along its length. Part II of this series takes a broader look at the northwest quadrant of the country, which includes the provinces of Chagang and North Pyongan, and focuses on the hydroelectric dams of the Jangja (Changja) and Taeryong Rivers.

The period of 2009-2010 serves as the primary historical imagery baseline for the study, as earlier coverage was not within the archives available. Specific construction periods for many of the dams discussed predates this baseline, and thus the trends discussed in this report are principally those observed on imagery covering the past decade. Further, discussions regarding certain facilities being tied into North Korea’s national power grid is based on a DPRK chart, translated into English, where specific plant locations are annotated on the grid. The chart also distinguishes between active and planned power plants, last updated in 2012.

The Taeryong River hydroelectric power station series is probably the most mature of the three major riverine systems in this quadrant of North Korea. There are four dams with associated power stations on the river, all constructed before 2004, save one, which was completed in 2006. It is also the shortest of the rivers discussed, and there is no evidence of new dam construction. The river’s system or series of dams is similar to the Chongchon River and Huichon Power Stations. The first dam, the Taechon Power Station Dam, is large in design, creating a sizeable reservoir behind it. A large substation/transformer yard is located 600 m to its south. Taechon Power Plant No. 1 was originally located at the base of the dam, but sometime prior to 2003, a decision was made to replace the station with another, Taechon Power Plant No. 2, whose generators reside inside an underground facility, with water flowing through tunnels to power its turbines. Adjacent to where the outflow can be observed is the substation/transformer yard. 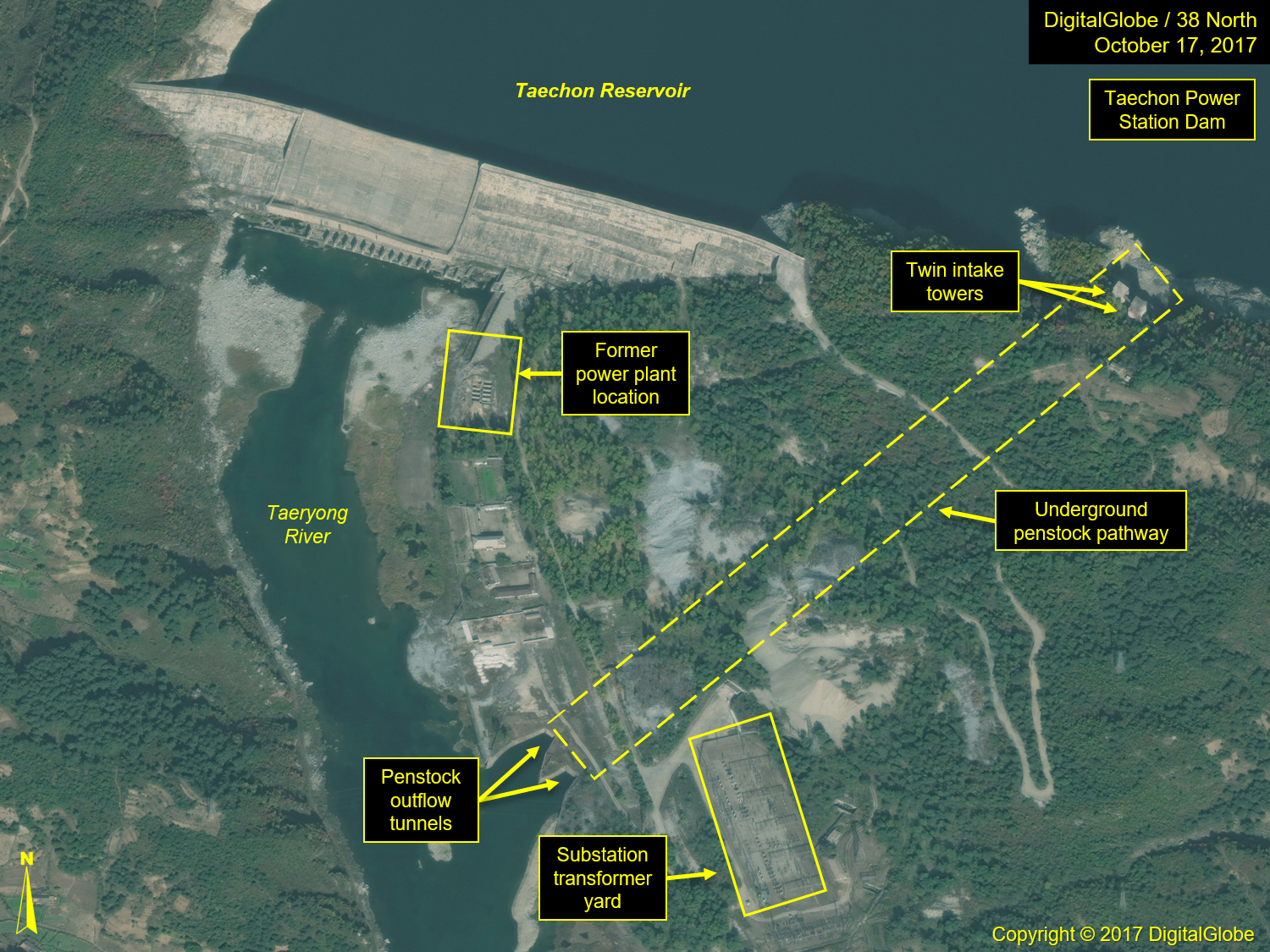 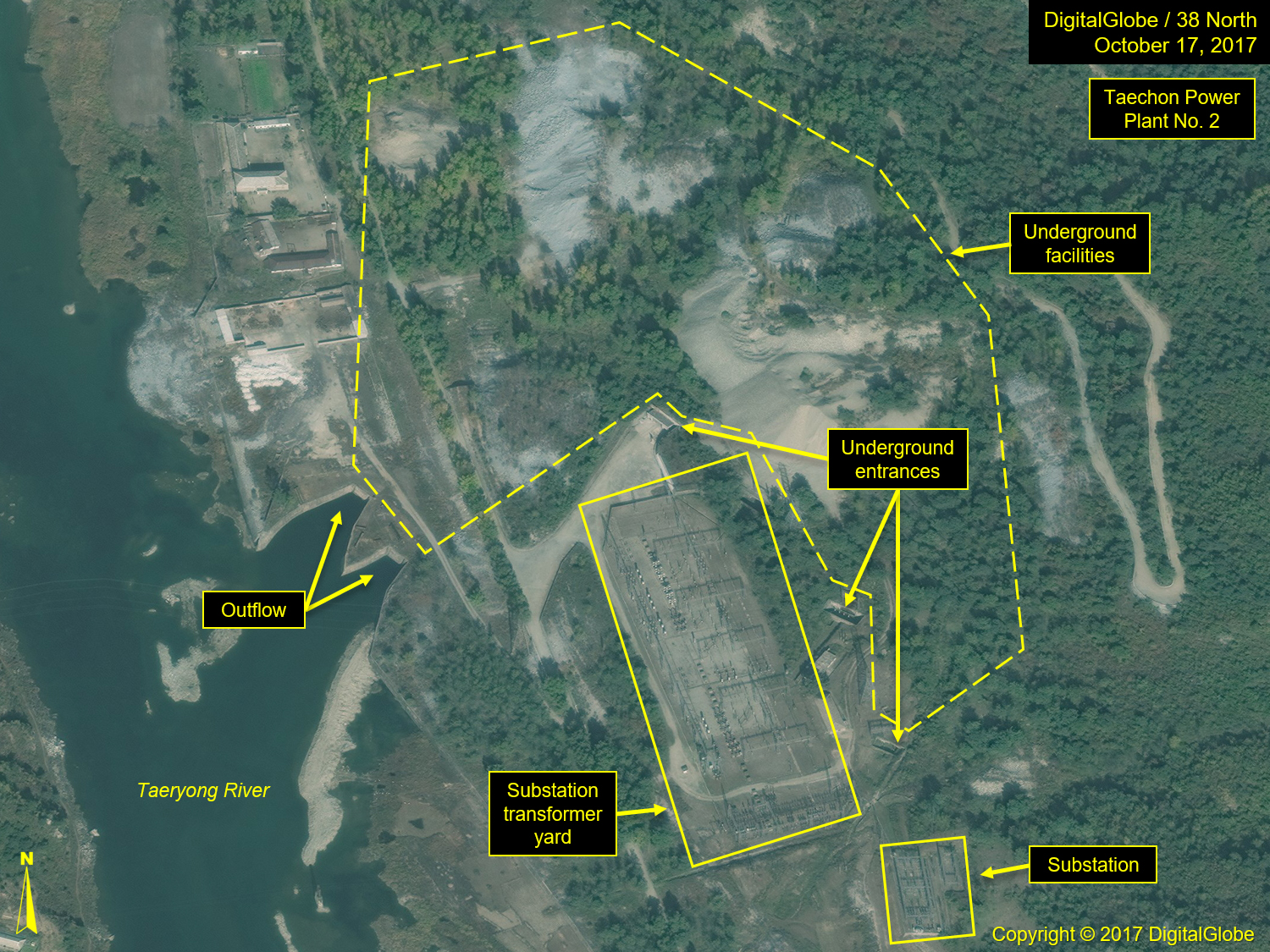 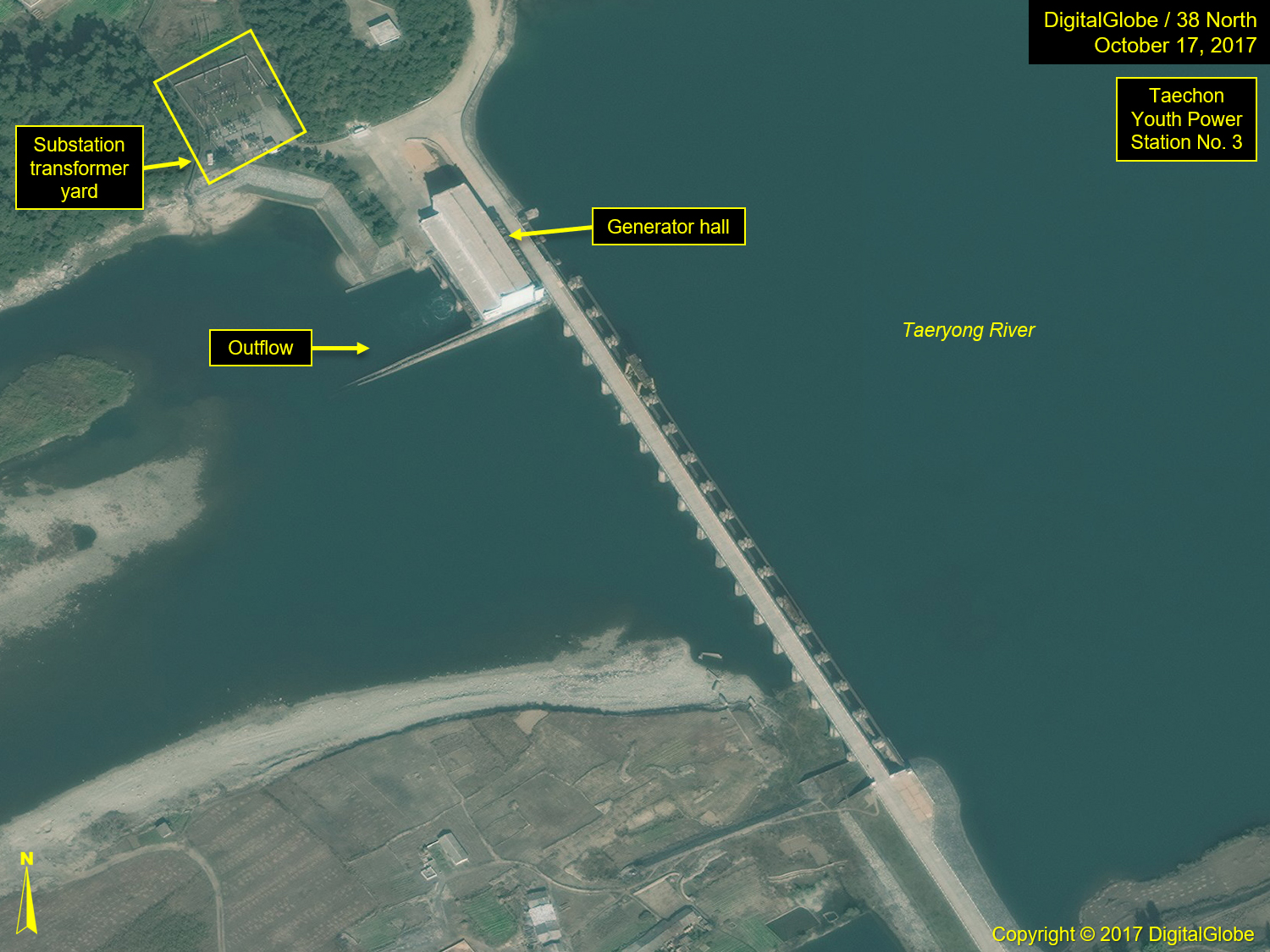 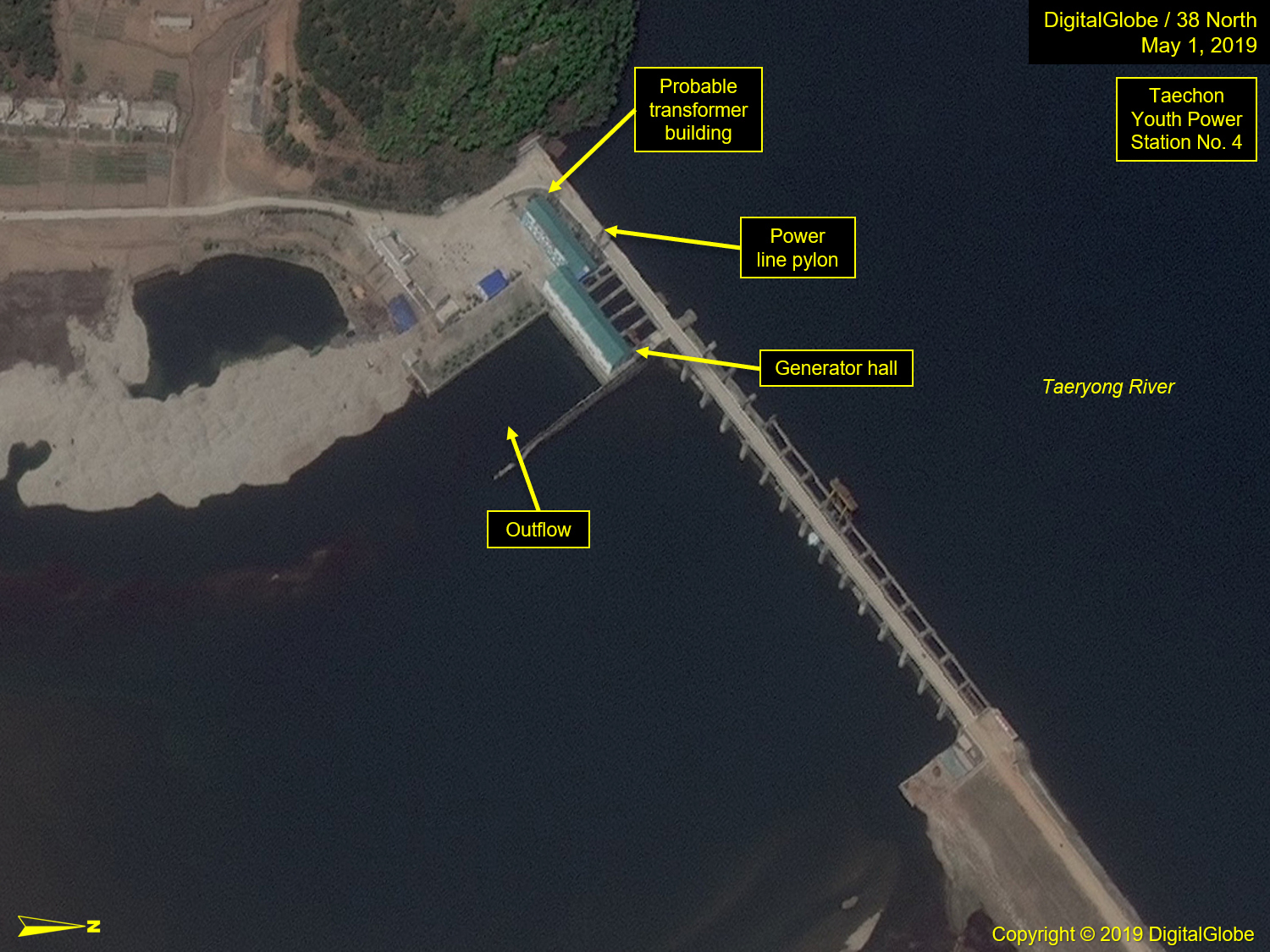 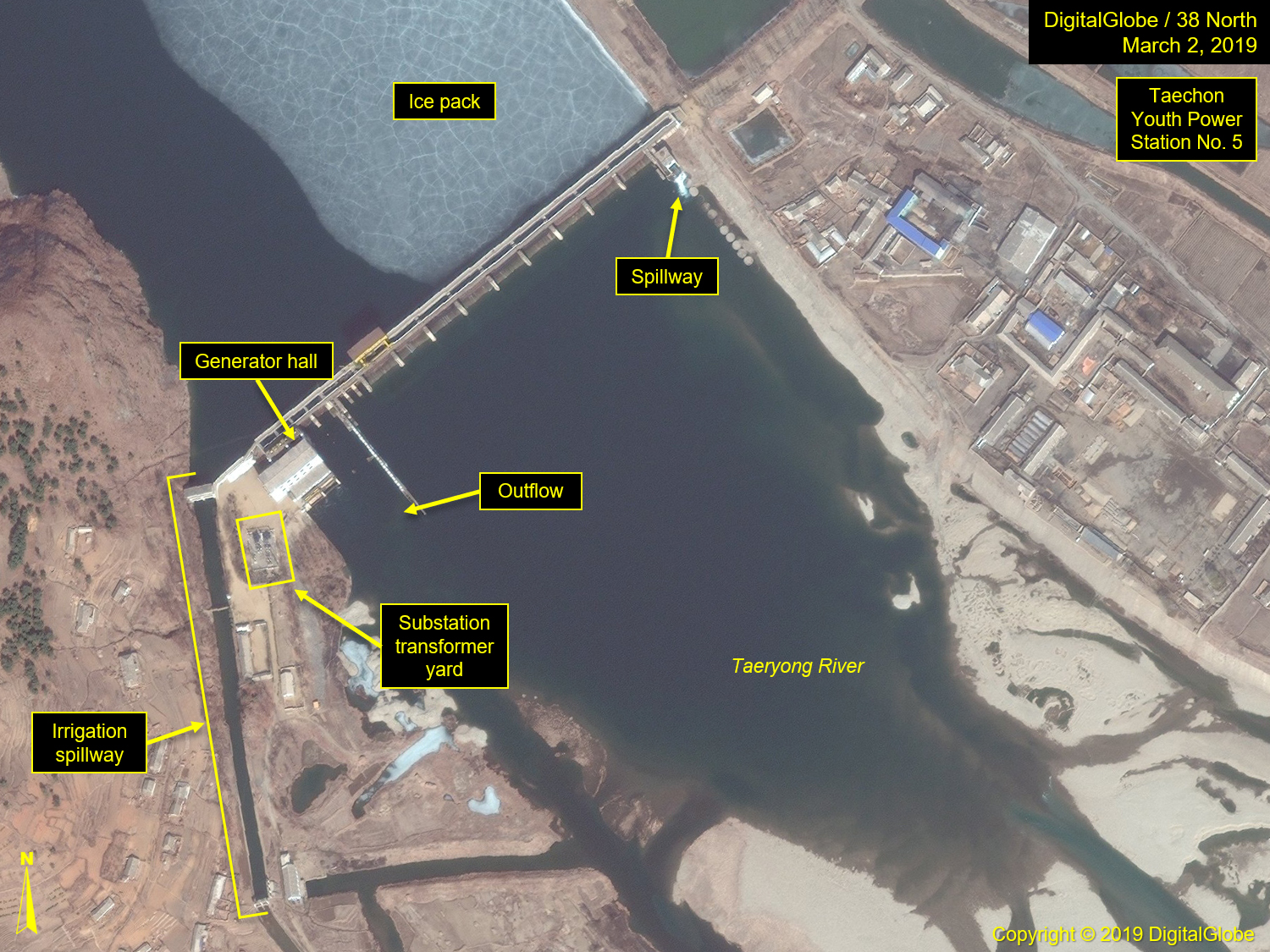 The pattern of the hydroelectric power stations along the Jangja River bears some resemblance to those along the Chongchon River. They are mostly small-to-medium-sized dams, each with an associated power station, the lone exception being the Jangjagang Power Station Dam, where both the reservoir and dam are significant in size. While most of these power stations and dams were constructed prior to 2009, two are more recent in construction, and one was still under construction as of February 2019.

The series of power stations begin upriver, near the city of Kanggye, where the Jangja and a large tributary join. A large, additional dam is located approximately 65 km farther to the east, near the town of Ryongrim, where the Ryongrim Reservoir and Dam are located. The dam itself has no associated power station located with it, however, the reservoir was created to support Huichon Power Station No. 1, located on Chongchon River. The water of the reservoir flows through underground penstocks, which tunnel through approximately 26 km of mountainous terrain. The diversion of water to the south and the severe drought North Korea has been experiencing has left the Jangja riverbed below the Ryongrim Dam in a relatively dry state. It is not until other tributaries begin to feed into the river farther downstream that the water flow begins to increase. However, the confluence of a large tributary meeting the Jangja southeast of Jonchon and another joining at Kanggye is what creates the volume of water needed to power the series of hydroelectric dams west of the city. The first of the dams, Hungju Youth Power Station No. 1, is located approximately 3.5 km to the north. (Note: 10 km south of Kanggye, there is ongoing grading occurring along the riverbank, which may be an indicator of early site preparations for another dam.)

Figure 7. Overview of Ryongrim Dam and Reservoir area, before and after completion. 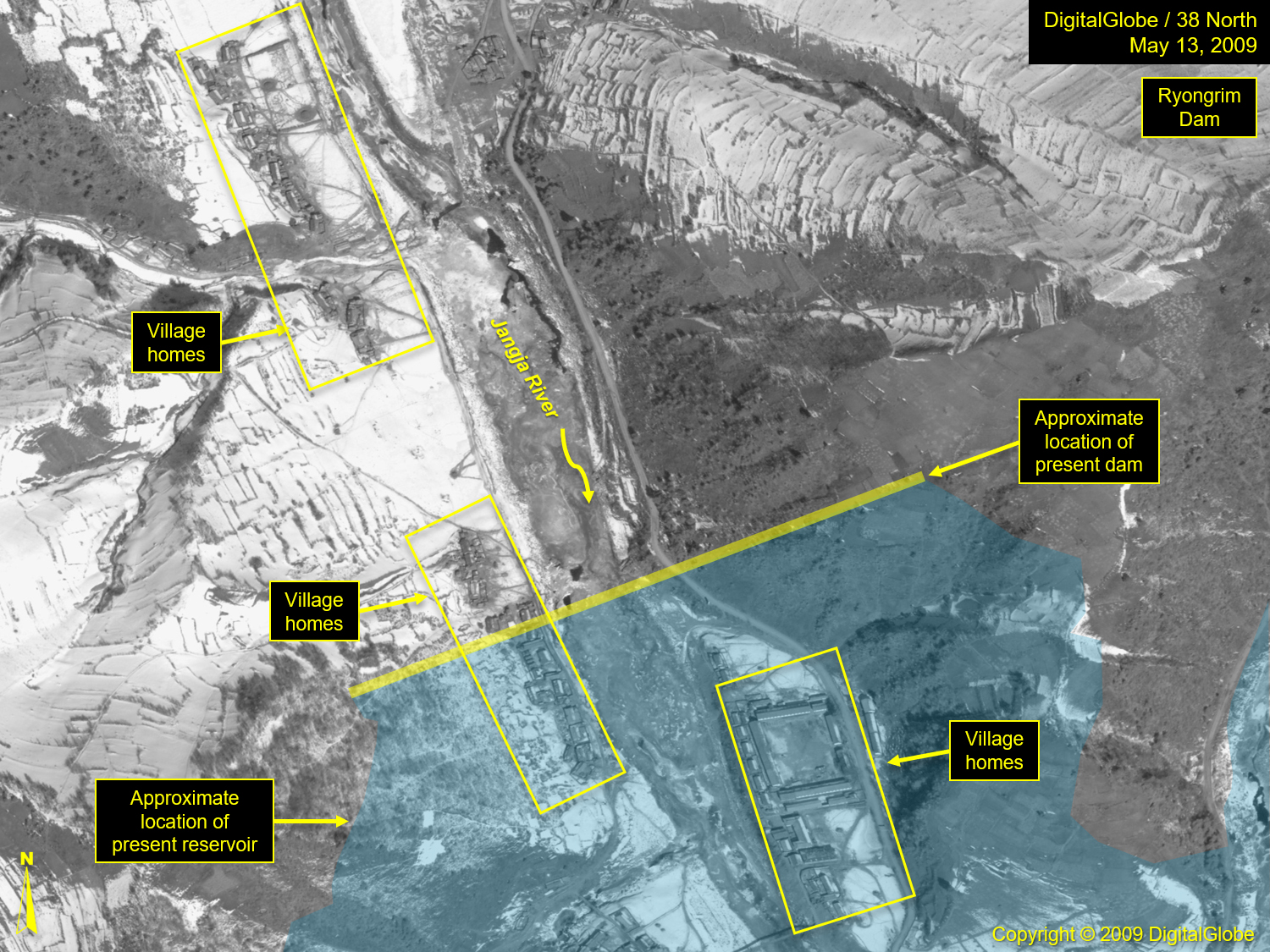 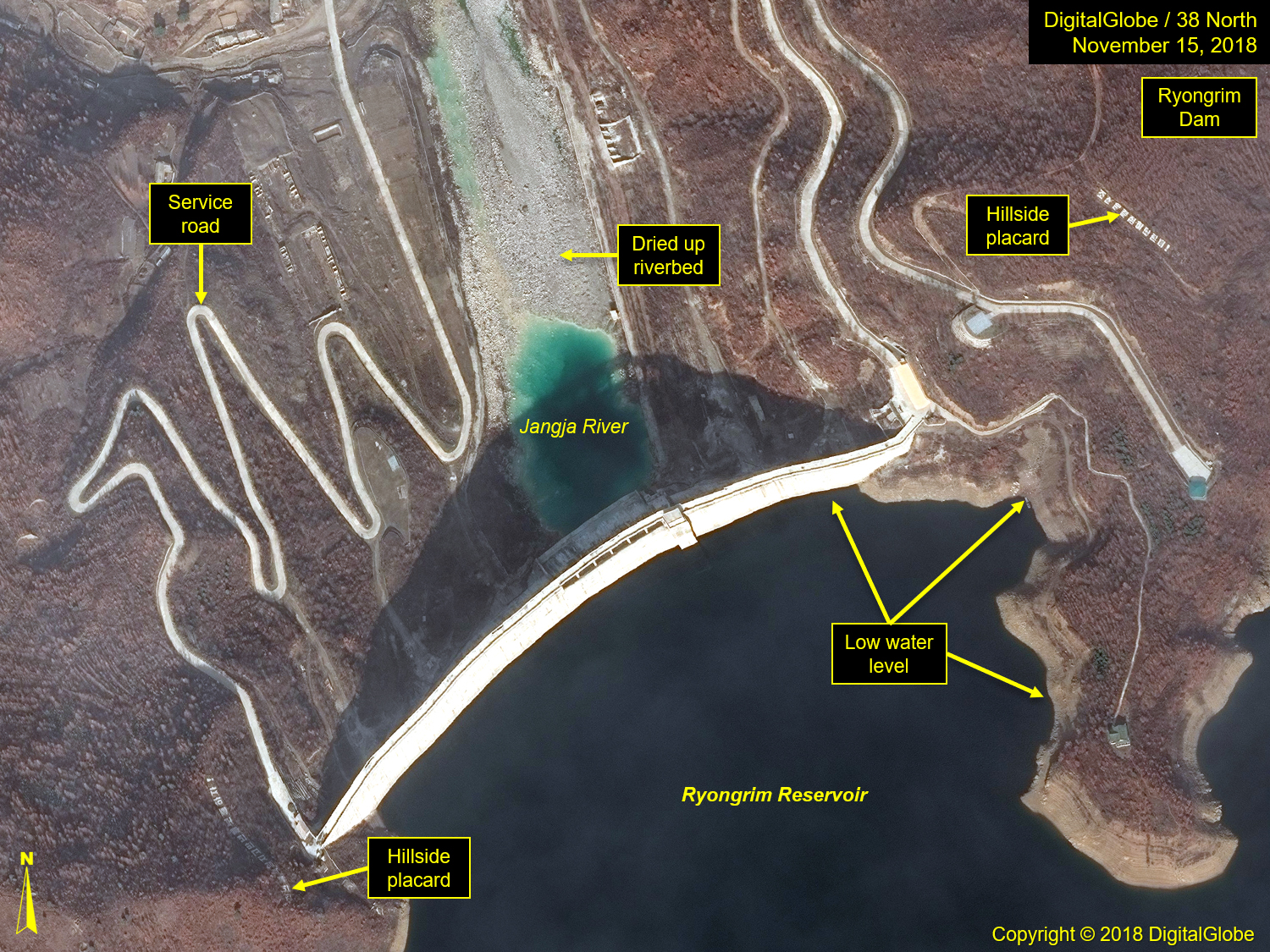 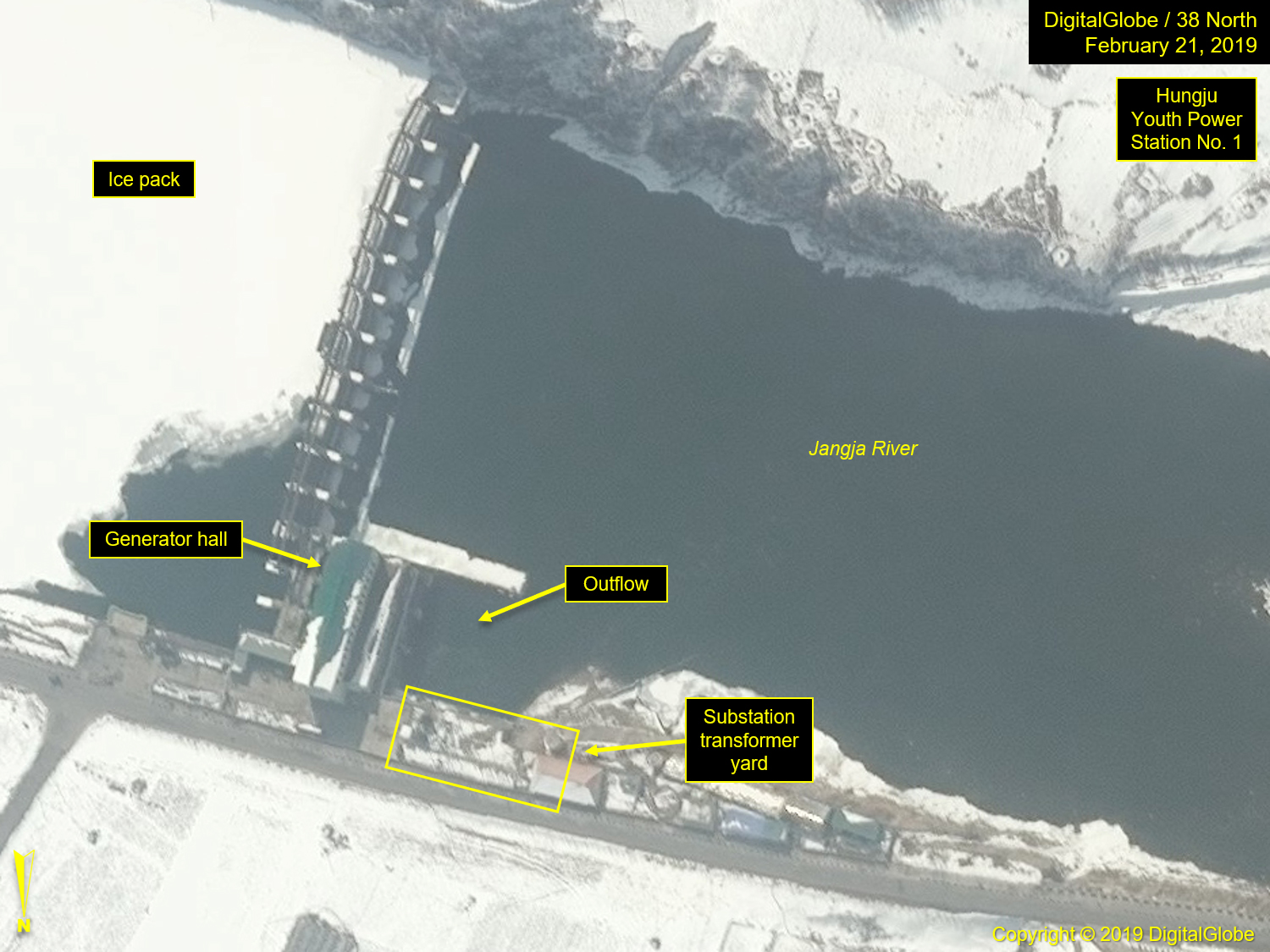 Moving southwest along the Jangja River, 3 km from Hungju Youth Power Station No. 1, is another hydroelectric dam under construction. The yet-to-be-named dam is located at 40.97926N, 126.5354E. Construction on its generator hall is ongoing, and three turbines are visible within its confines. While imagery coverage of the area is sparse, an image taken in 2013 revealed no signs of construction activity, but subsequent imagery taken in late 2017 and in early 2018 revealed that dam construction was well underway. By February 21, 2019, construction of the generator hall can be seen. 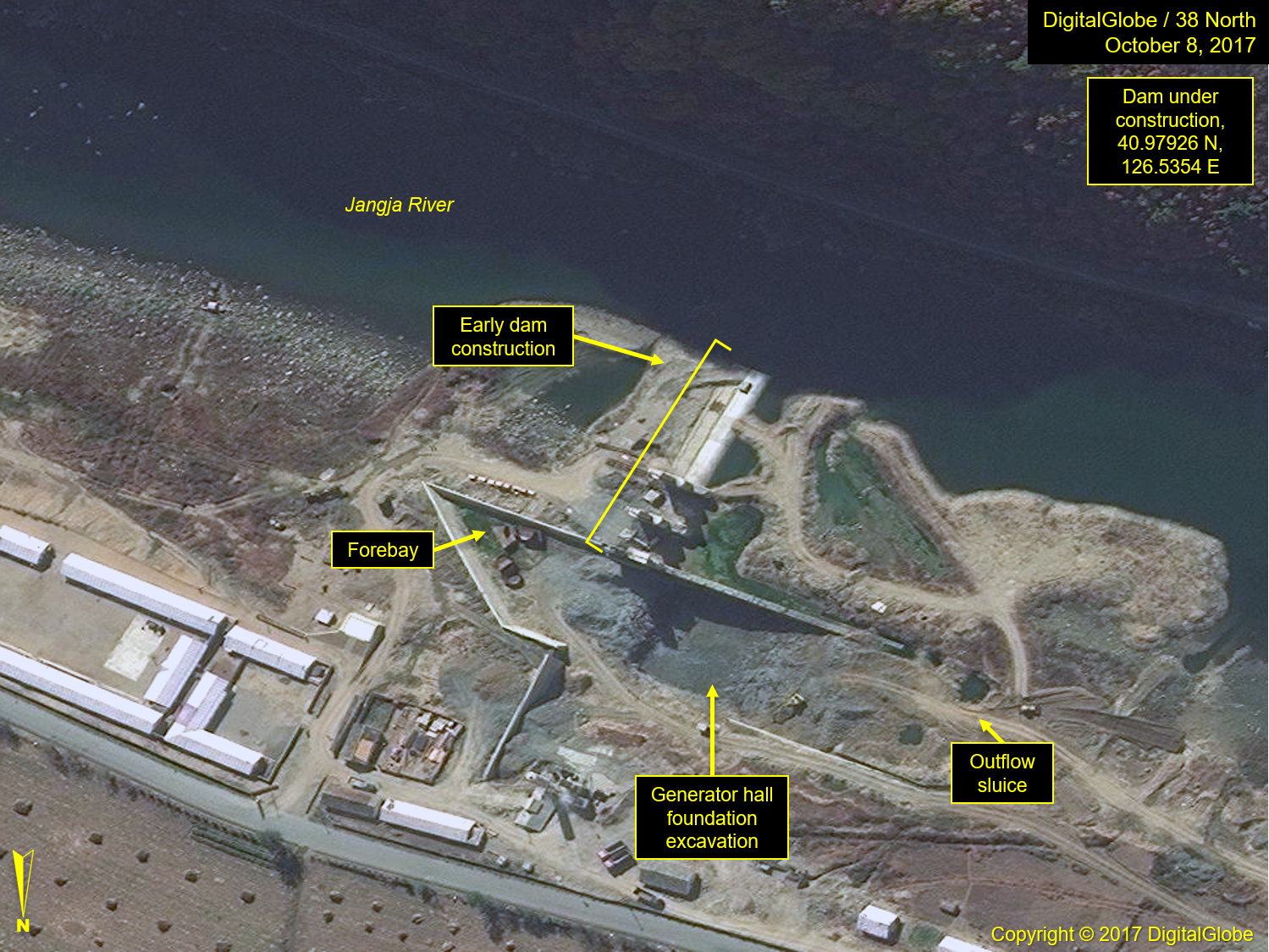 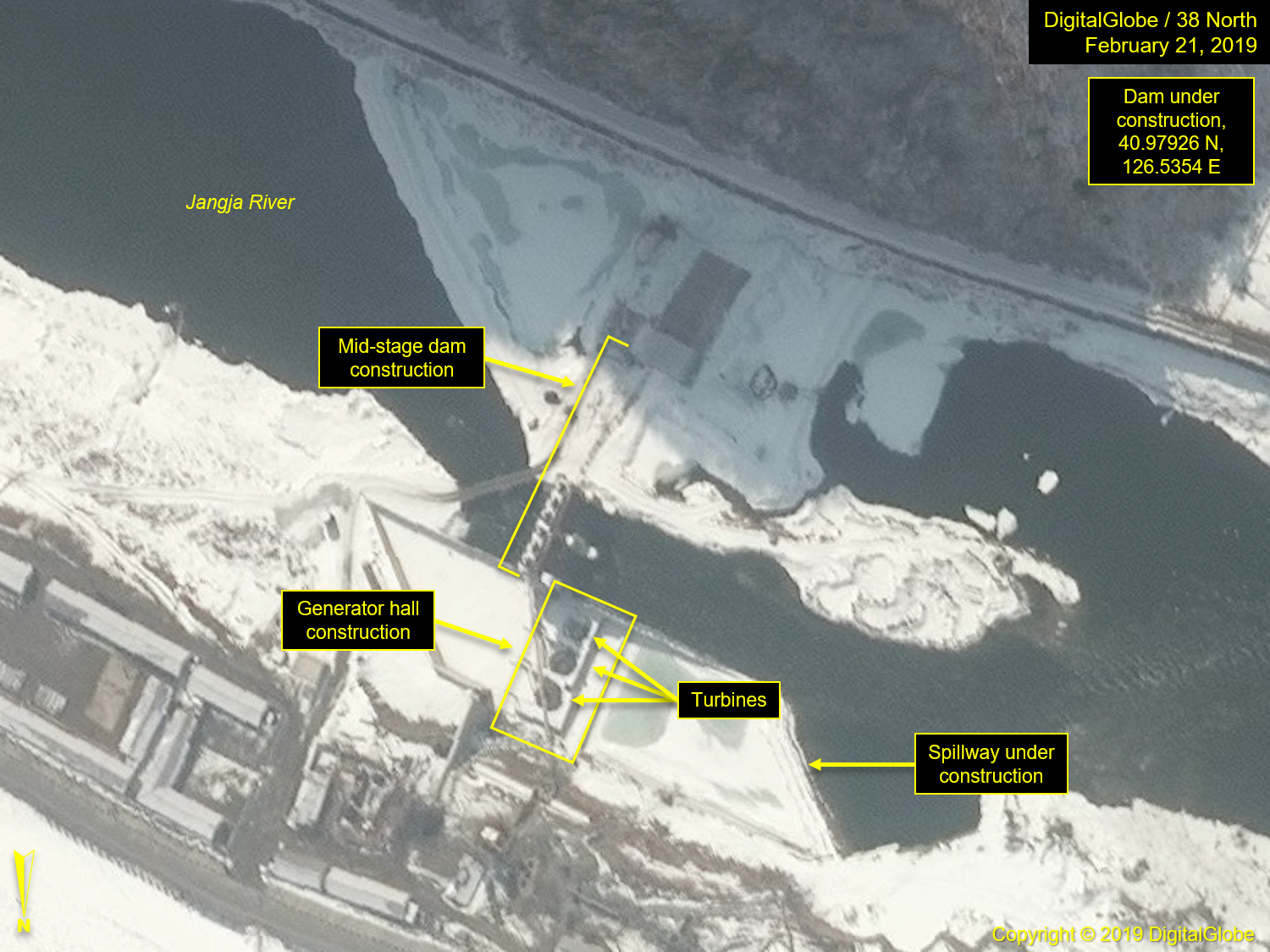 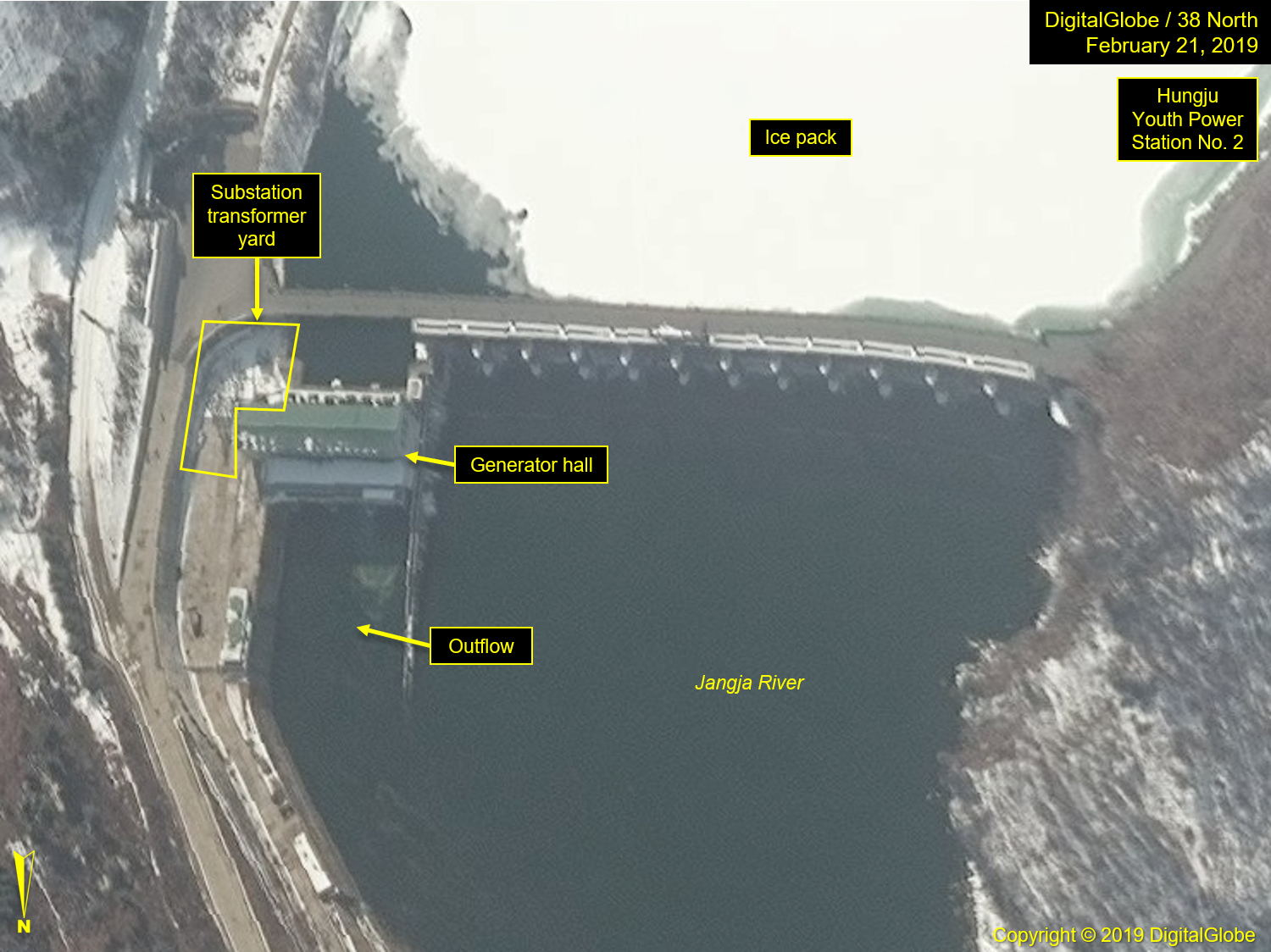 Figure 11. Hungju Youth Power Station No. 3 through the stages of construction.

Twenty-five km west of Hungju Youth Power Station No. 3 is the large Jangjagang Power Station Reservoir. The dam itself is located at the western end of the reservoir. It is a large concrete structure, built at a time when the DPRK favored the construction of large power stations, such as those found at Huichon and Taechon. The dam itself has no readily identifiable generator hall, so it is likely that the generator turbines are located underground on the north side of the dam. There is one large building, located at the dam’s base, which appears to be derelict, lacking a roof. An early image of the building, taken in 2003, shows a 60 percent roof covering, which has since fallen away. The building’s location and size suggest it may have been the original generator hall for the dam, but like the power plant at the Taechon Power Station Dam, it was discarded in favor of a more protected, underground facility. Suggesting the location of such a facility, an outflow of water can be seen emanating from a tunnel entrance at the river’s edge of the north bank, just below the dam, and located on the hillside above the outlet is a substation/transformer yard. 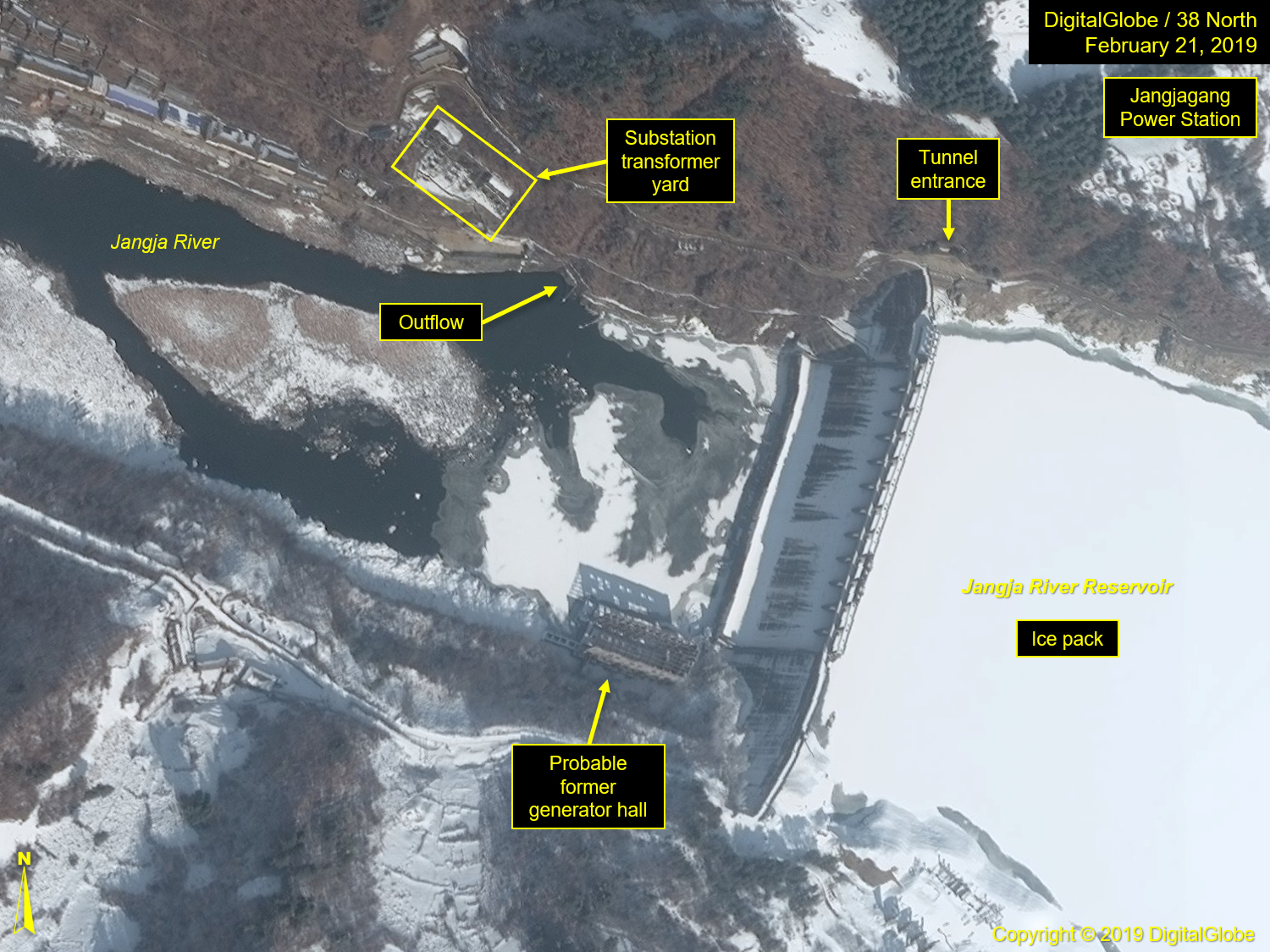 Less than 5 km downstream from the reservoir is the final hydroelectric power station on the river, the Yonha Power Station and dam. Small in size, it was observed under construction in 2003 and was completed sometime between then and 2007, the time of the next available image. 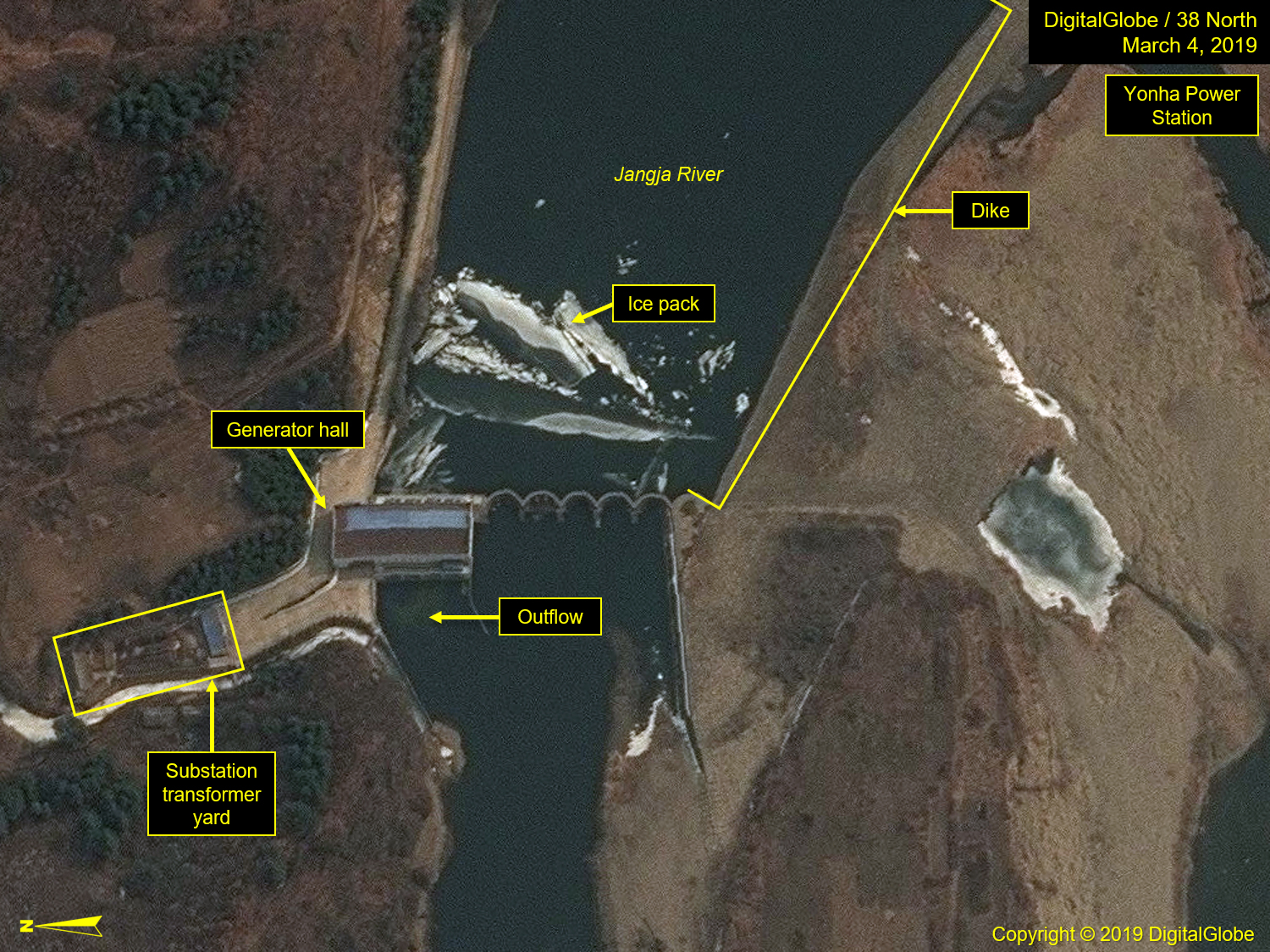 The DRPK is clearly working toward solving its electrical energy needs, and hydroelectric power generation continues to expand, principally with the emphasis on building small-to-medium-sized hydroelectric dams. The first two parts of this study have reviewed three major riverine systems in the northwest providences. The Taeryong is the most mature. All of its hydroelectric dams were completed over a decade ago, and it appears the river is at its capacity in terms of their numbers. The Chongchon holds the most power stations, boasting 12, more than half of which have been constructed in the last 5 years, significantly adding to the country’s electrical energy capacity. Yet another medium-sized dam is under construction just south of the last of the tiered dams, 4.5 km northwest of Kaechon. Adding another beyond this point along the river is not likely, as the terrain to the south is not favorable for the construction of hydroelectric dams. The Jangja offers the most opportunity for growth. While many of its power stations were constructed during the same period of those built on the Taeryong River, evidence of new construction is emerging, suggesting that there is yet room for growth.