Corrections have been made to Figure 4, which mislabeled the floating crane on the side of the secure boat basin as the submersible test barge. Although difficult to determine conclusively, the submersible test barge appears to be berthed under the awning. Additionally, discussion by Dave Schmerler provided clarification about what is likely a truck crane parked on the quay. Article updated 10.02.19.

Recent commercial satellite imagery of North Korea’s Sinpo South Shipyard from August 26 and September 23 indicates that construction continues on a new ballistic missile submarine (SSB). Previous reports have suggested that the submarine is nearing completion, given the recent construction of a retractable awning that could be intended to conceal the new boat. That may prove to be true, however, the awning may also be intended to improve concealment of activity related to the existing SINPO-class submarine or any vessel and, therefore, is not a reliable indicator of the imminent launch of a new boat.

The presence of a cylindrical canister and support vehicles near the submersible test barge berthed at the secure boat basin strongly indicates that preparations are underway for the testing of a dummy round from its missile launch ejection system. This test is routinely done prior to actual missile launches, to ensure that the missile can be ejected at the proper speed and angle before committing to ejection and launch from the submarine.

There is still uncertainty about the type of submarine actually under construction at Sinpo. Photos released with reports of Kim Jong Un’s visit to the Sinpo South Shipyard on July 23 suggest that the submarine inspected by Kim was a modified ROMEO-class design,[1] not the SINPO-C class ballistic missile submarine widely believed to be under construction.

The size of the construction hall could support building an additional submarine although there is no evidence to suggest that activity is underway. This does raise several possibilities, however. Pyongyang may have decided not to move forward with building the SINPO-C class submarine. Or it may have started building the SINPO-C, but ran into problems and focused on a modified ROMEO-class submarine instead in order to be able to show progress in submarine development. A final possibility is that it may be building both the ROMEO and SINPO-C class submarines simultaneously. Regardless, North Korea appears to be working to establish a credible submarine-launched ballistic missile (SLBM) capability.

The movement of parts and equipment to and from the parts yard adjacent to the construction hall indicates construction on the new ballistic missile submarine has continued since Kim Jong Un’s reported visit. While this doesn’t negate assertions that the North may be launching the submarine soon, the retractable awning in the secure boat basin can conceal any additional work that may be done to fit out the boat once it is in the water, helping to maintain ambiguity.

Figure 2. Movement of parts and equipment observed at the parts yard adjacent to the construction halls.

Imagery from August 26 shows the presence of four vessels berthed at the secure boat basin: the submersible barge used for underwater launch testing, a support vessel, a 17.5-meter-long midget submarine and the SINPO-class experimental ballistic missile submarine (SSBA). Personnel and objects are observed on the quay near both the submarine and the barge along with a crane and a 10.35 m x 1.75 m cylindrical canister on a truck with two support vehicles on both sides. 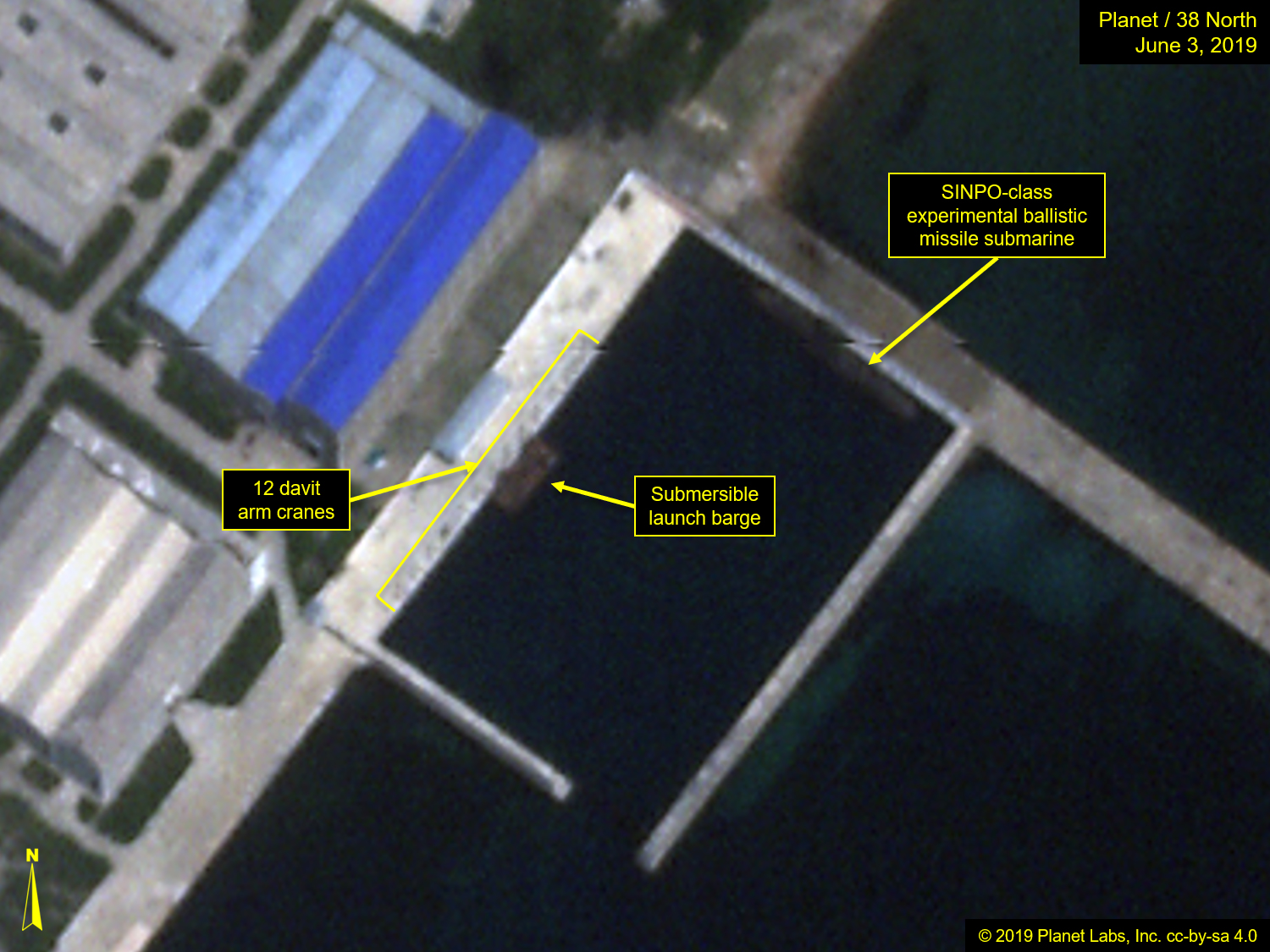 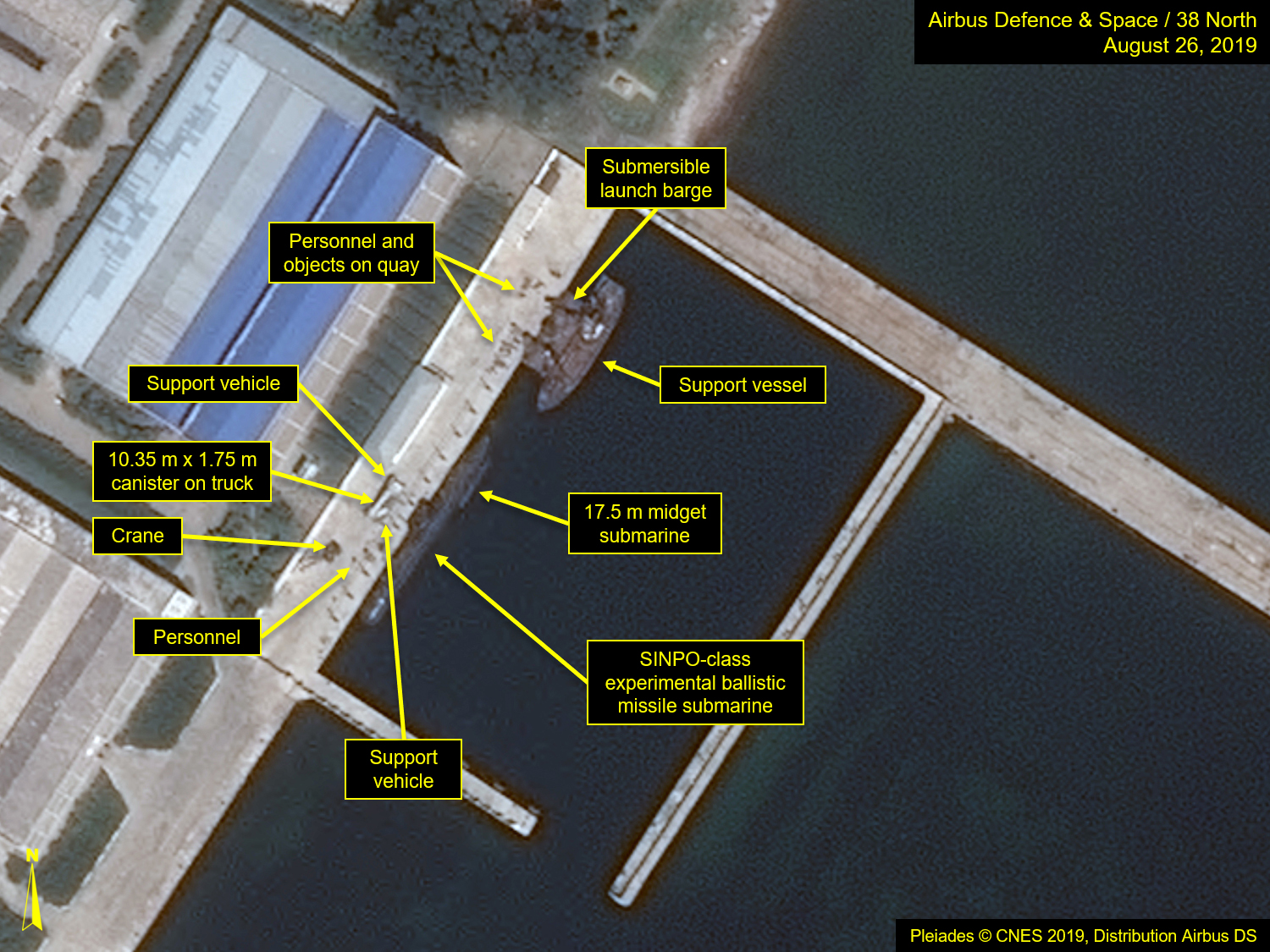 In imagery from September 23, the cylindrical canister and associated support equipment now appear on the submersible test barge along with support vessels. The canister transport truck and crane are still on the quay. These activities suggest that preparations for a pop-up ejection test are likely underway. The retractable awning conceals a submarine berthed at the secure boat basin, although the bow marking suggests it is still the SINPO-class experimental ballistic missile submarine.

The use of an integrated missile-launch canister would be a significant improvement over that of a launch tube fixed to the submarine, as is the case with the SINPO-class SSBA, where the bare missile had to be carefully inserted into the tube. Safety, reliability and reload speed are the primary benefits.

Careful photographic analysis by H.I. Sutton concludes the “new” submarine Kim Jong Un inspected in July is a modification of the decades-old Soviet ROMEO-class conventional submarine. The North Koreans appear to have removed the aft battery compartment to make room for the missile tubes and extended the length, width and height of the sail. Three missiles are the most this configuration can accommodate. It is unclear whether the new SSB is a conversion of one of the remaining active ROMEOs or a refurbishment of a previously inactive hull. (The DPRK is known to have up to 20 ROMEO-class submarines in service.)

There are a few reasons why getting a modified ROMEO operational would enhance North Korea’s naval capabilities, including: