The international community has long suspected that North Korea has uranium enrichment facilities in addition to the one declared at the Yongbyon Nuclear Scientific Research Center. Some reports even suggest the presence of underground complexes there allegedly housing such enrichment facilities.

Two previously unidentified underground complexes have now been identified at Yongbyon based on the presence of tunnel entrances and visible spoil piles, which have become far less obvious with time. While it is impossible to remotely discern their purposes, their location within Yongbyon’s security perimeter and subsequent camouflaging qualify them as subjects of interest for future inspection teams.

Underground facilities at Yongbyon have been the subject of speculation for some time. For example, in 2013, reports quoted a North Korean defector who claimed there were underground complexes at Yaksan Dongdae and Mt. Sotaek. The defector did not describe the underground facilities as being for uranium enrichment, but rather for the hiding of “materials and laboratory testing equipment and important systems” when under the threat of an upcoming International Atomic Energy Agency (IAEA) inspection. Although the defector is credited with providing information used to create two different maps (Figure 1), it is difficult to locate any tunnel entrance at the specified locations.

A more recent report in the JoongAng Ilbo claimed that there was a clandestine underground uranium enrichment plant at Bungang, which they described as being northeast of the Yongbyon complex. However, the map published in that article incongruously highlighted an area northwest of Yongbyon and its associated town center (Figure 3), and a search of this area did not reveal any evidence of an underground facility in that vicinity.

Signatures of at least two underground complexes, located east and southeast of Yongbyon across the Kuryong River, can be identified.

There is one substantial tunnel complex directly across the river from the 5 MWe Reactor that dates back to at least April 1, 2002 (the date of the oldest imagery available on Google Earth), as indicated by the presence of excavated spoil piles going back at least that far.[1] The complex is likely accessible by, and integrated with, the road tunnel that links the reactor area at Yongbyon with the Radiochemical Laboratory and the Uranium Enrichment Plant (Figure 4). 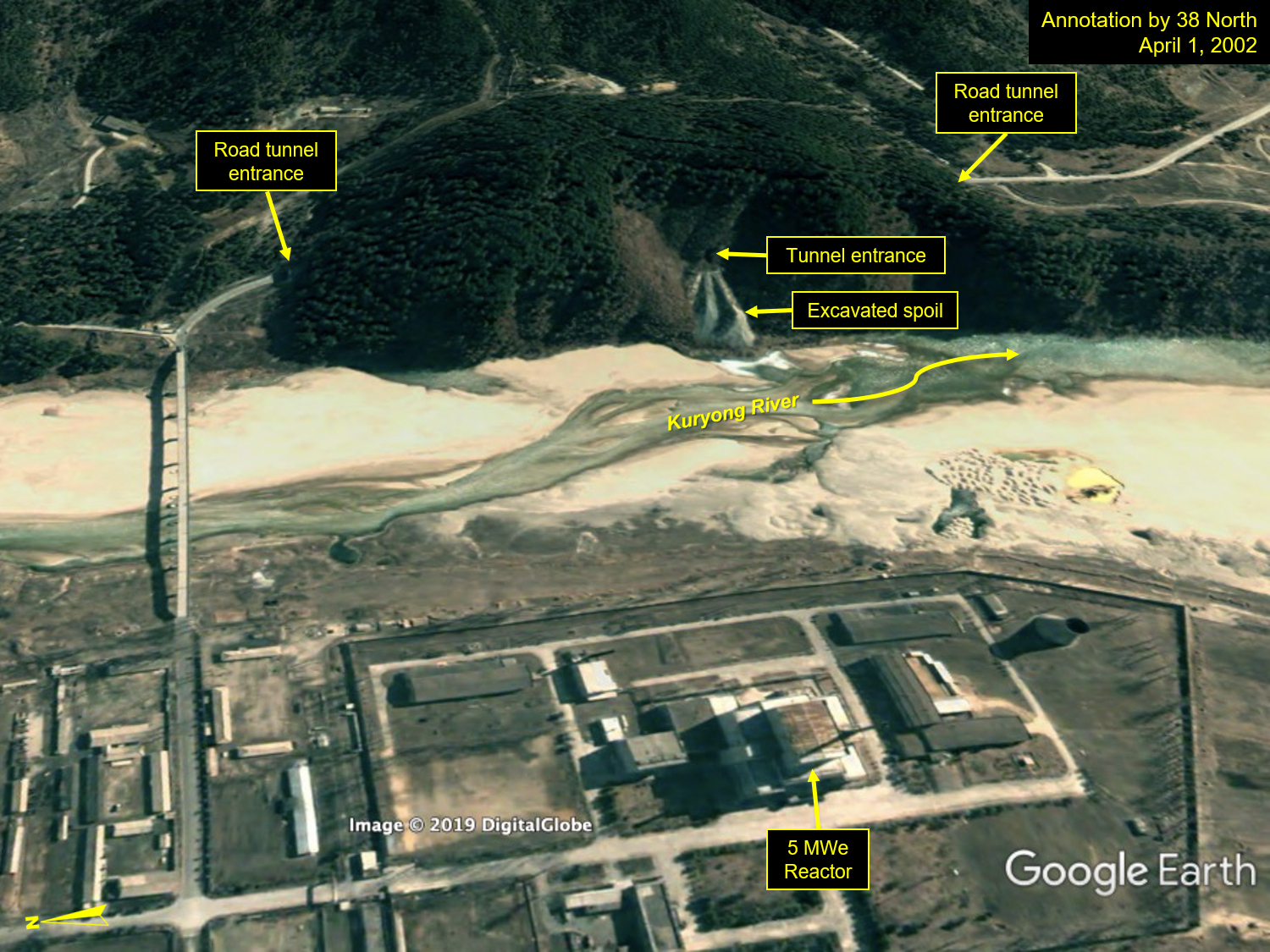 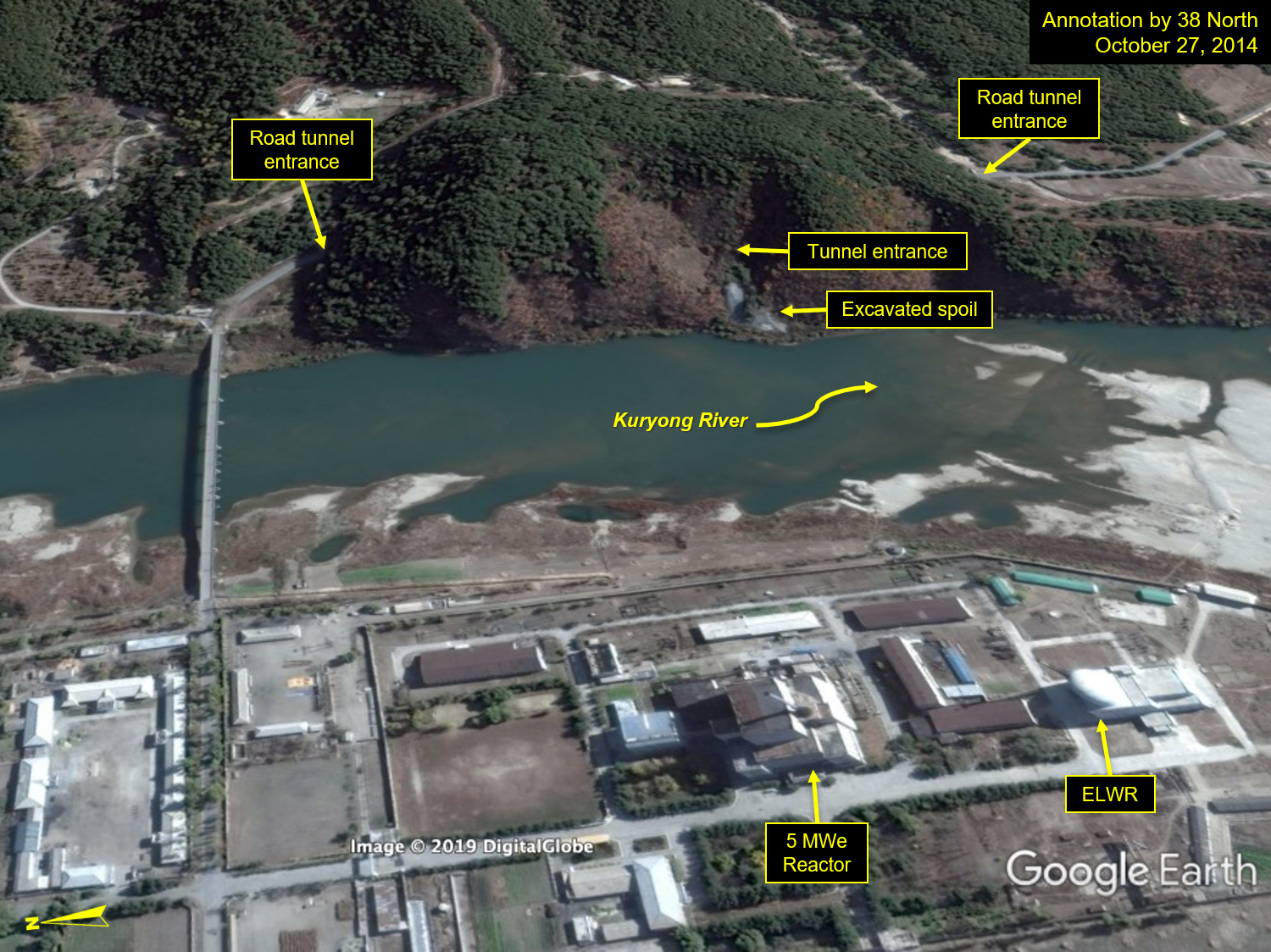 A second smaller tunnel was excavated sometime between April 2005 and April 2006 under a hillside along the Kuryong River, northeast of the abandoned 50 MWe reactor area, just inside the security perimeter near Yaksan, a location specified in the defector report. By 2010, two additional tunnels were excavated into the same hillside,[2] and all three tunnel entrances were connected by a service road. At least one utility or powerline also appeared to connect with the third tunnel entrance indicating some kind of equipment utilizing electric power could be located inside that tunnel. (Figure 5) Moreover, between 2013 and 2019, this second identified underground complex had been completely camouflaged with vegetation. (Figure 6) 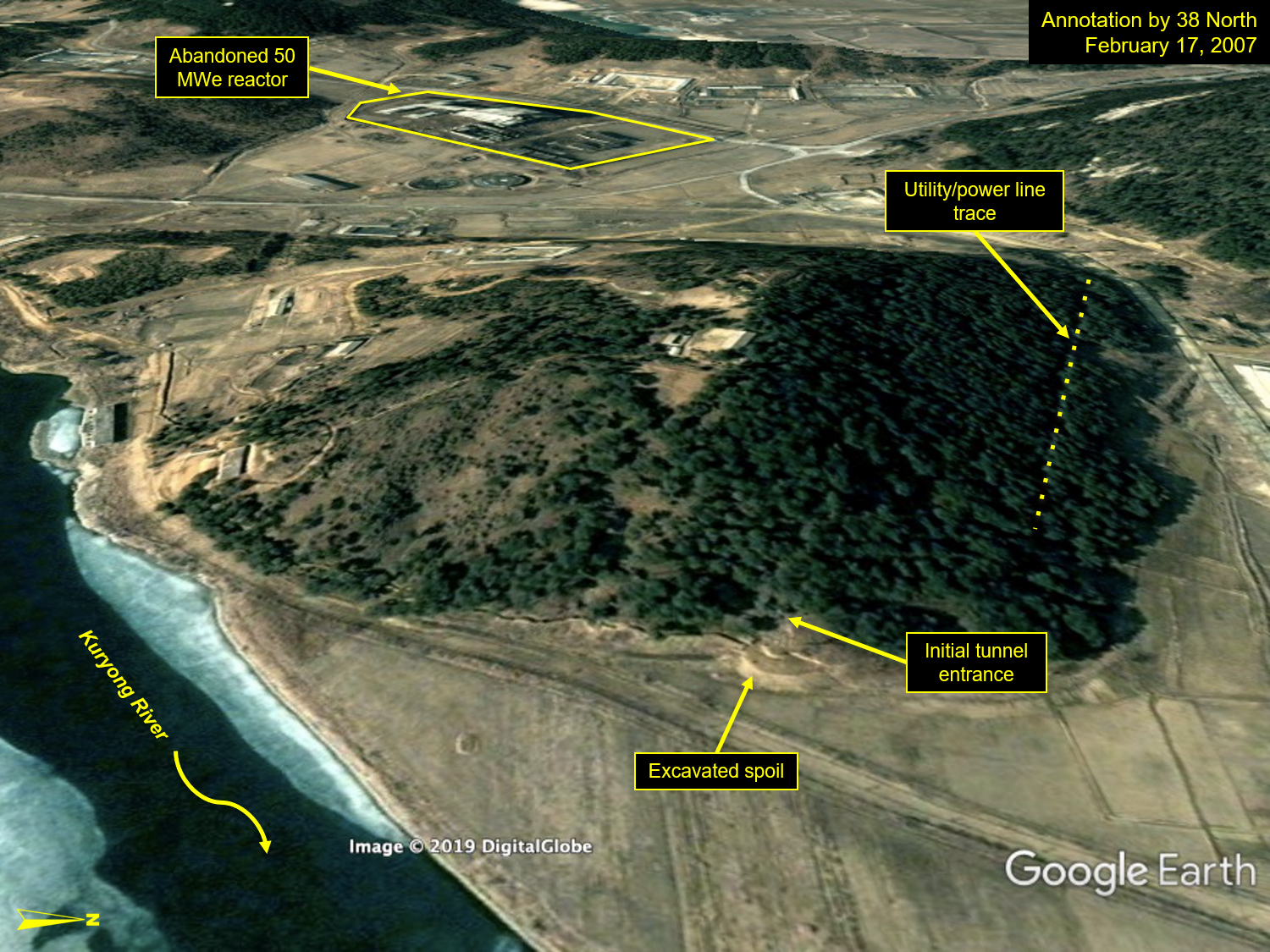 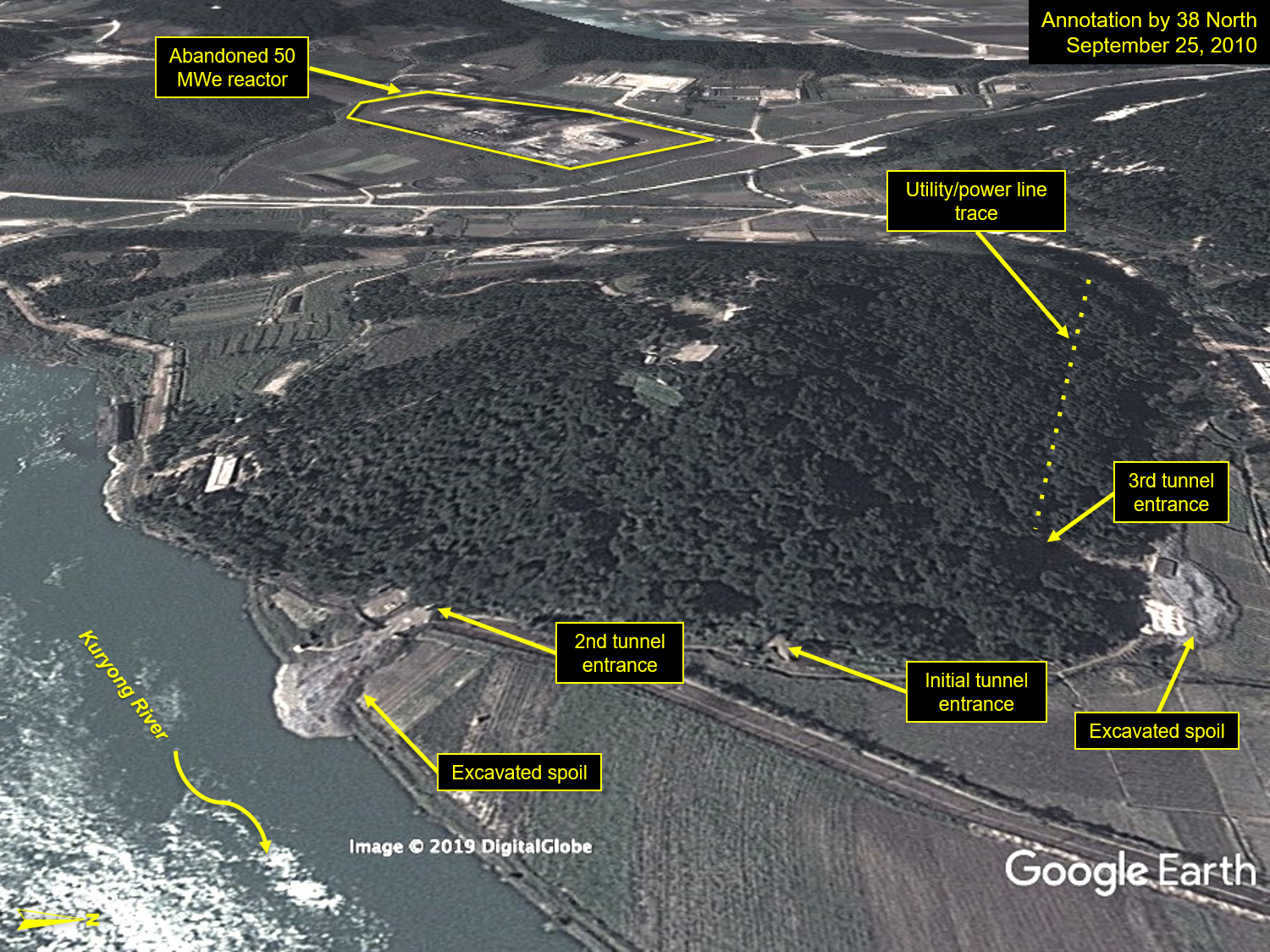 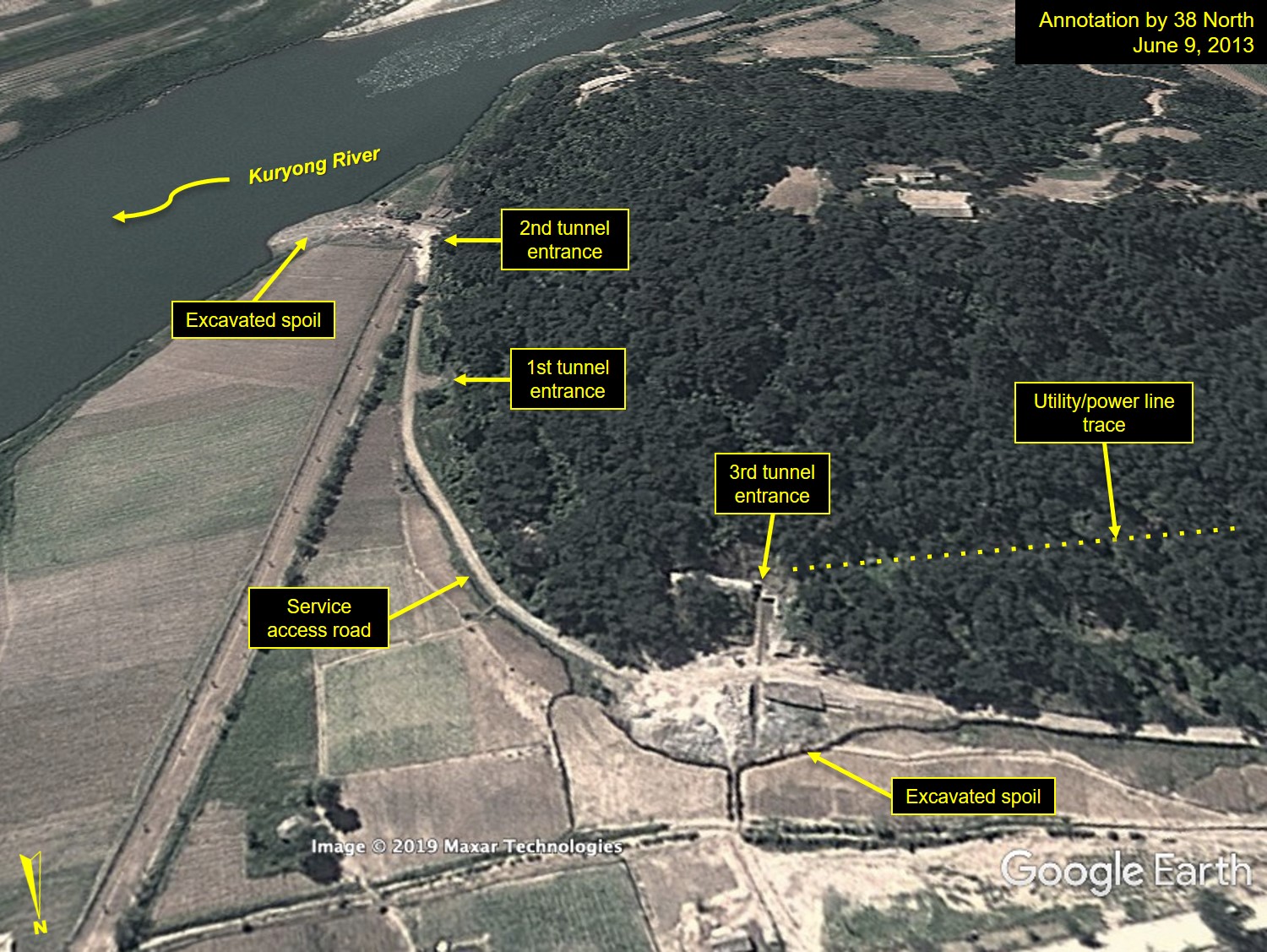 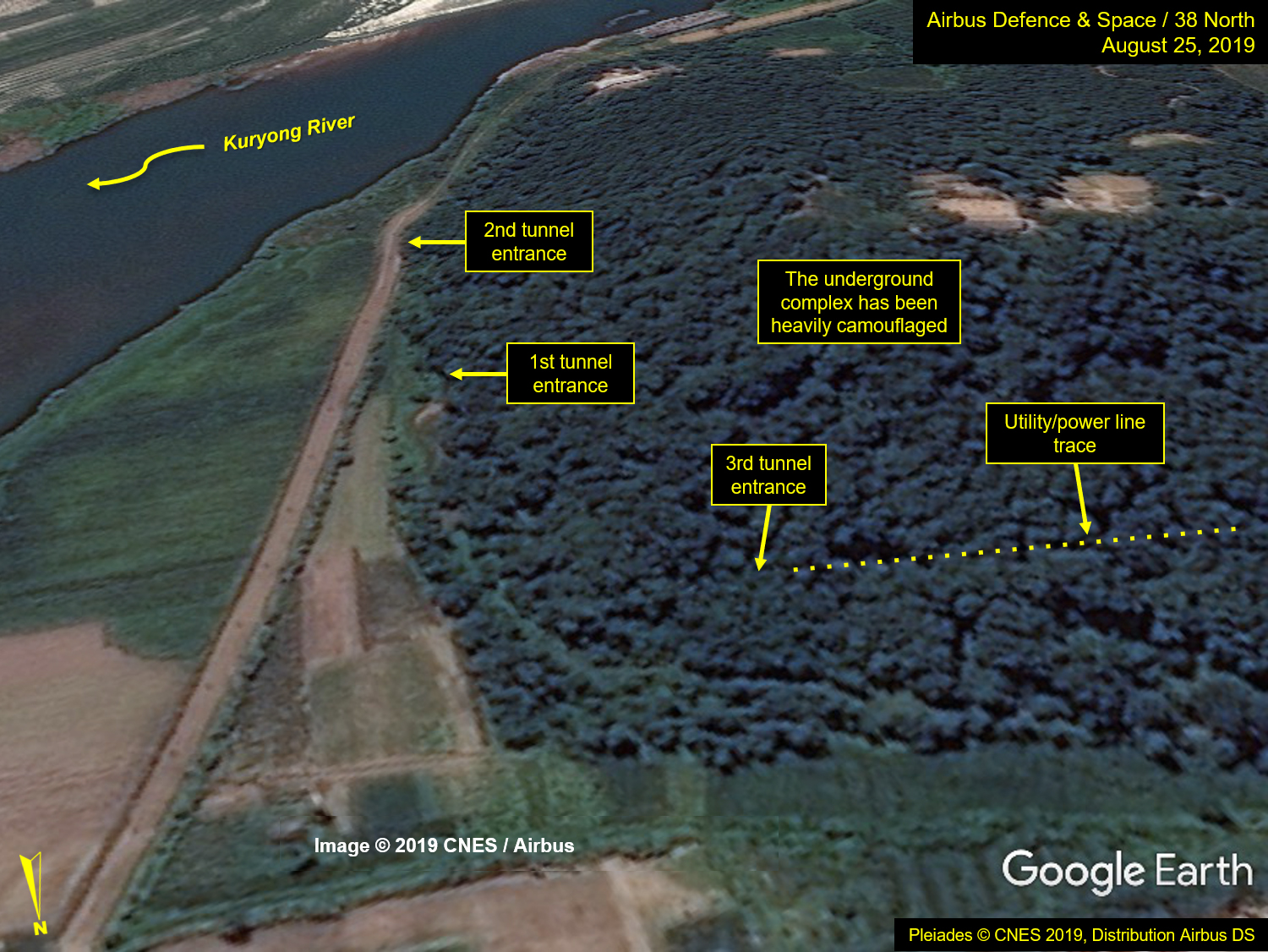