At first glance, North Korea’s mountainous terrain and numerous riverine systems would seem ideal for hydroelectric power production, and it was the vision of Kim Il Sung and Kim Jong Il which drove the country to undertake the construction of large-scale hydroelectric power station dams. The Huichon Power Stations No. 1 and 2 were intended to be the crown jewel of that effort. Kim Jong Un initially embraced that strategy, but as poor engineering and extreme weather patterns caused continued setbacks, the country shifted efforts to build more easily constructed and reliable, small-to-medium-sized power plants, built in tiers (in series), to help close the electrical energy gap.

The exemplar of this trend was described in Part I of this series on North Korea’s hydroelectric power system. That report focused on the Chongchon River and the 12 Huichon power stations located along its length. Huichon Power Stations No. 1 and 2 represent the large hydroelectric stations, each supported by their own reservoir to supply the necessary water volume to power their turbine generators. The more efficient, small-to-medium-sized hydroelectric plants are represented by the tiered spacing of Huichon Power Stations No. 3 to 12.

A third strategy for generating hydroelectric power can be found in the northeastern province of South Hamgyong, where Hochongang Power Stations No. 1 to 4 are located. These power stations are nontraditional, in that the water supply that drives their turbines does not come from an adjacent river or dam, but is received through a complex series of pipes and tunnels drawing water from distant reservoirs. Each of these power stations have large substations co-located with them. How successful the Hochongang power plants have been is not known, but the new, highly touted Tanchon Power Station project is incorporating major tunnel waterways into its design.

Figure 1. Overview of the region around the Tanchon Power Stations, July 31, 2018. 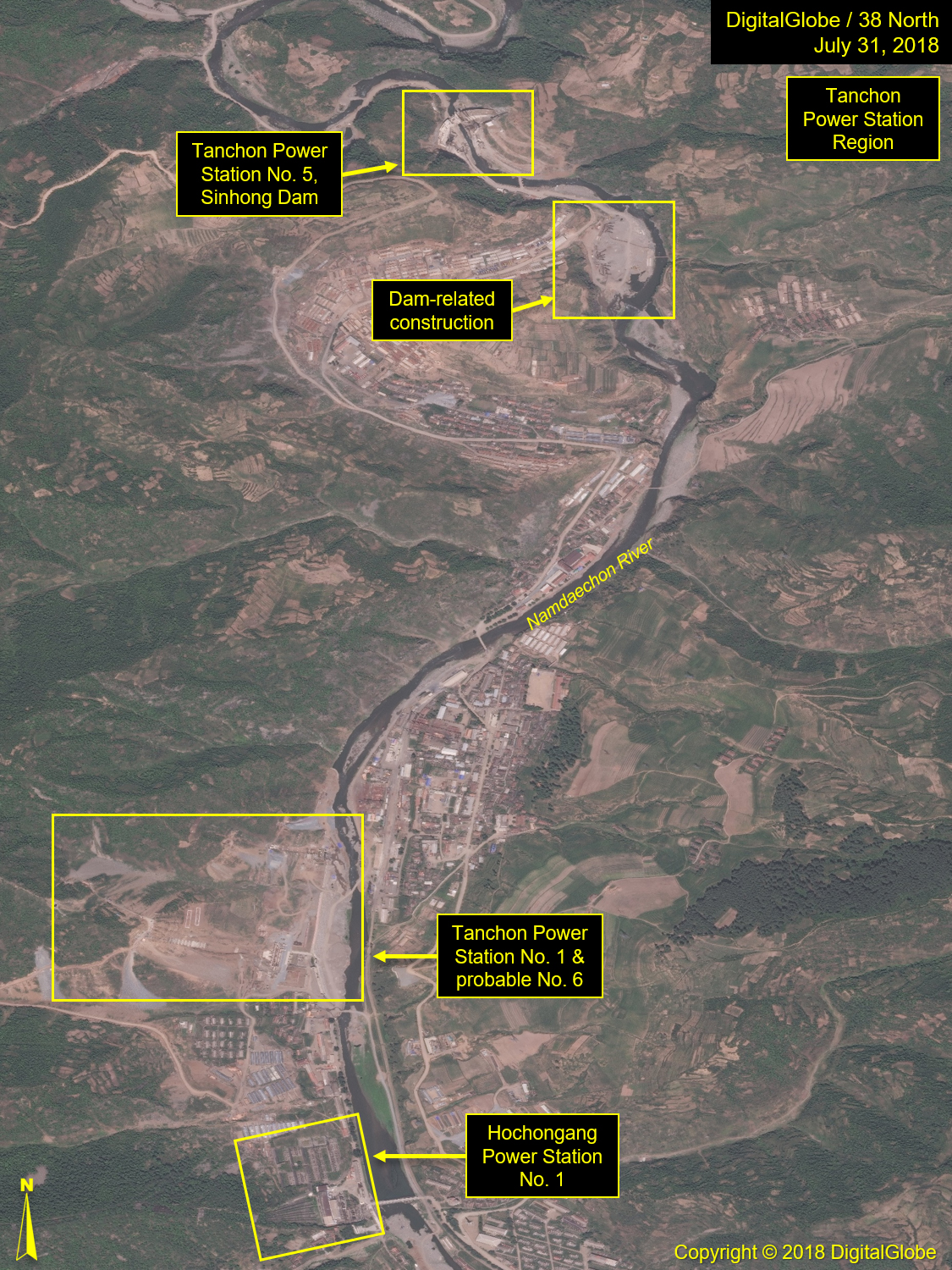 The hydroelectric Tanchon Power Station was first mentioned in Kim Jong Un’s New Year’s address in 2016, and again in his 2017 address. While details of the project have been sparse, a May 2017 article published in the Pyongyang Times featured an interview with Hong Jong Min, a member of the construction panel at the field headquarters. When asked about the “the scale, phased goals and prospect of the project,” he explained:

The project involves the construction of several main dams and power plants that use the Jangjin, Hochon, Karim and other rivers and streams, as well as waterway tunnels running over a hundred kilometers. The construction of the power station, which is expected to generate several hundred thousand kilowatts…is the largest-ever project in the country’s history of building hydropower stations.

For its unprecedentedly huge scale, the project will be conducted [sic], divided into two stages. The first stage includes the building of dozens of kilometers of waterway tunnel No. 1, power station No. 5 and its dam and power station No. 6. (Emphasis added.)

Construction of the Tanchon Power Station Project officially began with a ribbon cutting ceremony on May 18, 2017, although a power shovel was present in imagery of the dam site on November 17, 2016. By November 1, 2017, construction had begun on the dam and continued in earnest with the presence of two cranes on March 29, 2018. A March 18, 2018 KCNA article referenced the arrival of the additional crane, and, for the first time, referenced the dam as the Sinhong Dam.

Figure 2. Overview of the construction progress at Sinhong Dam from November 2016-September 2019.

By July 31, 2018, just four months later, rapid progress had been made. In March, foundation sections for the dam were in place on the west side of the river but by July, the river had been spanned and the dam’s height had risen considerably. In addition, a concrete tailrace for the co-located generator hall, Power Station No. 5, was in place. By September 19, 2019, the dam was nearing its final configuration and height, however, the oblique viewing angle from the north precluded seeing any detail regarding the power station.

Four hundred meters downstream of the dam, tunneling activity along the west side of the riverbed has been ongoing since November 2017. Three openings, each supported by four conveyors to remove debris, are in place, and spoil piles are near to each. Three pairs of large diameter pipes were observed aligned along the river in March 2018 but have since been covered. Although the activity is related to construction, its intended purpose cannot be determined at this time.

Tanchon Power Station No. 1 is located 2 km downstream from Sinhong Dam. Excavation for the power station foundation was first observed in imagery of November 1, 2017. The station’s construction, like that of the Sinhong Dam, has moved forward at a remarkable pace. In imagery from September 18, 2019, the walls of the generator hall are nearly complete, but the roof has not been put in place, exposing the interior where the turbines are located. Stanchions for penstocks, which will feed into the hall, are in place, but the pipes for the penstocks are not present. The penstocks will run uphill to where a concrete surge tank has been constructed. The surge tank is the hub connecting the waterway tunnel to the penstocks and serves to regulate the water flow driving the generator hall turbines. 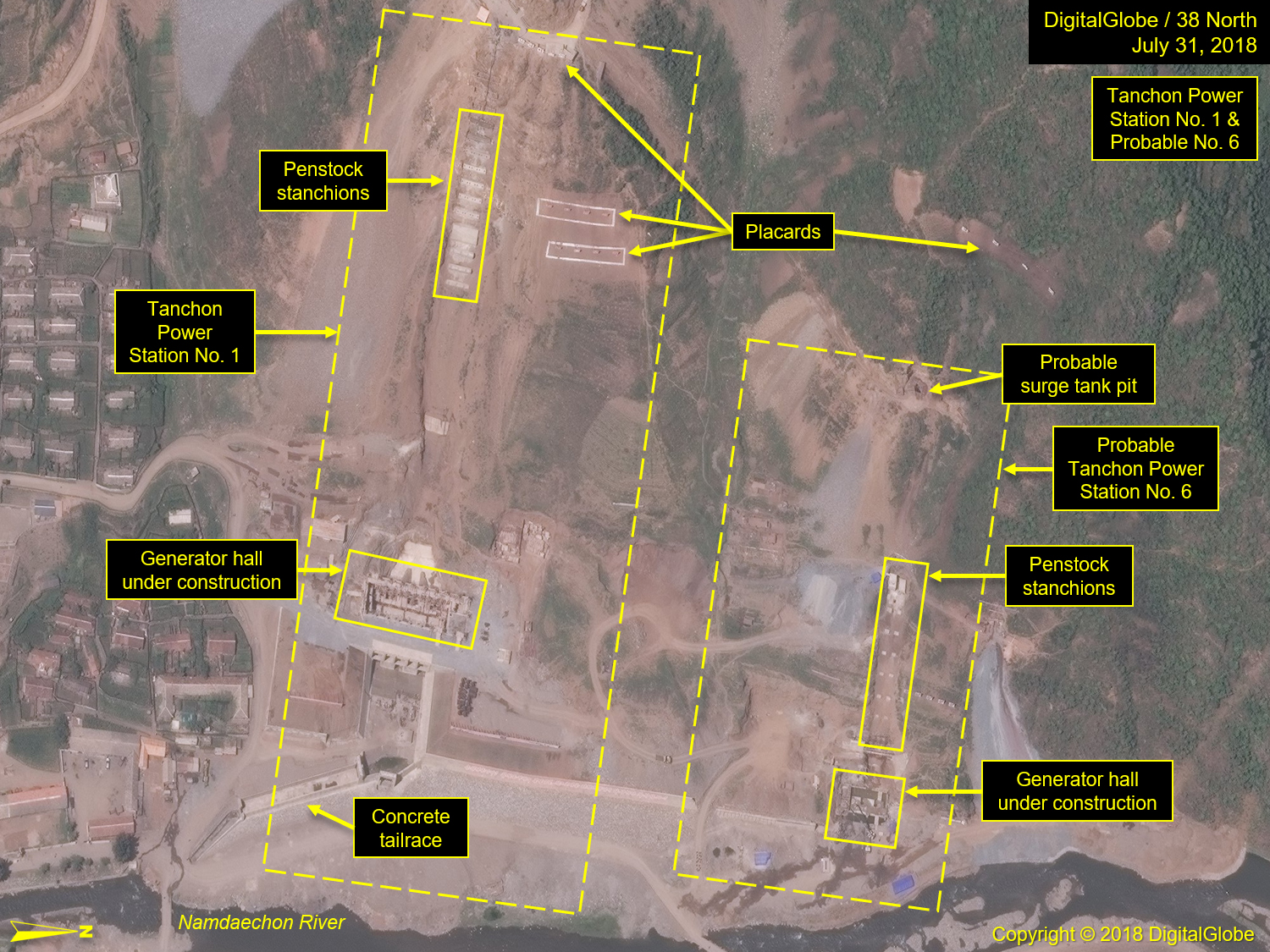 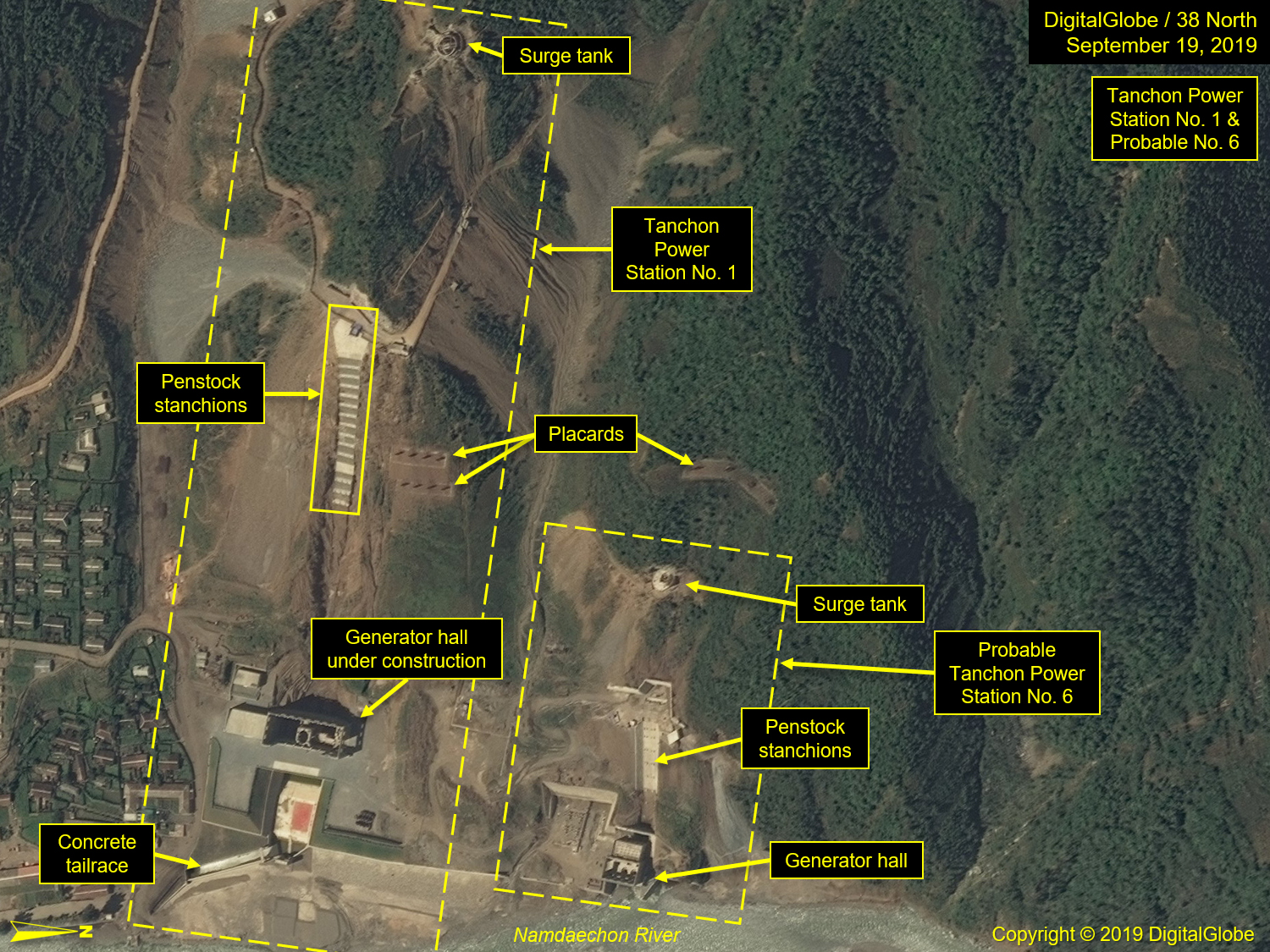 Immediately to the north of Tanchon Power Station No. 1 is another, smaller power station, possibly Station No. 6 referenced in the October 8, 2018 KCNA report, but with little detail. [1] Construction of this station, which is half scale compared to Station No. 1, was first detected in March 2018. Again, construction has moved along at a rapid pace, and like Power Station No. 1, much of the exterior of the generator hall is complete, absent a roof.

The construction of the waterway tunnels merits a separate discussion. While little can be seen of them, evidence of their presence and pathways can be found. To the west and northwest of the Tanchon Power Station complex are several reservoirs, any of which could be a source for a waterway tunnel. These lakes and reservoirs include three nearby, smaller ones, where one flows into the next. They are the Hwangsuwon, the Naejung and the Yangphyong Reservoirs, the latter where the Hochongang Dam is located. They are located 30 km, 18 km and 11 km, respectively, away from, and are known to feed into, the Hochongang Station No. 1 and the Tanchon project. Much farther to the west is the Jangjin (also called the Battle of Chosin Reservoir), the Pujon-ho, the Rangrim Dam and Phungso Dam reservoirs. They are located approximately 107 km, 80 km, 106 km and 40 km, respectively, away. These reservoirs share certain commonalities in that they were constructed decades ago and each have a large dam to contain their water, but none have a large power plant or substation co-located with them. Historical coverage of these reservoirs is sparse, but two, Pujon-ho and Jangjin, have visible pumping stations located within each reservoir, but distant from their containment dam. The Jangjin pumping station is a tower-type, similar to the one found in the Ryongrim Reservoir, which feeds the water tunnel supporting Huichon Power Station No. 1. While the distance of Jangjin to the Tanchon power project is greater than 100 km, and there’s little visible evidence to otherwise suggest the two locations are connected by a tunnel waterway, the Jangjin River was specifically mentioned by Hong Jong Min as being related to the Tanchon Power Station.

Figure 4. Close-up of the waterway tunnels at Tanchon Power Station No. 1. 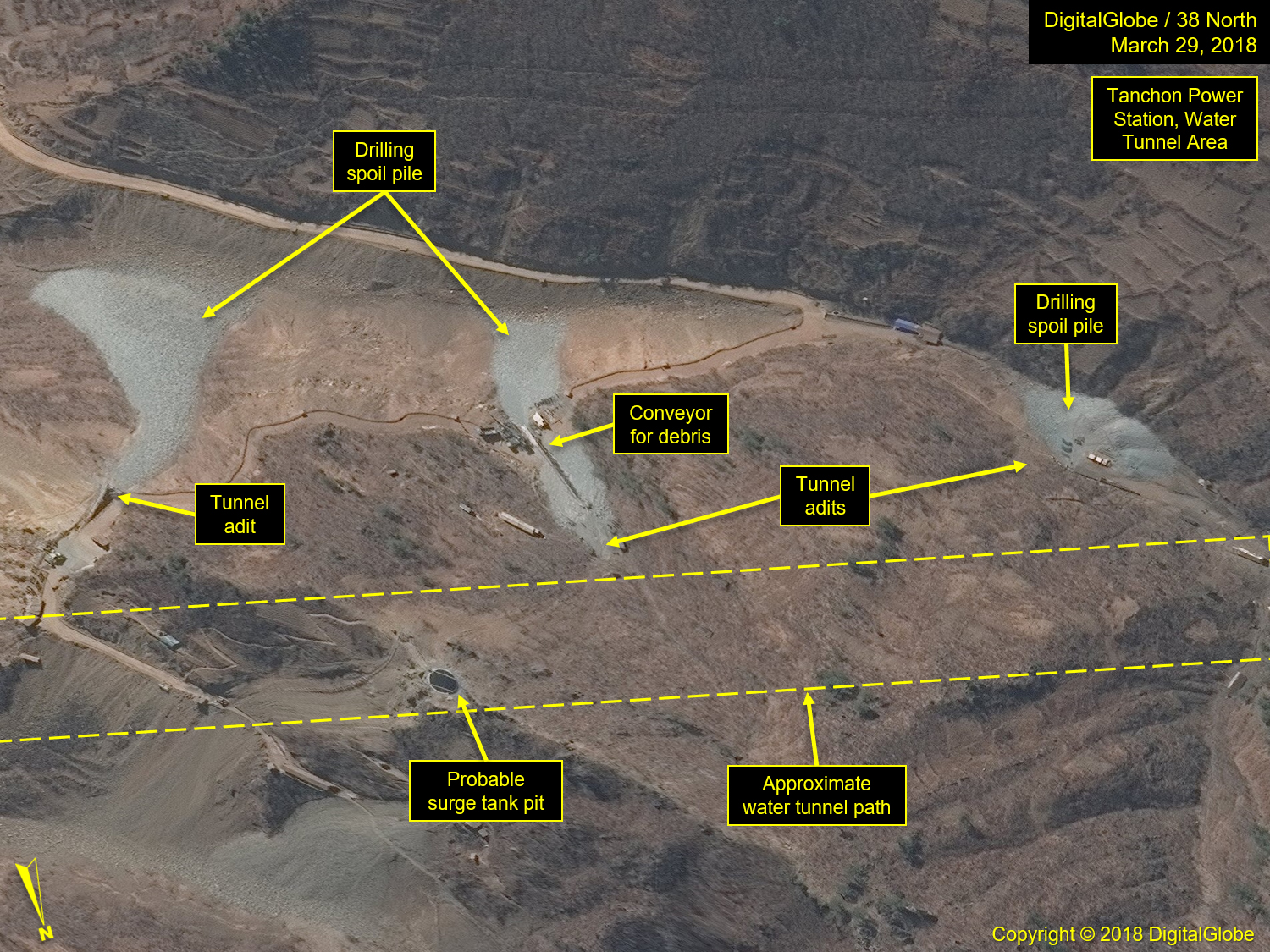 The Samsu Power Station Dam and Reservoir, located in the Ryanggang Province, approximately 55 km northwest of the Tanchon Power Station project, is an exemplar for waterway tunneling as it provides visual signatures for tracing their pathway, in this case, to the Tanchon project. According to a January 2019 Daily NK article, the Samsu Power Plant had ceased operations in 2014 due to continued leaking. Although not mentioned in the article, there is ongoing construction work at a large pumping station approximately 12 km south of the dam and evidence of trying to transport that reservoir water south to the Tanchon Power Station project. The visual signatures include the construction of the large pumping station and a linear sequence of tens of tunnel adits with light blue spoil piles, which are traceable going in a southernly direction from the pumping station toward the Tanchon project. These adits are needed because of the tunnel lengths and, therefore, openings are necessary to extract tunneling debris and allow worker access. As such, the adits and their attendant spoil piles become a unique signature in tracing a tunnel’s route.

The Tanchon Power Station Project is an ambitious and complex engineering strategy that relies on a system of dams, waterway tunnels, and power stations designed to provide a constant source of water to ensure the consistent generation of electrical power in the several hundreds of thousand-kilowatt range.

One notable feature to this strategy not seen in the Chongchon River system or the hydropower projects in the northwest region of the country is the use of underground waterways to improve the consistency of water provision to its hydroelectric power plants. This, in conjunction with the promotion of building both large and small-to-medium-sized power stations, is intended to improve the delivery of electrical energy to the nation.