“Kim Jong-un’s Terrible, Horrible, No Good, Very Bad Year.” As far as headlines go, that is hard to beat for flamboyance or lack of ambiguity. Yet also, surely, for utter wrong-headedness.

Even in August, when my friend Nick Eberstadt wrote the op-ed thus titled for the New York Times, this was a contrarian line. Most analysts reckoned that North Korea was doing pretty well. After the summit debacle in Hanoi in February, Kim had defiantly resumed testing ballistic missiles—while rebuffing US efforts to hold working level talks on denuclearization. Yet he was rewarded with a third meeting (albeit brief) with a smiling Donald Trump, this time at Panmunjom in June.

For Eberstadt, that “scene had all the makings of a public humiliation.” Kim “scurried down to get whatever face time [Trump] would grant him.” Five months later, this odd reading needs revising, or even reversing. If anyone was humiliated, it wasn’t Kim Jong Un. (How about the nominal host, ROK President Moon Jae-in, shut out of a meeting held in his own country?)

“For perhaps the first time, America seems to be outmaneuvering Team North Korea.” Even in August that boast seemed implausibly sanguine. Would Eberstadt claim the same now?

I would argue the exact opposite. As 2019 ends, Kim Jong Un holds all the cards. No change there: when does he not? The US is on its back foot and floundering.

In Seoul recently, that nice Mr. Biegun sounded almost plaintive: “Let’s get this done. We are here and you know how to reach us.” Thus is the global superpower reduced to pleading with North Korea, which manifestly is no longer interested—having reverted to taunts and insults. 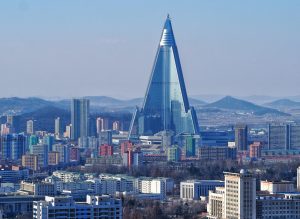 Once again they have us on tenterhooks. We can only wait to see what “Christmas gift” (their sarcastic phrase) Pyongyang has in store. There will be stern words, for sure: at the imminent Party plenary meeting, and in Kim’s New Year address. And doubtless there will be matching deeds, as North Korea’s self-set deadline for the US to change course goes unmet. Resumed ICBM launches? A fresh nuclear test? Both? Or something else, taking us by surprise?

As we worry and wait, it is timely to look back—though hardly more cheerful than looking forward, to be honest—and reflect. What have the past three years taught us? Where are we now? For starters, can we at least agree on how to periodize and characterize 2017-19? With rare neatness, each of these successive years was strikingly, if confusingly, unalike.

From Fire and Fury to Summits and Spectacle

In 2017, we had “fire and fury,” Donald Trump’s chilling phrase. (He liked it so much, he said it twice.) The DPRK continued to test ever bigger and better missiles, as it had in 2016. The newly elected US President riposted with threats. Insults were lobbed: “Little Rocket Man,” “dotard.” Tellingly, having approved an expert of hawkish repute as the next US ambassador in Seoul, the White House ditched Victor Cha for saying that he would not support any ‘bloody nose’ military strike on North Korea. The danger of conflict appeared very real.

In 2018, we were suddenly in a better place—or so it seemed. From Fire and Fury to Peace and Progress? Not so fast. Make that Summits and Spectacle. It all looked momentous at the time. North Korea gate-crashed the South’s Winter Olympics party at Pyeongchang, admittedly to the party-giver’s delight. Kim and Moon met three times in six months, signing two meaty accords. Above all, US and DPRK leaders met for the first time ever, in Singapore—even if they agreed to nothing of substance, only an outline agenda whose blanks never got filled in.

Delays and Delusions, Taunts and Tests

All that too is now history, alas. For 2019 was different again. More contentiously than Fire and Fury or Summits and Spectacle, I would call this a year of Delays and Delusions, Taunts and Tests. Nothing agreed in 2018 progressed, whether denuclearization or the wide-ranging cooperation that the two Koreas had embarked on. After Hanoi, everything ground to a halt.

Instead, from May, the DPRK resumed testing new weapons systems. Its nominal dialogue partners both made light of this. “Routine stuff” according to Trump, while the ROK Joint Chiefs of Staff talked of ‘projectiles,’ seemingly gagging on the word missile, let alone ballistic.

North Korea also fired words. In April, Kim criticized Moon’s ‘meddling,’ while in August, Pyongyang called him an ‘impudent guy.’ US figures, such as Mike Pompeo and Joe Biden, also got tongue-lashings. Trump had been pointedly exempt—but no longer. This month the D-word (dotard) has resurfaced: not in anonymous media commentary, either, but with two separate senior DPRK spokespersons openly taunting the US President. One can only wonder why they have decided now to goad him thus, and whether that is a wise move.

To be fair, Seoul now calls a ballistic missile a ballistic missile. Yet even as the missiles flew again, both the US and ROK governments clung, and to a degree still cling, to the pretense that all was well. A peace process is ongoing; it just needs more time. But frankly, this is delusional. In truth, 2019 is the year everything stopped—except Pyongyang’s tests and taunts.

Actually, not everything stopped. Western media, and some analysis, underplayed the third prong of 2018’s DPRK summitry, which in fact was and is the key element: mending fences with China. That process (unlike the other two) continues, further strengthening Kim’s hand.

No one could fault the ROK or US for seeking peace: a noble goal. Patience too is a virtue. But pretense is another matter. Nor are the two cases identical. Trump’s weird bromance with Kim—“I love the guy”—was always a figment of his vanity, played on by Pyongyang.

By contrast, in 2018 the two Koreas really seemed to be building something solid and new. Yet even before Hanoi, Kim froze everything. So for Seoul to spend most of 2019 echoing Voltaire’s Dr. Pangloss—professing blithe optimism that all was somehow for the best—convinced no one and made no sense. As I have argued before, South Korea gains nothing, least of all the North’s respect, by meekly turning the other cheek.

After three such contrasting years, what will 2020 bring? We’ll know soon enough. Or at least we shall see what provocation Kim comes up with. The challenge then will be how best to react to it. With a loose cannon in the White House, and regional alliances sorely strained by Trump’s pressure over USFK hosting costs and the ongoing ROK-Japan row, the fear must be that Kim Jong Un is heading for another good year, while his enemies squabble and flounder.