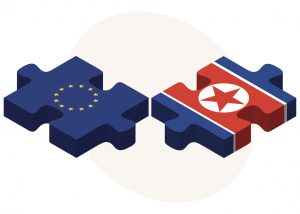 I read with interest the piece carried in 38 North on March 2 on European Union (EU) relations with the DPRK. As some of those who prepared it will know, I have long been in favor of a more robust EU engagement policy towards the DPRK. I argued for it when in government and have continued to do so since I retired. I fear that except for a brief period between 2000 and 2002, the general reception of the argument has tended to fall on very stony ground. So, while I sympathize with the views in the paper, I do not think that they are likely to find much support at a political level among EU member states.

North Korea has few friends in Europe, or indeed, few people who have direct experience of the country. Many of those who comment on it have little or no direct experience or specialist knowledge. In Eastern Europe, there are people with knowledge, including officials and politicians—although often this does not lead them to a very positive view of the DPRK. In Western Europe, numbers are much smaller. This lack of involvement has a long history. The country is seen as a bizarre hangover from the past, with some very unpleasant characteristics.

Apart from the former communist countries, most EU countries established diplomatic relations with North Korea because such a move was encouraged by South Korea as a means of bringing the North into international society and encouraging Kim Dae-jung’s engagement policy, rather than from any special interest in the country itself. Hopes for change faded, partly because the change of US presidents from Bill Clinton to George W. Bush ended US support for the engagement policy. Like the US, EU policy became increasingly concentrated on human rights issues and the North Korean missile and nuclear weapons development.

Even during the brief honeymoon period, when there was a short-lived EU-DPRK dialogue on the subject, human rights was pushed hard by some EU countries. I vividly remember having to persuade a young North Korea foreign ministry official from throwing a punch at a visiting ambassador from Seoul who was also ambassador to the DPRK as they argued outside our embassy after an apparently bruising meeting on human rights.

Proliferation has also been an EU concern. Until relatively recently, this was mainly a matter of principle and support for the Nuclear Nonproliferation Treaty and the United States. But some European politicians, especially in Britain and France, have begun to express concern that North Korea could target Europe. Although North Korean officials have denied that there is any such intention and that they do not consider themselves as in any way threatened by European countries, the argument is used to justify the continued possession of nuclear weapons by European countries.

Any form of assistance to North Korea, even basic humanitarian assistance, has met with criticism from some quarters in Europe. These include some religious or quasi-religious organizations, but also charities. Training and education are said to benefit only the elite and thus help to perpetuate the system. It was claimed by a member of Britain’s upper house of parliament, the House of Lords, that a young peoples’ handicapped performing group that visited the country a few years back was a mere propaganda tool and should not have been accepted.

So, there are few European interests at stake with North Korea and, to be frank, even fewer pressure points that the EU can apply. The EU at a political level wants the US to remain committed to the defense of Europe, and is therefore content to follow America’s lead, even under the present administration, on Korean matters, since the US is seen as having more direct interests and more leverage than Europe. The EU has more or less stopped whatever bilateral aid it or its member states gave to North Korea, and there seems to be no disposition to go back to pre-2017.

I wish it was different, but fear it is not.