Commercial satellite imagery from late February of North Korea’s Yongbyon Nuclear Scientific Research Center indicates that the railcars that had arrived in the area by February 10 had departed by February 26. The movement of the railcars throughout the complex suggests they could have been transporting reagents used in various nuclear fuel production and/or waste handling and decontamination processes. Without corresponding indicators of activity at the Radiochemical Laboratory, they are more likely associated with activity at the suspected Radioisotope Production Plant or Uranium Enrichment Plant (UEP). There are no signs that the products transported were radioactive.

While there are no indications that the 5 MWe Reactor or the Experimental Light Water Reactor (ELWR) are in operation, fresh snowfall present on February 19 revealed continued low levels of activity throughout the complex.

Satellite imagery shows that the three specialized railcars, configured to carry cylindrical containers and observed on a rail siding, outside of boundaries of the complex, approximately 0.5 km west of the Radiochemical Laboratory facilities on February 11, were present at the spur servicing the suspected Radioisotope Production Plant and the Uranium Enrichment Plant (UEP) on February 19.

Each car is uniquely configured, the first having four canisters laid sideways or perpendicular to the car’s length; the cargo on the second is less certain, but appears to have two donut-shaped objects laying at either end of the car; and the third car has four cylindrical canisters laid sideways, with a probable fifth canister separating them, but placed perpendicular to the others. They joined a fourth specialized railcar that had been observed there on February 11.

The three newly arrived cars were parked together, whereas the fourth, configured with five containers, remained parked at a platform at the transfer terminal consisting of two small buildings and three cylindrical, vertical-positioned liquid storage tanks. It is serviced by steam pipes that originate from a plant located on the northwest side of the UEP facilities. It is likely the steam is intended to prevent the content of the liquid storage tank from freezing during the winter months. The railcars were also present on February 23, but all had departed by February 26. 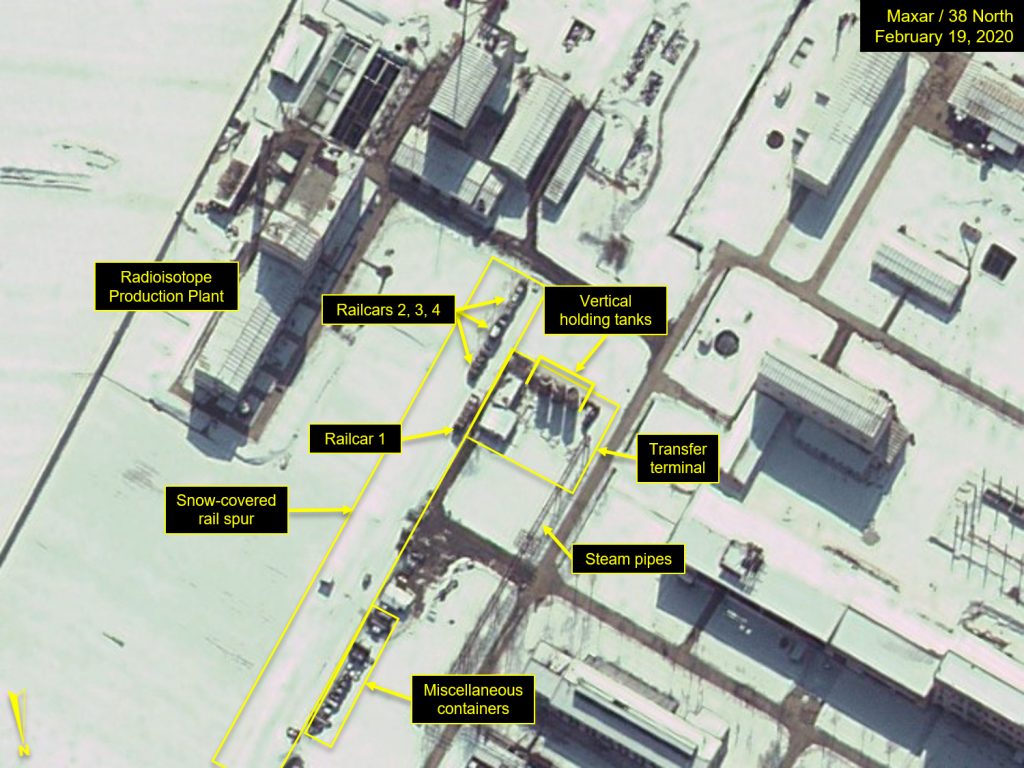 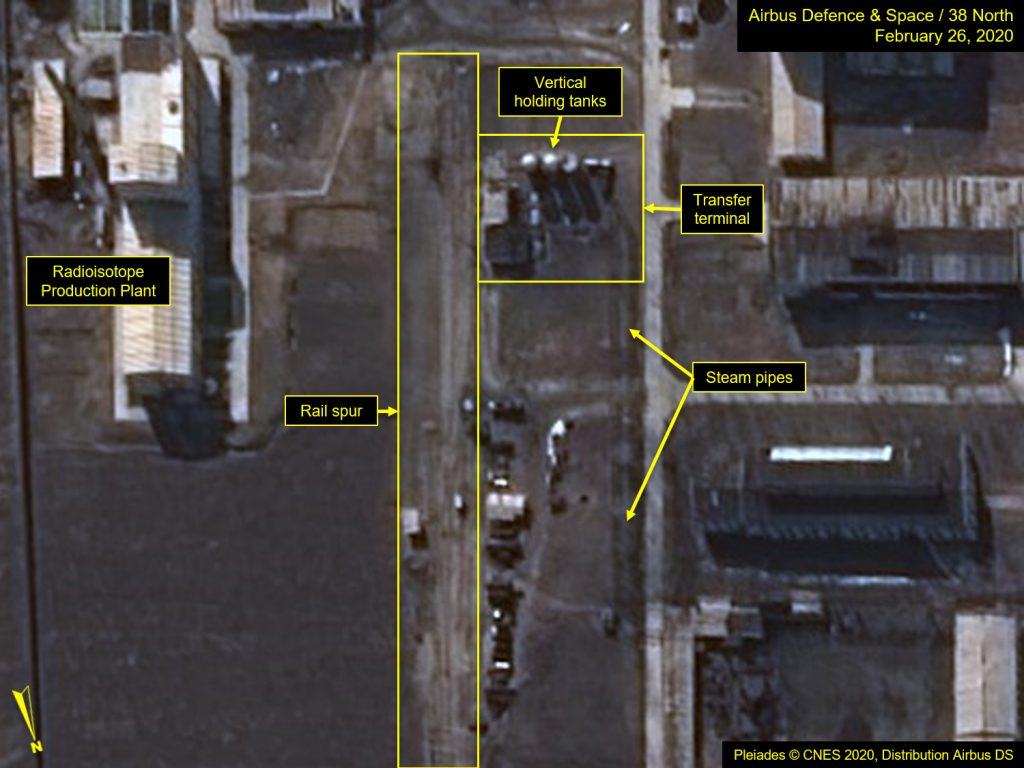 While the exact purpose of these railcars is unclear, the casks or canisters on the railcars could be transporting reagents used in various possible nuclear fuel production processes and/or waste handling and decontamination or to maintain the associated equipment. It is also unknown whether these specialized cars had deposited their cargo while on site or had been loading new cargo before their departure. These railcars have been observed at this spur on a periodic basis since at least 2002. Without corresponding indicators of activity at the Radiochemical Laboratory, they are more likely associated with activity at the suspected Radioisotope Production Plant or Uranium Enrichment Plant. Nor is there evidence that they carry radioactive materials.

On February 19, snow removal after a recent snowfall had begun on most of the internal roadways and pathways, suggesting patterns of personnel and vehicular movement to and from many of the buildings, including the transfer terminal. Partial snowmelt observed on the roofs of a few of the buildings indicated activity within those structures.

However, the presence of snow on other roofs does not necessarily mean there is no ongoing activity inside those buildings. For example, due to major energy production shortages, internal temperatures of industrial buildings are often kept well below Western standards in the winter, if they are heated at all, relying instead on equipment operation to generate heat. Additionally, while many of the buildings within the Yongbyon complex house machinery and other pieces of equipment that may generate heat, they might not generate enough to cause snowmelt on the roof. Moreover, some specialized equipment requires separate insulation, which would also preclude heat loss and snowmelt.

Figure 3. Visible snowmelt on buildings around the Uranium Enrichment Plant on February 19, 2020.

While no unusual activity was observed in the Radiochemical Laboratory area, two probable trucks were seen on the road entering the Fuel Reception Area on February 23. Several trucks were also observed in the motor pool area during this period of coverage. Combined with the snow removal from the internal roadways and tire tracks and pathways created in the snow, these factors indicate activity at this facility.

Snow removal from all the roads to both the 5 MWe Reactor and ELWR areas was evident on February 19. A small portion of the upper roof of the 5 MWe Reactor showed signs of snowmelt, but nothing to suggest the reactor is operating. Three cargo trucks were seen on the east side of the building—a number consistent with what has been observed there over the past few months. A tanker trailer was parked next to the reactor building on February 26, the purpose of which is unknown. Activity in and around the ELWR was minimal with only one or two vehicles in the area.

Figure 5. Vehicles and cargo trucks visible around the 5 MWe Reactor on February 19 and 26. 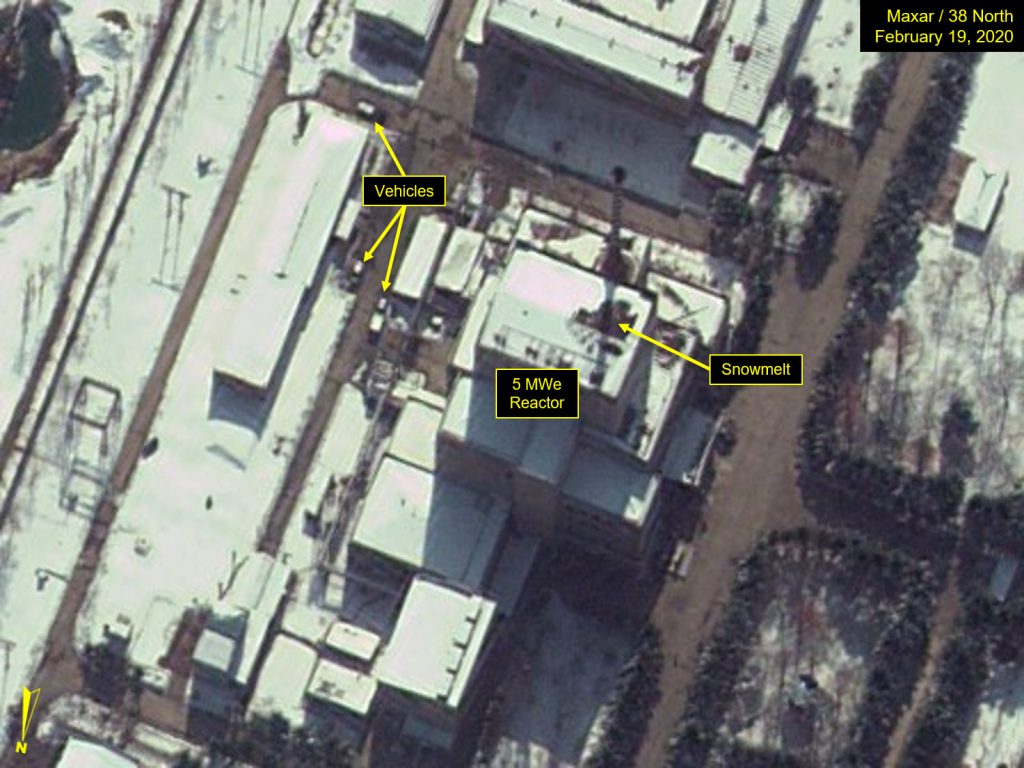 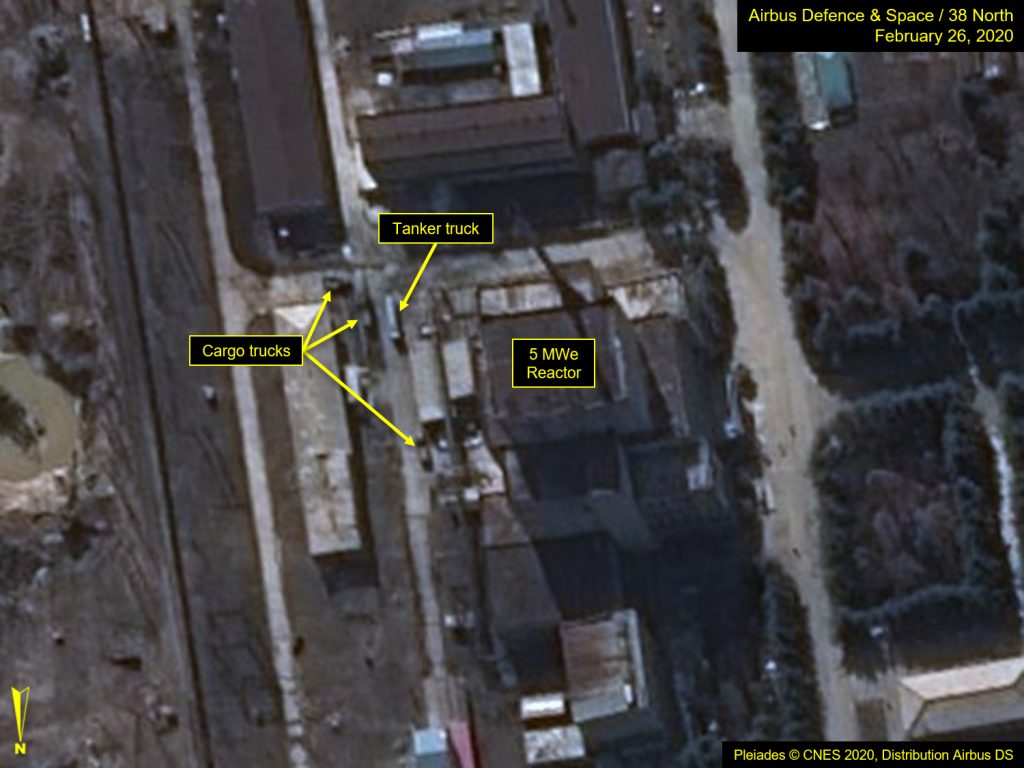