Construction on the highly touted Tanchon Hydroelectric Power Station Project, reported to be the largest project in the country’s history of building hydroelectric power stations, appears to have lost momentum. Successive new reports in the Pyongyang Times boasted of the progress being made in the completion of the supporting waterway tunnels. However, recent commercial satellite imagery covering the surface components reveals another story.

The first mention of the Tanchon Power Station Project was in Kim Jong Un’s New Year’s Address of 2016, and while the project appeared to be off to a slow start, progress on the surface components suddenly moved forward at a remarkable pace between March 2018 and September 2019. Officials boasted that the project would incorporate hundreds of kilometers of waterway tunnels, designed to ensure a constant source of water would be available to power each plant’s generators; together, they were projected to deliver hundreds of thousands of kilowatts of energy and bolster the country’s struggling electric power industry.

According a May 2017 article published in the Pyongyang Times, featuring an interview with Hong Jong Min, the project has been divided into two stages; the first stage including the boring of dozens of waterway tunnels and the construction of Power Station No. 1, the Sinhong Dam and its incorporated Power Station No. 5, and Power Station No. 6.[1]

A Pyongyang Times article from March 4, 2020, suggested the project was continuing on pace. It stated, “The extension of major waterway tunnel of the first-stage Tanchon Power Station Project passed the 50 percent line,” but offered little insight into what that meant. A subsequent article on March 24 reported that:

The concrete coating of the waterway tunnel was completed at the construction site of the Tanchon Power Station. The builders introduced effective technical innovation plans including methods of reducing the shuttering time, and thus halved the working hours as compared to previously (sic).

While it is difficult to decipher its meaning, the reader might come away with the understanding that the boring of the tunnels from the water source to the power stations might be complete but the engineers had encountered issues which denied the tunnels a water-tight integrity.

Unfortunately, none of the tunneling discussion can be verified via commercial satellite imagery, however, imagery from March 13 did reveal a loss of momentum in the previously observed pace of construction on the surface components of the Tanchon Project.

Sinhong Dam and Power Station No. 5

Construction on the Sinhong Dam was first observed in November 2017, but work had not progressed in earnest until July 2018, when the river had been spanned and the dam’s base was in place. Within a 14-month period, the pace of construction was significant, with imagery from September 19, 2019, revealing that the dam was nearing its final configuration and height, and 400 meters downstream of the dam, tunneling activity along the west side of the riverbed had expanded to three openings, each supported by four conveyors to remove debris. Imagery from March 13, 2020, six months later, reveals little change to either construction site. Given the rapid pace of construction previously observed, it was anticipated the upper portion of the dam would have been completed by now, but it remains unfinished. While the reason for the sudden change in pace is not understood, several factors may have contributed to this including allowing more time for the concrete to cure, unforeseen problems in the dam’s construction, and/or a significant reduction in the workforce either due to COVID-19 containment measures or diversion to other construction projects such as the new Pyongyang General Hospital.

Figure 1. Little change to Sinhong Dam and Power Station No. 5 construction from September 2019 to March 2020. 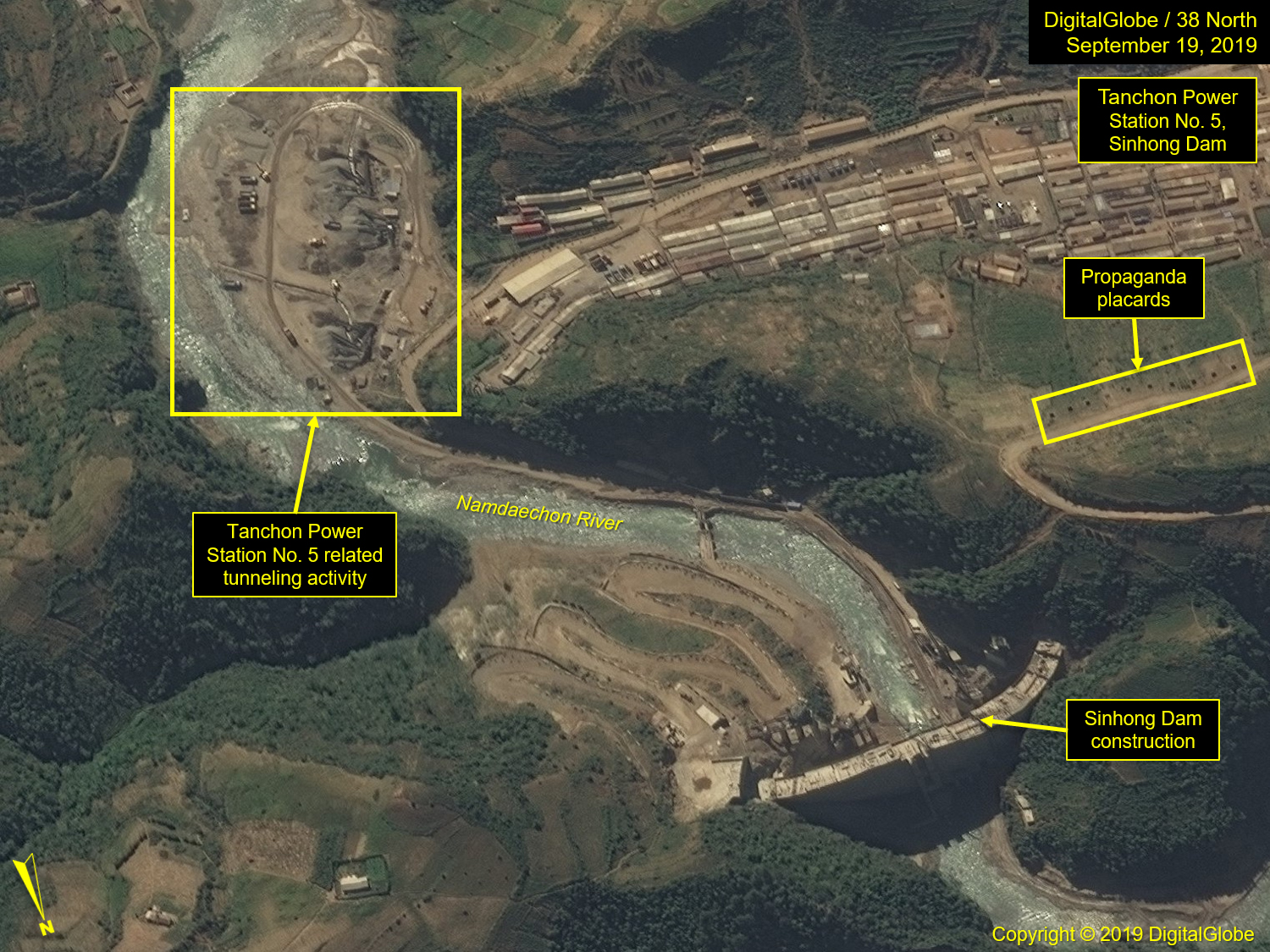 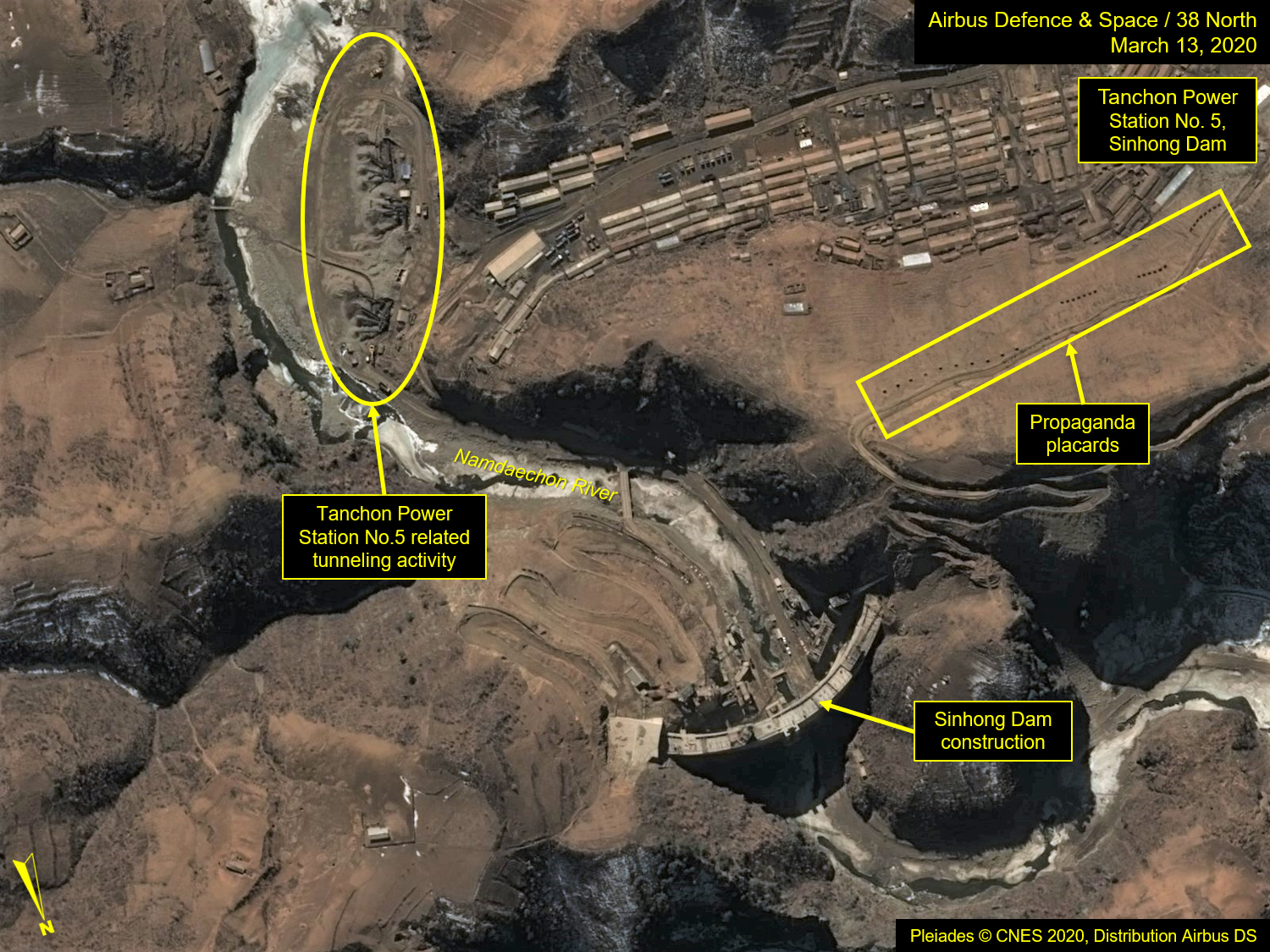 Power Station No. 1 is located 2 km downstream from Sinhong Dam. Excavation for the power station foundation was first observed on imagery of November 1, 2017, and when last observed on imagery of September 18, 2019, the walls of the generator hall were nearly complete, although no roof had been added. Stanchions for the penstocks, which would feed into the hall, were also in place, as was a concrete spillway located just below the generator hall. Imagery from March 13, 2020, revealed a slower pace of construction akin to that of the Sinhong Dam, with virtually no observable changes. 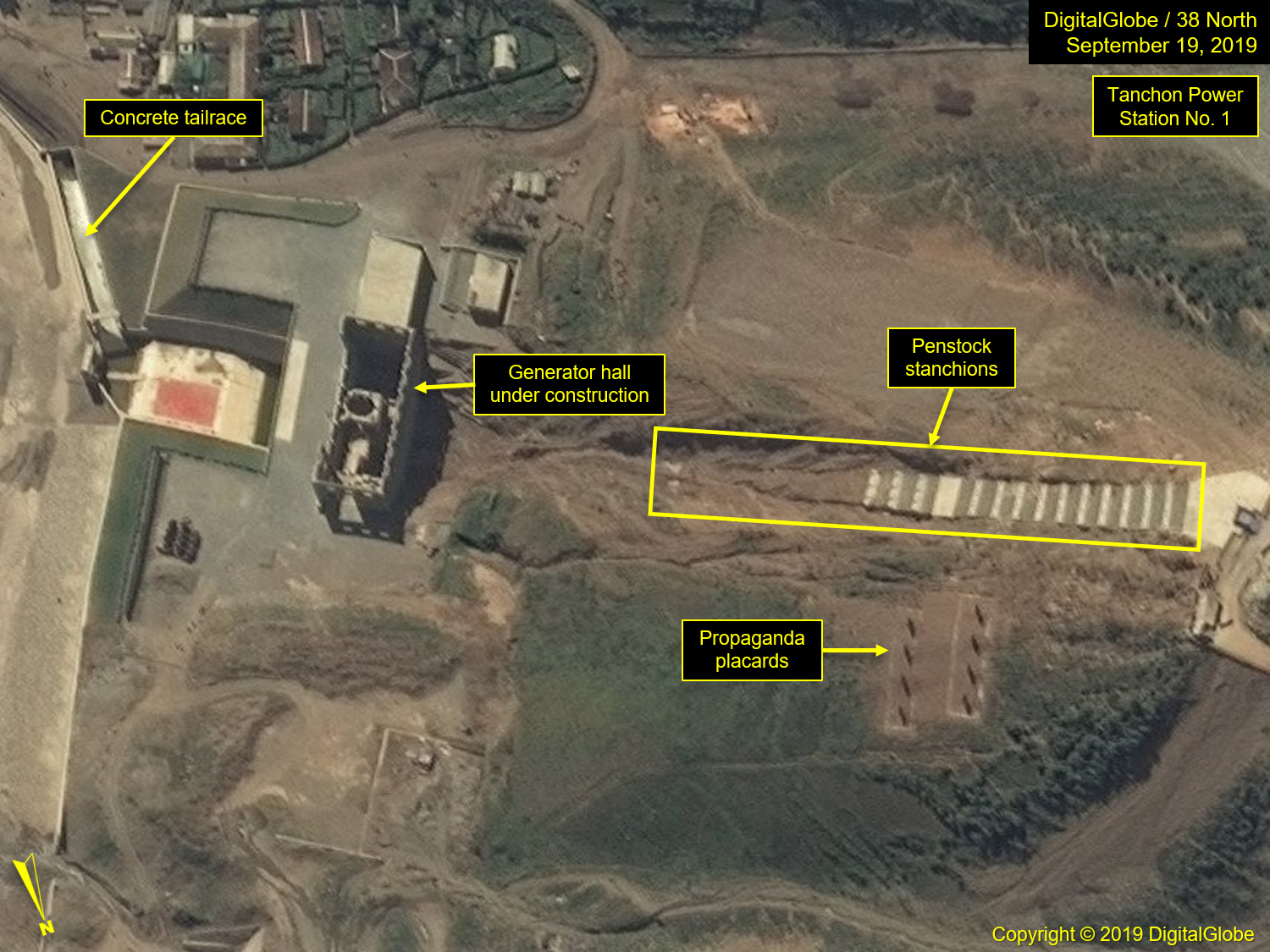 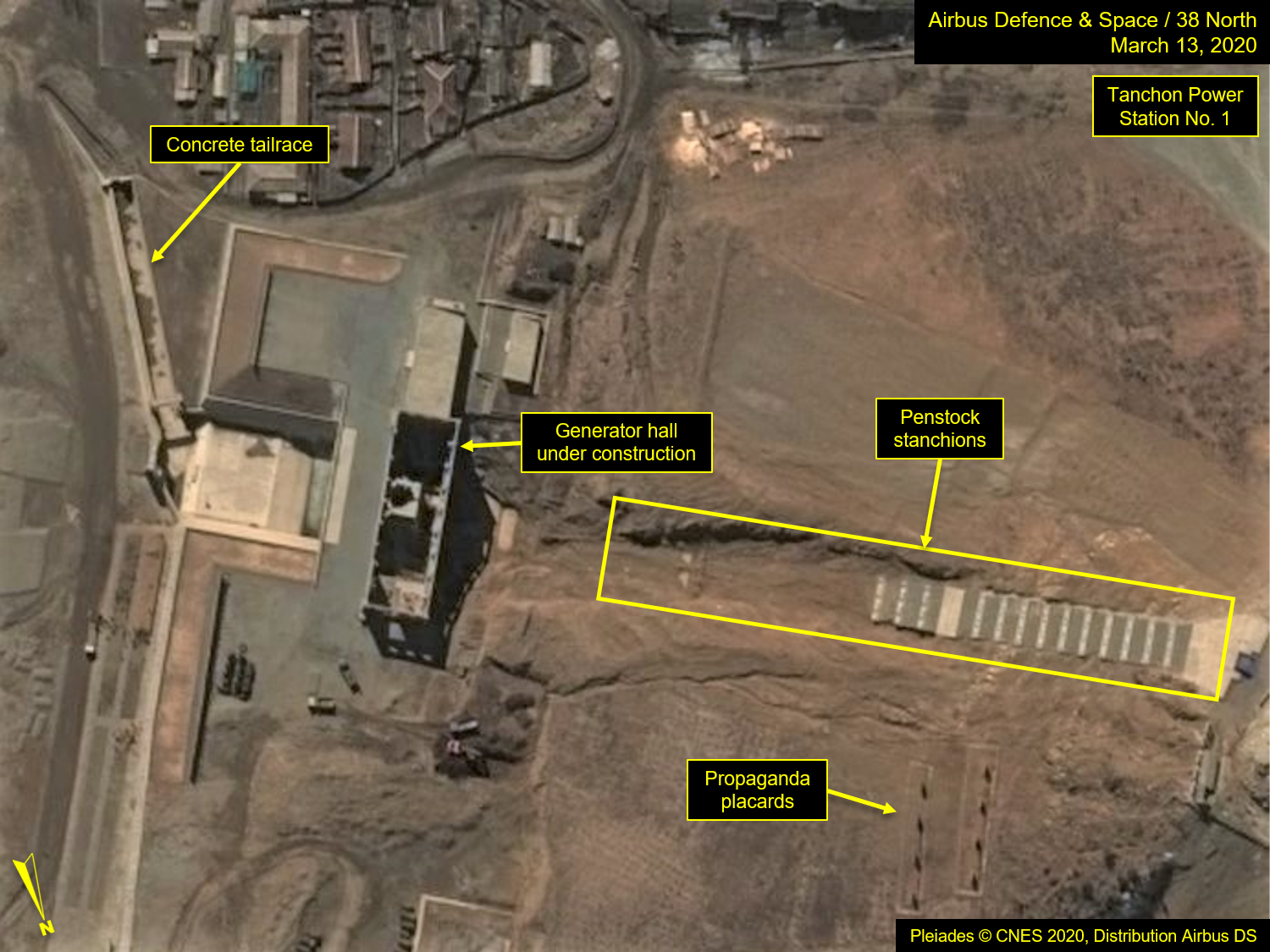 Immediately to the north of Tanchon Power Station No. 1 is a smaller power station, whose identity remains unconfirmed, but is likely Station No. 6. While few changes have occurred since September 2019, imagery from March 13, 2020, reveals that the penstocks servicing the generator hall are now in place, and there is now a roof over the lower east room of the generator hall. Work also continues on the substation located immediately to the south of the generator hall, and two rows of approximately 20 unidentified components are observed in a graded area just south of the substation. These components may be associated with the construction of the substation. 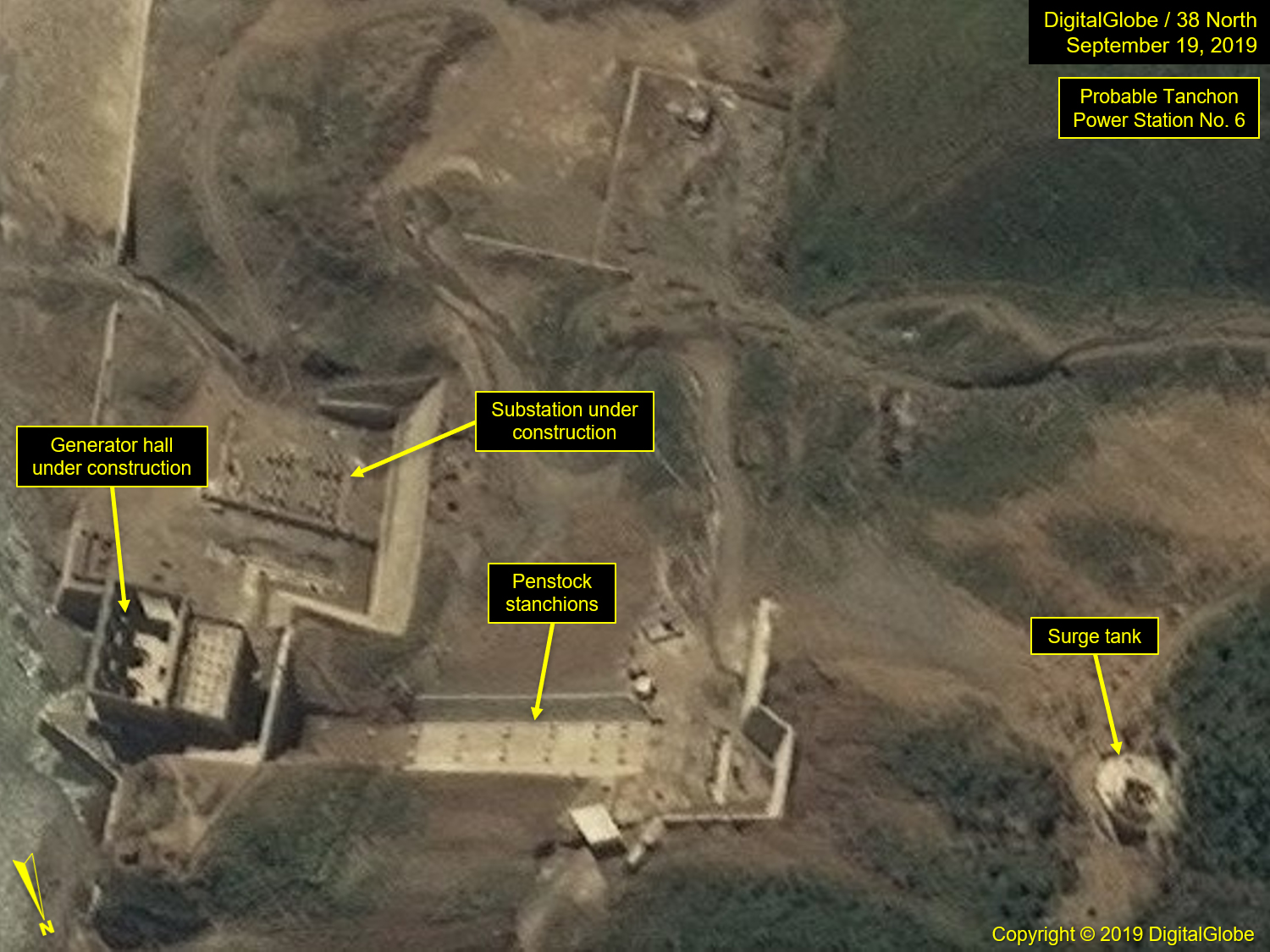 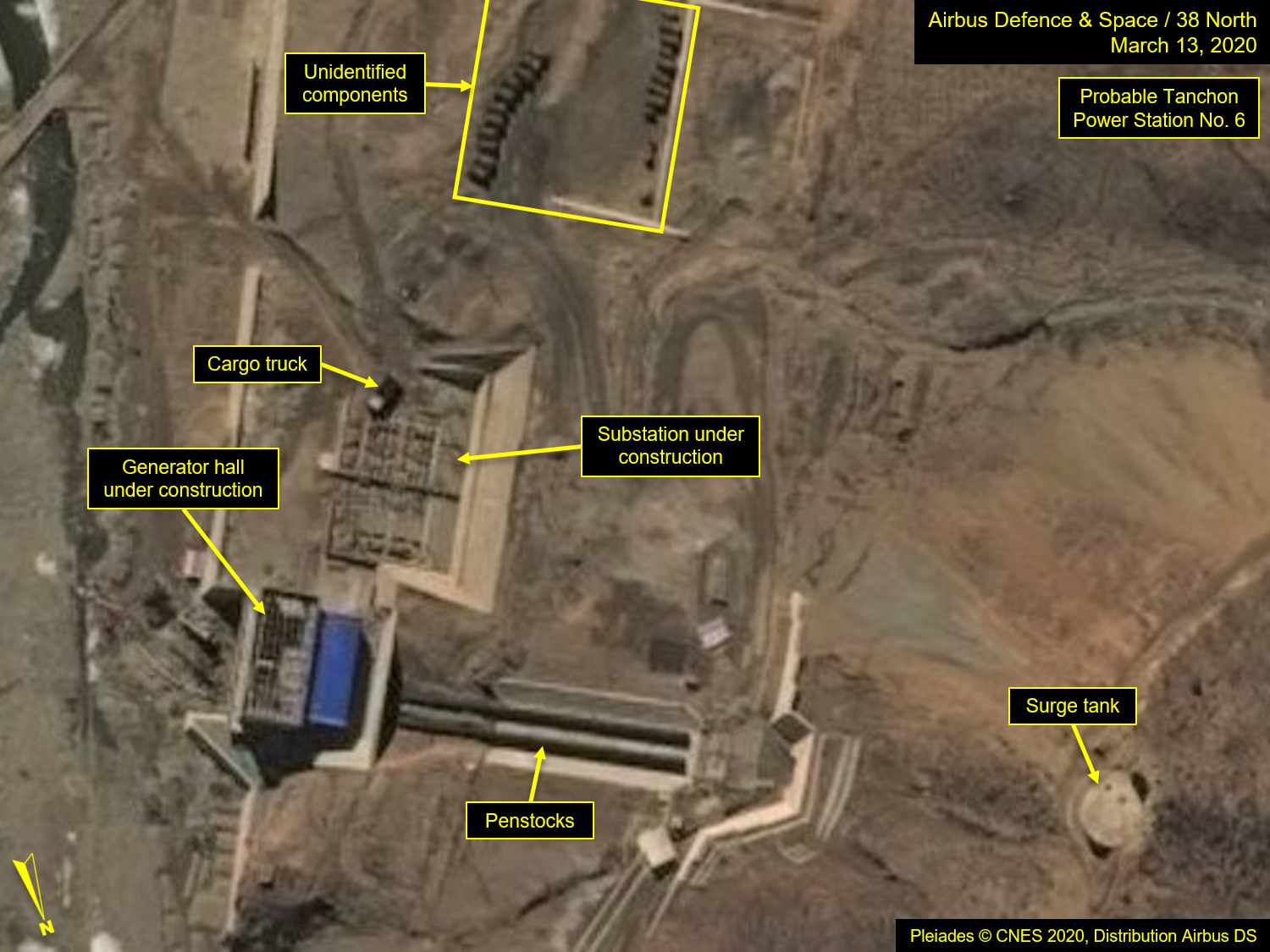 Hochongang Power Station No. 1, which predates the Tanchon Power Station Project, is located approximately 100 meters south. And approximately 100 meters south of that, tunneling activity in the river’s bed continues. While not as extensive as the tunneling activity observed just south of the Sinhong Dam, it too reveals little change in the past six months. Tunnel excavation may be ongoing as reported, however, there is no additional surface spoil observed. The possibility that debris is being removed from the site cannot be ruled out. Moreover, it remains unclear how and where this tunneling effort interconnects to the Tanchon Project.