To no one’s surprise, North Korea’s trade with China, already down from levels severely diminished by United Nations Security Council (UNSC) sanctions, fell 24 percent in January and February according to just-released data from Chinese Customs. Compared to the same period last year, China’s exports to North Korea fell to $198 million and its imports from North Korea dropped 74 percent to only $10 million.

China’s trade surplus declined to $198 million from $219 million in the first two months of 2019.[1] Two-way trade was in rough balance in 2016 prior to the sectorial UNSC sanctions. According to official data, the declines were even larger in percentage terms than China’s sharp drop in trade with the rest of the world, reducing North Korea’s ranking among Chinese trade partners to that of Malta.

The data, however, does not include Chinese pipeline deliveries of crude oil which are assessed to be about 50,000 tons a month, worth $10-20 million at current prices. North Korea prides itself on its economic self-reliance, but this level of external trade is hardly sustainable since vital consumer imports are now being affected, not just longer-term investment goods. One mitigating factor is North Korea’s trade is at its seasonal low point in the first two months of the year, due to holidays in China and freezing weather along the border. Should the disruption extend into the spring, far more economic damage will occur.

Pyongyang announced on January 21 that it was closing its land and sea borders and the closure remained through March, although there are signs that it may be slowly easing. China also has closed travel, creating an effective “double-sided fence” along the Yalu and Tumen Rivers; ship traffic observed by commercial satellite imagery out of North Korean ports is also much diminished. How fast trade will resume, however, is anyone’s guess. Suspicions of continued infected travelers will remain on both sides for some time given the lack of transparency in both Beijing and Pyongyang. Moreover, North Korea’s buying power continues to be weakened by UN sanctions on its main exports. Kim Jong Un had counted on tourist traffic to boost income this year but that hope certainly has been dashed by the pandemic.

Beijing took the unusual step this year of not releasing any of its trade data for January, instead combining it with February data and averaging each of the two months so that they are identical. The disruptive nature of the virus on China’s bureaucracy and the highly seasonal nature of both January and February data presumably forced this action. Normally, the data is widely considered to be less than accurate given strong price incentives to continue trading and extensive smuggling. The border closures, however, have doubly hampered smuggling so the customs data may be more representative than normal. 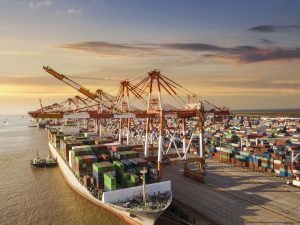 Chinese imports for the two months fell to essentially nothing. Particularly worrisome to Pyongyang must be the fall in several non-sanctioned goods, such as watches and hairpieces that had been on the rise. Factories in China supporting that trade have likely been temporarily shut down. The fall in Chinese exports occurred across the board, although watch timing devices and textile materials held up, both of which are processed into finished products in North Korea and re-exported, suggesting there is some optimism that the return trade will resume soon. Plastics and other petrochemical products, essential to North Korea since it lacks petroleum resources itself, dominate the trade that does occur, along with food products. Perhaps not surprising, the tobacco and pharmaceuticals trade remains strong.

A continuing question for the outside world is what impact all of this is having on North Korean finances, about which the government says next to nothing. Are they running out of foreign exchange that will force major foreign and domestic policy changes? Ironically, the coronavirus shutdown helped narrow Pyongyang’s wide goods trade imbalance but it also likely reduced the country’s corresponding surplus in services, such as tourism and overseas workers’ remittances. Even so, the won has held steady in widespread grey market trading, according to Daily NK and Asia Press (Rimjingang) reporting, possibly due to continued, very tight monetary policy that restricts credit inside the country in order to prevent the kind of currency crisis that occurred ten years ago. None of this appears sustainable, however, and some important prices appear to be rising. Imports of consumer goods, and eventually industrial investment goods, will have to grow, or Chairman Kim will face a very dissatisfied public.