Commercial satellite imagery of the Yongbyon Nuclear Scientific Research Center from August 6 reveals significant flooding along the Kuryong River, perhaps the worst in the past several years. Despite ongoing efforts to improve the embankment along the river against annual flooding, they failed to meet the challenge of this year’s rising waters, which reached the pump houses. More importantly, the flooding exposed how vulnerable the nuclear reactors’ cooling systems are to extreme weather events, in this case, for the potential for damage to the pumps and their power systems, or for clogging of piping systems that draw water from the river. Although the 5 MWe Reactor does not appear to have been operating for quite some time and the Experimental Light Water Reactor (ELWR) has yet to come online, both would need consistent water flow to operate. Therefore, if or when either of the reactors is operating, clogged intakes and/or broken or damaged pumps would necessitate a shutdown.

Partial coverage of the area from August 8 and 11 shows the waters have retreated, suggesting that the major facilities within the complex, such as the Uranium Enrichment Plant (UEP), have been spared.

The August 6 imagery, when compared to imagery from July 22, shows a dramatic rise in the water level of the Kuryong River that flows alongside the Yongbyon complex. Although the security wall around the reactor complex was not breached, the water had reached the two pump houses that service the reactors and completely submerged their respective bases. The overfall dam that was built to ensure a constant reservoir of water and is available for cooling the reactors was also fully underwater.

Damage to the pumps and piping within the pump houses presents the biggest vulnerability to the reactors. If the reactors were operating, for instance, the inability to cool them would require them to be shut down. And while the river waters may recede rapidly, if damaged, the pumps themselves could be out of service for some time, depending on their level of damage and whether replacement parts were readily available. While the service channels were totally submerged, they were probably not damaged, although they could be clogged with debris due to the flooding.

Figure 1. Flooding along Kuryong River by the reactor complex. 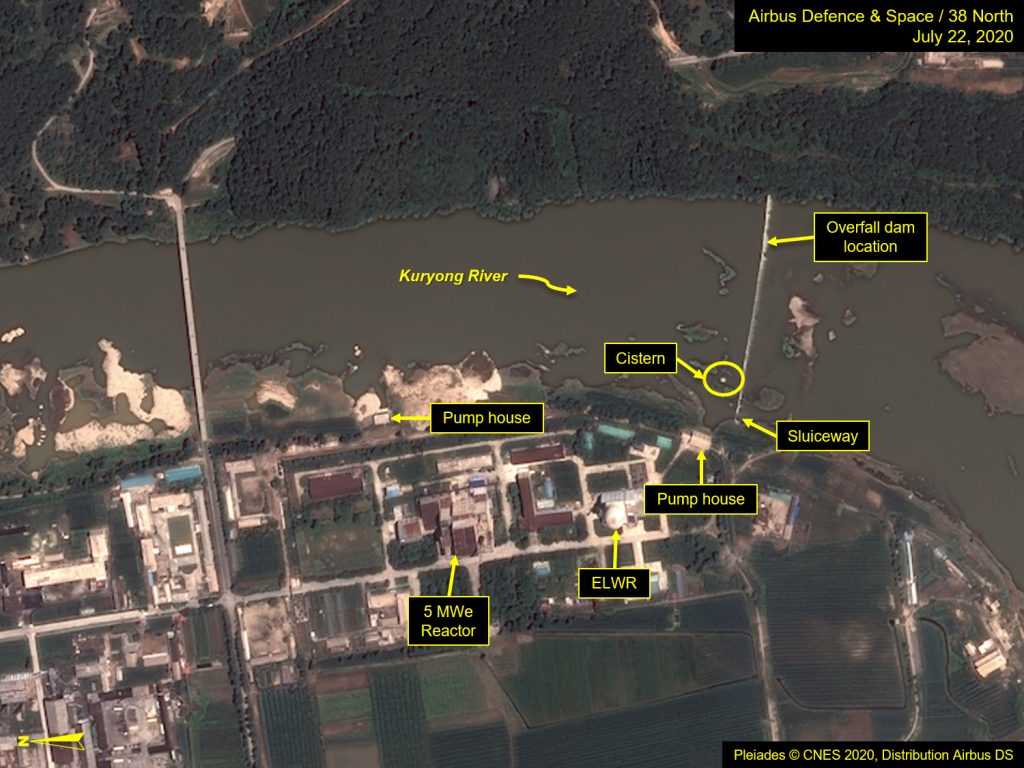 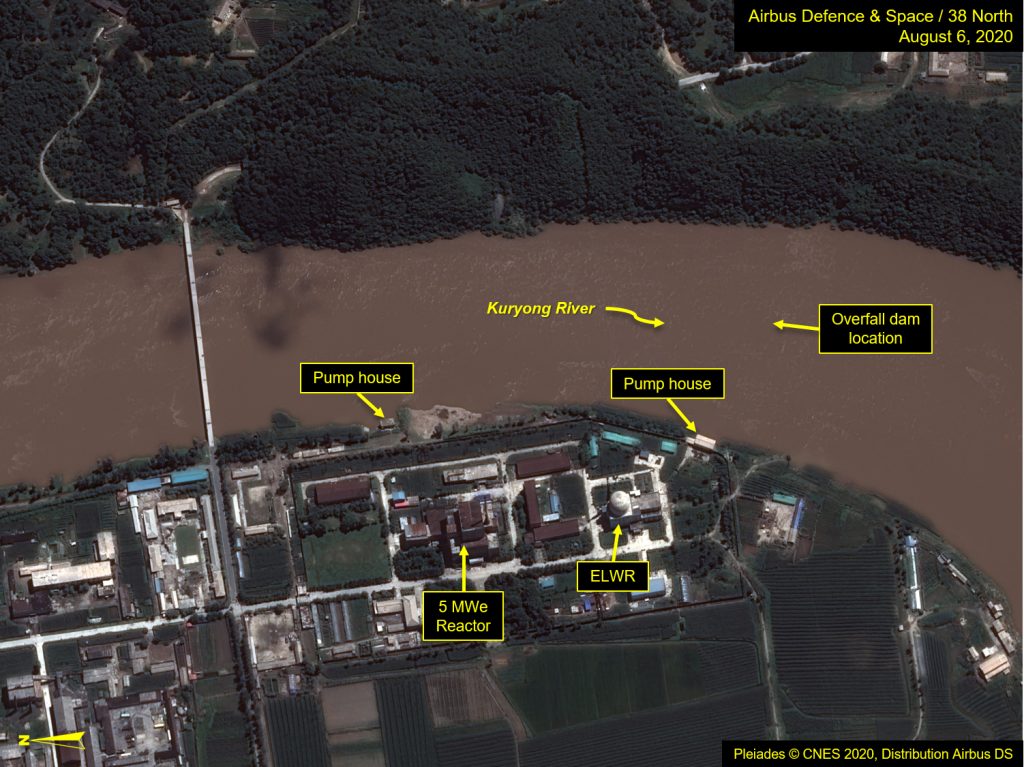 Further downstream, the river overflowed its banks at several locations, although not to the point of reaching the UEP area. Construction on a new bridge and causeway, which spans the river at a particularly wide bend, was completely underwater.

On imagery from August 8, the two river channels that had been created to funnel the water around the bridges appeared undamaged, and the two bridges remained in place, although the extent of damage, if any, could not be assessed based on the imagery.

Activity within the UEP was light with a few vehicles present. The imagery resolution was insufficient to determine the full extent of changes to the area where one of the cooling units was previously reported as being removed and others may have been placed nearby.

Figure 3. Flooded channels and causeway near the UEP. 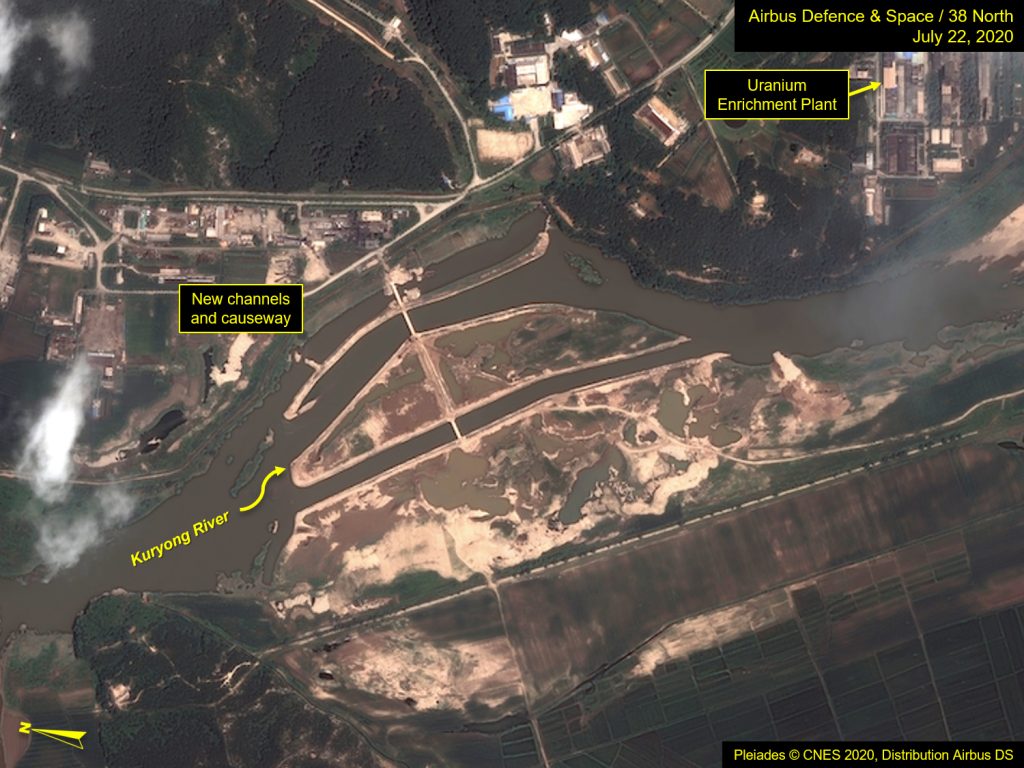 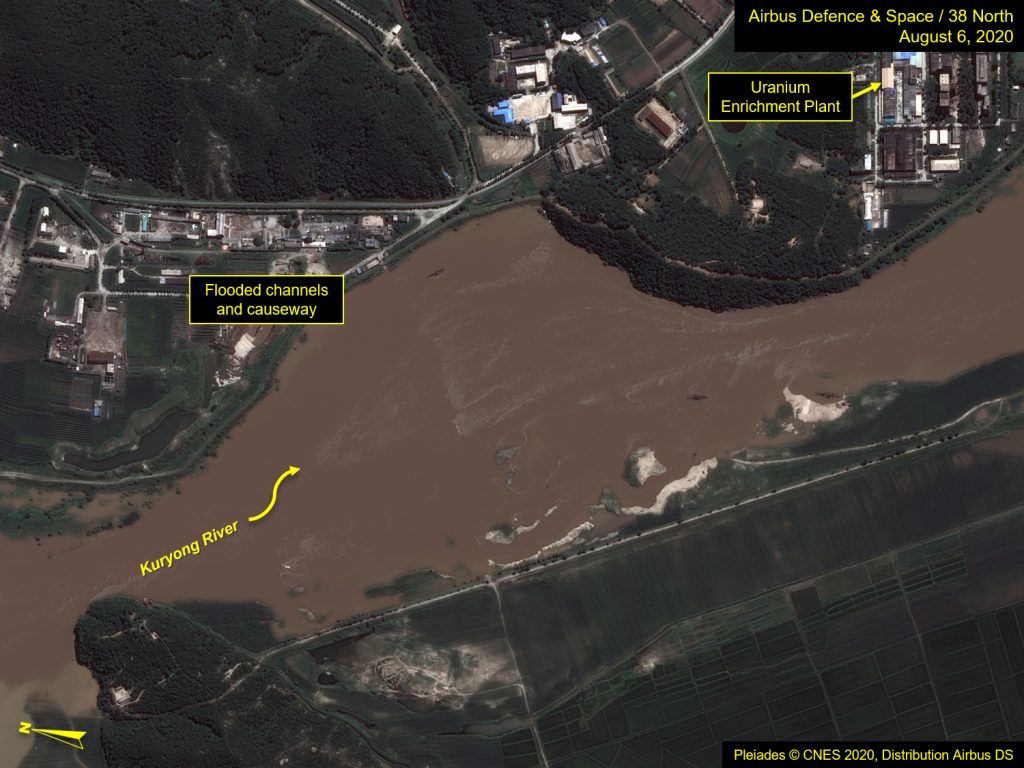