This two-part series discusses India’s ties to North and South Korea as well as strategies for further engagement with the two countries. This part focuses on the status and challenges of India-DPRK relations. Part two will address the evolving India-ROK relationship. 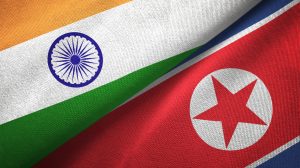 India’s ties with North Korea are a key aspect of New Delhi’s Act East Policy and the country’s post-Cold War outlook. Its decision two months ago to extend $1 million in humanitarian aid to North Korea underscores India’s commitment to maintain a dialogue with the North. Although this maturing engagement looks promising, it is unclear whether it can be sustained in the face of multiple challenges and the wide chasm between the reclusive authoritarian state, the Western world and the world’s largest democracy.

Unlike the Western countries who have barely had any diplomatic relations with North Korea, New Delhi has sustained ties with Pyongyang for over 47 years, largely reflecting the legacy of India’s commitment to the Non-Alignment Movement. India is one of only 25 countries in the world (which include Germany, Sweden, the UK, China, Russia and Pakistan to name a few) with an embassy in the North. The two countries have concluded multiple bilateral agreements and understandings in science, technology, cultural exchanges and information technology. India’s gesture in July of providing medicinal products, comprised chiefly of anti-tuberculosis medicines and carried out under the aegis of the World Health Organization, highlights India’s longstanding medical diplomacy with North Korea.

Instead of trying to exclude and isolate the frequently criticized North Korea, India has made active efforts to engage in “dialogue diplomacy” to establish peace and stability on the Korean Peninsula while hoping to act as a bridge between North Korea and the West. In May 2018, India’s Minister of State for External Affairs, General V.K. Singh (Retd.), visited Pyongyang at the DPRK’s invitation to mark 45 years of diplomatic ties. The much-lauded trip raised immense speculation about the prospects of New Delhi’s renewed interests in reviving relations. The trip was followed by a second meeting with the DPRK’s Foreign Minister Ri Yong Ho in August 2018 on the sidelines of the ASEAN Regional Forum in Singapore. Prior to Singh’s visit, India appointed a Foreign Service officer to North Korea, Atul Malhari Gotsurve, as the new ambassador. Recently, Gotsurve was featured prominently in North Korean news when he presented Kim Jong Un with a basket of flowers and a congratulatory note to mark the “Day of the Sun” (the birth anniversary of the country’s founder Kim II Sung), symbolizing continued strong bilateral ties.

New Delhi has often come to Pyongyang’s assistance in difficult times by providing food items, blankets, polythene sheets and medical supplies. Notably, New Delhi has responded to food shortages in North Korea caused by natural calamities over the past 20 years as well as the Ryongchon train blast of 2004.

Amidst the coronavirus pandemic’s devastating impact on the region’s population at large—including India—New Delhi has significantly accelerated its aid diplomacy in South Asia and the Indian Ocean region. Increased aid to North Korea could emerge as a critical aspect of this humanitarian outreach. Despite the DPRK’s stringent emergency measures, including strengthened border crackdowns, a nationwide lockdown and a declaration of a state of emergency, the country’s economic and health conditions are “reaching dangerously new low points,” particularly as the death rate from chronic illnesses is set to increase in 2020. Sources have also reported several outbreaks of the virus in the country. If the situation becomes alarmed or tensed, India’s engagement with North Korea could develop into one effective medium of communication to the advantage of important actors such as the United States and South Korea.

While it has been a controversial decision in some quarters, New Delhi accepted Pyongyang’s officials under the Indian Technical and Economic Cooperation Program (ITEC). The North has been a partner state since 1993 and has availed the grant to send representatives to India for professional training and participation in programs in English language, education planning, administration, and development as well as implementation and management of computer software applications. New Delhi has also, on occasion, approved North Korean diplomats in its Professional Course for Foreign Diplomats (PCFD) at India’s Foreign Service Institute. Since 2016, in response to global concerns that North Korean participation in space and satellite technology courses may have involved transferring knowledge that could be applied to the DPRK’s nuclear program, India severely limited these training activities. However, New Delhi can explore ways to continue engagement through PCFD programs, which would help it build ties with future North Korean diplomats.

India has, until recently, ranked as North Korea’s second-largest trading partner, although in terms of absolute trade value, it remained far below China. In 2016, India’s exports to and imports from the DPRK stood at $54.1 million and $65.9 million USD, respectively. However, amidst mounting tensions between North Korea and the US and South Korea, India brought its policies into line with the United Nation’s economic sanctions and halted all trade with North Korea in April 2017, with an exemption for essential food and medicine. As a result, in 2018, India’s exports fell to $31.3 million and imports to $4.17 million USD. A revival of healthy trade relations will not be easy against the backdrop of the DPRK’s nuclear weapon proliferation and the likely continuation of UN sanctions. Still, India’s ties with North Korea post-COVID-19 could see stronger trade relations under their food and medical trade links.

Challenges Ahead for Expanding India-DPRK Engagement

Deepening India’s involvement with North Korea in the areas described above might be easier said than done in the face of several glaring challenges and concerns for India:

One of the biggest hindrances towards deeper engagement lies in North Korea’s increasing commitment to its nuclear program. Despite maintaining diplomatic ties, India has repeatedly condemned the DPRK’s nuclear activities and articulated its concerns over the country’s belligerence. In several circumstances, this has translated to confiscation acts against North Korean ships and support of US activities to, for instance, counter a North Korean aircraft believed to be carrying advanced ballistic missile technology to Iran. Under Prime Minister Narendra Modi, India has adopted an even stronger stance (as evidenced by the 2017 trade ban) against the DPRK’s proliferation of nuclear weapons in South Asia.

India is increasingly treating North Korea’s weapons of mass destruction (WMD) program as a threat to Indian national security, giving it a greater stake in the North’s denuclearization and regional stability. However, North Korea will not abandon its nuclear weapons in the immediate future or its further development of longer-range ballistic missiles. Hence, it is unlikely India can exercise much leverage over North Korea, or emerge as an effective intermediary.

Even more worrying for India is North Korea’s swiftly rising relationship with Pakistan. Singh’s 2018 visit to Pyongyang highlighted New Delhi’s concerns regarding this matter. In response, the DPRK stressed that “as a friendly country,” North Korea would “never allow any action that would create concerns for India’s security.”

Despite such reassurances, there is a longstanding “illegitimate nuclear technological nexus” between Pyongyang and Islamabad, including Pakistan’s transfer of nuclear technology to the DPRK, that has always concerned India. (This nuclear trade has possibly taken place with the facilitation and approval of China, which is a critical ally for both partners.) The Pakistan-DPRK connection could become more robust as the North seeks to emulate Pakistan’s model rather than the Libyan example. Following India’s trade ban in 2017, Pakistan enhanced its trade volume with the DPRK and became one of its largest export destinations (exports in 2018 were valued at $7.05 million USD). New Delhi’s enhanced engagement could give Pyongyang an incentive to disentangle the Pakistan-DPRK nuclear connection.

India’s Ties with the US and South Korea

India has become increasingly proactive in pursuing the ambitious goal of expanding its influence in the Indo-Pacific region. It is also working to develop deeper linkages and political alignment with the US, Japan and South Korea in the face of China’s assertive nationalism and unilateral attempts to change the territorial status quo, from its border with India to its illegal claims in the South China Sea. At a time when US-DPRK ties are deeply strained (or at least not moving ahead before the new US president is elected), India’s special strategic partnerships with these three countries can make engagement with North Korea a challenging diplomatic maneuver. In fact, a gradual shift away from Pyongyang and an increasingly hardened stand against its missile tests might be more attractive for New Delhi as it looks towards becoming a critical alternative link to Beijing in the supply chain nexus emerging post-COVID-19.

Yet, New Delhi could try to position itself as a critical channel of communication with Pyongyang. This will admittedly not be easy—it is difficult to imagine any of the major players on the peninsula turning to India to play an intermediary role with the DPRK in the near future. However, as India rises and invariably emerges as a key Asian power, its aspirations to play a more influential mediating role among the key protagonists may become more realistic if New Delhi continues to expand its bilateral ties with Pyongyang, particularly in the fields of trade, investments, economic assistance and diplomatic exchanges. In fact, in 2017, India’s former Minister of External Affairs brought up this very point when then US Secretary of State Rex Tillerson broached the topic of India’s continued official presence in the DPRK. India conveyed the need for the presence of a Western-friendly state to facilitate necessary “mutual dialogue” to resolve issues. New Delhi’s relations with Pyongyang and its alignment with Washington and Seoul could be of possible use as they look to lower tensions with Pyongyang and make progress toward denuclearization. The extent to which India can carve out such a role for itself, however, would invariably depend on the North’s willingness to abandon, or at least pause, its WMD program—which seems unlikely at the moment.

With the post-COVID geopolitical order undergoing major changes and global economic conditions deteriorating, North Korea will want to focus on strengthening its already weak economy, especially if the country is hit hard by COVID-19. Furthermore, at some point, dialogue between North Korea, the United States, South Korea, Japan and other stakeholders on the Korean Peninsula will reopen; at that juncture, India would be poised to play a constructive role in promoting peace and security on the Korean Peninsula. Continuing India’s engagement with North Korean leadership will pay off in these foreseeable situations.