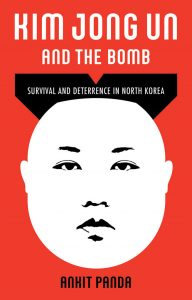 Tiring of being told “on the one hand…on the other hand,” US President Harry Truman once expressed his wish for a one-handed economist. A similar wish would be fulfilled by many strategic analysts in Washington today. Ankit Panda, a Stanton Senior Fellow at the Carnegie Endowment for International Peace, exemplifies that one-handedness in his new book, Kim Jong Un and the Bomb.

Panda’s analysis is unequivocal: Ever since the Korean War, the Kim dynasty has been determined to develop nuclear weapons and the intercontinental ballistic missiles (ICBMs) to deliver them against the United States and never intends to give them up. The North needs them to ensure the regime’s survival by deterring any attempt to attack or subvert it.

Panda’s assessment, widely shared around Washington, is plausible enough, but it ignores the counterevidence and airbrushes all the ambiguities out of the picture. Why did Pyongyang stop reprocessing plutonium in 1991—before it had any nuclear weapons—and not resume extracting nuclear fuel until 2003? Why in 1994 did it agree to verifiably shut down its functioning Yongbyon reactor and scrap two larger reactors then under construction in return for two less proliferation-prone reactors—reactors that would make it dependent for their operation on cooperation with the United States for years?[1] Why did it again disable its nuclear facilities at Yongbyon in 2008 even though its uranium enrichment efforts were not yet operational? Why did Kim Jong Un unilaterally halt tests of nuclear weapons and longer-range missiles in 2018—stopping short of demonstrating a proven miniaturized thermonuclear device and an ICBM to deliver it—and has yet to resume them? Without addressing such questions, how can anyone be so sure what Kim Jong Un wants?

Yet Panda makes no effort to address them. He pays only cursory attention to the details of negotiations between Pyongyang and Washington prior to the Trump administration, then provides a sketchy version of Trump’s nuclear diplomacy, all to underscore Kim’s unwillingness to disarm.[2] In an echo of John Bolton, he disparages the value of dismantling the Yongbyon reactor as “not the prize it might once have been” (276), ignoring the dismantlement of other plutonium, tritium, and highly enriched uranium (HEU) facilities at Yongbyon under discussion in the run-up to Hanoi. He claims, for instance, “The talks process ended in February 2019 in Hanoi with a North Korea walk-out and no deal” (22). It was Trump, of course, who abruptly departed.

Through it all, Panda misses the North’s emphasis on reaching a fundamental accommodation with the United States. He ignores the possibility that the DPRK wanted to hedge against China’s rise as well as reduce its political and economic security and dependence on Beijing by seeking an end to US enmity, and thereby an end to the US nuclear threat.

Nor does Panda ask how nuclear arming will deal with the regime’s economic insecurity. Instead, he implies that self-reliance would suffice, quoting Kim’s reaffirmation of economic orthodoxy after the Hanoi Summit failed to yield sanctions relief, commanding the party to “vigorously advance socialist construction by dint of self-supporting national economy.”[3] Panda notes slackening enforcement of sanctions by China and Russia and adds, “For now, it seemed, the regime could breathe easy—even if its people would continue to tighten their belts” (283). So much for regime survival.

Panda is much better at examining the details of the North’s weapons development. He has mined intelligence assessments and interviewed officials to come up with a primer on the North’s nuclear and missile history. Although he uncritically accepts what may be quantitative overestimates of its weapons, he does raise occasional doubts. For instance, he acknowledges that many of its missiles may not be indigenous but imported from Russia and modified with components from abroad and considerable tinkering in the North. Panda repeatedly asserts that the North has an ICBM “that has the ability to strike anywhere on the continental United States of America with a thermonuclear warhead” (2). Yet a rocket capable of reaching the lower 48 states is not an ICBM unless it has a flight-tested reentry vehicle, which he eventually acknowledges it does not yet possess.

He also lays out a sophisticated interpretation of what North Korea’s strategy of deterrence might be. To deter the buildup of an American expeditionary force, as deployed in the war against Iraq, Panda writes, “North Korea would have to convey a willingness to introduce nuclear weapons early and before any actual use of force against it by the United States and its allies.” But to “go first and go big” would have “terrifying consequences”: for Kim “to contemplate first use” would necessitate a “total crisis.” Panda imagines Kim’s calculus:

Even if my missiles are not destroyed [by Stealth fighters], enhanced American cyber and electronic warfare might sever me from my ability to command my nuclear forces. So I should ready my short-, medium-, and intermediate range ballistic missiles, mate them with nuclear warheads, and prioritize valuable targets (83).

While targeting Andersen Air Force Base on Guam, US headquarters at Yokosuka and the Terminal High Altitude Area Defense (THAAD) battery in Seongju County, South Korea, Kim would hold his ICBMs in reserve in hopes of deterring nuclear retaliation.

Panda recognizes the dangerous implications of this strategy for instability in an intense crisis. He also appreciates the limitations of US intelligence to pinpoint the location of all the mobile missiles in the North, which would be essential for a preemptive attack, as well as the shortcomings of US missile defenses. He fears that coexistence with a nuclear-armed North Korea may gradually erode South Korean and Japanese trust in the reliability of US deterrence, leading them to acquire nuclear forces of their own.

These considerations lead Panda to call for arms control negotiations with the DPRK to ease the perils of nuclear coexistence. Yet his one-handedness now traps him in a series of contradictions. “An arms control approach to North Korea need not cast aside the longer-term goal of total disarmament,” he concludes, which “has a vanishingly small probability of ever materializing” (303). That calls into question his repeated assertion that this goal is certainly unattainable. He embraces “a three-step cap-reduce-eliminate formula” (306):

The first objective might be to limit the production and supply of nuclear weapons fuel and warheads; from there, the focus might shift to limiting Kim’s expansive array of delivery systems for these bombs; then the United States could seize the remaining window in which indigenous launch and reentry technology is still developmental (307).

He ends with an astounding claim, “Make no mistake: such an approach would restructure nearly three decades of U.S. policy toward Pyongyang from the ground up” (306). A closer reading of the negotiating history would have avoided such an inaccuracy.

What’s in this for Kim Jong Un? The one-handed approach leaves Panda no rationale for Kim to acquiesce. Panda sees sanctions relief as a sufficient inducement for the first objective. That ignores the North’s longstanding desire for a fundamental change in what it calls the “US hostile policy,” which would start with a scaling down of joint exercises, a peace process in Korea beginning with an end-of-war declaration and ending with a formal treaty, and full diplomatic relations, perhaps with an exchange of liaison offices as a first step.

There is much merit in Panda’s work but he could use another hand.