This article is the first of two examining the ability of the Korean Air and Missile Defense system (KAMD) to counter Kim Jong Un’s newest short-range ballistic missiles, the KN-23 and KN-24. This initial assessment examines whether Pyongyang’s aero-ballistic missiles[1] can evade detection[2] and tracking by flying under the radar. The technical analysis indicates that these low-flying systems degrade the efficiency of both the Patriot and Terminal High Altitude Area Defense (THAAD) systems, but remain vulnerable to interception. As a result, the South’s two ground-based missile defense systems retain significant capacity to protect key assets and capabilities.

The rapid pace of nuclear and ballistic missile testing by North Korea under Kim Jong Un, beginning in 2012, significantly heightened South Korea’s threat perceptions. Faced with an imminent and existential threat from the North, Seoul quickly established a “three-axis” strategy to deter Pyongyang’s use of nuclear-armed ballistic missiles, and, should deterrence fail, minimize their damaging effects. In 2006, the ROK Ministry of Defense unveiled KAMD, which is founded on indigenously developed and imported systems that detect, track and intercept ballistic missiles launched by North Korea.[3] Initially, the system was enabled by 48 previously owned Patriot PAC-2 interceptors acquired from Germany in 2008, though ultimately South Korea would field 300. Seoul upgraded its capabilities in 2014 when it purchased 136 Patriot PAC-3 interceptors. In 2009, the South announced it would purchase two Green Pine Block-B radars from Israel, which are believed to be capable of detecting and tracking targets at distances of up to 800 km, though it is unclear if this range estimate refers to missiles or their much smaller, harder-to-detect warheads.

The ROK is continuing its effort to develop indigenously its own missile defense system, the M-SAM, whose overall capabilities are like those of the Patriot PAC-3. The South also has a longer-range missile defense system—the L-SAM— under development. When operationalized, L-SAM will provide a layered defense network capable of greater efficiencies than a single-tier defense architecture.

The KAMD is supplemented by eight Patriot PAC-3 batteries deployed with US Forces Korea (USFK) to protect military capabilities. In 2017, Seoul accepted Washington’s offer to deploy and operate a single THAAD unit on the Korean Peninsula to provide wide-area, upper-tier defense when coupled with the PAC-3 point defenses. THAAD is netted into the US-operated PAC-3 batteries stationed in South Korea but is not integrated with the ROK-operated Patriot batteries. In addition to the ground-based missile defenses, the ROK and US operate sea-based platforms equipped with radars capable of detecting and tracking aircraft and missile threats. They are also armed with ship-based interceptors.

In 2019, North Korea began flight testing two new short-range ballistic missiles, designated by US intelligence as the KN-23 and KN-24. Unlike Pyongyang’s Scud- and Nodong-based missiles, which typically fly on trajectories reaching peak altitudes of about one-fourth the total range, the KN-23 and KN-24 travel to their targets on flight routes that never exceed roughly 50 km in elevation, despite reaching ranges of 600 km or more. The air at altitudes below 50 km is dense enough to enable the aerodynamic surfaces (fins) positioned at the aft end of the two systems to steer the missile over its full trajectory, including the terminal phase. If equipped with advanced inertial navigation units, aided by satellite navigation receivers, aero-ballistic missiles like the KN-23 and KN-24 can achieve great accuracies, making them militarily valuable when armed with only conventional, high-explosive warheads.

In addition to enhancing military utility through increased precision, the flattened trajectories employed by aero-ballistic missiles, according to some analysts, “allow [the missiles] to evade detection from Seoul, which relies on ground- and sea-based sensors to track North Korean missile launches.”[4] Such claims rest on the assumption that by flying below 50 km, ground-based radars cannot detect, let alone track aero-ballistic missiles early in their flight toward a target. Delays in detection and tracking decrease the defense’s battlespace (i.e., the time needed to track threats, develop and transmit fire-control solutions to the interceptors launched to destroy the incoming threat), resulting in smaller defended-area footprints, a key measure of defense effectiveness. In other words, if these claims are based on an accurate assessment of current USFK and ROK capabilities, the new North Korean missiles would significantly compromise missile defense effectiveness relative to Pyongyang’s older, liquid-fuel systems that fly on standard trajectories.

Modern missile defense systems rely on phased-array radars to detect and track threats. Unlike a conventional radar that tracks targets by mechanically turning its bowl-shaped antenna—and its main beam of radio waves—to scan the horizon a full 360 degrees with each revolution, a phased-array radar steers its main electromagnetic beam by manipulating the signals generated by hundreds, if not thousands of individual elements mounted on an antenna’s flat and stationary surface, as shown in Figure 1. This allows the phased-array system to nearly instantaneously scan the main beam up and down and side to side to create a large “fan” of coverage. Figure 2 depicts the radar fan—in a red-colored grid pattern—for the AN/TPY-2 radar placed in the ROK. The TPY-2’s detection range is determined by the size and reflective qualities of the target at the electromagnetic wavelength generated by the radar. (The size and reflectivity of an object are defined as its radar cross section, or RCS, and is expressed in square meters.) For this depiction, the target of interest has an RCS of one square meter, which is a typical value for a missile flying toward the radar. 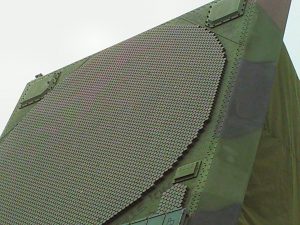 Figure 1. Patriot (left) missile-defense batteries rely on a passive electronically scanned array (PESA) of tiny elements uniformly distributed on the radar’s flat face. The radar’s antenna elements are powered by a single transmitter (TX) and steered left to right, and up and down by appropriately phase shifting the signal emitted by each of the individual elements to produce a wavefront traveling in the direction of the blue arrow. The radar’s boresight points in a fixed direction perpendicular to the antenna face, as denoted by the dashed, blue line. The maximum steering angle, theta, is governed by the number of elements and their separation distance in the vertical and horizontal planes. A newer technology, known as active electronically scanned arrays (AESA), is employed by THAAD’s AN/TPY-2 radar. The individual antenna elements of an AESA radar have their own independent transmitter, which is controlled by a central computer.

Figure 3 shows the TPY-2 radar’s fan from the side rather than from overhead, as in Figure 2. From this view, it is readily apparent that the earth’s curvature blocks line-of-sight detection of distant, low-elevation objects. (The elevation below which the radar cannot see an object at a given range is termed the “minimum detection altitude.”) If the radar is situated about 250 km from the aero-ballistic missile’s notional launch location, as shown in Figure 3, the KN-23 missile can, in principle, be detected roughly 12 seconds after launch, at an altitude of approximately 3 km. In other words, the KN-23 spends only its initial 12 seconds “flying under the radar.”

Figure 4 offers a simpler, clearer view of the radar’s minimum detection altitude as a function of range. Included in the depiction are the notional tracks of the KN-23 and Hwasong-5 (R-17, Scud–B) missiles during their respective boost-phases, marked at one-second intervals. The missiles are launched from two different sites, relative to the TPY-2 radar’s position. One is 250 km in front of the radar, as was the case in Figure 3, and the other is at 500 km. As shown, the TPY-2, or equivalent radar, detects and begins to track the KN-23 and Hwasong-5 missiles during their respective boost phases and at approximately the same altitude and an equivalent distance from the sensor, despite the “blind spot” created by the earth’s curvature. Figure 4 also reveals that the detection altitude for a KN-23 and Hwasong-5 fired from a site 250 km from the radar is significantly lower than that of either missile launched 500 km away. The operational depiction shows that the KN-23 offers no discernable advantage over the Hwasong-5 when it comes to early detection by ground-based missile defense radars when launched from the same location.[5]

Early detection and tracking of a missile launch by long-range radars not only enhances the performance of terminal missile defenses that enable KAMD, but also provides the real-time data needed to calculate a missile’s launch location—information that can be used to assist airborne strike forces designed to attrite North Korean missile launchers and crews, if not pre-empt future missile launches.

KAMD is founded on Patriot and M-SAM systems that provide point defense against short- and medium-range missiles. Both systems rely on fire-control radars that detect and track missiles in flight at a range of about 100 km, perhaps more if the target has a large radar cross section. The earlier the fire-control radar sees the threat, the sooner the system can develop a fire-control solution and launch its interceptor, which in turn maximizes the amount of territory that can be protected. Early detection of a threat missile by long-range radars, such as THAAD’s AN/TPY-2 or South Korea’s Green Pine radar, can be used to cue Patriot’s (or M-SAM’s) fire-control radar to focus its transmitted beam on a limited portion of the sky, where the threat is expected to appear, rather than having to scan continuously the entire horizon. A focused search allows the fire-control radar to pick up and track the threat sooner than would otherwise be possible. In an engagement where a second or two can make the difference between a successful interception and a missed opportunity, cueing fire-control radars is critical.

As the analysis above indicates, North Korea’s KN-23 and KN-24 missiles are no better at evading detection by long-range radars than their Scud-type counterparts. Therefore, aero-ballistic missiles are just as vulnerable to early targeting by KAMD and Kill Chain as the Hwasong-5 and similar systems. However, the newer missiles can maneuver throughout their entire trajectory. The potential impact maneuverability has on the interception process will be the subject of a forthcoming article on 38 North.