In September, Typhoon Maysak caused significant damage in the mining region in the Komdok area of South Hamgyong Province, an area of growing priority in North Korea. In his site visit to the area in October, Kim Jong Un indicated that the post-typhoon rebuilding and recovery of the Komdok area was just the first stage in transforming it into a “model mountainous city and a mining city,” and that further plans would be announced at the Eighth Party Congress planned for January. He stressed the need for “all-out efforts” to complete the repairs during the current 80-day campaign (to boost production and bolster unity) and pledged to “take charge of the project himself” to advance his vision for the area.[1]

Ground and satellite imagery reflect the massive efforts being employed and rapid construction progress being made throughout the Komdok area. While reconstruction efforts so far appear largely successful, it will be imperative to complete repairs to the single roadway into the area before winter to ensure a route for mining trucks to carry ore to the port city of Tanchon.

Background: Flooding and the Recovery Response

On September 3, Typhoon Maysak hit the eastern part of North Korea, causing catastrophic damage—in the form of floods and landslides—especially to the sprawling mining areas around Komdok. North Korea’s party newspaper, Rodong Sinmum, reported that some 2,000 households, 59 bridges, 60 kilometers of roads and several kilometers of roadbeds and railways were destroyed.[2] As a result, the total railway and road transport network in the narrow valley was paralyzed.

Mineral mining is an essential and critical part of the North Korean economy, providing a needed source of hard currency. As such, Kim Jong Un convened an emergency meeting of the Workers’ Party Central Military Commission on September 8 to discuss a storm recovery plan. He ordered that “state emergency measures” be taken to restore homes and the road network within a few days and that all damage be repaired by the end of the year. As a result of this call to action, state media reported that 300,000 party members in Pyongyang volunteered to assist reconstruction efforts in North and South Hamgyong Provinces.[3]

By October 13, the railway was repaired sufficiently for Kim Jong Un to travel to the Komdok area by train and inspect reconstruction progress. State media reported that workers had already built more than 60 percent of the 2,300 new dwellings planned for the area.[4]

The railway had been sufficiently repaired by October 13 to enable Kim Jong Un to reach Komdok in his special train. However, despite early reports of “makeshift road construction” work starting in September, severe damage to roadways in the area remained on November 2 imagery.[5] In order for the mining trucks to travel south to the port city of Tanchon, heavy earth-moving equipment was used to carve a temporary winding road along the Puktae-chon riverbed.

One section of road remained completely collapsed onto the riverbed below in November. While a detour has been constructed around this area, it is too sharp and steep for mining trucks to manage. Instead, a mining truck can be seen traveling along the makeshift road near the riverbed. Fixing that road segment will take considerable time requiring the construction of a bridge span across the gap. 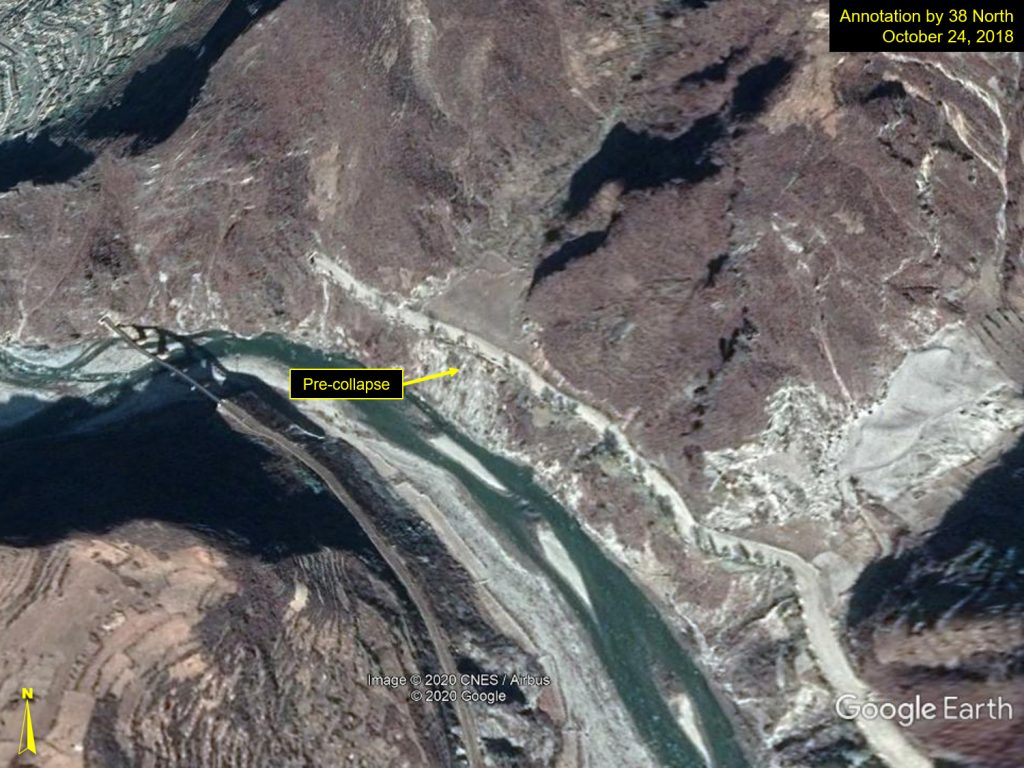 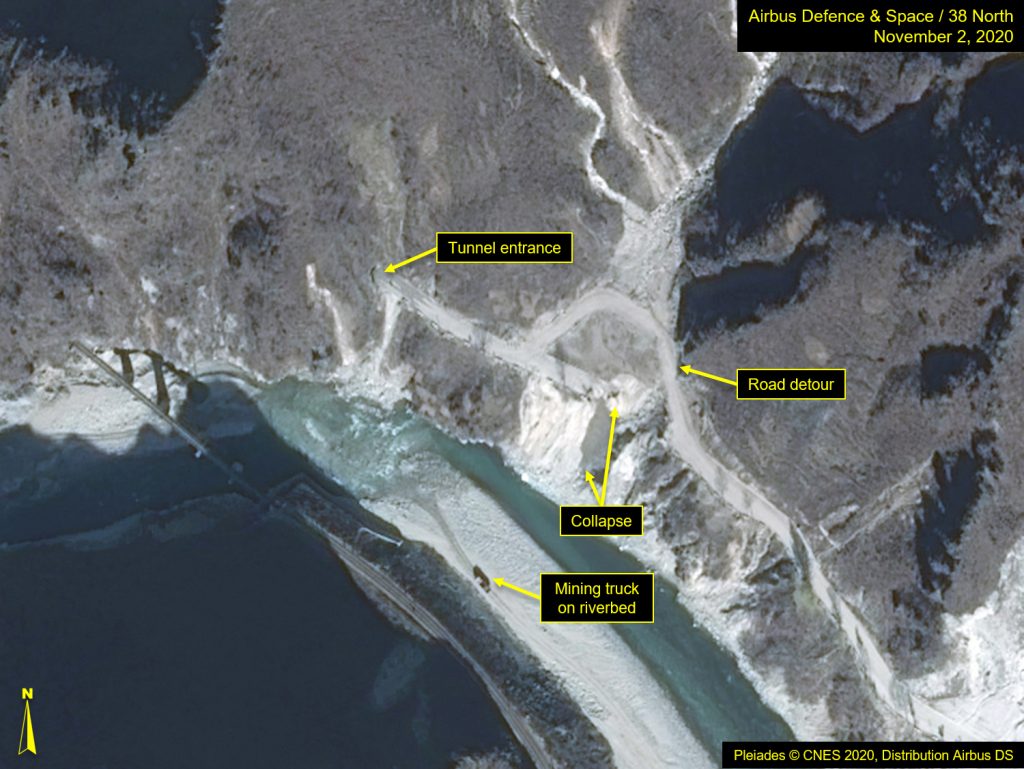 Next to the Ryongyang Magnesia Clinker Branch Factory, housing construction nears completion. Roofing tiles were installed between October 13 and November 2, and large numbers of workers are still observed on site. It is likely that a dike will be built along the Puktae-chon to shield against future high water and flooding.

In a flat area next to the Komdok Number 3 Processing Plant, which processes refined ore from the Ryongyang Magnesia Clinker Branch Factory, there is a rectangular array of approximately 90 closely spaced dwelling units, nearing completion, with roofing tiles also installed by November 2.

Figure 5. New dwelling units next to Komdok Number 3 Processing Plant near completion.
Note: Hover over slideshow and click on left/right arrows to navigate.

Across the Puktae-chon, there are two housing units under construction that appear capable of supporting 48 households. The roof appears to be complete in the November 2 image.

Figure 6. New housing units across the Puktae-chon.
Note: Hover over slideshow and click on left/right arrows to navigate.