Since Kim Jong Un came to power, he has reinvigorated reforestation efforts.[1] While examining the change of land use/cover for twenty years using remote sensing data, this study found that the forest area in North Korea has been rebounding since 2015. Commercial satellite imagery has confirmed that reforestation of barren hillside slopes is evident in some areas, especially around Pyongyang and in South Pyongan Province. However, there are also signs of continued deforestation in areas around remote villages, calling into question the sustainability of reforestation efforts without addressing the use of wood as low-cost household fuel.

Commercial satellite imagery of land-use/cover changes in North Korea over the past decades indicates that forest areas have begun to increase in recent years (Chung 2020). Low- to medium-resolution satellite images were used to examine the recent forest changes and track the areas where forests have improved and then compared against high-resolution imagery to verify findings.

Additional data from 2001 to 2019 indicated that forests declined by -0.8 percent annually from 2001 until 2015. They began to increase slightly thereafter, rebounding by about 0.2 percent each subsequent year (Figure 2), mainly at the foot of mountains and in intermontane areas.

Google Earth imagery was then used to compare select reforested or revegetated areas before and after 2015.

In Figure 3, a denuded slope field with both cultivated and barren land in 2015 shows traces of reforested and vegetative cover in several places by 2019.

Figure 3. Reforested patch fields on a slope in Yangjin-mal, Pyongyang. 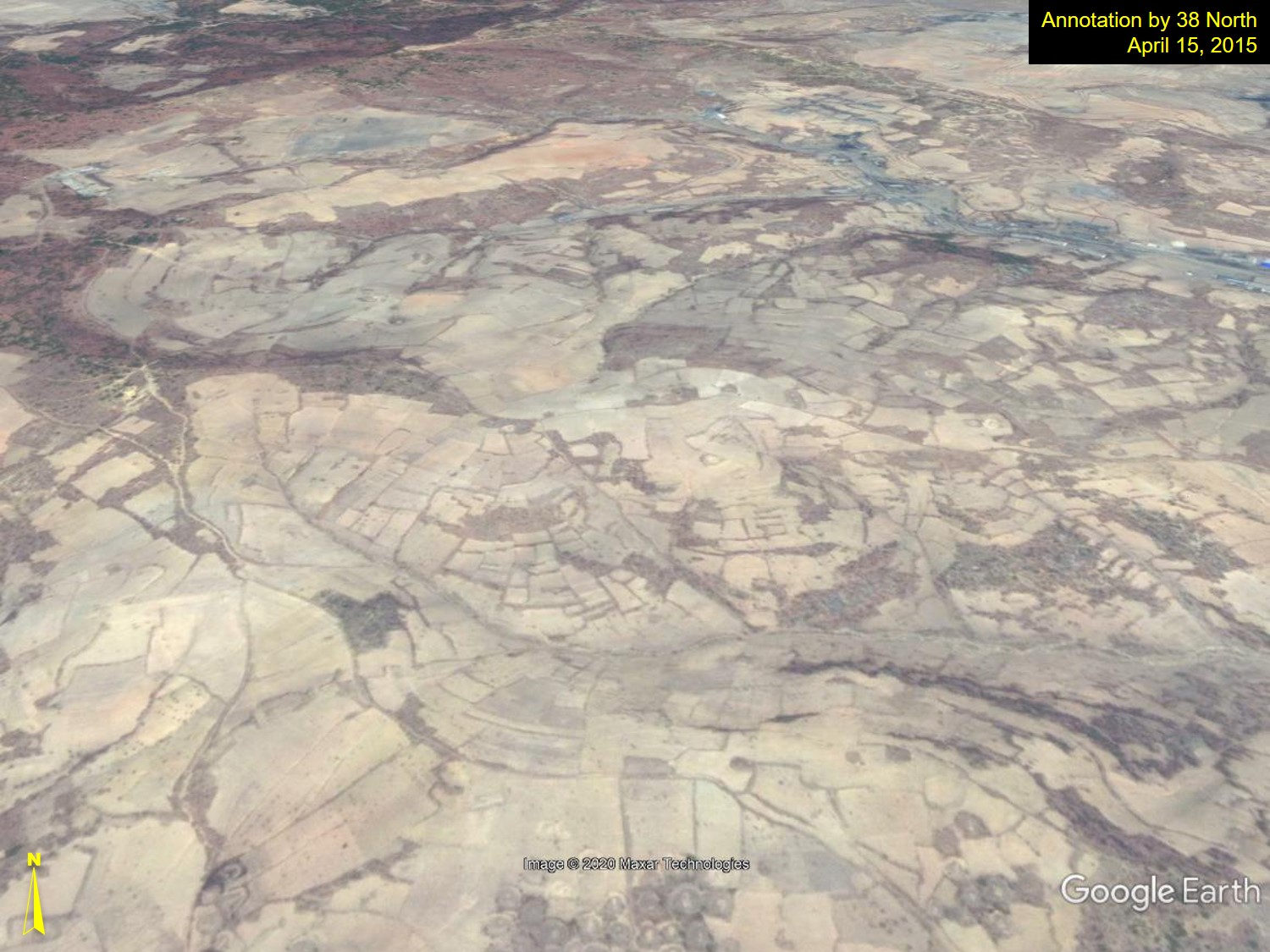 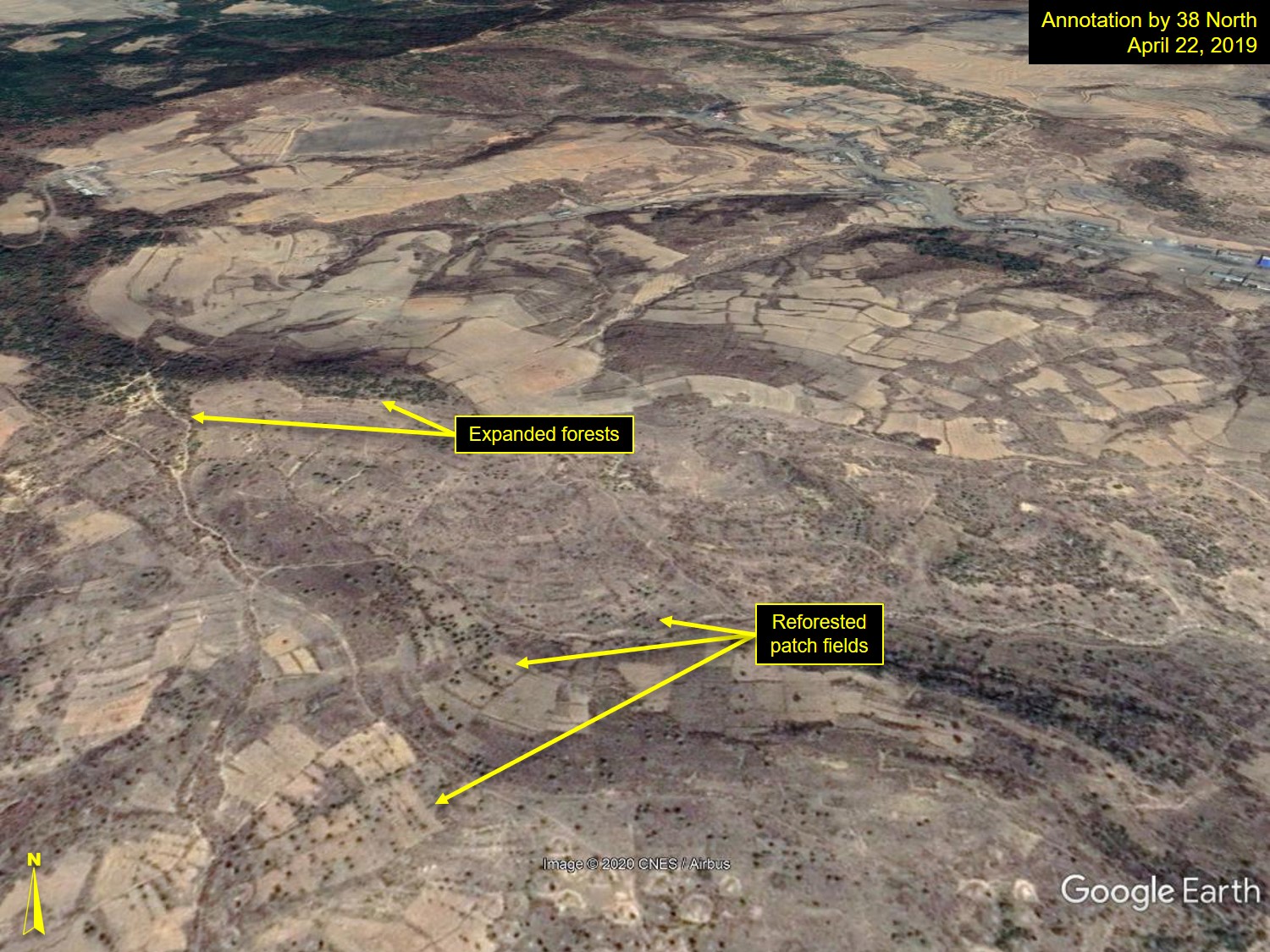 Figures 4-7 are representative of several hill slopes that were barren in 2014, which were reforested and vegetated by 2019. 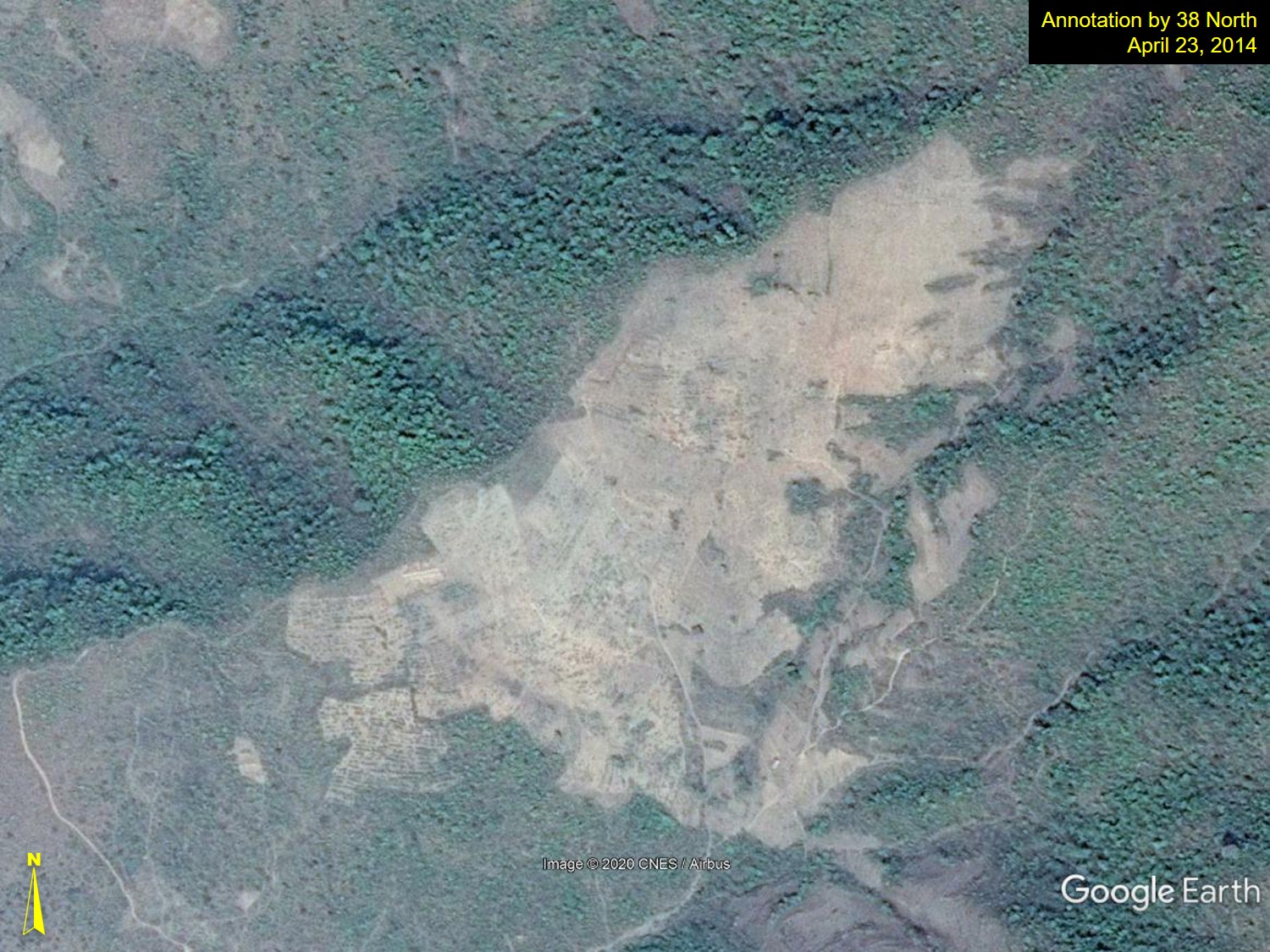 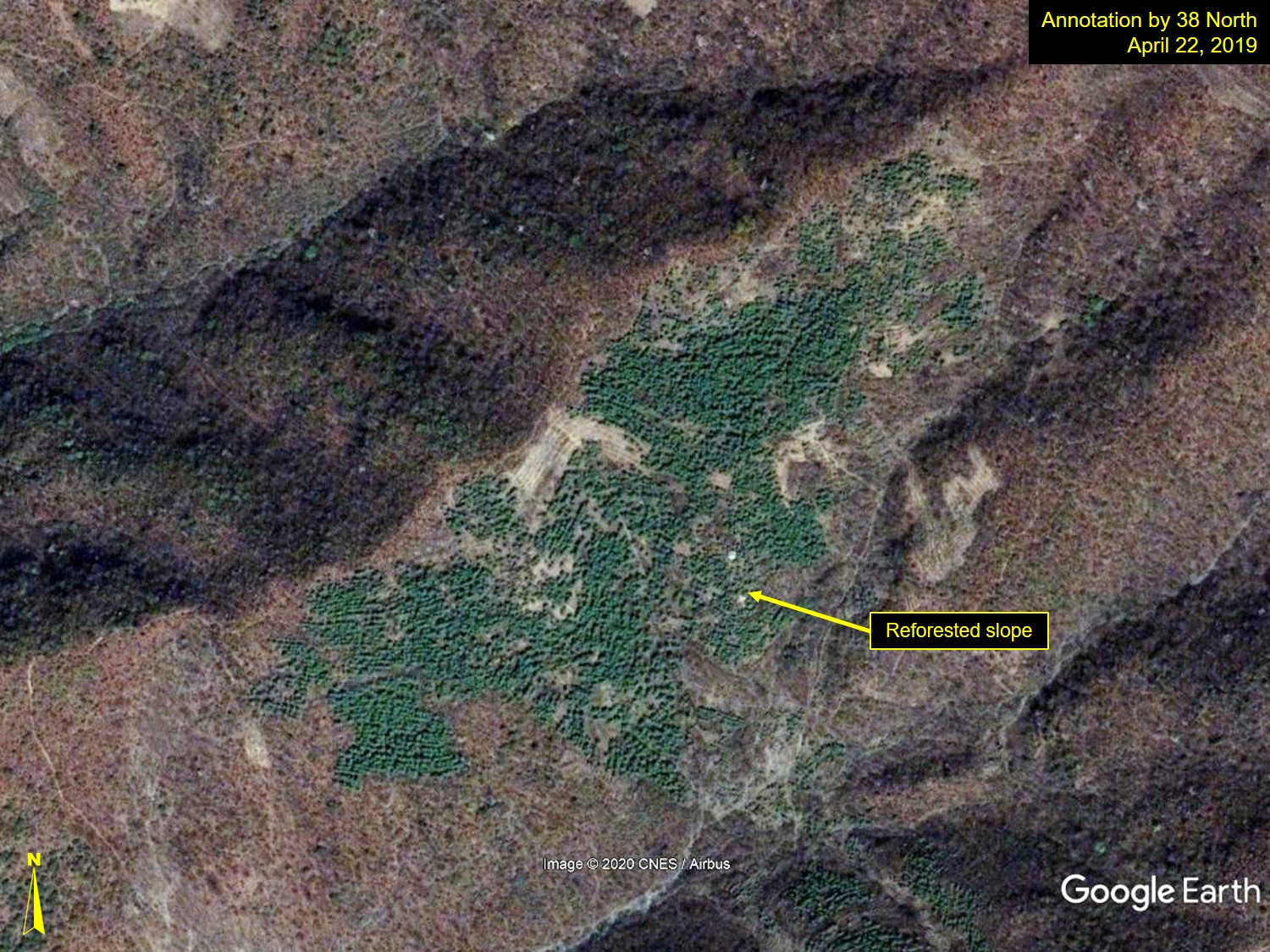 Figure 5. A reforested and revegetated slope in Hwagang-ri, Pyongyang. 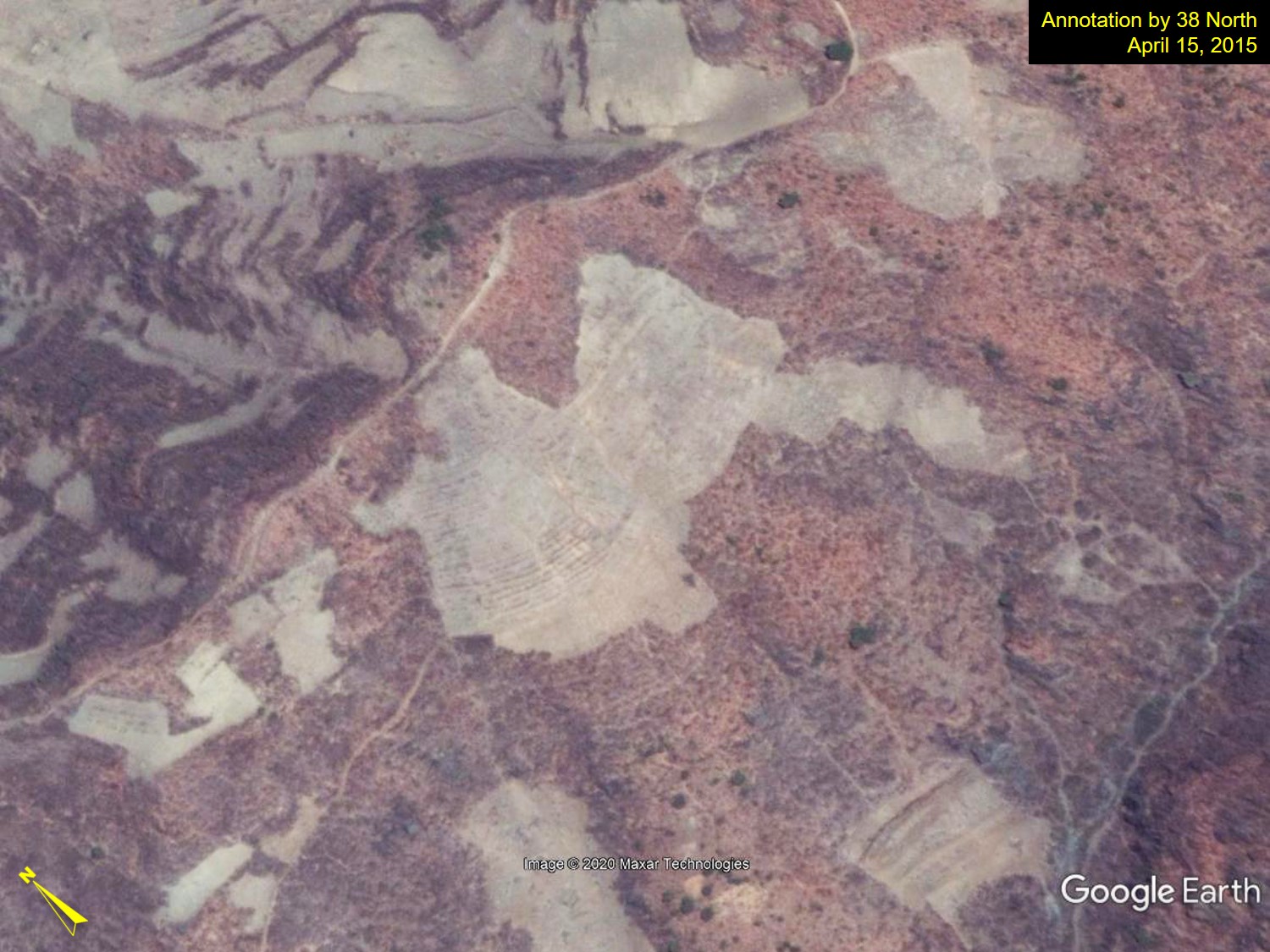 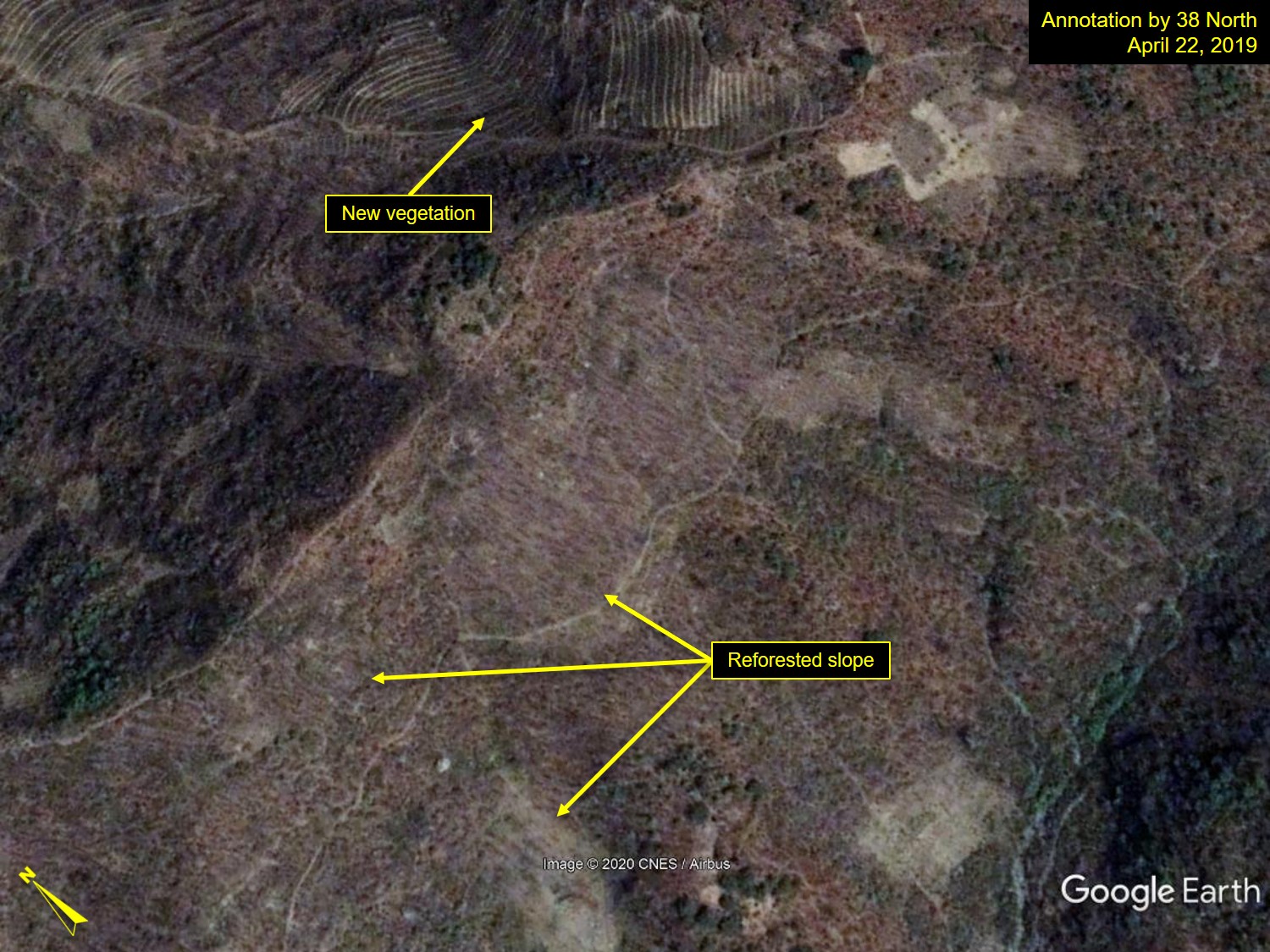 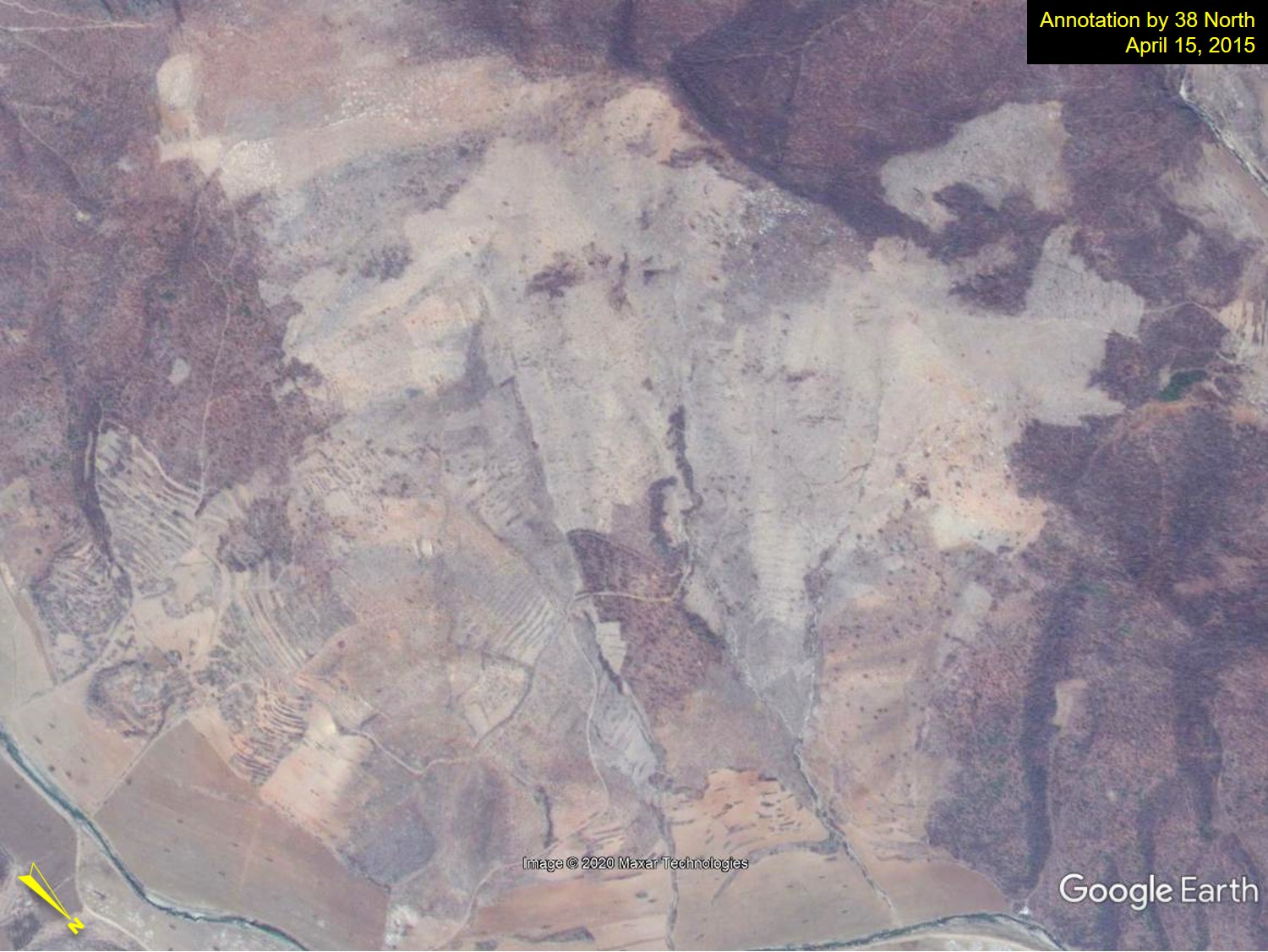 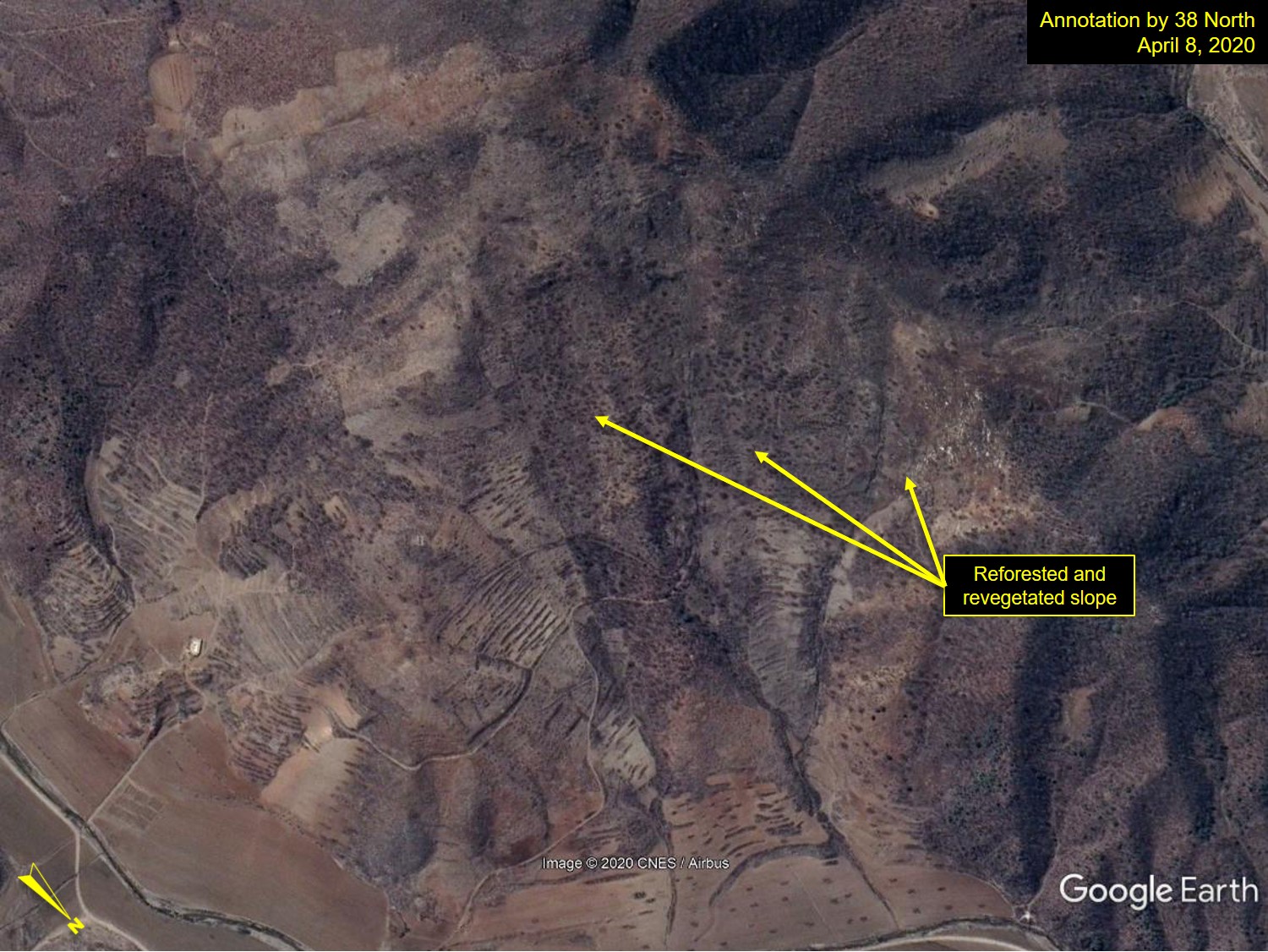 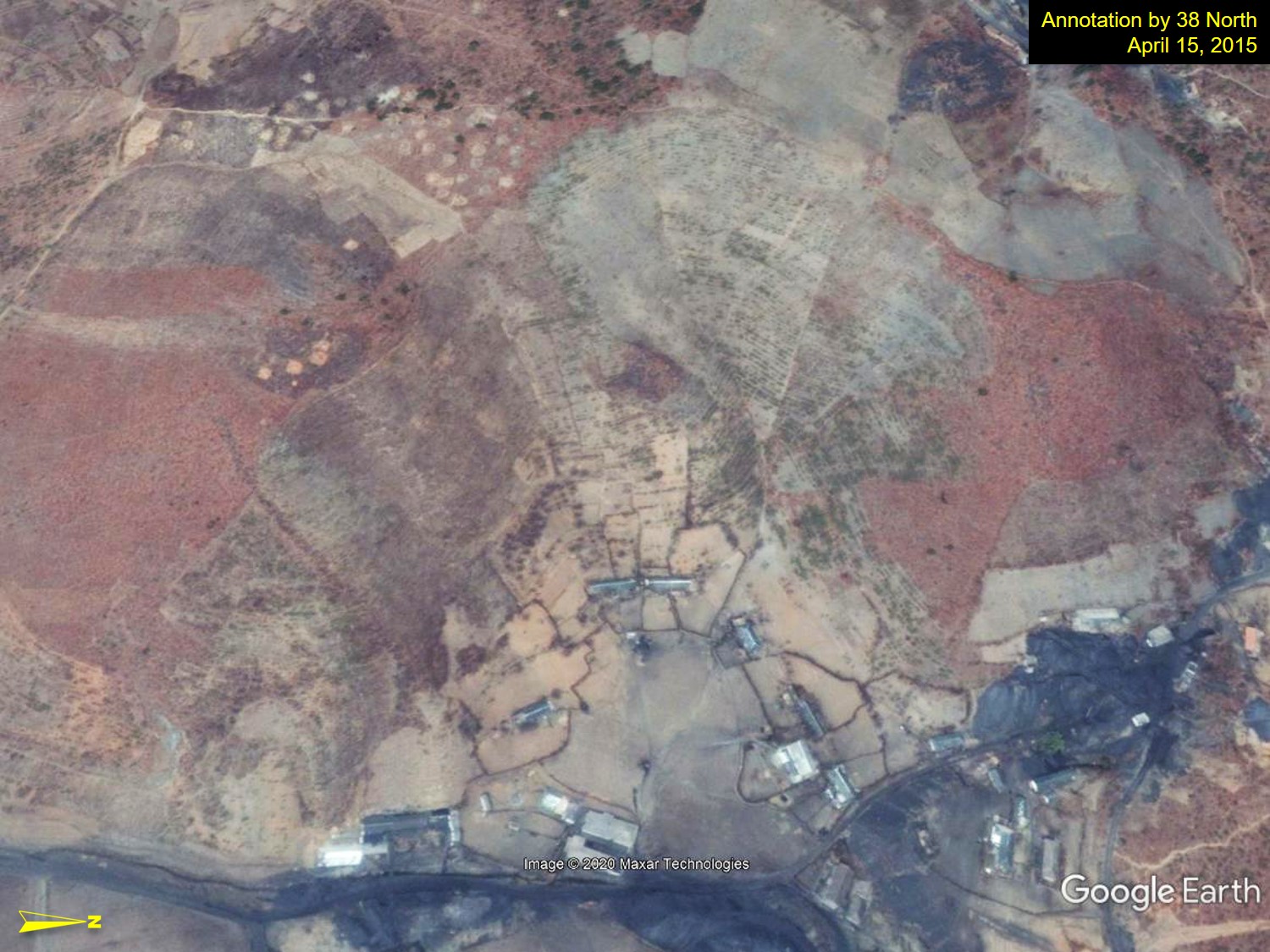 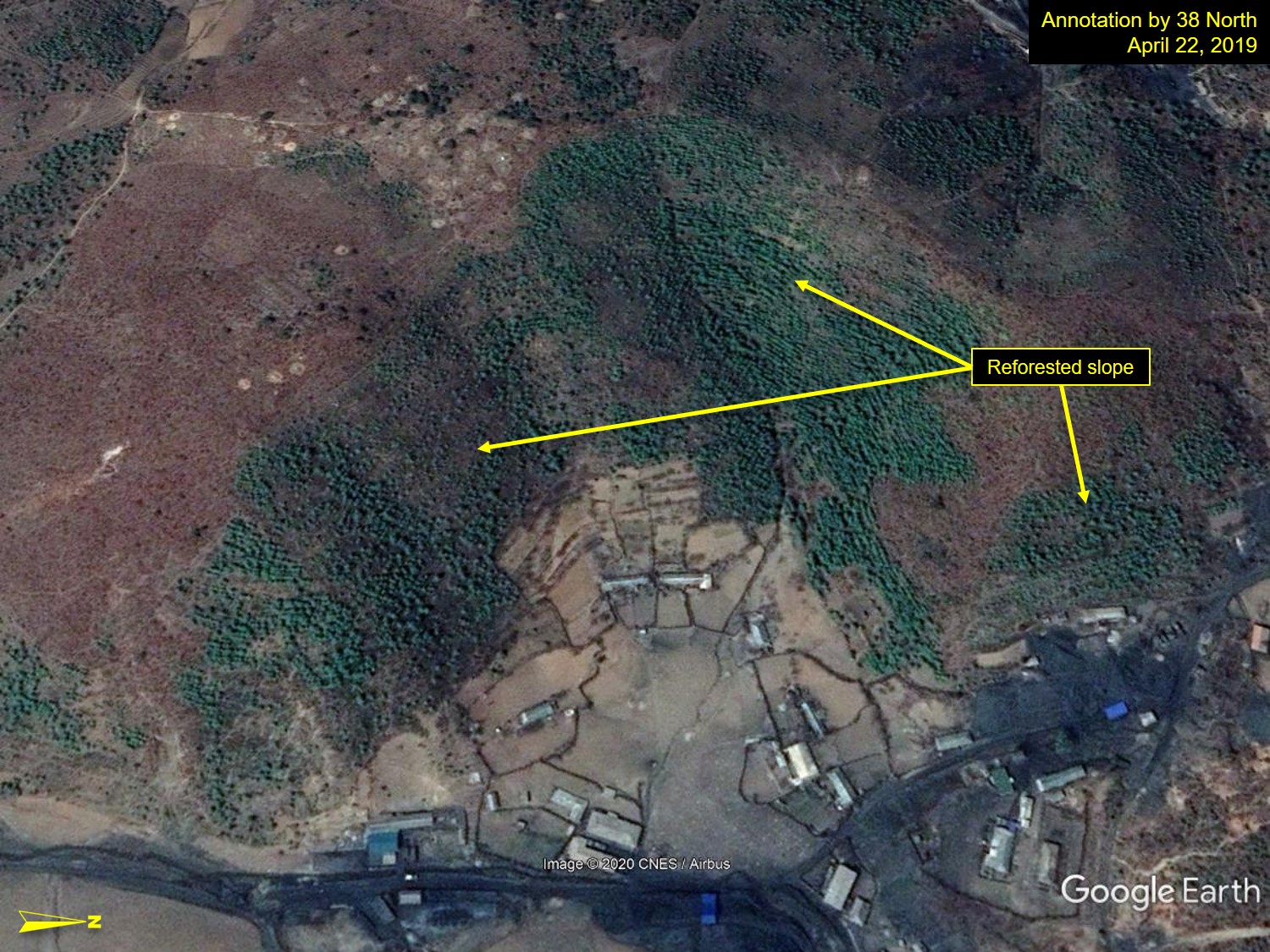 In particular, in Figure 8, a large-scale coniferous forest was created on a barren slope, forming a dense colony. 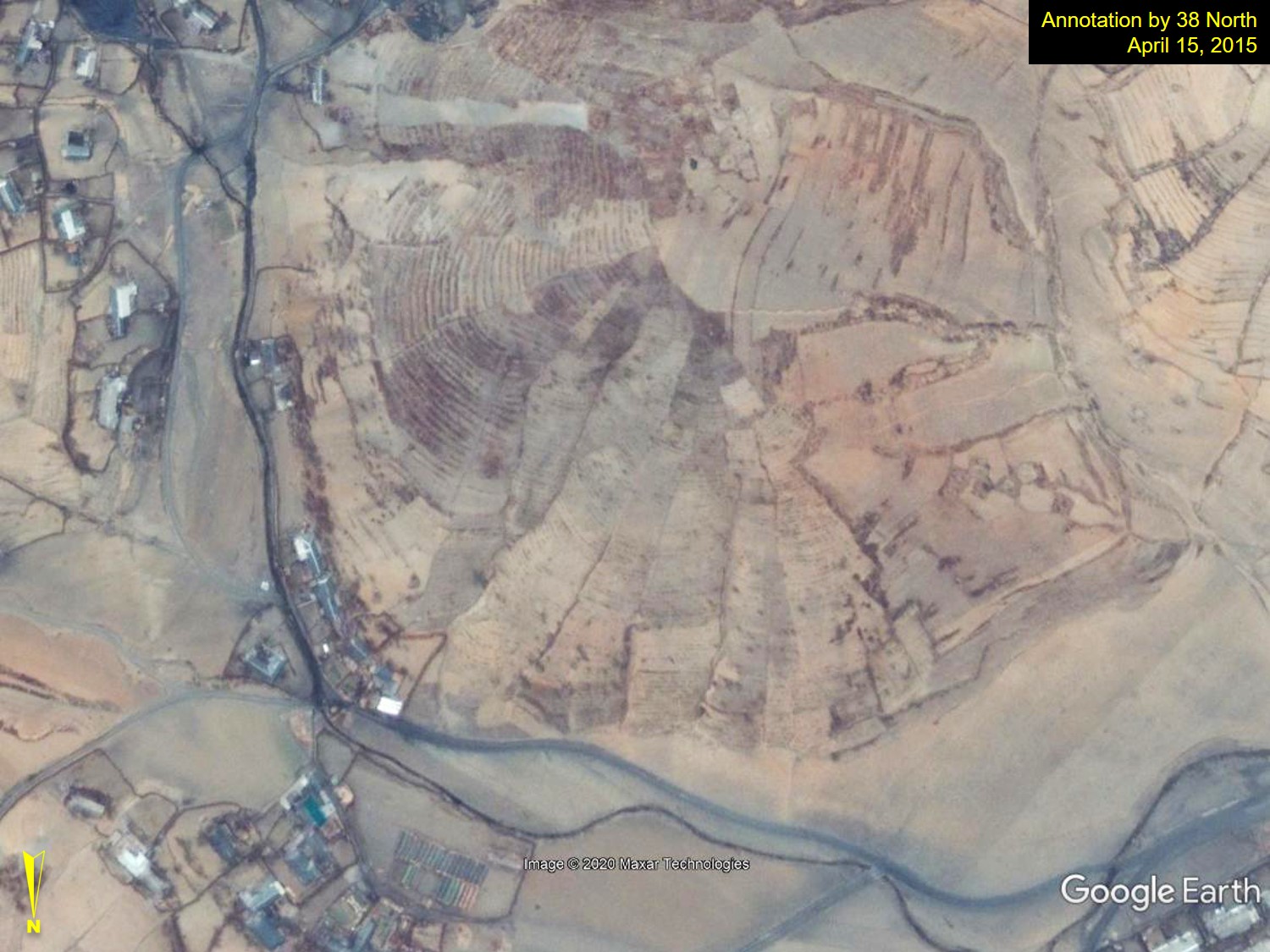 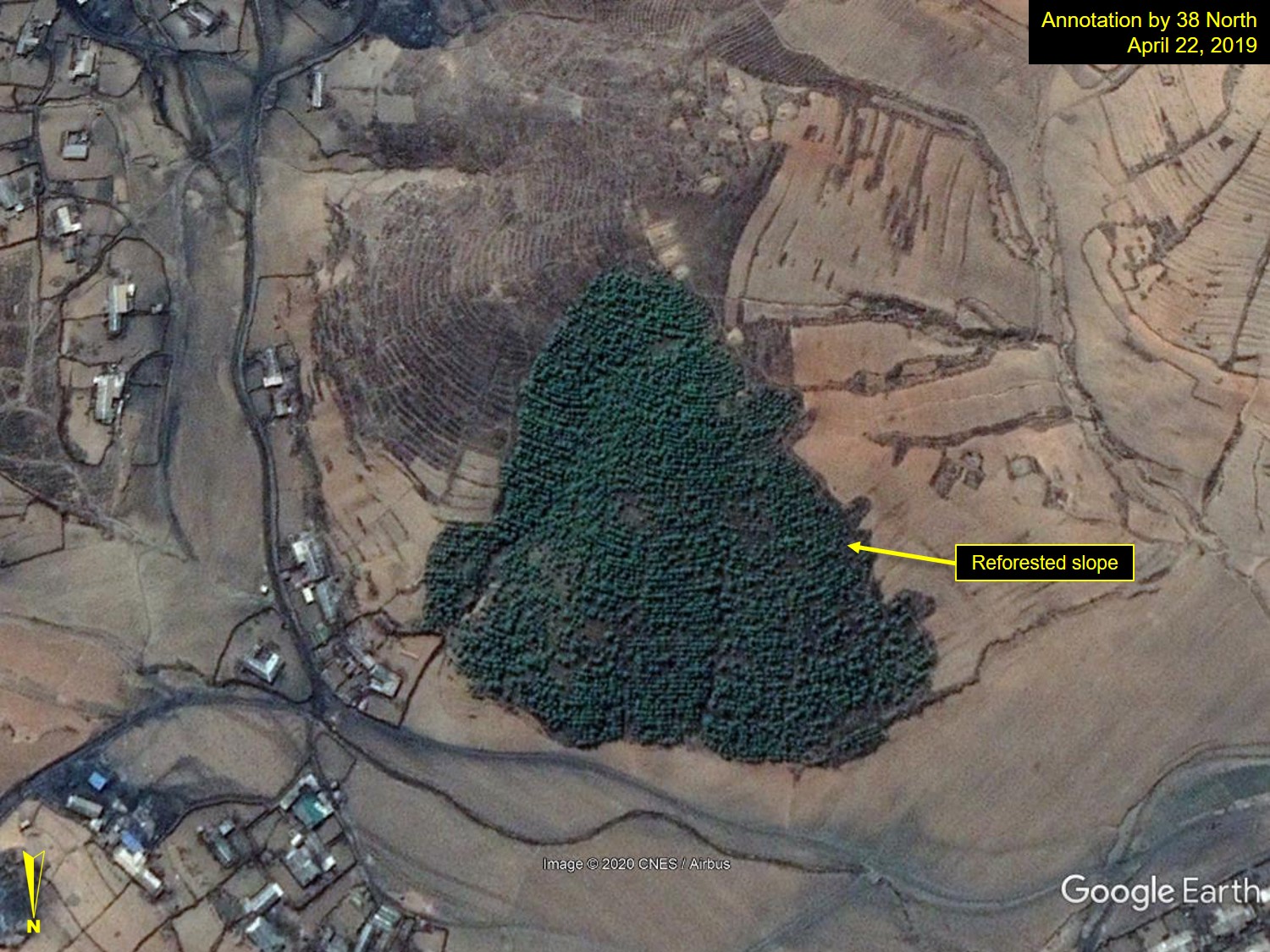 In Figure 9, patch fields have been largely reforested by 2020. 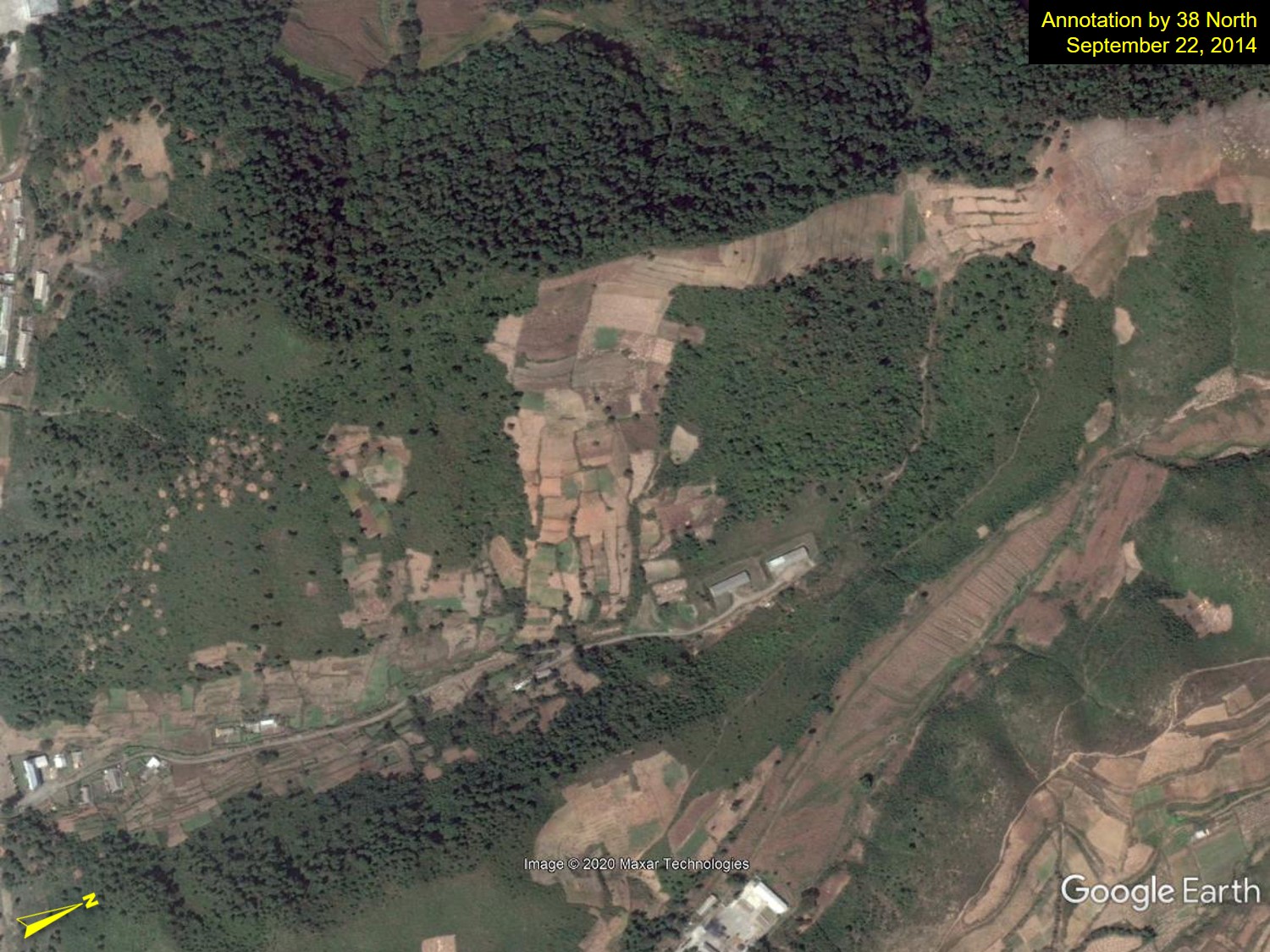 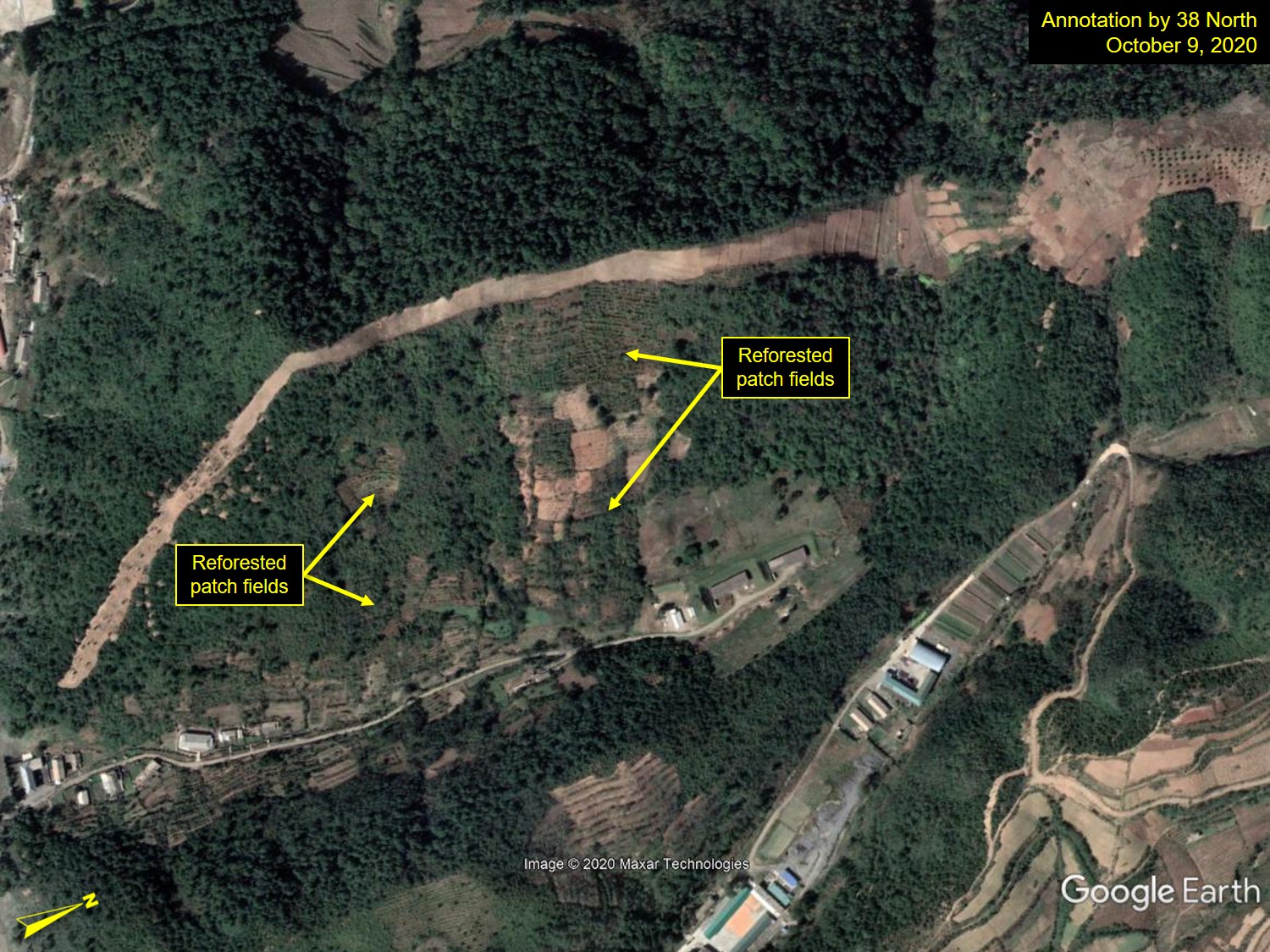 At the same time, deforested areas can still be seen throughout the country, usually in remote mountain foothills close to the rural villages. Figure 10, for instance, shows a forested slope where trees were widely removed in recent years. In this particular case, small mounds observed in the imagery suggest this is probably a mountainside graveyard area. 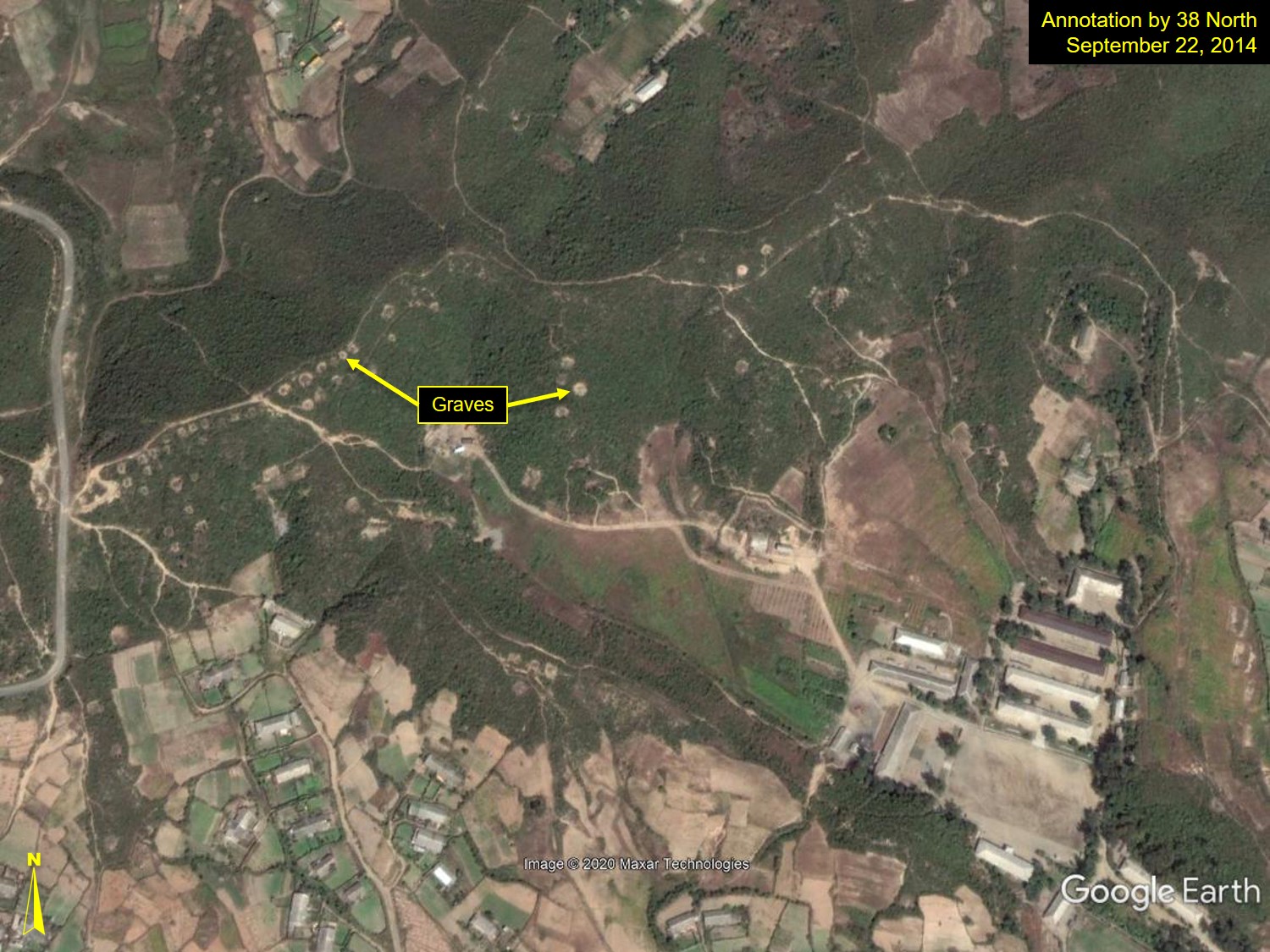 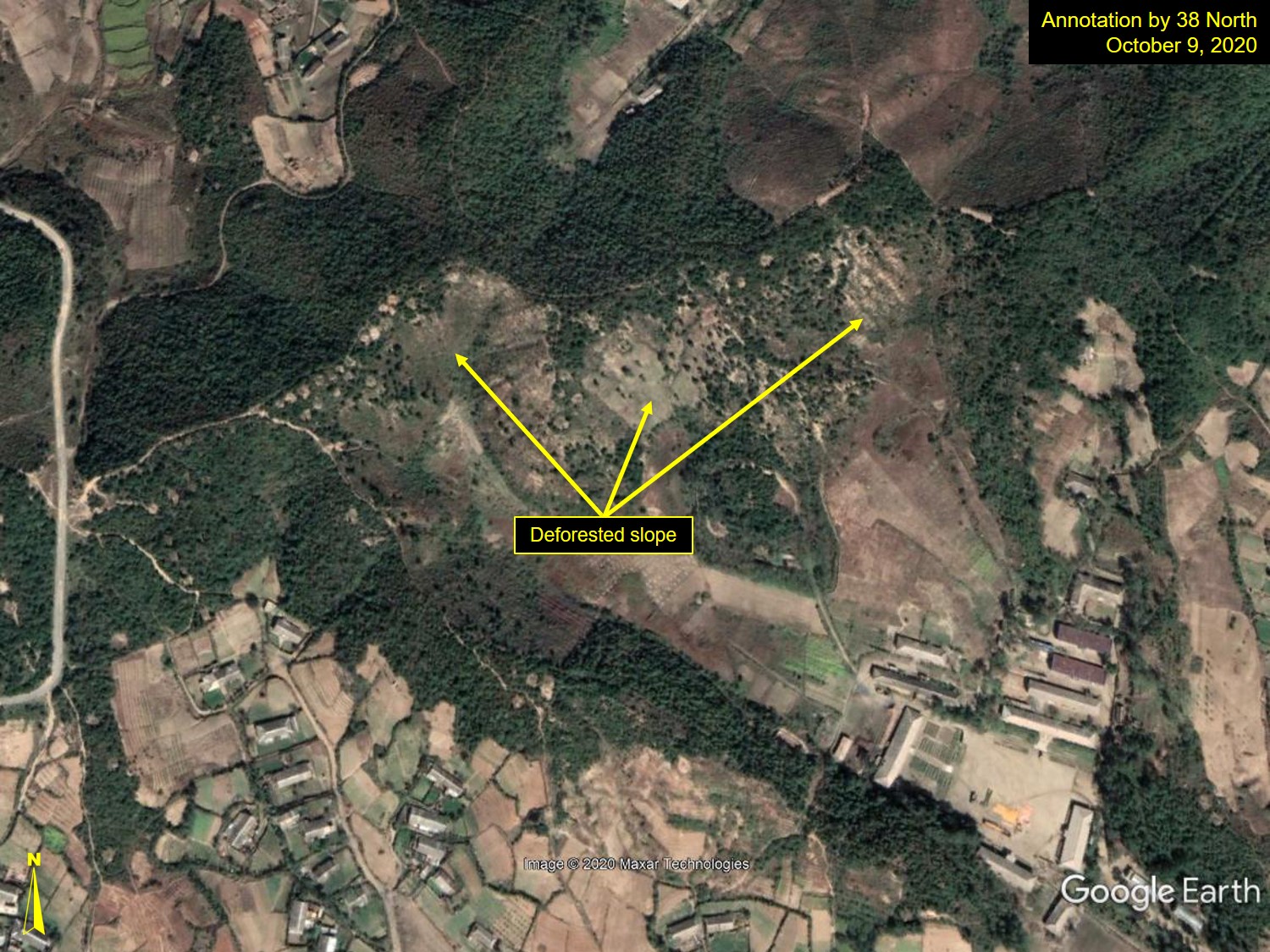 Figure 11 shows a possible electric transmission line and its towers, as well as access roads built through the middle of these mountain slopes. The high-tension power line track measures approximately 28 meters wide, and appears to have been constructed by March 2016; its connecting road, approximately 11 meters wide, is assumed to have been built after October 2014. Two possible electric transmission towers are observed in the middle of the road on the ridge tops, suggesting that the high-tension power line was constructed alongside the road.

Figure 11. Construction of a possible high-tension power line and its towers, and access roads on the rugged mountain terrain at Yonggol Mtn., Pyongyang. 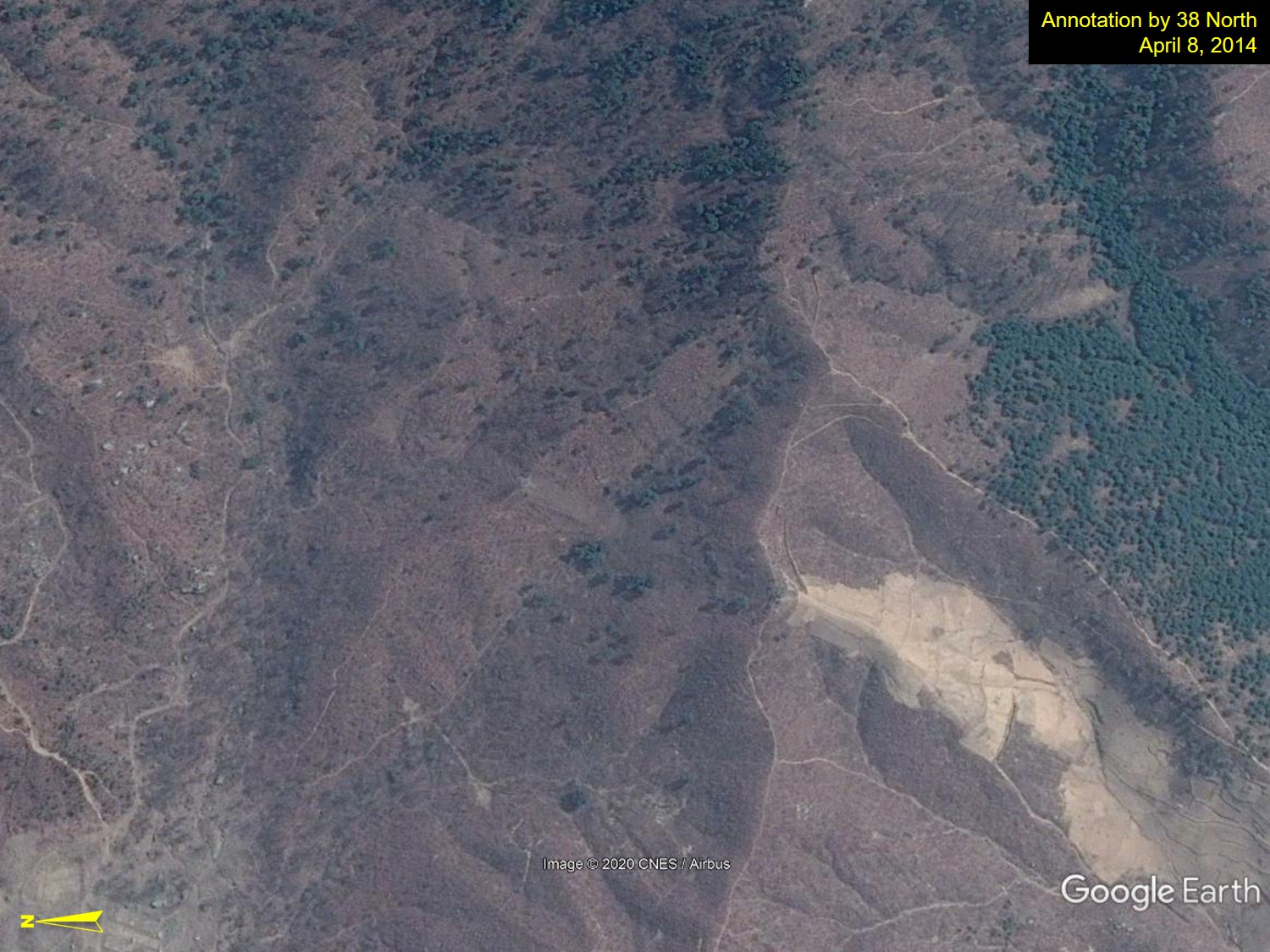 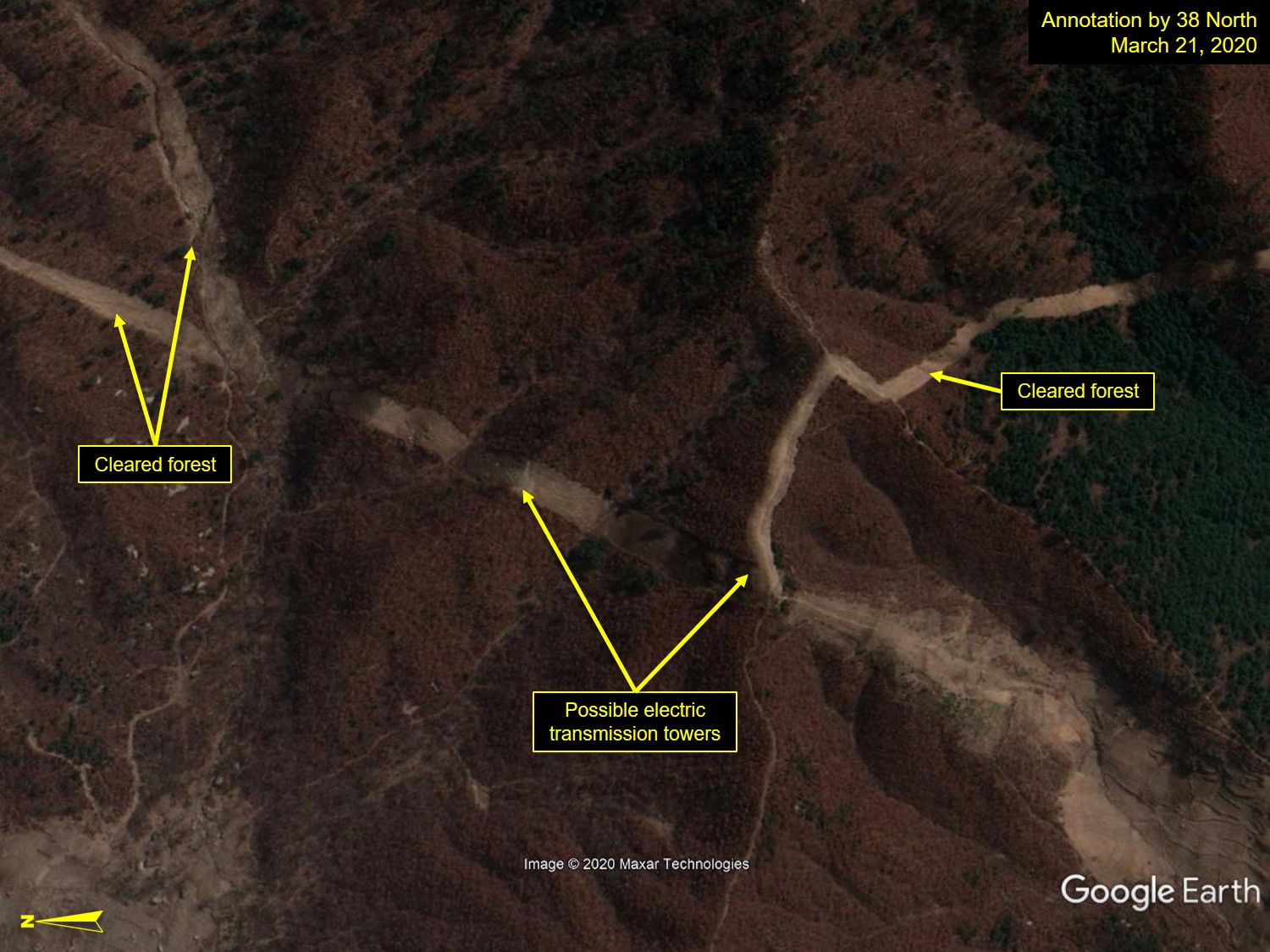 Based on imagery available via Google Earth, there are numerous examples of trees planted on the hilly and denuded slope fields between 2014 and 2019 to improve the wasteland. This was especially true around Pyongyang and throughout South Pyongan Province. At the same time, remote hillslopes, especially around rural villages, were still left devastated.

While Google Earth is a robust source of free satellite imagery, its coverage is limited, especially in more remote areas, making a nationwide assessment difficult. However, the findings so far appear to confirm trends noted in Landsat-8 OLI and MODIS MCD12Q1 satellite data.

North Korea has emphasized forest restoration since Kim Jong Un took power in 2012. Some successes have been observed in recent years, where devastated hill slopes have been revegetated to form healthy forests, especially around Pyongyang, the capital city. In some areas, namely the rural mountainous areas, however, deforestation is still found.

Wider monitoring is needed to get a more complete picture of how the land use/cover of North Korea is changing. While some positive developments have been noted, more imagery is needed, especially in northern and southern parts of the country, to make an accurate country-wide assessment.

Going forward, if North Korea wants its reforestation campaign to be successful, it needs sustained efforts to reseed barren areas and prevent the felling of trees. However, as noted by continued deforestation near rural villages, the regime will also need to address the use of wood as a low-cost or free source of fuel for household heating and cooking to make its reforestation efforts sustainable. This means not just planting more trees, but working to make alternative sources of fuel, such as the country’s abundant coal supply, more accessible to the people.

Park, K.S., S.Y. Lee, and S.Y. Park. “A Study on the Basic Directions for Forest Rehabilitation Programs Considering to Economic and Social Conditions of North Korea. Journal of Korean Forest Society (한국입학회지). 100, no. 3 (2011): 423-431. (In Korean with English abstract.)