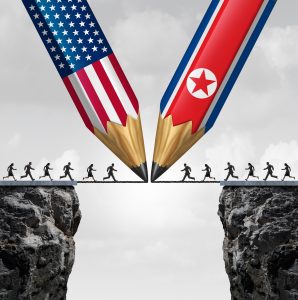 The US response over this period has been consistent: It would never accept North Korea as a nuclear weapons state for two main reasons. First, due to concerns about a nuclear arms race in the region among countries like South Korea and Japan, who have expressed interest in also pursuing nuclear weapons despite US extended nuclear deterrence commitments. And second, because of the possibility of nuclear weapons and/or fissile material finding their way from North Korea to rogue states and non-state terrorist actors. Interestingly, the North Korean officials I spoke with seemingly accepted this US position and, once presented, stopped pursuing this issue. It seemed at the time that they were simply reciting a required talking point, which once covered, they could move on to other subjects.

This agreement ended in late 2002 when North Korea was accused of having a secret uranium enrichment program for nuclear weapons, a violation of the spirit of the Agreed Framework. The US halted construction of the light water reactors, and North Korea, after an eight-year freeze on plutonium separation at their 5 MWe reactor, reactivated it and commenced with the reprocessing of spent fuel rods for nuclear weapons. The 50 and 200 MWe reactors were never reactivated.

At the request of the United States, China launched the Six Party Talks with North Korea in August 2003. After two years of intense talks, North Korea agreed to a September 2005 Joint Statement committing it to complete and verifiable dismantlement of all nuclear weapons and facilities in exchange for security assurances, a path to normalization of relations, economic development assistance, a peace treaty ending the Korean War and a discussion of the provision of a light water reactor for civilian nuclear energy, once it returned to the Nuclear Non-Proliferation Treaty (NPT) as a non-nuclear weapons state.

In June 2008, North Korea publicly demolished the cooling tower of its 5 MWe reactor and permitted foreign monitors to enter and commence with its dismantlement. Progress came to a halt in early 2009, however, and the Six Party Talks process ended when North Korea would not sign an agreement to permit nuclear monitors to visit suspect undeclared nuclear sites.

A February 2012 Leap Day Deal to resume negotiations between the US and North Korea ended abruptly when North Korea launched a rocket in April 2012, on the 100th anniversary of the birth of Kim Il Sung. This action was seen by the US as violating the terms of the deal, but the North Korean authorities maintained that the agreed moratorium on missile launches did not include the launching of a rocket to put a satellite in orbit, a claimed sovereign right of all nations.

In June 2018, former President Donald Trump met with Chairman Kim Jong Un for a historic summit that produced a short joint declaration committing both countries to a transformation of relations, an end to the Korean War, the complete denuclearization of the Korean Peninsula and the return of the remains of US troops killed during the Korean War. A subsequent summit in February 2019 in Hanoi failed when North Korea offered to halt all activities at its Yongbyon nuclear facility—producing plutonium, tritium and enriched uranium—in return for the lifting of five United Nations Security Council resolutions imposed in 2016 and 2017, banning multiple forms of commercial and trade activities.

The US countered, saying North Korea had to commit to the dismantlement of all its nuclear weapons and facilities, including undeclared uranium enrichment sites and all chemical and biological weapons and facilities. North Korea demurred, and the US summarily ended the summit. Since then, there has been only one working-level meeting. The North, however, has not conducted any nuclear tests or launched an ICBM since November 2017, although it has launched numerous short-range missiles and a submarine-launched ballistic missile (SLBM), as well as reportedly produced fissile material for nuclear weapons.

Years of negotiations with North Koreans tell us clearly that when we negotiated with them, they refrained from nuclear tests and long-range missile launches. But when we weren’t talking to them, especially during the 2009-2017 period, North Korea was in a race to enhance its nuclear and missile capabilities. Indeed, in 2017, a tense period of “fire and fury,” North Korea launched two ICBMs (Hwasong-14 and -15) and conducted a sixth nuclear test—its first of a hydrogen bomb.

We are now at an important inflection point with North Korea: Is denuclearization an achievable goal? Starting with the Korean War and through the years of egregious behavior by North Korea, there are understandably strong views on this issue. A review of the past 26 years of talks with North Korea will reveal that negotiations, in 2002, 2009, 2012 and 2019, ended abruptly when North Korea was either cheating, with its secret enrichment program, prevaricating, or demanding too much, such as at the 2019 Hanoi Summit. In each case, negotiations and meaningful discussions ended abruptly. The question is: Could and should we have stayed longer at the table to pursue these issues? Years of work, with some progress, was invested in each of these talks, only to have them end quickly. This and related concerns need to be reviewed.

Recently, at a military parade held in October 2020 on the 75th anniversary of the Workers’ Party of Korea, North Korea displayed a gigantic road-mobile intercontinental ballistic missile (ICBM), reportedly with the potential to deliver multiple nuclear warheads. And at a speech at the January 2021 Party Congress, Kim Jong Un talked about an ambitious military modernization program, to include tactical nuclear weapons, hypersonic missiles, solid-fuel ICBMs with ranges up to 15,000 kilometers and nuclear-powered submarines. His message to the US was clear: He is prepared to resume negotiations with the US, but from a position of strength.

Based on comments from Kim Jong Un in his meetings with US and South Korean officials, and from almost two decades of personally dealing with concerns related to North Korea, I’m guardedly optimistic we can get North Korea to denuclearize completely and verifiably if we can accept that North Korea will not give up its nuclear weapons until it receives, in an action-for-action, commitment-for-commitment process, the security assurances it needs and a path to normal ties with the US, with access to economic development assistance and foreign direct investment. Conditioning progress on the normalization of relations as well as on the dismantlement of prison camps for political prisoners is an issue North Korea knows the US will pursue.

Over the past 40 years, the world has seen bold and courageous leaders in China, with Vice Premier Deng Xiaoping, and in the former Soviet Union, with President Mikhail Gorbachev. They moved their respective countries in a different direction toward reform and openness. North Korea isn’t China or Russia, but its relatively young leader, Kim Jong Un, who studied in Europe, knows that complete and verifiable denuclearization will bring North Korea greater access to peace and security, and economic well-being for its people.

The author was the former Special Envoy for negotiations with North Korea from 2003-2006. The views expressed in this publication are the author’s and do not imply endorsement of the Office of the Director of National Intelligence or any other US government agency.