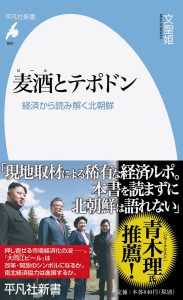 Experience acquired in life and knowledge gained from study are helpful in analyzing another country. The author of the book under review here, Mun Song Hui, drew from both her background and education to write with sympathy and credibility about the Democratic People’s Republic of Korea (DPRK). Born a Korean in Japan, raised as a partisan of Pyongyang and an overseas compatriot of the DPRK, she worked as a journalist in her “Fatherland” before acquiring a doctorate in Korean studies from Japan’s top university. Dr. Mun, sympathetic to the Koreans living north of the 38th parallel, provides in this book uncommon insights into a country to this day off-limits to many American experts on North Korea. As the title suggests, her book is written to explain in plain language, to a general audience, the difficult economic and political development of a country not willing to choose between beer and missiles.

Born in Japan in 1961 to a father from Korea and a second-generation Korean mother,[3] Mun Song Hui was a student in the Korean school system administered under the pro-Pyongyang General Association of Korean Residents in Japan (Chongryon).[4] Although she attended a Japanese university, rather than the flagship Korea University in Tokyo, Mun became a member of the pro-Pyongyang Korean Student League in Japan (Ryuhaktong).[5] In 1984, still a university student, she made her first visit to the “Fatherland,” traveling by ship with fellow Korean students from Japan’s Niigata to the DPRK port city of Wonsan.[6] An ardent “patriot” at that point (14), Mun followed in the footsteps of her journalist father[7] by joining in 1986 the Choson Sinbo,[8] a bilingual (Japanese and Korean) newspaper published in Tokyo with guidance from Pyongyang. In 1996, she spent four months (July—September) in Pyongyang as resident correspondent.[9] In 2003, she returned there for a second tour, during which she visited Seoul for the first time.

Mun lost her faith in the Fatherland the year before her second posting as foreign correspondent, when Pyongyang admitted in the 2002 DPRK-Japan summit to having abducted a number of Japanese citizens, including a young schoolgirl, Megumi Yokota. Mun felt betrayed, having believed until then her newspaper’s line, which followed that of Pyongyang’s Korean Central News Agency (KCNA), that Pyongyang’s enemies had fabricated stories of abductions (9). She resigned from the newspaper at the end of 2003, following her return from Pyongyang, explaining that she needed to care for her ailing mother as a way to avoid burning her bridges. In 2008, Mun enrolled as a graduate student at the University of Tokyo’s Graduate School of Humanities and Sociology. In 2017, she earned a Ph.D. from its Department of Korean Studies; her thesis focused on Pyongyang’s economic reform policies.

Dr. Mun wrote the book under review here largely based on her early Fatherland visit, her months as the Pyongyang correspondent for the Choson Sinbo, and the Korean fieldwork that she conducted in the course of her doctoral studies. In total, she made 15 trips to the DPRK between 1984 and 2012. Her interest in the lives of ordinary people is the common thread running through the observations she made while in the country as a university student, a journalist, and an academic researcher (23-24). Extraordinary are the length and breadth of her experiences on the ground, which set her apart from many other writers on North Korea.

As a university student, she had a glimpse of the DPRK before the grave economic crisis precipitated by the collapse of the Soviet Union and East Bloc and China’s turn to the West. Her first tour as foreign correspondent took place when the DPRK, in the depths of its Arduous March, was struggling with starvation and the collapse of production. Her second assignment there for Choson Sinbo was at a time of economic recovery and budding market activities. In subsequent visits as an academic, she saw more indications of Pyongyang’s measures of economic reform and opening.

In the summer of 2008, Mun looked about in wonder at the vitality of the scene and the variety of products on sale on her first visit to the Thongil (Tongil) Market in Pyongyang’s Rangrang District, wondering if she were really in socialist North Korea. The farmer’s market in Pyongyang that she had visited in 1989 had been a much smaller affair. In field research, she compared the prices for domestic and imported consumer items over time by noting prices at the state-run Pyongyang Department Store No. 1 and comparing them to those at the Thongil Market.

Mun also had access to local experts. In September 2011, she heard a lecture in Pyongyang from Dr. Hwang Han-uk of the Economic Institute, Korean Academy of Social Sciences (KASS), on the DPRK’s trade in foreign services, including the export of Korean laborers to construction projects around the world (100). She talked to ordinary people as she traveled about the country, including visits to the major coastal cities of Hamhung and Chongjin and the special economic zone of Rajin-Sonbong (Rason) near the junction of the Korean, Chinese and Russian borders.[10] In the remote Samjiyon area in the interior, she talked about local conditions with several women in a three-table restaurant that seemed to the author like something straight out of a South Korean historical drama (61).

While her on-site observations from various cities, including Pyongyang, are what set this book apart from others, she was by no means free to roam on her own about the country.[11] In 2011, for instance, when a train returning her from Hamhung to Pyongyang stopped moving for several hours at a small station along the way, she witnessed from the window locals selling goods in an impromptu market and children begging but, in spite of her status as a fellow Korean, she was forbidden to leave the train (52). Even as an overseas compatriot of the DPRK, the author always traveled in the company of a guide and, often, a driver.[12] Other than visiting sites suggested by her hosts, she would have to make requests via the guide for subjects to interview or places to see.[13] However, what does distinguish this book from most other visitor accounts is Mun’s view of the guides and drivers not simply as spies or obstacles to information gathering, but as problem solvers and, indeed, sources of information. Mun notes the crucial role of her guides in coordinating her academic fieldwork requests. She also writes of the “wall” separating the white-collar guides from blue-collar drivers and how, when alone with a driver, she often received better advice and information than from the guide (115-16).

Mun also supplements her own observations with those of other visitors and a wide variety of sources. She cites a 2015 Shukan Toyo Keizai article by visiting journalist Fukuda Eisuke on agricultural policy innovation to update what she observed on her own visit to a farm in August 2008 (82-84). She supplements her own insights from visiting Rajin-Sonbong by drawing on reporting by Ri Thae Ho in a 2012 Choson Sinbo article of economic construction in that trade zone (93). Her sources range from official DPRK media (Korean Central News Agency, Nodong Sinmun, and Kulloja among them) to newspapers, magazines, books and government publications of the Republic of Korea (ROK) and Japan and such Western sources as Britain’s Economist and the Voice of America.

This book is largely about Pyongyang’s efforts to develop its economy while also building intercontinental ballistic missiles (ICBMs). In six chapters, the author writes of the emergence of market forces following the crisis of the latter half of the 1990s, policies of economic reform under the former leader Kim Jong Il and the incumbent Kim Jong Un, and the economic strain that comes from trying to develop a nuclear deterrent while seeking economic growth, all while suffering under the international economic sanctions levied as a result of those military actions.

As part of her efforts to appeal to a broad audience, the author includes a chapter on “The People of North Korea” and another on reform and the potential for economic development as seen in the emergence of a variety of Pyongyang beers and cocktails. In the latter chapter, Dr. Mun writes of Choe Yun Jae, a veteran cocktail mixer at the Pyongyang Hotel, endowed with a talent for putting together a Blue Hawaii, Scarlett O’Hara or Salty Dog for appreciative customers. The engaging Choe, a gold-medal mixologist, has an incentive for offering such fascinating service: The more drinks she serves, the higher her pay. She also writes of Taedonggang Beer, a newer brand (at the time of her visit) brewed from imported British equipment, which swept past the older brews—Rongsong, Ponghak and Kumgang—and established a reputation as a better beer than any brewed in the ROK. The chapter also touches on Pyongyang’s massive Kyonghunggwan beer hall (with places for 1,500 customers, seven varieties of beer, and higher prices for foreign customers), its beer festival and ambitions to export its brews.

The book’s final two chapters cover developments in inter-Korean economic cooperation, Pyongyang’s efforts to develop ICBMs equipped with nuclear warheads and the “historic” 2018 US-DPRK summit in Singapore. In addition to a standard recounting of developments on the peninsula, from the Nordpolitik of ROK President Roh Tae-woo to President Moon Jae-in’s 2018 speech before thousands at Pyongyang’s May Day Stadium, the author ends by assessing that the possibility of a breakthrough in relations with the United States and, by implication, prospects for greater economic development following the lifting of the crushing sanctions, depends on the “seriousness” of Pyongyang (239).

In the book’s afterword, the author reveals another act undertaken years after her loss of faith in 2002 in the socialist Fatherland: In 2018, she became a citizen of the ROK. Her first overseas trip from Japan with her new passport was to Seoul, where she visits memorials to two Korean youths who died in the South’s democracy movement and the Kim Dae-jung Presidential Library and Museum. An ROK journalist friend introduces her to a southern beer worthy of drinking alongside northern brews: Kloud. Gazing at the Han River, finding it similar to Pyongyang’s Pothong River, she thinks back to the riverside shops she saw in Pyongyang selling Taedonggang Beer and imagines the day when Korean stores can sell Taedonggang and Kloud together.

Mun has not written an academic treatise on economic development. Rather, she has given us a book that, drawing on the information gathered in fieldwork for her Ph.D. dissertation, presents a sympathetic portrait of Koreans living north of the 38th parallel, a nuanced view of Pyongyang’s efforts since the Cold War’s end to introduce economic reforms without disturbing the political structure, and a critical view of the DPRK’s actions to develop a nuclear deterrent. The book includes numerous photographs taken by the author in her many trips, a number of graphs and tables and a handy timeline of DPRK developments between 1945 and 2018.