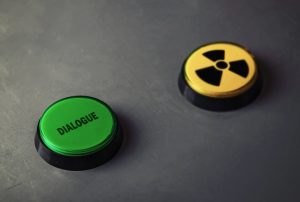 North Korean officials, including Kim Jong Un, have made several statements in recent months that begin to bring clarity to the country’s evolving nuclear doctrine. Within those statements, there has been a notable emphasis on the role of tactical nuclear weapons (TNWs) in the Democratic People’s Republic of Korea’s (or, North Korea’s) larger nuclear strategy and the potential for early nuclear use should conflict break out on the Korean Peninsula.

Jenny Town: Dr. Hecker, thank you for taking the time to talk with us today. I thought I might begin by asking, what does North Korea mean when it refers to tactical nuclear weapons and is this a new direction for its program?

Although there is no single definition of tactical nuclear weapons (TNWs), they are generally shorter-range weapons of lower nuclear yield that are potentially used in warfighting. In the North Korean case, one could say it’s been working on TNWs all along, as its program was originally centered around the development of nuclear warheads that could be mated to its short-range Scud and medium-range Nodong missiles that can reach several hundred to a thousand miles to cover all of South Korea and most of Japan.

JT: I think that’s a really important point. If North Korea has pursued tactical nuclear weapons since the outset of the program, what is different now?

SH: What we’re seeing now is more discussion of what purpose the weapons serve. During a speech at the April 25 military parade, for instance, Kim Jong Un emphasized the role of TNWs in North Korea’s nuclear program and his strategy for using them. While this may have been his first time talking about them so clearly, they have been part of his nuclear strategy for several years.

But let’s review what he said. Kim explained that the country’s nuclear weapons are primarily for deterrence, that is, the strategic nuclear weapons are meant to deter adversaries from attacking North Korea. But then he said that there was also a secondary purpose for nuclear weapons if other countries try to infringe on the DPRK’s fundamental interests.

It was very interesting that he left the door wide open as to what the secondary purpose is. That could mean he reserves the right to use nuclear weapons when North Korea feels threatened. However, later in his speech, he essentially makes the connection that the secondary purpose would be tactical, rather than the strategic nuclear weapons meant to reach the United States and hold the US mainland at risk.

JT: Is this the first time we’ve heard the North Koreans talk about its nuclear doctrine in this way?

SH: In my reading of North Korea’s statements over the years, bits and pieces about what it would do with nuclear weapons have been there all along. In the past, it has threatened the use of nuclear weapons against the United States and threatened South Korea with total destruction. Now it seems to be pulling those pieces together.

However, when it comes to North Korea’s strategic weapons capability, Pyongyang has demonstrated it knows how to build a high-yield nuclear weapon and build a sufficiently powerful intercontinental ballistic missile (ICBM) that could reach the United States. But it has not yet demonstrated that such an ICBM could carry a nuclear warhead that would survive the launch, flight and reentry to hold the United States mainland at risk.

The North Korean nuclear weapons we have worried about for the last 10 years or so, and we should continue to be concerned about, I would put in the category of tactical nuclear weapons—those they can put on short-range Scuds or medium-range Nodongs.

SH: Probably not. More likely, the country is working to make sure that its TNWs will be small enough to fit into the various types of new delivery vehicles. For instance, making maneuverable warheads that are less susceptible to ballistic missile defenses to mate with a hypersonic glide vehicle. If you’re going to put a nuclear weapon on a hypersonic glide vehicle, that may be a bit more challenging than putting it on a Scud or Nodong, but it isn’t fundamentally different.

SH: If you look at the history of North Korea’s nuclear testing, it has demonstrated the ability to build a plutonium-fueled bomb by 2009 and highly enriched uranium (HEU)-fueled bombs at least by 2013. The yield of the February 2013 test was seven to 14 kilotons or roughly the size of the Hiroshima bomb. These would likely fit in North Korea’s Scuds and Nodongs. Skip forward to the September 2017 test that was a huge explosion, proving, in principle, the ability to make a hydrogen bomb with a yield of over 200 kilotons, or roughly 10 times that used on Nagasaki. However, can they fit a bomb of that high of yield on a missile in a form that could survive reentry? It’s likely going to take more missile tests and more nuclear tests to achieve that.

Moreover, while North Korea may have confidence in building HEU-fueled bombs or warheads for Scuds and Nodongs, further testing is likely needed for some of the more advanced versions of TNWs, such as for hypersonic or submarine-launched ballistic missiles.

In addition, the North may choose to develop battlefield tactical nuclear weapons as Pakistan has done. These weapons may be in the one to two-kiloton yield range shot from multiple rocket launchers or used as nuclear landmines. These are less safe and less secure than missile-launched nuclear weapons and would require some level of delegated authority.

JT: Commercial satellite imagery has shown North Korea is working to restore the southern test tunnels at its Punggye-ri Nuclear Test Site to operational status. How likely is it that Pyongyang will decide to conduct a test in the near future? What would you expect the North will test next?

SH: Satellite imagery has shown definite signs of nuclear test preparations. Some analysts have said the timing will be politically driven. I think a test appears likely, but the timing will be largely determined by technical considerations. We don’t know what it will test next, but the North does need more nuclear tests to demonstrate it can miniaturize a warhead for ICBMs and that those warheads will survive the rigors of launch, flight and reentry.

JT: Do you think there’s anything that can be done to prevent North Korea from resuming nuclear testing?

SH: A return to serious diplomacy would have prevented, or at least postponed, another nuclear test. Remember that North Korea has offered several times to halt nuclear testing, but Washington declined. China strongly opposes more nuclear testing because of potential radioactive leakage across the nearby border. However, with no ongoing US-North Korea diplomatic engagement, Pyongyang may consider this to be a propitious time to conduct another test without suffering serious political consequences.