Recent commercial satellite imagery indicates that construction at the Sunchon Airfield has made significant progress over the past year. Efforts to improve and lengthen the main runway appear to be close to completion, while work on new aprons, taxiways and aircraft shelters is steadily progressing. These upgrades are making the Sunchon Airfield into what will likely be North Korea’s most modern military airfield. 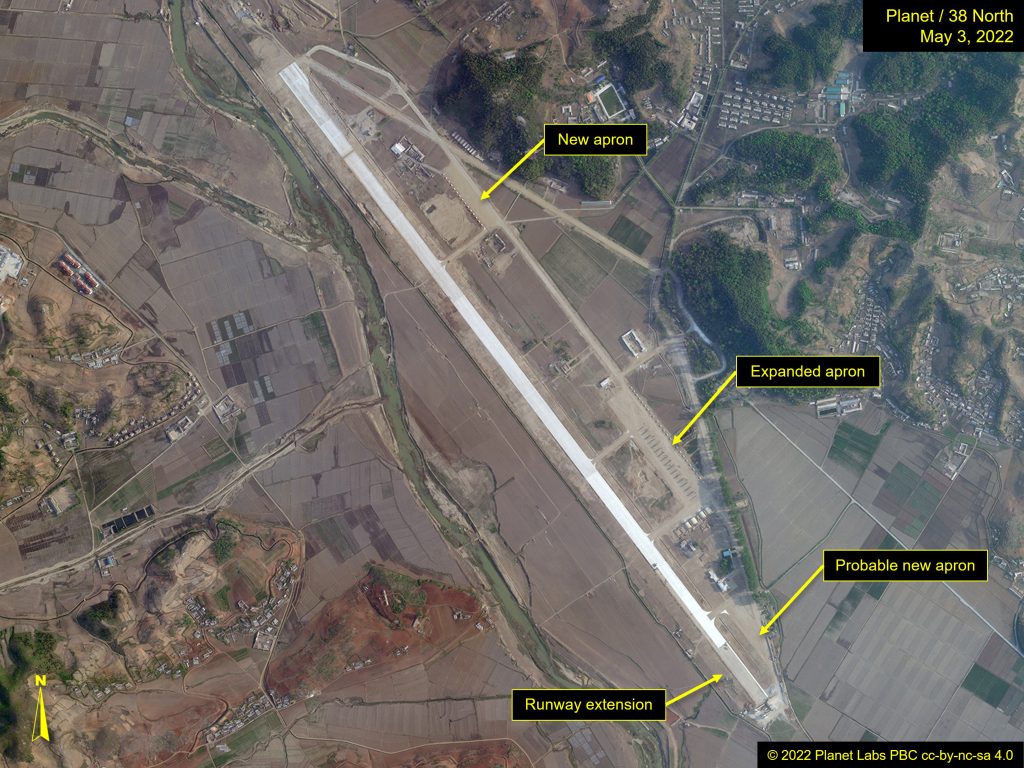 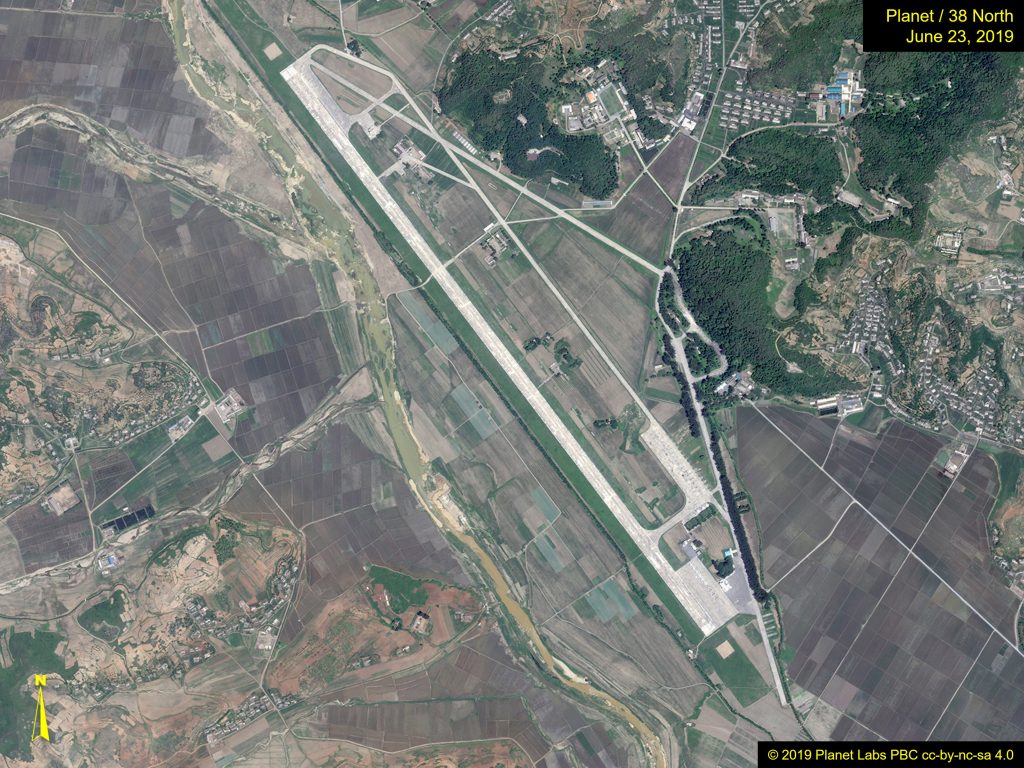 The Sunchon Airfield is 45 kilometers northeast of Pyongyang and 30 kilometers northeast from the Sunan Airport, the country’s main commercial airport. Construction at the airfield began sometime in April 2021, shortly after 31 Su-25 “Frogfoot” and 12 MiG-29 “Fulcrum” aircraft were relocated to the Pukchang and Kaechon Airfields. The aircraft are the most advanced in the Korean People’s Army Air Force.

On imagery from May 3, 17 building frames are visible in the expanded apron at the center of the airfield. These are similar to framework seen at Wonsan-Kalma Airport in 2015 during the construction of military aircraft shelters.

Figure 2. Framing work on the expanded apron at Sunchon Airfield. 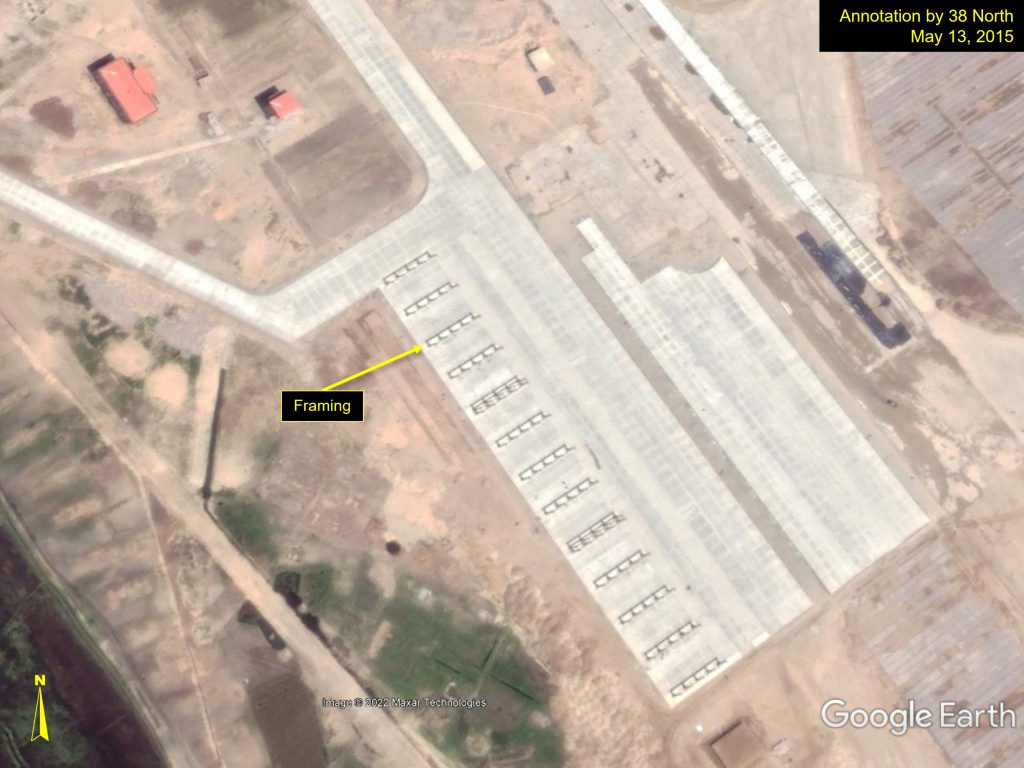 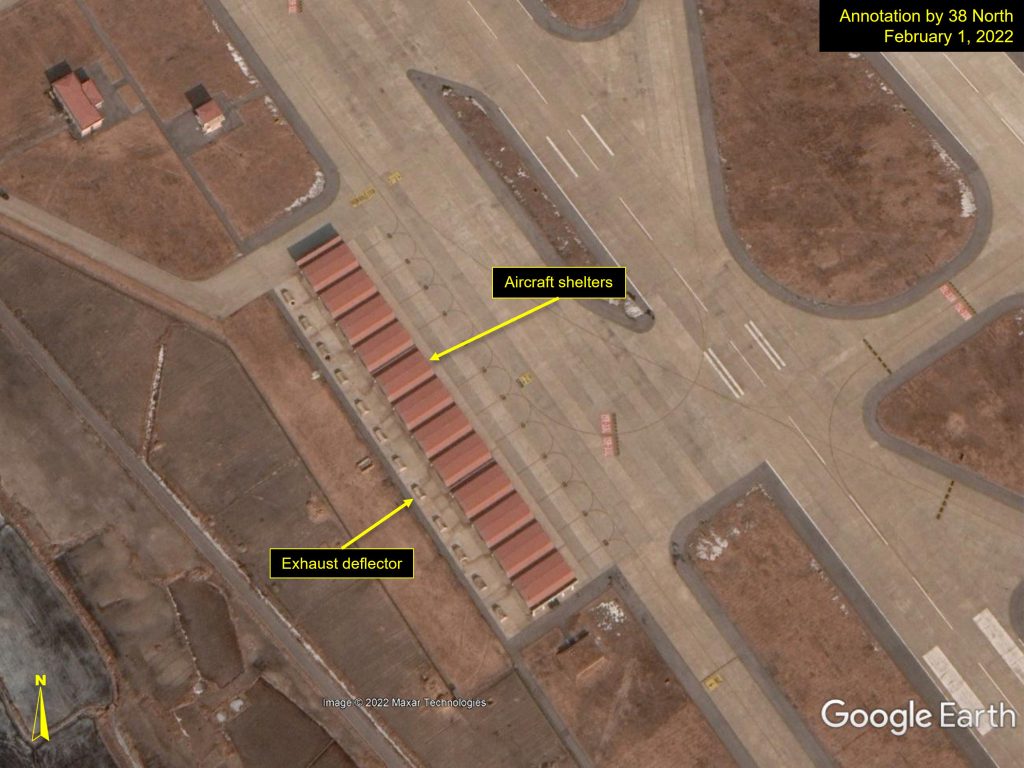 At Wonsan-Kalma, exhaust deflectors are located to the rear of aircraft parking positions, and between them are additional objects that are probably generators to start the aircraft. At Sunchon, similar objects appear alongside parking positions on both the new northern apron and expanded apron. There are 15 on the former and 25 on the latter.

Just to the north of the expanded apron, a new taxiway is being constructed that leads directly to an underground facility located inside a hill adjacent to the airfield. Two new buildings are also visible. One is close to the apron and is likely an administrative building, while the second is alongside the new taxiway. Its purpose is unclear.

Figure 6. New taxiway being constructed that leads to underground facility.

Alongside the runway extension at the southern end of the airfield, a new building has been constructed alongside what was likely the main administrative building. The new building has a circular tower at the front and is probably a new control tower. Nearby, a new apron appears to be under construction.

It was in this area that Kim Jong Un viewed a demonstration of fighter aircraft in April 2020. The administrative building can be seen in the background of some images.

Additionally, four hardened aircraft shelters that were previously covered with earth have been uncovered, and alongside them are two new weapons storage bunkers with berms around them.

Together, the upgrades at Sunchon Airfield stand to make it the most modern military airfield in North Korea. The facilities and construction appear to match much of what exists at the Wonsan-Kalma Airport, which is a dual-use commercial and military airport on the eastern coast of the country. The likely return of the Su-25 and MiG-29 aircraft will reinforce this position as the air force’s premier airfield.