Recent commercial satellite imagery of the Punggye-ri Nuclear Test Site indicates that two new buildings have been erected at the Main Support Area since June. Since March, when site reactivation activities were first observed, more than 10 new buildings have been constructed in the multiple support areas, suggesting long-term plans for use. However, little activity is apparent at the Tunnel No. 3 complex, despite efforts to reaccess these test tunnels earlier this year and wide speculation of a forthcoming test. Heavy rains over the past few weeks have set back repair efforts of the road leading to the two still-dormant tunnel complexes in the north and west, preventing the possibility of restoring access to those tunnels for now.

Commercial satellite imagery from July 27 reveals two new buildings have been erected in the lower courtyard of the Main Support Area over the past month. While their specific functions cannot be determined, the continued buildup of support infrastructure, including an oddly placed building inside the former greenhouse, suggests long-term plans for the site. On the north side of that same courtyard, a structure with interior segments, started in May, remains uncovered. Given the pace at which other buildings have been erected and the removal of building materials from the immediate area, this structure may remain open. Its purpose is unclear.

Despite continued speculation about when a nuclear test might be conducted, little activity is detected around Tunnel No. 3. Previously reported cabling remains in place and can be traced from the entrance to a small support building located across a stream from the adit, which presumably houses equipment such as a generator or air compressor. Across the road from the adit, there is a large, covered shelter spanning eight by seven meters. The imagery angle offers a unique view of this structure, revealing a lean-to design. While it can provide a sheltered workspace, a considerable amount of test-related equipment can be stored here as well, concealing it from both weather conditions and overhead satellites. 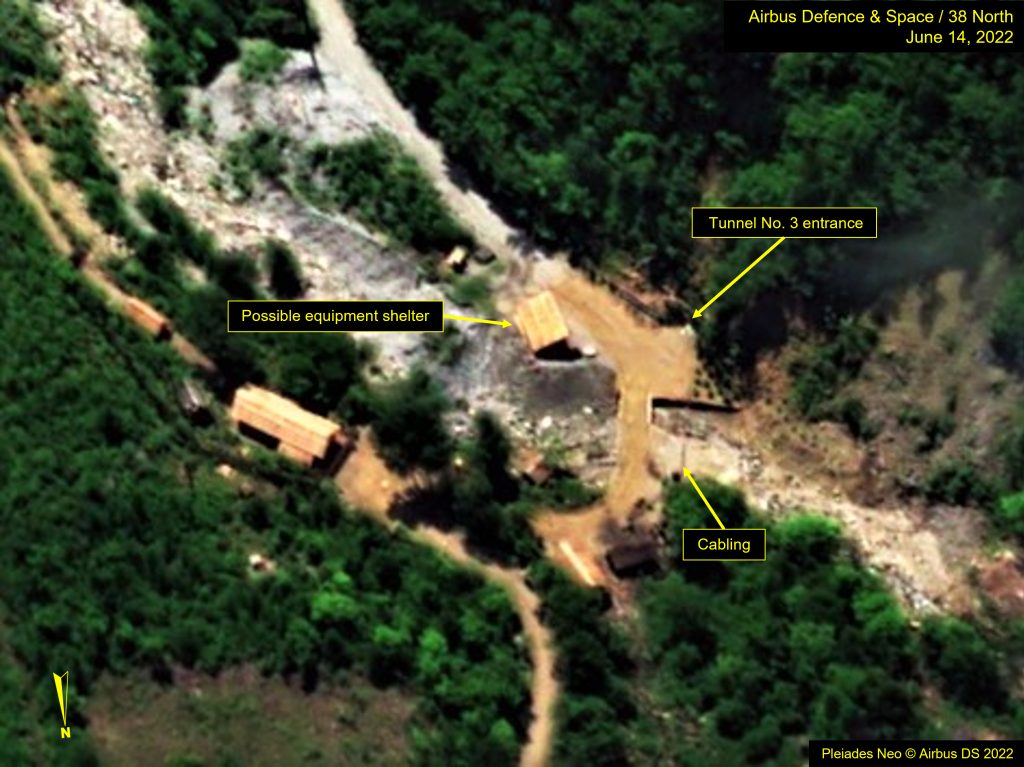 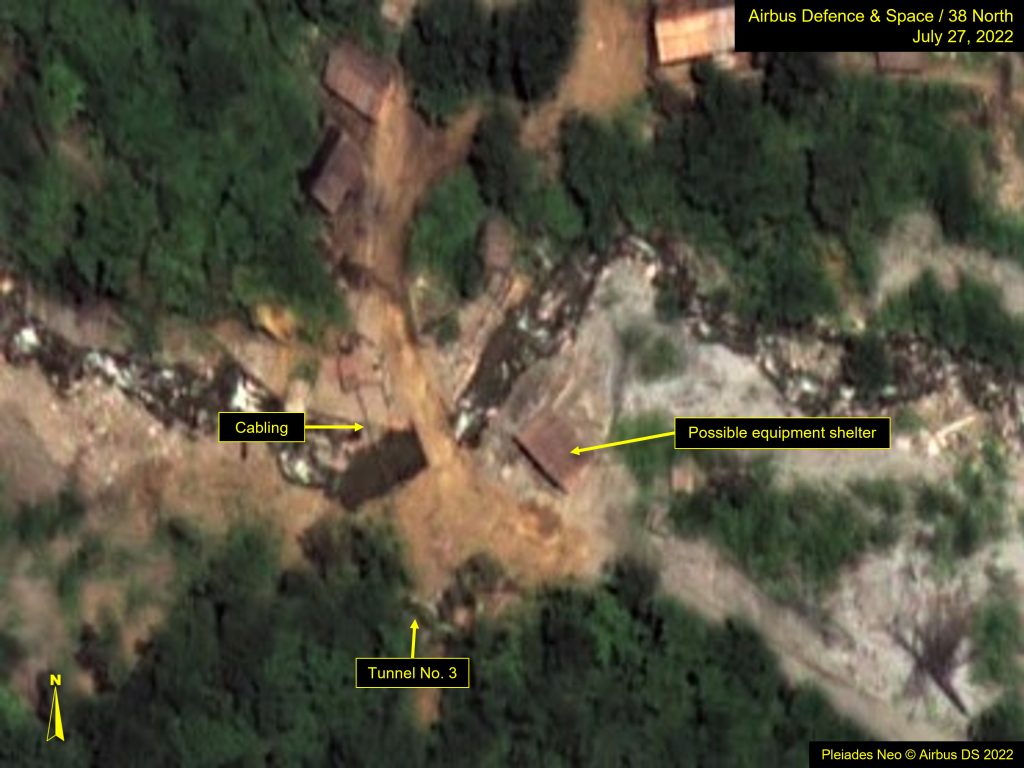 North of the support area, repair work on the road leading to Tunnels No. 2 and 4 (former North and West Portals) has been underway since at least mid-June. However, since then, erosion damage to the road near Tunnel No. 4 has been evident. In imagery from July 27, a landslide has taken out the retaining wall that was being built to support the road above it. Until this road is fixed, access to Tunnels No. 2 and 4 is limited to foot traffic, with a footbridge crossing the stream facilitating passage to the former.

Figure 3. Landslide blocking road to Tunnels No. 2 and 4. 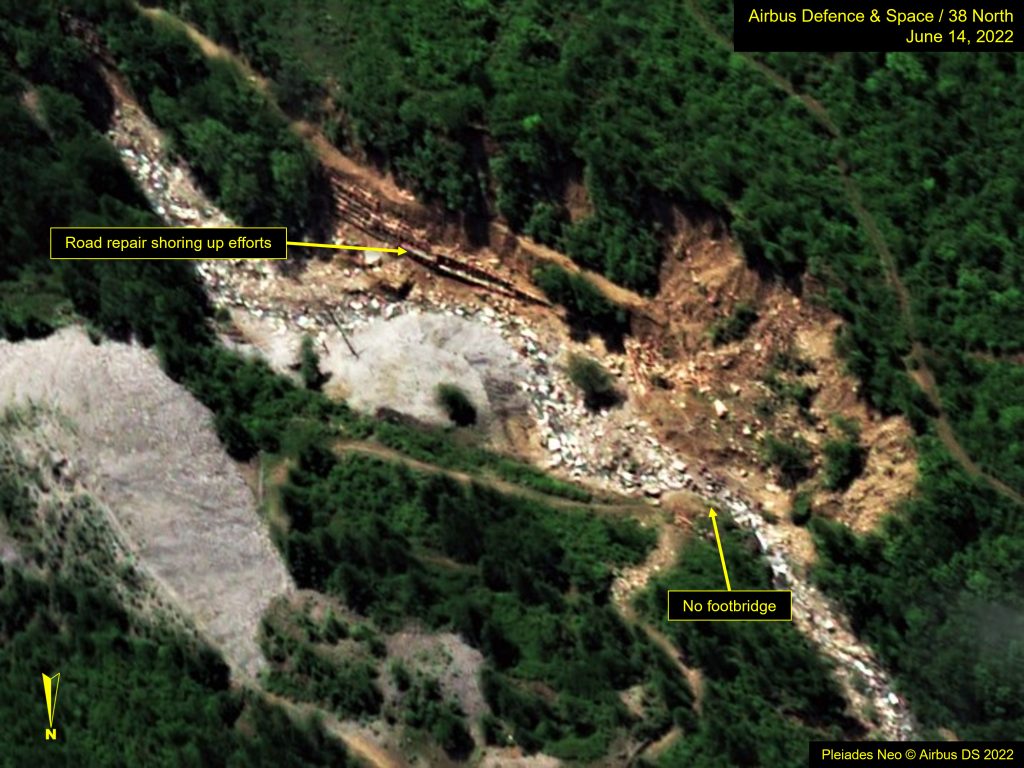 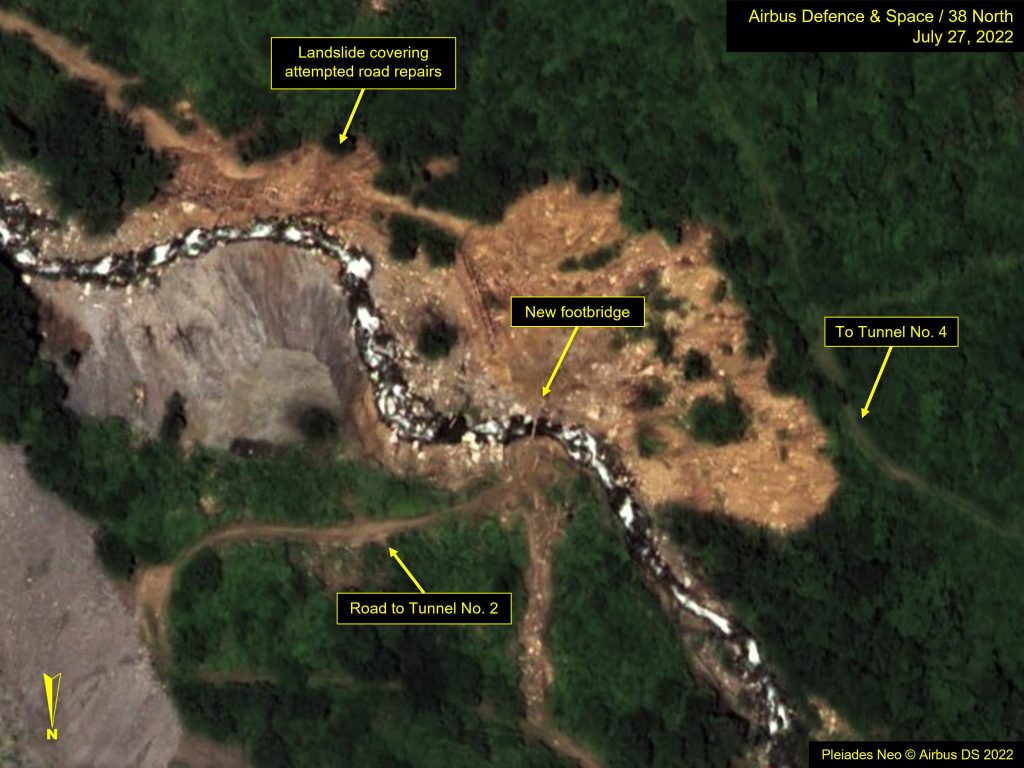 Imagery from July 27 showed no vehicle activity at any of the southern support and command areas. Vehicles have been seen at these locations only on occasion.