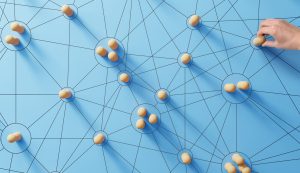 What does it mean to say that a government policy designed to help North Korean defectors integrate into South Korean society ought to be “good for South Korea”? To whom and where does such an amorphous, normative phrase refer? While nobody wants policies that are bad for Korea, the exact meaning of “good for South Korea” is hard to pin down.

We dug deep into the attitudes of the South Korean public toward North Korean migrants in the first article of this series for 38 North by measuring their willingness to have North Koreans as their neighbor, employee or political representative. The results were clear. Whether it be voting, hiring or simply living side by side, the number of years a defector-migrant has been in South Korea plus their occupation proved to be the key pieces of information in deciding whether an individual was preferred by the local population or not.

The findings of our second experiment reflect the same trends in South Korean society and inter-Korean relations. We found that South Koreans come at questions of what financial and other business support should be offered to defector-migrants with an economic rationale that is based on both material self-interest and national economic concern. In the main, there is no longer an appetite in South Korea for delivering support on altruistic grounds. Whatever is done must be economically rational and “good for South Korea.” For those seeking more detail on the nuts and bolts of the project, a full working paper is available at this link.[1]

Of course, these types of individuals are two extremes. While such types may exist amongst the 34,000 resettled North Koreans in South Korea today, the point of our findings was to figure out the requirements for successful integration. The population of North Korean newcomers in the South is diverse in terms of demographics and background, which the South Korean government should take into consideration when providing these individuals with the proper support. Although public support is not entirely essential for the delivery of government assistance, it is certainly preferable that the public supports the government’s measures.

In another experiment that we ran, we sought out what kinds of government support for North Korean entrepreneurship would garner the most support among South Koreans. Our research revealed that migrant entrepreneurship and the employment support it provides serves to support deep socioeconomic integration. We also found that this is an area that requires more attention in South Korea.

To measure South Koreans’ policy preferences for North Korean defector entrepreneurship, we used a choice-based conjoint design, as we did for our determinants of integration survey. As an experimental tool that’s become more frequently used in the social sciences, this type of design allows us to consider the causal effects of various policy attributes. Drawing from the “policy mixes” literature and research on immigration attitudes used in comparative political studies, we identified eight relevant attributes that we should take into account when determining support for defector entrepreneurship policies.

These attributes cover policy goals and rationales for supporting the policy, public cost, the instrument to be used (e.g., grants or loans) to determine program eligibility, the policy endorser, and the views of civic and interest groups on said policy. Each attribute is defined by a varying number of values that are comparatively relevant to the South Korean context. The table below lists the attributes, values and aspects of the policy mix to which these attributes belong. An overview of the full policy mix of attributes and values can be viewed here.

As we did before, we recruited 2,009 South Koreans for our experiment by using an online panel of participants that are broadly representative of the national population. Each respondent was asked to imagine that the South Korean government was considering additional forms of support for businesses owned by North Korean defectors. They were then presented with two hypothetical policy proposals and asked to choose which one they supported. Each respondent did this exercise five times, where each time they evaluated a unique set of policy proposals. After the fourth round, the respondents were asked to explain—in an open-text format—why they chose the policy option that they did.

The resulting data was then used to estimate the impact that each attribute value had on the likelihood of the proposal being supported and, along with the open-text data, to further explore the respondents’ motivations for supporting the policy mix that they did. Through this, we were able to understand what drives public support for the social integration of North Korean defectors via entrepreneurship policies.

Analysis of the conjoint data told us that South Koreans prefer policies with the explicit goal of supporting employment that is funded via a repayable loan instrument paid for by corporate tax increases and that the business community supports. Policies that only target profitable defector-run businesses or those who have entered into a joint venture with a South Korean partner were the most likely to be chosen. Our findings also show that an economic rationale based on a material self-interest and national economic concern motivated respondents to support any given policy position.

However, we also found that respondents were motivated to support a policy if they were simply told: “It is good for South Korea.” This is in stark contrast to other policy rationales, such as those that benchmark other countries’ immigration policies or tell respondents that the policy will help combat discrimination against defectors, which actually serve to dissuade support for defector business support policies. While preferences motivated by an economic rationale come across as relatively straightforward and not completely unexpected, it is less clear what supporting something that is “good” for the country entails.

To unpack the meaning and significance of this finding, we examined the open-text data more closely. When respondents were offered the chance to explain their motivations in greater detail, we were able to obtain a snapshot of some long-standing challenges related to life and politics on the divided Korean Peninsula.

By using a machine-learning technique, we were able to determine the underlying topics in participants’ various responses. This type of technique assigns words to topics that reflect some underlying meaning or structure, which in our case, allowed us to find two topics that broadly reflect the motivations behind respondents’ policy preferences (see Figure 1 below). The first topic corresponds to the economic rationale we derived from the conjoined data analysis and is defined by words such as: “support,” “tax,” “policy,” “profitable” and “employment support.” The second topic reflects normative thinking on the matter that includes the words: “North Korean,” “good” and “support.” While we focused equally on these two topics in our full research paper, our focus is on examining the second topic in greater detail for this particular article, as we believe it says more about inter-Korean dynamics. 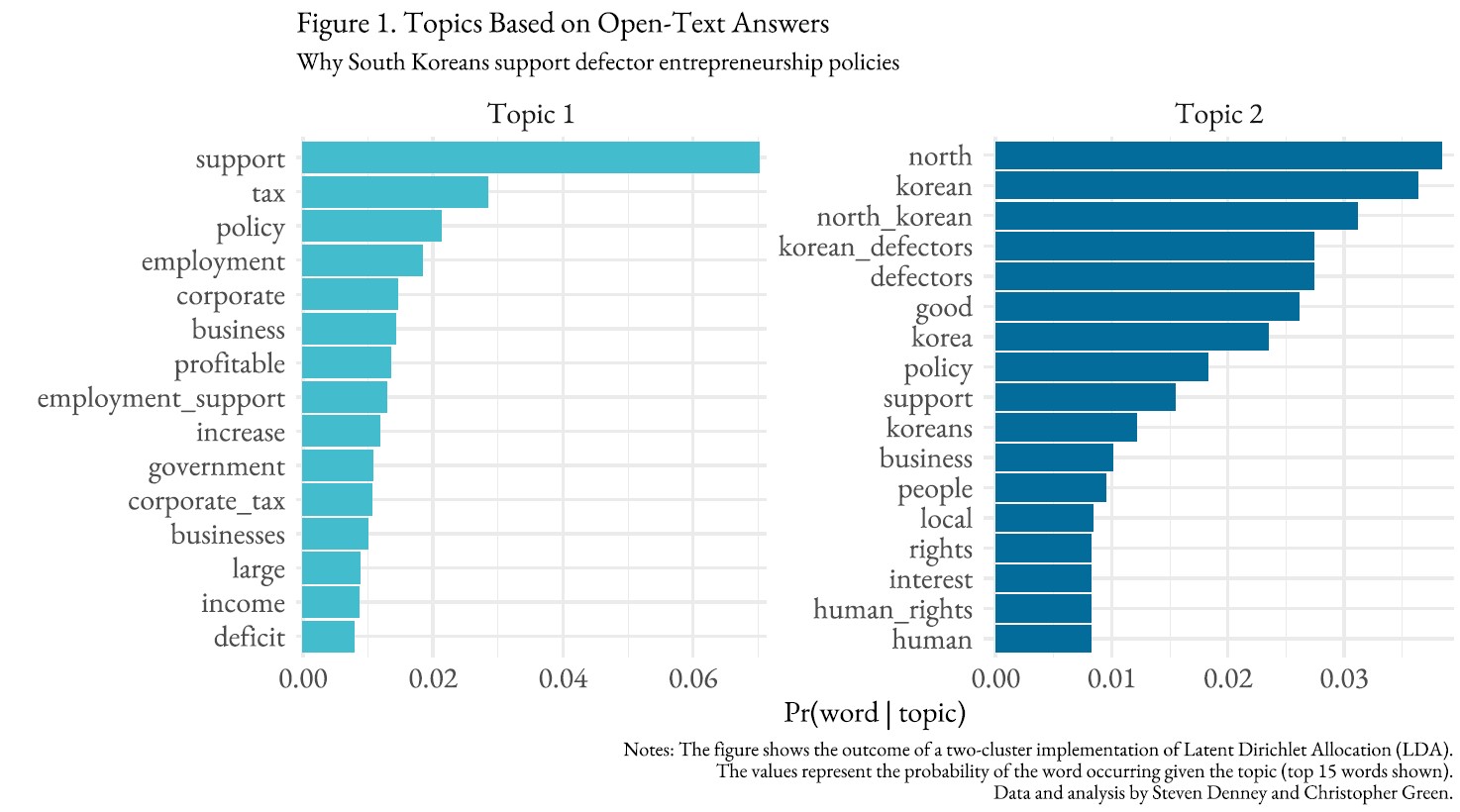 Here are some examples of the things participants of this actually said:

“If North Korean defectors are successfully settled, it will be good for South Korea in the end.”

“It’s not about helping North Koreans. It is about what is good for South Koreans.”

“Because it is good for South Korea.”

So, what does it mean for a policy proposal to be “good for South Korea”? If we were discussing France, Japan, or any number of other countries, the answer would be self-evident. There is no North France or North Japan, and despite some lingering colonial hangovers, neither country claims another territory and its people as its own. But in the case of the two Koreas, it is a contestable normative claim as South Korea’s constitution asserts that North Korea and its people belong to the South.

These political choices and legal decisions reflect the history of Korean identity. For decades, based on the concept of pan-Korean ethnic nationalism, there was a general assumption that people born in South Korea viewed those raised in North Korea as indistinguishable brethren, save for the border that was hastily drawn between them at the end of World War II, and reinforced after the Korean War ended in stalemate in 1953. The 2006 text Ethnic Nationalism in Korea, for one prominent academic example, explores in detail how this came to be. According to the logic of ethnic nationalism, which has been further reinforced by South Korea’s constitution and related legal decisions, any North Korean migrating to the South was seen as a natural member of the South Korean community for whom government policy, according to a significant minority of respondents, should be “good.”

However, and not for the first time, we found these assumptions to be very much open to questioning. In our experiment, claims motivated by abstract appeals to the national or common good were revealed to not be pan-Korean in their fundamental outlook. Instead, they were more or less exclusively focused on South Korea. If North Korean defector entrepreneurs happen to benefit from a government support policy, it is only because that outcome is in the broader national interest as it pertains to jobs, the economy, and above all, the South Korean people.

Of course, it isn’t wholly accurate to declare pan-Korean nationalism to be a dead letter. While South Koreans may no longer view North Koreans as being as part of themselves as they once did, they do harbor a preference for ethnic Korean migrants over those from Japan and China, despite the often-woeful levels of social capital and skills with which North Koreans arrive, as we’ve shown elsewhere.

While calls to alleviate discrimination or improve human rights for North Koreans may be appealing and important, they do not have the desired effect on public sentiment. The reality is that for a government policy in support of resettling North Koreans to be broadly accepted, it has to be economically advantageous and offer something “good for South Korea.”