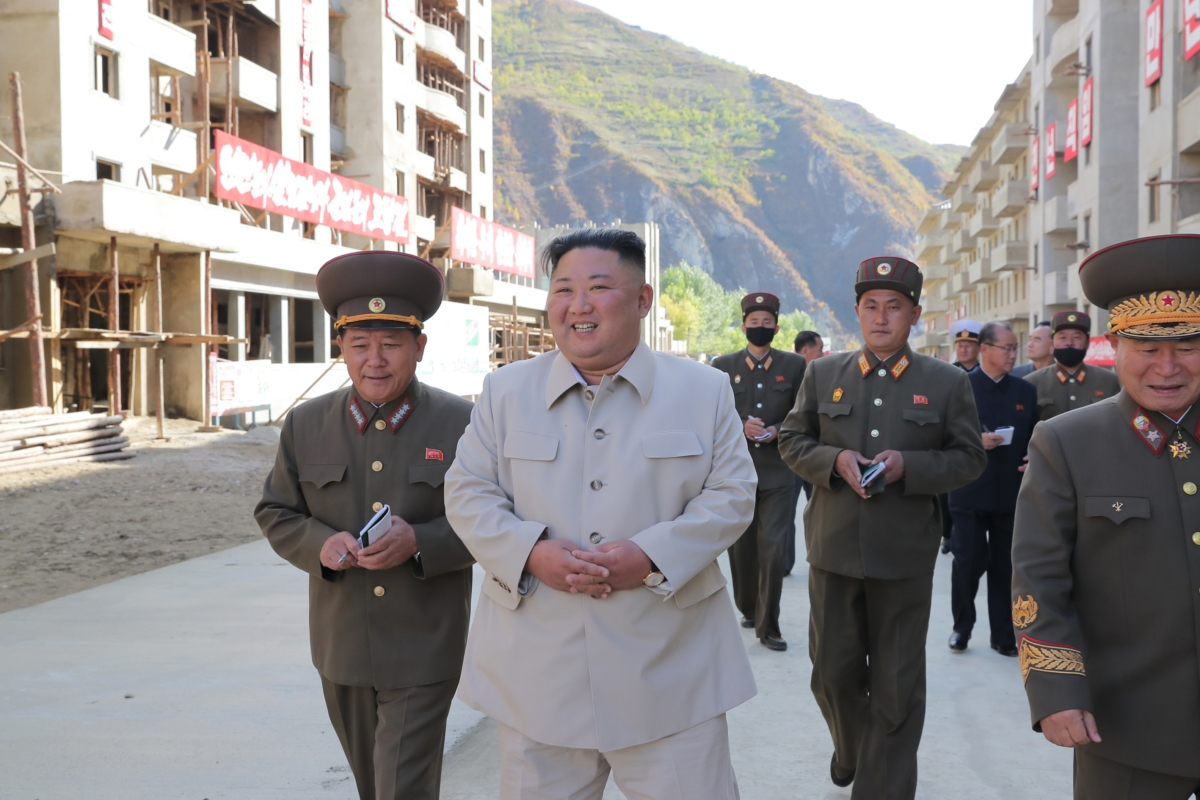 According to DPRK state media, the KPA personnel involved in recovery work “waged a 24-7 campaign in the spirit of carrying out the Party’s instructions unto death and of At a Go to fulfill over 60 percent of the total project of building more than 2 300 new dwellings in the Komdok area.”  Kim Jong said he could “see the damage done to the area was more severe than he thought” and he “highly appreciated the labor feats of the service personnel who completely removed the serious aftereffects and are pushing forward with the reconstruction project.” 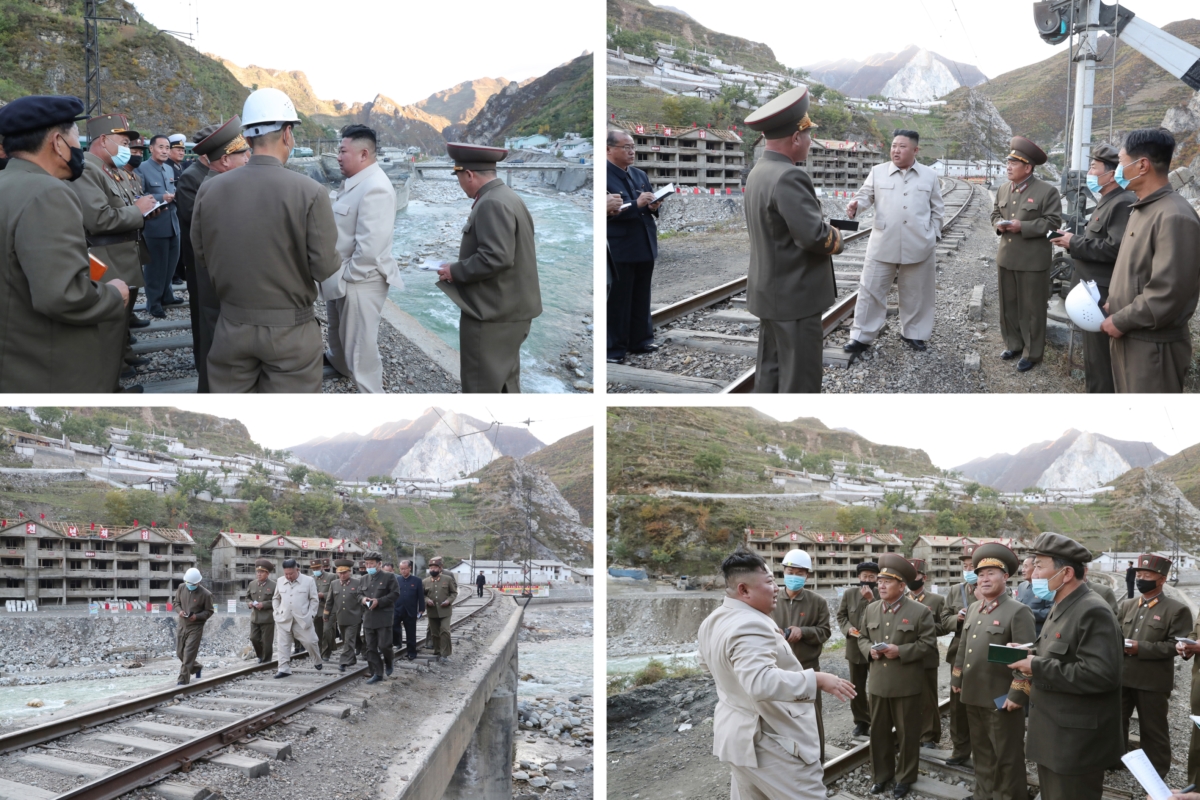 Kim Jong Un “spoke highly of the KPA units and sub-units involved in the recovery campaign in Komdok area as they are building firm retaining concrete walls by road stretches and railway sections exposed to potential danger of landslides, and doing qualitative river improvement so that there would not be damage by future natural disasters” and said that the “service personnel were dispatched to the reconstruction sites in different parts of the country to carry out the holy missions given by the Party Central Committee and are performing miracles like legendary stories about heroes.”  He added that “thanks to them the 75th anniversary of the founding of the glorious WPK could be celebrated successfully and the square of the celebrations could also be glorified more” and he “expressed his thanks to all the soldier-builders for displaying gallantry in the reconstruction campaign.”

KJU underscored the “need for the whole party and for the whole society to establish the trait of encouraging the struggle of the service personnel taking the lead in the restoration campaign, to send letters inspiring them and to render political and ideological aid to them so as to keep the high spirit.”  He was briefed about the KPA personnel’s clothing and food supplies and he underlined the “need to take good care of them as it is getting cold, to provide living environments of meeting the anti-epidemic requirements and to create the conditions for timely curing cases, if [there are] any.”

Kim Jong Un said that he “was so pleased to hear that the calamity-afflicted people could move into new houses by the end of this month, and stressed the need to take measures to supply food and daily necessities to those disaster-hit people and to take good care of them as they are living a hard life in public buildings and other people’s houses.”  He was reported to be very “unhappy to see the single-storied houses squeezed in a haphazard way at the foot of a mountain slope on his way to the reconstruction site” and remarked that “there are still houses built more than half a century ago and that we did not know properly the lives of the people living in so piteous environments and dwellings, although we thought of reconstructing houses for the disaster-stricken people.”  He stated that he “feels not relieved as we can not build new houses for them this time.”

We have to seriously self-reproach ourselves for making the workers in Komdok live in such a backward living environment because we failed to pay due attention to the living of the people there, though we claimed that the workers of Komdok are like the elder brother of the country and that the Komdok area is the major artery of the national economy.  If we shun such living conditions of the people in the local areas, our Party’s popular policies will be just an empty talk and be just like taking credit to oneself.  I would feel remorseful if only thousands of houses that had been affected by flood are rebuilt.

Current construction for recovery from damage should be set as the first-stage project which must be completed during the 80-day campaign with all-out efforts, stressing his pledge to build 25 000 new dwelling houses in Komdok Mining Complex, Taehu’ng Youth Hero Mine and Ryongyang Mine during the five-year plan which will be set forth in the 8th Congress of the Party as the second-stage project.

The Suryo’ng “gave detailed instructions regarding the direction of the construction in the Komdok area, pledging to take charge of the project himself and build, together with the People’s Army, mine villages in the Komdok area into the world’s best mining city, the world’s No 1 mountainous gorge city to be envied by all the people” and said that the KPA would “take full charge of building materials such as cement, steel and oil and build 5 000 dwelling houses each year from next year on an yearly basis, not reaching out for help to the national planning institutions which become very calculating, reel off complaints being caught in defeatism and make a great fuss when the target worthy of the political attention of the country is set.”

Kim Jong Un “advanced the task for the designing field to work out the master plan for the construction of the Komdok area during the 80-day campaign period” and he stressed the “need to conduct field survey before the designing, to set the site properly so that there would be free from natural disasters and wouldn’t be inconvenience in living, and to design the exterior and interior of the dwelling houses strictly based on the requirements of the people.”   He suggested “making harmonious combination of one-story houses and several-story, multi-story and high-rise apartment buildings in the Komdok area, calling for breaking the old style of building clusters of single-story houses in local counties and mountainous counties and for face-lifting the area so as to create another example, a revolution, in the local construction.”

KJU stressed the “need to do the good work of dredging beds of rivers and streams and embankment and put importance on forest and water conservation so that the area would not be affected by any floods and typhoons in the future” and he decided to “conduct this huge task believing in the People’s Army…the grandiose ambition and ideal of our Party will instill fresh confidence and hope to the people all over the country and become a spark of the 80-day campaign for opening up the period of new surge and great turn in our revolution.”

The Suryo’ng said that the “second hand of the clock of our revolution turns, keeping pace with the footsteps of the People’s Army and the speed of the latter is precisely the speed of the advance of our revolution.”  He called on the People’s Army to dash forward keeping step with the attack speed of our Party which doesn’t feel content in the work for the people and thus bring earlier the future of our country with nothing more to desire.”