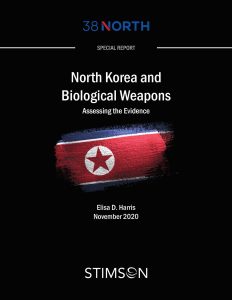 North Korea’s announcement that it is developing a vaccine for COVID-19 has focused renewed attention on Pyongyang’s purported biological weapons (BW) program. Over the past three years, three major news stories on the North Korean BW threat have been published in the United States, most recently by Politico in July 2020.

This report discusses what the two countries with the greatest security interests on the Korean Peninsula, the United States and the Republic of Korea, have said publicly on the issue over the past 20 years. It also examines whether the policy responses adopted by the two governments have been consistent with concerns that North Korea has an advanced BW program, as these media reports have claimed. Five themes emerge from this review:

In the final analysis, North Korea may once have had and may still be pursuing a biological weapons capability. It is also possible that North Korea never moved beyond R&D on biological agents and the establishment of a biotechnical infrastructure that could support future BW production. It is also possible that the North Korean program never moved beyond planning or, whatever its previous nature, the program has essentially ended. But one thing seems clear—nothing in the official public record to date indicates that North Korea has an advanced BW program, notwithstanding media reports to the contrary.