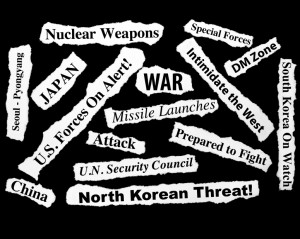 After German unification, the West finally had access to the secret archives of its former enemy. East Germany’s Ministry of State Security had committed acts that still keep courts and public opinion busy. The sheer degree to which the state had attempted to monitor, document and influence the actions of hundreds of thousands of its citizens was shocking to many. However, a second look often also revealed how incompetent and superficial even this most feared apparatus had been. Alas, it was not “the state” that collected and processed the information. It was individuals. Few of them, if any, were James Bond or Superman. Humans are naturally imperfect. They make mistakes and quickly reach their limits. Most of the time, they are plain boring.

With North Korea, it is pretty much the same. There is no such single entity as North Korea. “North Korea” is an imaginary construct that, in fact, consists of a large number of complex organizations and subunits. These, in turn, are nothing but a collective term for bureaucrats, officers, employees, farmers, artists, families—humans. True, there are a few visible and many invisible leading individuals who have a bigger impact on the actions of the group than others. Yet these are humans, too.

In a way, this is almost all we need to know to understand what is going on in North Korea. It is a complex human society where laws of social science apply just as anywhere else. Ironically, this seems to be too much to handle. As in our societies, decisions and actions in North Korea are sometimes based on planning and thorough preparation. Sometimes they are just the result of coincidence. Sometimes things proceed as planned, sometimes they don’t. Some decisions are right, others are wrong. Wrong decisions can sometimes produce the right result, and vice versa. Ideas about norms differ. Motives compete against each other. Sometimes one goal is pursued, sometimes another.

Understanding the actions and motives of others is always a game of guessing, even with people who are as close to us as our parents, a partner, or our children. We cannot look inside another person, so we try to assume that he or she is like us, driven by the same goals, making decisions based on the same preferences. Often, this is not the case; and apparent similarity can be treacherous. But if somebody looks different, speaks a foreign language, or behaves according to rules that we find strange, the conclusion often comes quickly and easily: this person is incomprehensible. This is not true either and apparent otherness can be misleading.

In this age of globalization, few societies are so “not like us” as North Korea. Or so we think, as few of us have actually met even a single North Korean. But why should we? People who do not speak English, have no internet, no mobile phones, and no cars, people who do not pray to any of our gods, who do not vote for their leader but rather accept hereditary succession are strange, different, a mystery.

“So what?” one might ask, let them be as they are. But curiosity drives us, and thanks to the atomic bomb, simply ignoring North Korea is not an option. Hence, there is a huge demand for information about “North Korea”—its motives and its policies. But supply is severely limited. So we try to bridge that gap by oscillating between two poles. We either regard the North Koreans as stiff, xenophobic, simple, naive, childish, racist, evil; they are just too abnormal and therefore impossible to deal with. Political correctness leads us to assume that it is not their fault since they have no realistic understanding whatsoever of the world. Just read their propaganda and you will see.

The other extreme is to regard the enigmatic North Korean system as some deadly, precise and superhuman machine that outwits us all. Every gesture, every word, every change of attire of Kim Jong Il has meaning. We are too stupid to see it but it is there, so we better find out. Whatever we do, he has foreseen it. There is no way that the emperor could be naked.

Sadly, none of this really improves our understanding of North Korea. The debate about the currency revaluation of late 2009 and early 2010 is one example out of many, as are studies about the “true nature” of the North Koreans. It seems to be too tough to accept that, as anywhere else in the world, reality in North Korea is colored in different shades of grey, but never in dark black or pure white. We long for simple explanations.

Our decision makers read executive summaries, or so we hope. The rest get their information from thirty seconds of television, or from newspapers with articles of 200 words or less. A “maybe” does not sell. It takes too long to explain, and is useless for making a decision or forming an opinion. Yes or no, this is what we want.

In the comfort of our offices and in anticipation of a lunch break or fancy dinner, we will have a heated debate about whether these statements are correct or not. We will form schools of opinion, denounce colleagues as apologists, reactionaries or amateurs, speak at conferences, write op-eds and give interviews. What we say does not really matter, as long as the answer is unambiguous.

There is only one thing that will hardly be accepted: a “maybe.” What a horrible word. A leader–an opinion leader–can be wrong at times but he shall in any case stand tall and lead, not being afflicted by doubts. “Maybe” means we don’t know. Maybe means we are incompetent. Maybe means we have not spoken directly to every single person in North Korea, to the planners, the decision makers, the consumers; that we haven’t checked all the data that nobody possesses. Maybe means we are guessing. Who would listen? Who would pay?

So we keep doing what we have always done. We assume and assert, reach brilliant and new conclusions, explain why our colleagues are wrong, or we just say what others want to hear. We continue to oscillate between the extremes as described above: yes or no. And we will most likely be wrong, but nobody will know. Nobody wants to know.

One day, when the North Korean archives are opened one way or the other, when veteran economists and politicians from Pyongyang publish their memoirs, we will finally be able to see how close we were on or off target—to no avail, of course. Historians will discuss whether the memoirs of a single official are really enough, how trustworthy oral history is, how time can shape memories, how diverse North Korea’s society and its decision making structure was “back then” in 2010 and how much is in the eye of the beholder. Some files will point one direction, others the opposite. And we will be reminded that reality and what is written in files is not necessarily the same. Few people will really care as all this will simply be an issue of the past.

There is nothing wrong with this. Having witnessed life in East Germany and the transformation that occurred after 1989, and having compared this to the often fundamentally different image of all this 20 years later, I have come to accept that life is such.

What does this mean for the understanding of current events in North Korea? Beware of extremes. If someone tells you “how they are,” think twice. Understand that North Korea is a human society that consists of some 24 million individuals who are not static but develop on a daily basis. Do not assume that North Korea is run by an evil computer or by an idiot, a monster, or a saint. Try to consider that the analyst who says “maybe” probably knows more than the one who confidently says “yes” or “no.” And don’t feel ashamed if you, in the end, ignore the former and rely on the latter. You will not be alone.