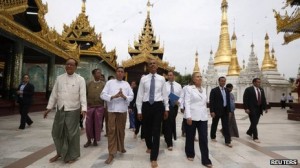 As Air Force One touched down for the US’s first state visit to Myanmar, newly re-elected President Obama already had one victory in hand. Hours before his arrival, Burmese President Thein Sein announced that he had approved the adoption of the International Atomic Energy Agency’s (IAEA) Additional Protocol, a measure which will likely also be approved in parliament. The move appeared extraordinary for two reasons. Just two years ago, Myanmar was alleged to be building a nuclear weapons program with the aid of North Korea, and Thein Sein was a member of the ruling military junta which brutally crushed opposition and thumbed its nose at the West.

The Additional Protocol grants the IAEA rights to expanded access to both information and sites. The goal is to increase confidence about declared, and possibly undeclared, nuclear activities. Thus, any “addition” to the Additional Protocol is a good one, but the victory in this case was hollow. Myanmar was about as close to a nuclear weapons program as Dr. (Bunsen) Honeydew and Beaker from The Muppet Show. In fact, more dangerous than the long-shot allegation of a Burmese nuclear weapons program, is the cash they provided to North Korea through their illicit trade relationship. In the end, North Korea may have simply been milking the Burmese for funds for their own nuclear weapons program.

Like most of the countries that bought into the “atoms for peace” agenda, Myanmar—then known as the Union of Burma—became attracted to the idea of a nuclear program in the 1950s and joined the IAEA in 1957. During its political and economic turmoil little progress was made toward this end, though it did reach out to Russia for a 10-15 megawatt research reactor to be used for radioisotope production. However, the deal fell through when the Russians realized that Burma’s safety culture was only slightly worse off than their total inability to pay.[1]

The story of North Korea and Myanmar’s alleged procurement activities is a strange one. The two countries suspended their diplomatic relationship in 1983 after North Korea attempted to assassinate South Korean President Chun Doo-hwan during a visit to Burma’s then-capital city Rangoon (now known as Yangon) killing prominent South Korean and Burmese citizens.[2] However, some dissidents claim that the two have acted as military procurement partners since the 1990s.[3] Officially, diplomatic relations were re-established in 2007, and around this time North Korea and Myanmar developed what appeared to be a cozy military-to-military relationship.

One bizarre aspect of the relationship involved harnessing North Korea’s know-how in an enormous tunneling project that ended up as nothing more than a lucrative boondoggle that took advantage of the Burmese junta’s paranoia. Nonetheless, the story was hyped by self-appointed experts such as Bertil Lintner and Desmond Ball as evidence linking Burma to a nuclear weapons program.[4] David Albright, Paul Brannan, Robert Kelley and Andrea Scheel Stricker vetted Lintner’s photographs of tunnels (one of which was actually a dam penstock) and “could not identify any nuclear industrial characteristics in the photos.”[5] Furthermore, an alleged uranium mill was in fact a cement plant.[6]

However, Burmese dissidents working to discredit the ruling military junta leaked a trip report and photos of a high-level Burmese visit to North Korea in 2008, with stops at various military facilities including a SCUD missile production factory linked to exports to Egypt, Syria, and Iran.[7] Gen. Shwe Mann, then a leader in the ruling junta, was photographed with North Korea’s Jon Pyong Ho, at the time head of North Korea’s nuclear and missile proliferation and procurement efforts, and infamously involved in the exchanges with Pakistan’s A.Q. Khan.[8] Jon has since retired, and Shwe is now speaker of the lower house of parliament in Myanmar.[9]

Additionally, several transactions involving dual-use industrial equipment occurred in 2008 and 2009. The items—cylindrical grinders and a magnetometer—can be used in a nuclear or missile program, and were procured by a North Korean front-company known as New East International.[10] While the items can make rare earth magnets for industrial applications, they are also useful for making those needed in a uranium enrichment gas centrifuge or the gyroscope of a missile. Some of the equipment made it to Myanmar, but Japanese officials uncovered the trade and prosecuted the CEOs under Japanese law.[11]

Meanwhile, the press became enamored with high-tension stand offs at sea between the American navy and North Korean transport ships thought to be carrying contraband to Myanmar, such as the Kang Nam I in 2009 and the M/V Light in 2011. The idea of catching North Korea and Myanmar in the act became irresistible front-page news after the embarrassing boarding of North Korea’s So San in 2002 to discover a then-legal hold of SCUD missiles and fuel bound for Yemen’s government, not terrorist organizations.

Burmese dissidents finally thought they had found their smoking gun, when former Army Major Sai Thein Win defected in 2010 providing photographs and testimony of an alleged nuclear program in Myanmar.[12] Sai’s photos and documents show procurement and indigenous production of equipment that could be useful in the nuclear fuel cycle. Analysis by Robert Kelley, a former American official at the IAEA and Ali Fowle grabbed headlines when they concluded that Myanmar’s “technology is only for nuclear weapons and not civilian use or nuclear power.”[13] While the media hyped a “new Burmese threat,” several researchers suggested alternative theories. Many questioned Myanmar’s need for a costly nuclear weapons program; others, including Kelley and Fowle, questioned the technical capacity of Myanmar.

My colleagues at the James Martin Center for Nonproliferation Studies examined some of the possible alternatives in a 2010 article in the Bulletin of the Atomic Scientists. Much of the dual-use equipment was usable in a conventional missile program, which would be a cheaper, more attainable, and immediately desirable goal for Myanmar.[14] It had secretly engaged North Korea for missile component procurement for more than a decade. Short- and medium- range ballistic missiles could be used as a “deterrent” against ethnic uprisings and neighboring countries alike. Some pieces of equipment were not useful in a missile program. We hypothesized that Myanmar might simply be a transshipment point for North Korea, which needs increasingly complex trade routes to evade sanctions. These routes can involve sea, air, or even diplomatic exchanges. North Korea was involved in similar schemes to illicitly transport equipment from China or Japan via large ports in South Korea, China, and Malaysia.[15]

The equipment and training that the Burmese received, however, is not enough to constitute a nuclear weapons program on its own. In fact, a new theory under investigation independently by David Albright and Jeffrey Lewis explores the possibility that items such as the unfortunately-named “bomb reactor” (a reduction vessel) and glove boxes are also useful in a program to extract rare earths.[16]

Rare earths are 17 different metals with applications that range from components for smartphones and other electronics to magnets in a Toyota Prius to medical treatment to cutting-edge military technology. They can be found almost anywhere, yet the process of extracting them is time consuming and challenging. In recent years they have become a necessity to many countries, yet only one—China—supplies 97 percent of the world’s market.[17] Myanmar has been wary of its patron to the north for some time, and there are plenty of customers—particularly Japan—who would like to buy their rare earth metals elsewhere.

No one can rule out the possibility that for a time Burma considered a bomb (or at least some of its more well-travelled scientists such as the infamous Dr. Ko Ko Oo), but it has become a case of Occam’s razor. Why would anyone prioritize an extremely expensive, technically challenging, and alienating nuclear weapons program, when they could invest in short-range missiles and a potentially lucrative stab at the rare earth market?

However, Myanmar’s role in the international community has changed significantly in the last two years. Democratic reforms, increased press freedom, and a gradual diplomatic opening to the West are encouraging signs. Those in power today still have many ties to the old regime, and human rights, particularly for ethnic groups in the north of the country, have faltered. Myanmar’s leaders have promised since 2010 that it abandoned any nuclear program, and maintains only “normal” diplomatic relations with North Korea.[18]

The US is embracing these new changes with visits by Secretary of State Hillary Clinton in December 2011 and President Barack Obama in November 2012. Officially, however, Washington remains cautious. In its 2012 compliance report, the US State Department said that it was encouraged by Burma’s efforts, but would “remain alert to any indications of Burmese nuclear weapons-related activities or intentions to develop a nuclear weapons capability.”[19] The guarded tone of the report may have much to do with the fact that as it was being released, Japan seized “50 metal pipes and 15 high-specification aluminum alloy bars” that were bound for Myanmar, and stamped with “DPRK.”[20] Like the previous cases, these items are considered dual-use—for industrial or military applications, including uranium enrichment or the development of missiles.

More transparency is still need in Myanmar. Ratifying the Additional Protocol and complying with the IAEA’s increased inspections and safeguards will go a long way to quashing the outside world’s remaining worries. Moreover, Myanmar should reinforce its commitment by demonstrating greater compliance with UN Security Council sanctions, particularly with regard to its trade with North Korea. But at the end of the day, the story of Myanmar’s nascent nuclear program and its developing WMD relationship with Pyongyang was based on little more than rumors and half-baked theories.