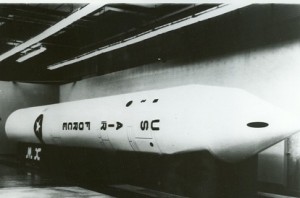 This is 1977 photograph of a mockup of an MX missile, later named the Peacekeeper.

We begin our discussion of North Korea’s Hwaseong-13 road-mobile, intercontinental ballistic missile with this image to make a point that should be obvious: It is not unusual for countries to build mockups or simulators of missiles as an early step in the process of developing new ballistic missiles.

Even if this missile is a “fake,” the MX program was very real. The United States would ultimately build 114 Peacekeeper missiles, which were deployed between 1986 and 2005. Ask former officials from the Reagan Administration, they will tell you these missiles helped win the Cold War.

Mockups or simulators provide important indications of future developments in foreign ballistic missile programs. The United States saw mockups of two new missiles near Taepo-dong in North Korean in early 1994, long before North Korea flight-tested the Taepodong in 1998 and the Taepodong-2 in 2006.[1] (The name of both missiles comes from this early sighting of mockups.)

It is important to keep in mind the value of assessing mockups when one hears that the six Hwaseong-13 road-mobile, intercontinental ballistic missiles paraded in North Korea in April 2012 and July 2013 were “fakes.” Real fakes, perhaps.

It is true that at least some of the missiles are mockups. Our colleagues, Robert Schmucker and Markus Schiller, noted many of the discrepancies among various missiles in 2012 parade. The missiles had features, such as fuel ports, in different places, were not secured to the transport-erector-launcher and sported warheads that appeared to be quite shoddily made.

Although small discrepancies still exist among the six missiles seen in 2013, the major differences in 2012 are no longer evident. The fuel ports are in the same, place, the missiles are properly secured and the pointy end is smooth and shiny. These are not simply the same missiles from 2012 repainted, despite some press reporting to that effect. A close look at the airframes reveals that the missiles in 2013 have many more rivets than those in 2012. And while such details are not, er, riveting, they are an important indicator that these are different from those displayed a year ago. (The missiles also have different serial numbers from those in 2012, although those could be changed easily.) The presence of rivets suggests that the design has stabilized.

Last year’s mock-ups were crude; the sorts of things engineers put together when they aren’t sure exactly how all the parts will fit together in three dimensions and want to try out various possibilities. No one in his right mind would rivet panels over the access ports when he is still working inside the missile mockup every day.

Most of the differences we saw last year, however, have disappeared and the designs have largely converged. The arrangement of welds and rivets is quite similar to what we can see on debris from the December 2013 Unha launch recovered by the South Korean Navy, with double rows of closely-spaced rivets running horizontally and vertically in the regions between the rocket’s stages. The access panels are now securely riveted in place. These are more like the sort of mock-ups engineers build when they are confident in their design, ready to start testing on the ground before committing to flight.

We disagree. We believe the missile mockups that North Korea displayed in 2012 and 2013 are consistent with an ongoing development program for a missile with limited intercontinental capability using only existing North Korean technology. There are a number of plausible configurations of missile engines that North Korea might use to cobble together a missile that would look like the KN-08. One of us—John Schilling—has written a lengthy technical analysis in Science and Global Security that considered six different ways that North Korea could assemble components and technologies it possesses into a missile that matches the appearance of the parade mock-ups. Not all of these solutions are elegant. For all we know, Werner von Braun is rolling in his grave. But elegant or not, these options are good enough to produce missiles with theoretical ranges from 5,500 kilometers to over 11,000 kilometers. The latter would allow virtually the entire United States of America to be reached from North Korean launch sites, making good on the threat implied by the Map of Death. Almost all of the configurations examined would be able to deliver a light first-generation nuclear warhead at least as far as Seattle. Of course, actual mileage may vary.

The most likely configuration, in our judgment, is a cluster of two Nodong engines for the first stage, with engines from the smaller R-27 for the upper stages. Such a missile might travel as far as Los Angeles or Denver—close enough to North Korea’s stated goals if we presume the DPRK’s missileers are perhaps too confident.

We can imagine other plausible configurations if North Korea has received more assistance from Russia than previously known. Norbert Brugge, a German rocket enthusiast, believes the Hwaseong-13 is based on a Soviet-era missile called the R-29 SLBM (SS-N-8 in the West). There is no specific evidence that R-29 hardware or technology has reached North Korea, but the North Koreans seem to have obtained other old Russian missile technologies and components from the same design bureaus. That North Korea has paraded a missile that appears to be the right size to use an R-29 engine may be a coincidence, or it could be something more.

The precise configuration of the missile is less important at the moment than the fact that North Korea appears to be moving to develop an intercontinental ballistic missile. It is strange that we are still discussing whether the North Koreans can build an intercontinental range ballistic missile—they’ve already done it. Last December’s successful satellite launch was about as technically challenging as an ICBM launch. As with Sputnik in 1957, North Korea was able to demonstrate the capability to build an ICBM while asserting that the launch was intended to further “peaceful use of outer space.” And as with Sputnik, North Korea’s Unha-3 space rocket is powerful but clumsy. For day-to-day military use, North Korean missileers will likely seek to use the same technology to build a missile that is a bit easier to move and hide than the Unha, but still able to reach the main enemy. Something like the Hwaseong-13.

The Hwaseong-13 is almost certainly is a missile under development, not an operational weapon. Some of the units in the last parade could have been flight prototypes, but North Korea has yet to fly them. While the North has been fairly aggressive in deploying new missiles with few flight tests, a system this complex needs to be tested at least once. It took four tries to get the Unha-3 to launch as satellite into orbit, and those were carefully choreographed peacetime launches. If Pyongyang tries to fire the Hwaseong-13 for the first time in combat, the result would probably be an embarrassing failure.

We can all certainly hope for an embarrassing failure out of North Korea’s nuclear arms program; it wouldn’t be unprecedented. But we ought to be prepared for a test of the Hwaseong-13 as well. Or a series of tests, starting with a failure or two before the North’s missileers eventually get it right. Given the advanced state of the mock-up hardware, the success of the Unha-3, and the reports of engine ground testing, the first flight test could occur at any time.

If, on the other hand, the whole thing is just a hoax, then why all the changes? Maybe North Korea’s engineers were so shamed by Schmucker and Schiller’s assessment of their work that they decided to put together a better set of mock-ups for this year’s parade. Maybe Kim Jong Un decided that three-tone camouflage is “so 2012.” The discrepancies among the missiles in 2012 were a source of embarrassment for North Korea. But if the parade models are repurposed engineering mock-ups, then we might expect each to represent slightly different configurations that converge over time.

Another question is raised by the “hoax” theory: Who are they trying to fool? Civilian wonks like ourselves may be puzzling over parade photos, but national intelligence services have satellites that can detect and measure rocket-engine testing. The United States intelligence community should know what kind of engines the North Koreans have tested and how powerful those engines are. And the Russians can do the US one better. The North has apparently been pilfering Russia’s storehouses for their own program. Presumably someone in Moscow has made arrangements for an inventory, as well as private chats with the Russian rocket engineers who’ve “vacationed” in North Korea. The Kremlin surely knows whether the Hwaseong-13 is real, despite public statements to the contrary.

The simplest explanation is usually the right explanation, and the simplest explanation here is that the Hwaseong-13 is exactly what it appears to be: A developmental road-mobile ICBM of limited capability but still able to threaten the continental United States. North Korea is parading mockups through the streets of Pyongyang because, like every other country, it built mockups first.

Jeffrey Lewis is Director of the East Asia Nonproliferation Program at the James Martin Center for Nonproliferation Studies, Monterey Institute of International Studies. John Schilling is an aerospace engineer working for the Aerospace Corporation as a specialist in satellite and launch vehicle propulsion systems.