If you study relations between North Korea and the United States, you’ll spend a lot of time reading propaganda, trying to parse phrases for evidence of internal political disputes or perhaps to discern a subtle shift in policy. It can be a chore to sort through the immense amount of tendentious nonsense coming from one the world’s least transparent governments, trying to figure out exactly what the heck they are thinking. 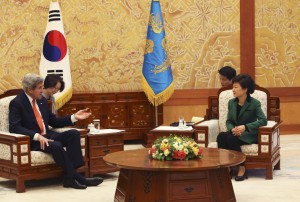 Case in point: The recent talking point about “translating denuclearization from a noun to a verb” used to frame US Secretary of State John Kerry’s trip to Asia.

Oh, you thought I was talking about North Korea.

No, no—I’ve long given up on understanding the North Koreans. I mostly busy myself with the Obama administration and what its policy is toward North Korea, assuming there is any at all.

Frankly, things seem to have been on autopilot since the collapse of the 2012 US-North Korea Leap Day Deal. They don’t want to do that again, understandably, but since negotiating with the North Koreans is usually the least of a series of very bad options, nothing else really recommends itself either.

Some of the drift can be explained by the challenges the White House has faced in explaining its effort to “rebalance” toward Asia. (Although I don’t love the metaphor, I think most of the handwringing about what used to be called the “pivot” is misplaced.) Even if you think the rebalance deserves more credit than it has received, the communications strategy has been, well, uneven.

And the drift on North Korea policy is real. Despite the happy face put on for press coverage, the David Sanger piece in the New York Times would seem to suggest the recent meeting in New York City between US North Korea Special Representative for North Korea Policy Glynn Davies and his Chinese counterpart Wu Dawei went badly.

All the propaganda out of North Korea seems to suggest they’ve written off talking to Washington.

Since the collapse of the Leap Day Deal, the Obama administration has yet to articulate a sense of what happens next. President Obama hasn’t even bothered with the time-honored tradition off empaneling a Commission. Bill Clinton, at his most irritated with Kim Jong Il, let Bill Perry invent the Perry Process. Although the Perry Process looked surprisingly like the old process, the great man’s imprimatur seemed to do the trick—for a time. This administration, by contrast, conducted “a recent effort … to devise a new approach” that, according to Sanger, concluded, “all the alternatives to the current course were worse.”

So, instead of a new commitment to meeting the challenge posed by North Korea’s strategic capabilities, we have officials hitting the rubber chicken teriyaki circuit in Asia and giving interviews—more often than usual, in my admittedly impressionistic accounting. I get the sense that the busy work reflects the fact that not much is happening behind the scenes. The joke around Washington is that the number of US officials visiting Korea is an inverse indicator—the more they visit, the less that is happening back in Washington. If anything at all is going on behind the scenes, one has to parse the statements very carefully to see any hints of it.

Which is how I ended up staring at State Department Official One’s enigmatic comment that “We are embarked in an effort to translate denuclearization from a noun to a verb.” Um, ok.

I don’t know where the quote is from, but my top Google result is “love is a verb not a noun,” from a book by Susan Forward called, When Your Lover Is a Liar: Healing the Wounds of Deception and Betrayal.

So it’s come to this? Policy planning based on a self-help book that offers “all the communication and behavioral techniques you need to deal with a lover’s lies, telling you exactly what to say, when and how to respond to his reactions, and how to present your requirements for staying in the relationship.”

Gee, and I thought the problem was Obama’s team was too cynical. I didn’t know the President’s feelings were hurt!

In all seriousness, its clear the Obama administration is putting its efforts behind negotiating a deal with Iran, shoving North Korea onto a back-burner. There are hints of this in the remarks of one senior official in the Sanger piece: “You could argue that the best North Korea strategy now is to get a deal with Iran,” a senior official told Sanger, “and use it as a model for the North about what the world can look like.”

I know, we’re doomed. (By the way and for the record, the Bush administration tried that with North Korea and Libya. Don’t ask.)

The problem is that North Korea isn’t going to wait to see how negotiations with Iran shake out. When Obama came into office, his priorities were getting out of Iraq, stabilizing Afghanistan and engaging Iran. The North Koreans just shoved their way into the conversation with a nuclear test in 2009. The North Koreans can make plenty of trouble, particularly as their nuclear and missile capabilities grow.

The Obama administration, however, seems to be downplaying North Korea’s growing capabilities. Now, I don’t want to encourage the usual crowd of ideologues and crazies accusing the administration of “suppressing” information. That’s just partisan sniping.  But many of us—not just the Obama team—have been slow to recognize North Korea’s growing capabilities. It is too easy to think of North Korea’s nuclear program as it was in the 1990s—a bargaining chip to secure hard currency, food aid and the occasional summit. But that was twenty years ago. (That feels odd, even as I type it.)

Many of us have yet to come to grip with how far North Korea’s nuclear program has come since the 1994 Agreed Framework collapsed early in the Bush administration. Sig Hecker recently visited the Center for Nonproliferation Studies, where I work, and gave a talk that looked at the past decade starting with his first visit to North Korea in 2004 when he held a glass jar filled with a few grams of plutonium, probably a pretty fair fraction of North Korea’s fissile material stockpile. What I found interesting about Hecker’s talk—and you can watch it online—was his emphasis on that fact that slowly, but steadily, North Korea has expanded its nuclear weapons programs during the decade he’s been interested in the topic.

When the Agreed Framework collapsed in 2002, experts worried that North Korea would restart plutonium production, complete facilities to enrich uranium and test a nuclear weapon. Today, North Korea has done all those things and more. North Korea has conducted three nuclear tests, two of which were successful. After several tries, North Korea has placed a satellite in orbit using the Unha (Taepodong-2) rocket. North Korea claims it has miniaturized a nuclear weapons for missile delivery and at least some folks at the Defense Intelligence Agency seem to agree. As my colleague Josh Pollack has noted, North Korea has developed many generations of machine tools as part of the campaign to master technologies like rocketry and uranium enrichment.

Continuing to ignore North Korea means it will continue to increase the number of nuclear weapons, test new intermediate- and intercontinental-range ballistic missiles and ultimately develop more reliable warheads with higher yields. The longer we do nothing, the worse the situation gets.

And that is the bitter irony of the US talking point about translating denuclearization into a verb. The North Koreans are way ahead of us translating nouns into verbs—just not the ones we want.