Recent commercial satellite imagery indicates that North Korea has completed a major construction program begun in late 2013 to upgrade the Sohae Satellite Launching Station. A key component of that program has been to upgrade an existing launch pad, enabling it to launch rockets larger than the existing Unha-3 space launch vehicle in the future.

North Korea is now ready to move forward with another rocket launch. Should a decision be made soon to do so in Pyongyang—and we have no evidence that one has—a rocket could be launched by the end of 2014. The most likely candidate remains the Unha-3 SLV, last tested in December 2012, since a much larger rocket, reportedly under development, is at least several years from becoming operational.

Continuing activities on the ground at Sohae merit close watching. Imagery from mid-September spotted tanks near the propellant storage buildings at the launch pad for the first time since the 2012 launch. The exact purpose of this activity remains unclear.

Recent imagery also indicates that Pyongyang conducted another engine test in early August of the rocket motor used in the KN-08 road-mobile intercontinental ballistic missile (ICBM), part of a series begun in early 2013. It remains unclear how successful these tests have been. However, rocket motor tests are typically conducted prior to full-scale test launches of a missile that precede a weapon becoming operational.

Recent commercial satellite imagery indicates that North Korea has completed a year-long program to upgrade the facilities at the Sohae Satellite Launching Station (Tongchang-ri). The garrison and support base for the main construction unit—built in summer 2013—was completely dismantled between August 11 and September 4, 2014. Beginning in August, 21 small shelters were removed. By September 4, 12 larger buildings had also been dismantled. Rail cars, probably used to transport the unit and its equipment to another site, are present at the rail siding. Ten freight cars were parked just north of the rail siding on August 8. Three days later, only five were present, and by September 4, none.

Figure 1. Support area for the main construction unit has been dismantled. 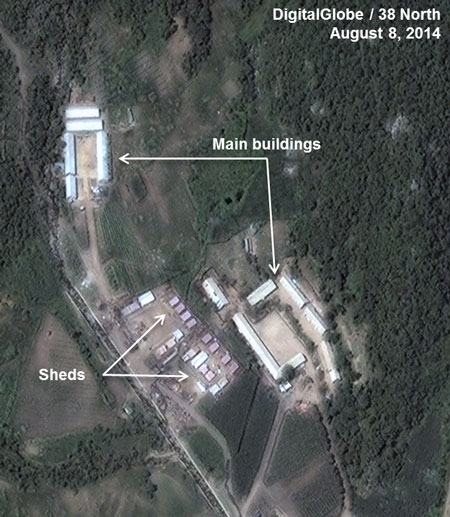 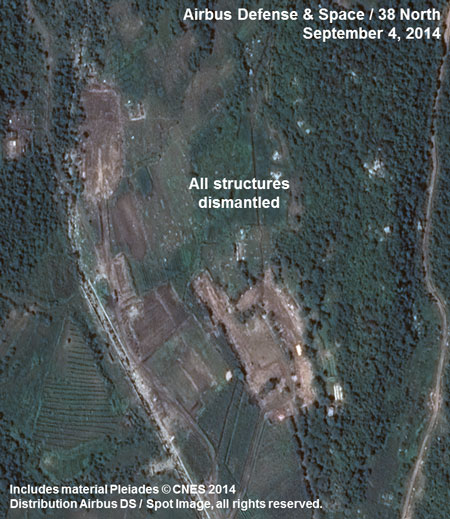 A key part of the construction program was modifying the gantry tower and launch pad to handle space launch vehicles (SLVs) larger than the Unha-3 SLV. The gantry tower was raised to 55 meters by adding three new platforms to handle rockets up to 50 meters in height. The North is reported to be developing such a new rocket although information on its specifications remains sketchy. Nevertheless, work at the site seems to confirm that a new DPRK system will use the same fuel and oxidizer as the Unha SLV since there were neither modifications made to the existing propellant tanks nor additional plumbing added on the pad.

In addition, swivel arms containing work platforms—installed at the gantry’s top and bottom that surround the rocket until just before launch when they are retracted—as well as new environmental covers to provide an improved ability to both hide and protect the rocket as it is being checked out on the pad.

When viewed on September 13, painting of the tower was in progress with the new metal parts probably covered with a rust resistant primer and the machinery at the top painted yellow. The solid coverings for the swing arms on the east side of the tower have been removed and are being spray painted white on the pad near the gantry.

Access to the pad was also improved with the construction of a new wider access road. A 120 m railroad tunnel was constructed alongside the pad that connects with the new 1.4 km rail spur coming from the rail siding, but the tunnel remains incomplete. 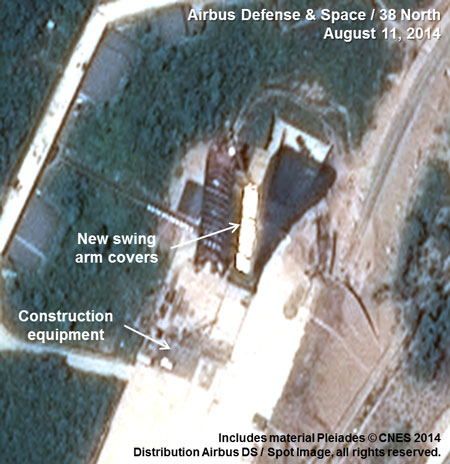 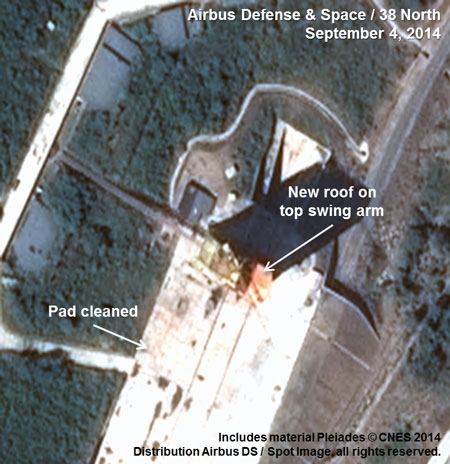 With the completion of work, North Korea is now ready to move forward with another rocket launch should a decision be made in Pyongyang to do so. If such a decision were to be made soon, a rocket could be launched by the end of 2014. The most likely candidate is the Unha-3 SLV given that the larger rocket mentioned above is still in development.

Moving forward with preparations would of course require a political decision by Pyongyang. There is no evidence that such a decision has been made. Nevertheless, activities on the ground at Sohae merit close watching. Imagery from mid-September spotted tanks near the propellant storage buildings at the facility’s launch pad for the first time in the two years since the Unha-3 SLV was launched in 2012. There are two possible explanations:

Figure 4. Tanks seen near the storage buildings at the Sohae launch pad. 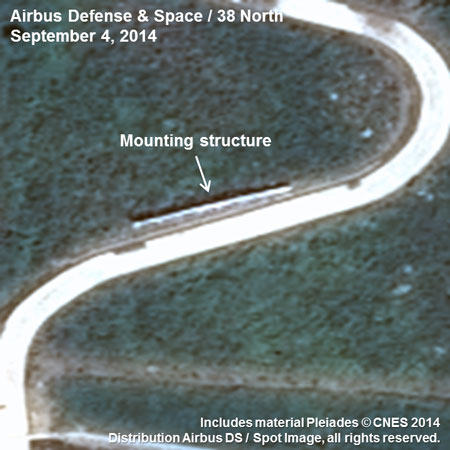 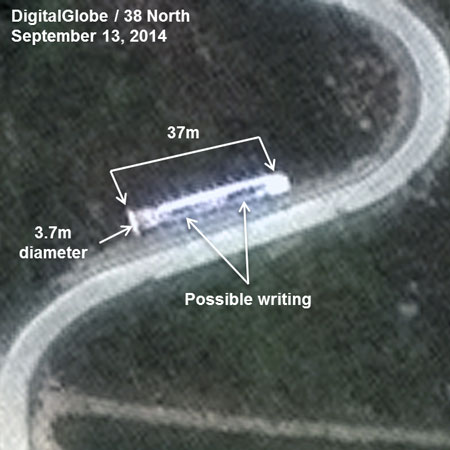 Another Engine Test for the KN-08

Imagery from August 11 indicates that North Korea probably conducted another test of the first stage motor for the KN-08 road-mobile intercontinental ballistic missile (ICBM). While there was no activity at the test stand or fuel or oxidizer tanks present on August 8, three days later a KN-08 first stage is visible on the test stand along with three other objects. Two cylindrical objects, a probable crane and several unidentified items are on the ramp to the test stand with fuel and oxidizer tanks just off to the sides.

Two features indicating a test may have recently taken place are: 1) the doors in the front of the stand are open, the first time they have been seen open on available imagery. It is necessary to open these doors to place the engine inside and to remove it once the test is completed; and 2) the vegetation in front of the flame trench is distressed (burned). The cylindrical objects on the ramp may be the means by which the engines are secured inside the stand.

By September 4, there is no activity at the stand with several of the vehicles related to the KN-08 engine test program—including prime movers probably used to carry the rocket stages—previously at the north end of the missile assembly building now parked at the southern end.

Figure 7. No activity on the engine test stand in early August.

A reexamination of imagery from early July 2014 has indicated the presence of two sets of rail cars seen only once before at Sohae—about 23.5 m long—parked on the inactive track at the south end of the rail siding along with two more common cars, each 10.5 m long and about 3.2 m wide.[1] Their exact purpose remains unclear but may include the following: 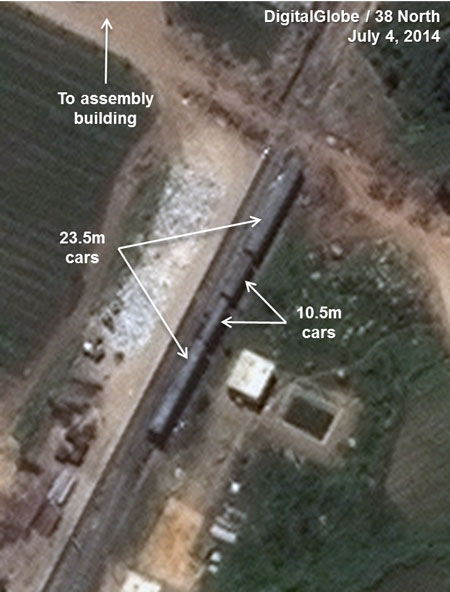 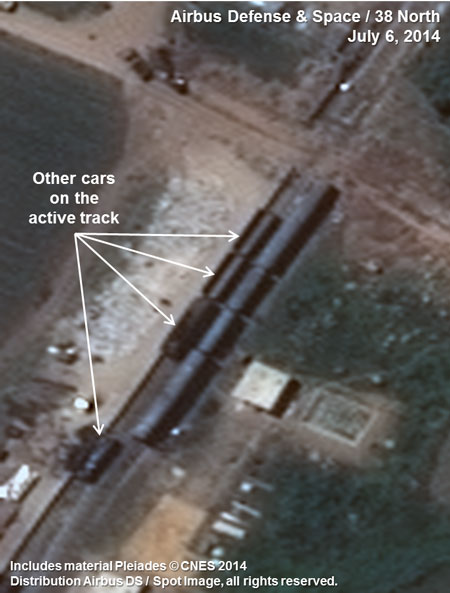 It has been almost two years since North Korea launched the Unha-3 SLV intended to place a satellite in orbit. With the completion of construction activities at Sohae, particularly the modification of the gantry tower and launch pad, the North seems ready to resume activities at this site. If the political decision was made tomorrow—and of course no one knows whether it will or not—Pyongyang could conduct a new Unha launch by the end of the year.

Beyond space launches, it remains an open question whether Sohae will soon see additional activities related to the development of North Korea’s mobile intercontinental ballistic missile. Tests of the KN-08’s first and probably second stage rocket engines have been ongoing at the site for at least two years. That may indicate any future activities, including full-scale tests of the missile will be conducted at Sohae. While there are other possible indications they remain inconclusive. When the KN-08 engine test program is completed, it is likely that tests of engines for the new larger SLV under development will also be conducted at that site. (To date, there isno evidence engine tests for this rocket have taken place.)

[1] The first and second stages of the Unha-3 SLV—measuring 15.4 m long, 2.4 m in diameter and 9 m long, 1.5 m in diameter respectively—would fit inside the cars. Also a fully assembled KN-08 ICBM—measuring 17 to 18 m in length—could also be carried by the longer rail car.