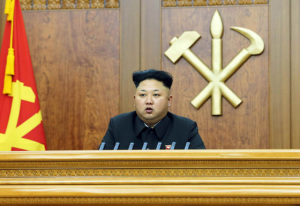 As surely as a new year follows the old, North Korea’s New Year’s Day message is scoured for signals of regime intent to reform and moderate its provocative behavior. Passages that are less vituperative than the preceding year are hailed as harbingers of peaceful engagement.

Despite these inevitably rosy pundit predictions, there is less than meets the eye in the regime’s annual missive. Pyongyang has repeatedly demonstrated over the years that its policies reflect far greater continuity than change. Imminent North Korean economic reform has been predicted for decades, only to repeatedly suffer a Waiting For Godot fate.

Media coverage of Pyongyang’s 2015 speech is replete with headlines of Kim Jong Un advocating a summit with Seoul as part of a “big shift” in policy. The North Korean leader did indeed state that “we think that it is possible to resume the suspended high-level contacts and…there is no reason why we should not hold a summit meeting.”

But context is critical in interpreting North Korea’s New Year’s communiqués, both in examining the entirety of the text and in Pyongyang’s subsequent actions. Journalists inevitably cherry-pick positive-sounding passages but neglect surrounding passages that make all too clear the conditionality of North Korea’s offers.

Kim Jong Un’s 2015 speech reflects long-standing North Korean themes, including resistance to political and economic reform. In addition, Kim blames, as has been the case in previous years, “anti-reunification forces of South Korea,” “outside forces,” and annual US-ROK military exercises as “the root cause of the escalating tension on the peninsula.” Pyongyang conveniently neglects to mention its acts of war, threats of military attack and repeated violations of diplomatic agreements, international law, and UN resolutions.

A careful reading of the New Year’s speech also shows the conditionality of Kim’s diplomatic outreach. He declares, “there can be neither trustworthy dialogue nor improved inter-Korean relations in such a gruesome atmosphere in which war drills are staged against the dialogue partner.”

So, Pyongyang suggests that inter-Korean dialogue is possible, if allied military exercises are called off, South Korean authorities show they “are sincere in their stand towards improving inter-Korean relations through dialogue,” and “if the atmosphere and environment for it are created.”

In earlier declarations, Pyongyang was far less critical of the US in its 2009 New Year’s remarks, generating expectations of an impending breakthrough with the incoming Obama Administration. Instead, Pyongyang unleashed a series of provocations, including missile and nuclear tests, abandoned the Korean War armistice, and threatened war against Washington and its allies.

The more muted criticism of South Korea in Pyongyang’s 2010 New Year’s message was depicted as portending a thaw in inter-Korean relations. Instead, Pyongyang twice attacked South Korea, killing 50 by sinking a naval vessel in South Korean waters and shelling a civilian island.

In its 2011 New Year’s message, North Korea called on South Korea to abandon its military exercises and five days later the regime declared it was ready to resume “unconditional and early opening of talks [and] meet anyone anytime and anywhere, letting bygones be bygones.” The initiative was premised, however, on Seoul refraining from “any act of provoking [in order] to create an atmosphere of improving the inter-Korean relations.”

In 2013, Kim Jong Un’s calls to “end the division of the country” and “remove confrontation between the north and the south” were held aloft as evidence of a less belligerent policy. Instead, within three months, Pyongyang revoked “all agreements on nonaggression reached between the North and the South,” declared inter-Korean relations had “entered the state of war,” put its artillery and rocket forces on the highest alert including against targets in South Korea, and threatened to turn the South Korean presidential residence into “ashes.”

Predictably, Kim Jong Un’s 2014 New Year’s Day pleas to his “compatriots in the south” to create a “favorable climate [for] improved relations between the north and the south” were interpreted by some as a North Korean desire for rapprochement with Seoul, despite having threatened the previous year to turn Seoul into a “sea of fire.” Indeed, one western analyst even interpreted it as “signaling that [Kim’s] prepared to start off with something concrete, if modest, in order to open the door” with South Korea.

North Korea is apparently a land of “signals,” where every action, good and bad, is a clever regime portent of change. But, as Sigmund Freud was reputed to have said, “Sometimes a cigar is just a cigar.” If North Korea’s various gestures are meant as signals, they’re not very good since they are imprecise, ambiguous, and subject to misinterpretation. Signals work when both sides know what they mean—semaphore code and a military salute are effective non-verbal communication only because they are known entities.

Western experts have a long history of overeagerly embracing North Korean “signals.” A former US ambassador to South Korea gushed that the New York Philharmonic’s 2008 concert in Pyongyang was “firing a 16-inch broadside of soft power into the hearts and minds of the North Korean people.” Some experts even point in Sherlock Holmesian fashion to the dog that didn’t bark, i.e. the signal North Korea sent by not saying something.

Naively optimistic interpretations of North Korean statements have a long track record in Washington. But none of the many attempts at engagement with Pyongyang have led to the slightest political or economic reform, abandonment of the regime’s 50-year quest for nuclear weapons, or reduction of threats.

But there is a danger in the media’s misinterpretation of Pyongyang’s supposed messages, since it creates false perceptions of dramatic policy reversals. This, in turn, can generate pressure on Washington and Seoul to respond to these “signals” by offering new concessions to induce Pyongyang back to the negotiating table.

If North Korea wants to signal its desire for renewed dialogue, it could cease threatening the US and its allies with nuclear attacks, stop violating UN resolutions and international law, and affirm its pledge to abandon its nuclear weapons programs.